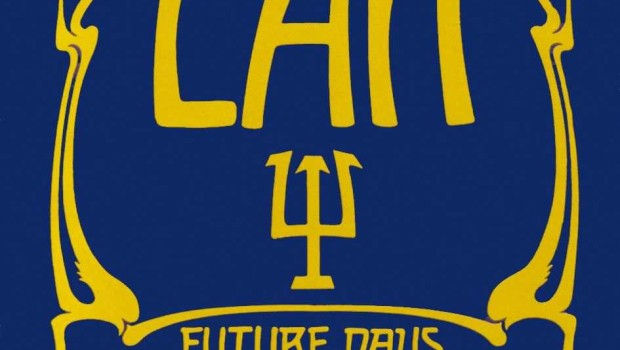 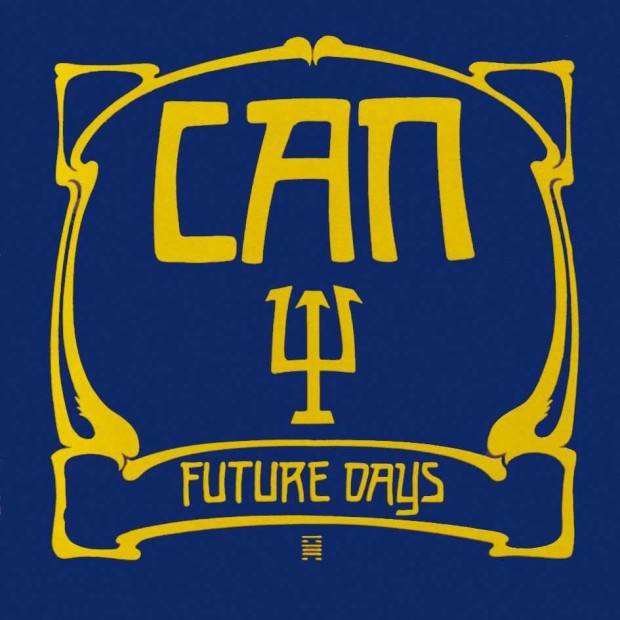 This may seem a pretentious review. It probably is.  I may well be using words like “oneiric”*, a word that spell-check tells me doesn’t exist. This is to be expected: this is a Can record I’m talking about, the band I‘m most likely to wax lyrical about, especially when they’re at their least lyrical. This is Future Days, Can at their most impressionistic, most painterly, least literal. Moving on from the pop certainties of Ege Bamyasi, (‘Spoon’, adopted as the theme tune for a detective series, had been an actual chart hit in Germany!) the band decided to break free of those structural niceties and explore more organic fields. If you can imagine an organic field.

We drift in. The record begins with the sound of murmuring, lapping water. There are a couple of discordant synth parps just to keep you on your toes as you wander up the beach over the pristine white sand. Bubbling melodic bass and Jaki Liebezeit’s gamelan drums shimmer in and a choppy, phased guitar, birdsong and what appears to be Yma Sumac, all appear, woozy as a mirage. In describing it the song sounds dense and cluttered, a series of hurdles to be met, but the playing is delicate, pared back, restrained. And then suddenly the haze of that fuzz guitar lifts and you’re staring up at azure skies and Damo Suzuki’s voice drifts in on the breeze, all mumbled contentment, still half asleep. “You hide behind a borrowed chase/for the sake of future days”.

The playing is endlessly playful, instruments dipping in and out of the mix, the song’s dynamic swelling and surging, before banking down again. Irmin Schmidt’s keyboards dapple the sound-scape with whooshes and smudges, blurring and smearing the production. Damo’s voice returns, tiny and high-pitched beneath the see-sawing guitars, he shrills like David Hedison at the end of ‘The Fly’.

That’s quite the statement of intent but if anything the second song, ‘Spray’, is even more adventurous. What instrument actually makes the noise that starts ‘Spray’? It’s a mellifluous burp! Holger Czuckay’s bass on this song is everything and nothing, treading water before fizzing off on peculiar loping bass runs. Percussion is everywhere, marimbas rise up through the spume, Leibezeit’s impossible drums playing everything at once, but there is no sense of motion or at least propulsion: this music is about immersion, about being borne away by the tides, surrendering to this whirlpool of noise. This is a defiantly sub aquatic record: it is the one that will come flashing before you as you drown, going down for the third time. Damo’s first cry – three minutes in – is exactly that: a short disembodied wail, drifting across the water.

At the four and a half minute mark everything drops away except Holger’s hacky-sack, keepy-uppy bass and the faint echo of Karoli’s spume flecked wah wah guitar and suddenly we’re floating again. There is an endless sense of liberation with this record and this is reflected in Suzuki’s singing. Previously there was an intimacy to his pop pretty vocals, in stark contrast to previous incumbent Malcolm Mooney’s stentorian bellow. But this was Suzuki’s last record (he left the band to marry a Jehovah’s Witness immediately after making it) and he sounds like he’s already half gone. His voice flits through the songs, gossamer light, adrift on the breeze like dandelion spores.

‘Moonshake’ was the single and sounds like it, as we lock into the sort of solid Motorik groove we haven’t heard from Can since ‘Mother Sky’. Damo’s a bit more centred on this one too, as imploring and seductive as he had been on ‘I’m So Green’. “Better say no more,” he croons, “woh, woh, woh, woh,” There is a brilliant squonking sax in the background and the middle-eight breaks down to what sounds like soft toys being hit with toffee hammers. It’s comic relief for the album’s big finish, the twenty minute tour-de force that is ‘Bel Air’.

And it’s all here: all of Can is in ‘Bel Air’; it is a microsmic comic, sensual and essential. It starts with a high, trebly guitar and mellotron flutes, but Damo is on it sooner than usual, guiding the musicians along, his sing song voice perfectly attuned to Czukay’s two note bass line and Karoli’s frothy wah wah.  And then we’re plunged back into the eye of the maelstrom: banks of synthesisers surge, guitars skirl, percussion splashes left and right and the singer is just along for the ride, surfing the white water, beyond language, unable to utter anything beyond a long joyous “Woooooh!”

It all falls away, the tides retreat and you’re dragged up on the beach of another green world. Birds of paradise chirrup overhead as you lie there, exhausted, salt-baked, lost to your oneiric drift. Wow. That one really did get pretentious.  I don’t care – the day that this record fails to move me to paroxysms of hyperbole is the day I hang up my headphones. Future Days is brilliant. Actually forget the rest – that’s the review right there. John Higgins

*I did use oneiric. Yes.