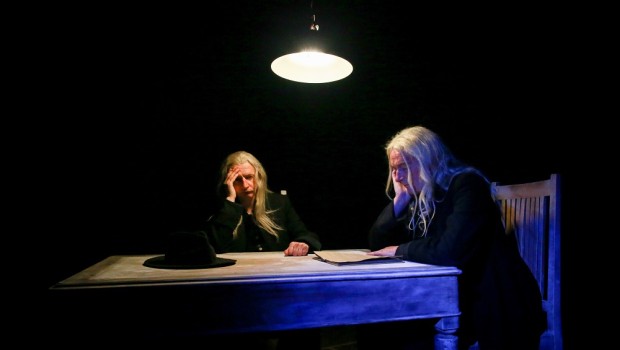 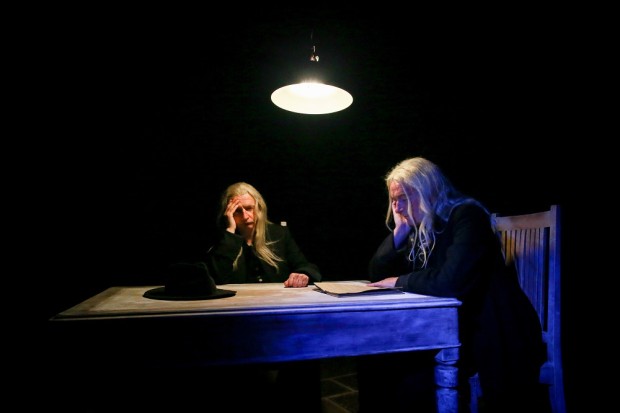 The legend on the sign reads ‘The Captain’s Word is Law’ and so it is on the boat ferrying a group of Beckettphiles to Devenish Island for a sunset performance of Ohio Impromptu. When it comes to Samuel Beckett’s plays, however, even beyond the grave Beckett remains very much the captain, with his estate watching closely for any interference with the meaning or spirit of the work.

However, as director Adrian Dunbar demonstrated last year with Catastrophe – his striking directorial debut of Beckett – following Beckett’s guidelines is the surest way to success. “If you start fiddling around with the score,” says Dunbar, “you’ll very quickly find that the music falls apart and so it is with Beckett.”

Where the Happy Days Enniskillen International Beckett Festival leaves its own indelible stamp on Ohio Impromptu is in the imaginative setting in which it is staged. It’s not just the boat journey to Devonish, as day gradually surrenders to night, but the symbolism of the island itself that makes it such an atmospheric theatre for Beckett’s somber playlet.

Devonish – a sixth century monastic site and former place of pilgrimage – has gravestones dating to the 11th century. Some of the headstones are engraved with skulls, crossbones, hourglasses and bells, none-too subtle reminders – now as then – of our mortality. An angel’s head on several stones signifies the soul of the dead leaving the body and rising to heaven.

It’s been one hundred and fifty years since the last burial on Devonish but the spectre of death is much closer this evening in Beckett’s play dealing-obliquely enough–with the mysteries of death and the pain of bereavement.

In a small stone-and-slate-roof building the audience of twenty sits in the dark. A light comes on to illuminate a table directly in front where two old men sit, as still as an oil painting:  one at the table’s long side facing the audience, with head bowed; the other at the top-right end, his face obscured.

Both have long grey hair and are wearing long black coats – mirror images of each other. A single, wide-rimmed black hat rests on the table.

“Little is left to tell…” the reader (Vincent Higgins) begins, each word carefully weighed. The listener (Frankie McCafferty) raps his knuckles sharply on the table, interrupting the narrative, which continues after a pause and a softer rap. For fifteen minutes, the narrative unfolds thus. Reading. Table rapping. Repeating of the last line.

The story – what remains of it – reveals that the death of a loved one (presumably the ‘listener’s partner) forced the widow to seek relief from his pain by moving from “the place where they had been so long together to a single room on the far bank” of the Isle of Swan. [Suddenly, the small room by the shore of Lough Erne assumes a sympathetic quality that a conventional theatre could never capture].

Instead the ‘listener’ could be seen slowly pacing the island, day after day, hour upon hour, retracing his steps, in all weathers. The dead comes to him in his dreams, warning him to stay where they “had been so long together.” The ‘reader’ asks if the ‘listener’ could not yet turn back to where he had once been with the departed..

At this point, the ‘reader’ and the ‘listener’ appear to be one and the same person, or perhaps the ‘reader’ is an apparition of a mind broken by grief.

Night terrors and insomnia accompany the ‘listener’ in his new, unfamiliar surroundings. The ‘reader’ appears again and again to read “the sad tale”, disappearing silently each time with the dawn. And without ever exchanging a single word “they grew to be as one”.

One day the sad tale was told for the last time. “Nothing is left to tell,” the ‘reader’ intones heavily. The ‘listener’ raps the table, the sentence is repeated. A softer rap follows, but this time the tale has run its course and silence reigns. The two sit on as though turned to stone.

The grief and isolation of the ‘listener’, the weight of loss and loneliness, memories stirred and questions unanswered are themes that preoccupied Beckett in the autumn and winter of his years. Ohio Impromptu echoes the inner dialogue of the characters facing death in the darkly comic Company and foreshadows the themes of mortality in the altogether starker Rockaby and poignant Stirrings Still, Beckett’s final piece of prose.

Yet the stillness of the mise-en-scène, the lulling tone and rhythms of the ‘reader’s voice and the sense of acceptance perhaps implied in the end make Ohio Impromptu a gentler mortality play than others in Beckett’s oeuvre. Dunbar’s nuanced direction, commanding performances from Higgins and McCafferty and this uniquely atmospheric setting together succeed in creating a quietly compelling drama. Ian Patterson