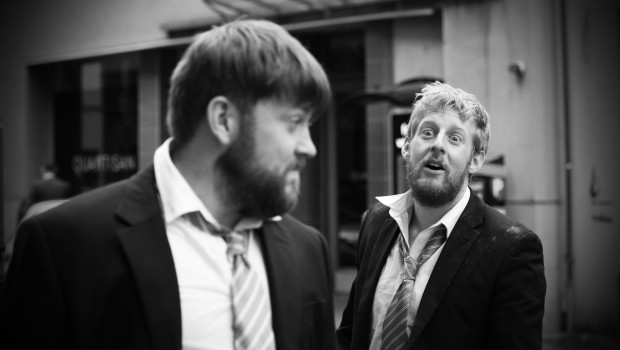 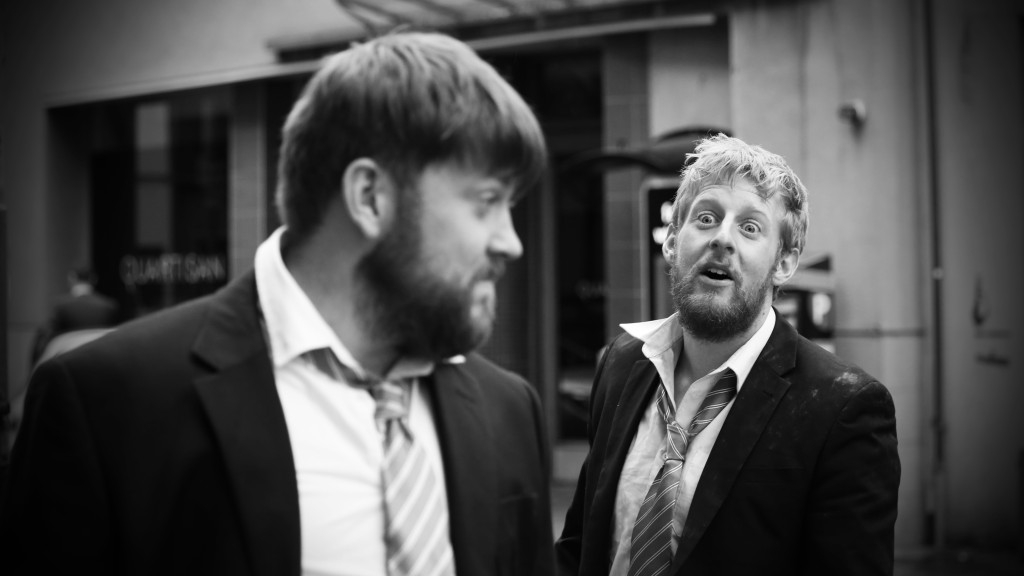 Stills from How these Desperate Men Talk

Hi guys. How did you start working together?

Oisin: We did 4 Samuel Beckett plays in Cambridge which went well. We were surprised how easy it was. This was 2010. The next year we said “let’s put on a proper play”. We chose Someone who will watch over me and took auditions for the other roles. We had 5 nights and managed to fill the venue.

Michael: And the reviews were incredible. This was the first big thing we did in Cambridge. We took a lot of people by surprise as most of the other actors in the area had this idea that you start at the bottom and work your way up whereas we just said “we want to do it, so let’s just do it”

Did you have the idea to make a theatre company yourselves at this point? It seems like a very organic process so far.

M: It was more about doing the next play. After we graduated Cambridge I went to Drama School, Oisin went to train with BBCNI and when we both finished we talked about putting on a play in Newry because there was a festival on. Also Oisin had some contacts.

O: It was New Point Players, started by Sean Hollywood, a local amateur drama society. I knew another guy who had cobbled together half a script and  thought it would be a good opportunity for him as well.

And then you decided to start Pan Narrans?

M: Yeah, we decided that we needed to meet people. We didn’t know enough, still don’t. It’s difficult doing everything yourself. Neither of us want to produce or organise. We’re looking actively for a producer at the moment.

O: We also want writers or anyone that has an idea  for a show they want to do.

Do you see this eventually being a platform for other people that don’t have these connections?

M:  It’s in no way exclusive. One of the biggest reasons we’re doing this on Culture Night is to meet as many people as possible.

O: We were talking together in a cafe a few days ago and Mick has quite a loud voice so another actor in the place overheard and asked to get involved. That’s the idea.

M: Yeah. Who knows? We might eventually actually be able to do something other than one or two man plays. 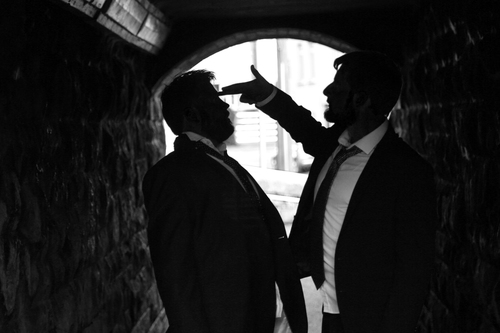 The two of you have clearly built a substantial relationship, as friends first and now working together. Are you nervous about working with someone else this time and if it might change the dynamic you have?

O: To be honest I’m relieved, I can’t fucking stick this guy. No, I think it’s exciting to have a new challenge. The more people we work with the better.

M: We’d only end up doing the same thing over and over. The more people involved, the more ideas we’ll be kicking around.

With both of your experience with film would you ever consider doing anything other than theatre with Pan Narrans?

O: We’re about story-telling so I think anything is fair game.

You’ve done two plays here now, I Banquo and another in Newry. So far you’ve had a lot of great feedback and reviews, in England as well. Have you done anything that has bombed?

O: Not exactly. The show we did in Newry was very experimental so it probably had the worst feedback. I think most people were wondering what the fuck was going on, but some people loved that.

M: I’ve yet to not be proud of anything that we have done together.

That problem of people not knowing what the fuck is going on could possibly be a problem with this play though, just because of the nature of it. Let’s talk about the play.

O: The play focuses on two guys. Seemingly some kind of incident has happened in their past. They both question each other and their own memory to try and figure out what’s going on. If the audience don’t understand what is going on but are still engaged by it or interested then it’s a success for me. If they’re bored it’s obviously a failure. We’re going to try to gradually play up the absurdity of it so people can just dip in or 5 or 10 minutes or if they like the style of it they could stay for as long as they wanted, even the whole piece.

O: Well we might get some weirdos, you never know.

What are you using in the way of props?

O: The only thing that the play stipulates is that there is a gun. Could be just a gun a metaphorical gun-

M: A comedy fake gun or a banana.

The banana strikes me as a novel idea, but this play seems to have a more serious nature to me. Is this something you’d consider changing even as the play progresses? You start off with something gritty and real and then swap the gun out for a banana?

O: We still haven’t decided but what could happen is that this turns into an exercise for the actors to judge their audience. If they seem like they’re up for a bit of a laugh, try it from a less serious angle. If it doesn’t work, make it more serious. The audience themselves could change how the play turns out.

In terms of direction, it’s such an unusual space to be performing in. What are you expecting?

O: I think it would be interesting if there was a line between ‘is this a piece of theatre or is this just two guys in the street having a fight?’ The location adds to the tone of the play. The fact that we’re doing this in the street means that there’s no need to build a stage or the environment around it. In terms of direction my job is made easier. On the night it’s up to the actors to feel the audience and take it where they want it to go. Come 7 o‘clock I’m probably going to go and have a pint in the spaniard.

I think that would be interesting. Could I feasibly walk past this or right between the two actors and think ‘Well that was strange’?

O: I think it’s more interesting if it’s less staged The characters are almost hobo-like, it is set in a back street and that’s where we’re doing this. I like the idea that they can see the audience around them but aren’t interested. They’re just invested in the conflict. But if some drunk guy walks in trying to be funny, he won’t be ignored. He’ll have to be brought into the play.

It’s a very organic way of doing things, I like that.

M: The play isn’t very forceful in how it’s carried out. It’s just two men, one trying to convince the other of his story. 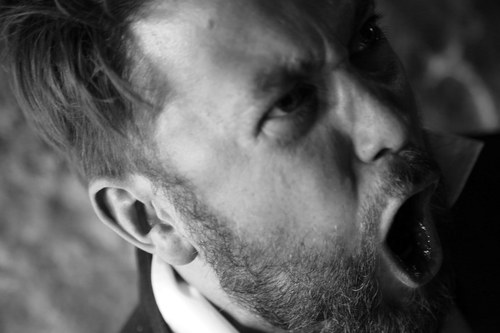 I, Banquo was so ambitious, it was very tense. It was just one man spilling his guts –

Yeah. This play seems to me more ambitious in that what you’re doing is so radically different and out there, but at the same time less ambitious in scope. It’s only ten minutes long.

O: I don’t think it’s that out there. There’s a lot of crazy stuff going on on Culture Night. This will just be one of many.

I think the improvisation could be really interesting. Aside from it being cyclical, someone could stand and watch you for half an hour or an hour depending on how much you mix it up. Are you planning to do this?

M: It’s hard to know exactly how eclectic the performance will be. Someone arriving when we start is not going to get the same performance as our audience an hour later. Even if only for the fact that we’ll have done it 15 times. We’ll be haggard and worn out by that point. The script is so loose. We can do anything with it. How we interpret it, comedically, dramatically, etc. is entirely up to us. The presentation is so flexible.

I think this is probably one of the more unique things I’ve heard going on at CN. Is there room for people to do more things like this?

O: We’ll see what the reaction is like but it’s always good to have a bit of live theatre. I think people are scared away from the theatre because they don’t want to spend £12 to sit in a dark room and see a potentially shit play so this allows them to walk past and just check it out.

What has it been like working with the organisers of Culture Night?

O: They pretty much just tell you to go for it as long as you’re not breaking any laws.

M: Which we may do, just don’t tell them.

What do you think of Culture Night as a concept?

O :This is the first time we have dealt with Culture Night like this. They were easy to approach with our idea and have just left us to it. As a spectator, I’ve been to it a few years, some of the things I’ve seen have been great, some have been crap.

M: But what you think is crap, someone else might love, Oisin.

O: Exactly. Exactly. It’s good. If it’s getting people into the streets, putting money into the local economy then its good.

M: I think it’s a great idea. Most establishments in the CIty Centre open their doors to something new. I think it’s lovely.

Are there any other events that you yourselves are looking forward to?

O: Right behind us there’s a live drawing thing going on.

M: They stole the good spot that we wanted. Bastards.