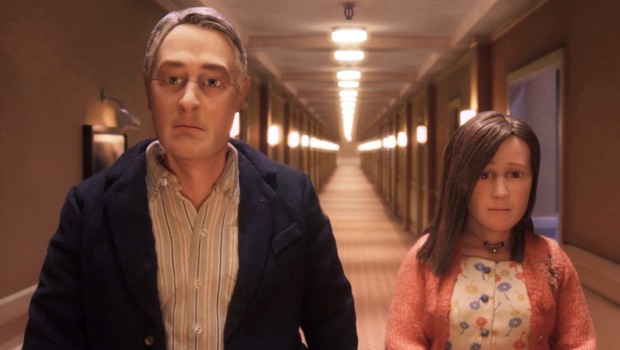 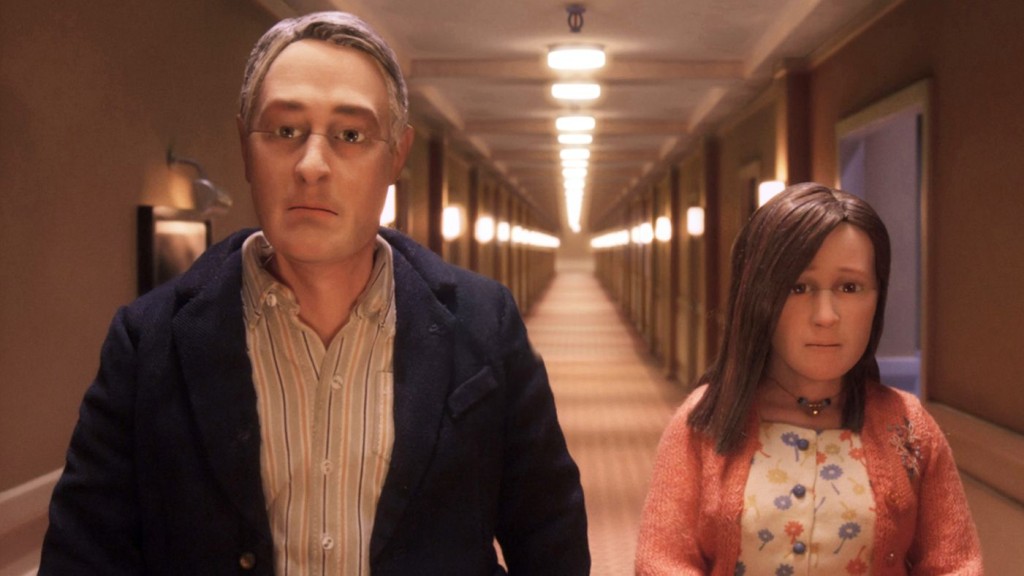 The line you’re going to read a lot about Anomalisa, Charlie Kaufman’s second film as writer-director, is ‘fake but real’. A stop-motion animation that’s nonetheless bursting with humanity. This is a fair assessment; like Kaufman’s work with Eternal Sunshine of the Spotless Mind or Synecdoche, New York, it’s a technically idiosyncratic look at very complicated emotional experiences, approached with curiousity and compassion. But this undersells just how stiflingly artificial the atmosphere of the film is; how deeply, deeply unreal the perspective of its protagonist feels. From the get-go, as the lonely customer service specialist Michael Stone drifts through the usual travel rituals – flight, airport, taxi, check-in, room keycard – the sheer mundanity on display is face-clawingly oppressive. The immediate instinct is for the release of escape. You watch and you gasp for air.

Michael, an unhappily married middle-aged man who’s basically a sigh given human form, is due to give a speech to industry professionals in the morning. He’s voiced by David Thewlis but everyone he meets or remembers – whatever gender or age – has the exact same voice (provided by character actor Tim Noonan). And they all bear the same inoffensive, bland face design, a horror-movie multiplication which adds a layer of dystopic paranoia. Only Michael, with his expatriate English accent and cowed, sunken expressive, stands out. The sameness is disorientating and claustrophobic; indicative of depression, perhaps, or a disorder or breakdown that the sufferer seems to have resigned himself to long ago. Until, suddenly, he hears a new voice through the hotel walls: Jennifer Jason Leigh’s Lisa, a shy telesales team leader in town to hear Michael speak. She bursts through the fog like a miracle, jolting Michael into a desperate, possibly live-saving romantic love.

The danger of turning our lovers into saviours is a familiar Kaufman theme; so too is the difficulty of getting out of your head and making meaningful connections with other people. Stone has made a career out of extolling effective customer relations, but every conversation he has is teeth-grindingly uneasy, the taxi driver pitter-patter and blank, smiling politeness of service staff functioning as darkly funny markers of everyday life’s enforced banalities. We’re used to seeing this stop-motion animation used for bright, goofy Aardman productions, but Kaufman and his co-director Duke Johnson have turned the form to sets that are painstakingly bland, that hotel chain absence of character which is simultaneously reassuring and suspicious. The ever-so-slightly stalled movement of the models, and the real-time reluctance to disturb the zombie pace, call to mind that underwater sensation that depression brings, a bogged-down slowness that binds you inside yourself.

It’s uncomfortable enough watching it, but Michael has to live this thing. Staring into his bathroom mirror, the model face starts short-circuiting, a clang of existential terror. Is he real? Is any of this real? All of which makes Anomalisa sound phenomenally depressing, but it contains multitudes. It’s funny and romantic and unsettling in a way which is often hard to pinpoint. Lisa offers her adoring new admirer a rendition of Cyndi Lauper’s ‘Girls Just Wanna Fun’ that’s maybe the most beautiful and wrenching sequence I’ve seen all year, bounding up her and Michael’s shared dreams of freedom and recognition.