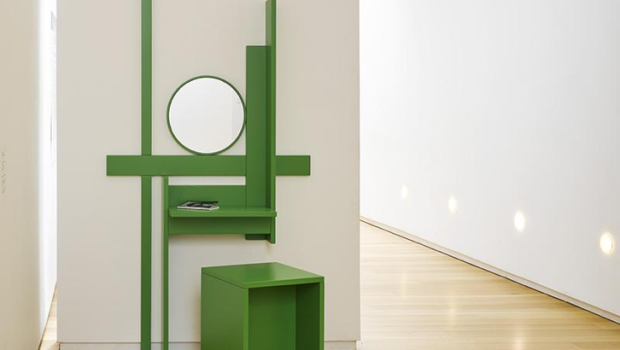 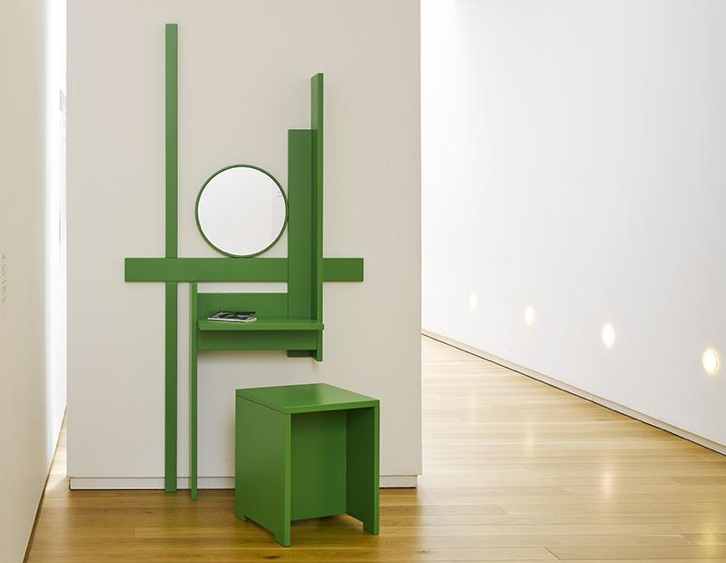 Boundaries as a theme is present in the four shows in this week’s Picture This – don’t worry we here at The Thin Air are not talking about Brexit. We mean boundaries in the sense of where something can be pushed to and expanded beyond, rather than the traditional sense of landmass and exclusion. Boundaries come with preconceptions, limitations and a sense of where something should stop or where you should stop exploring. The shows this week in Dublin, Belfast, Sligo and Cork alter, expand and shatter these while housing engaging and thought provoking exhibitions. We see a reexamination of a medium’s output (Sirius Arts Centre, Cork), a revisionary approach to discussing post-traumatic stress (Golden Thread, Belfast), a reevaluation of what and where a show in a gallery is (The Hugh Lane, Dublin) and a reassessment on what to expect (The Model, Sligo). While the cultural and social reservoir of the Euros may have run dry for both the North and South, our island’s galleries continue to provide ample output for us all to top them back up again.

Sligo: “The Model in Sligo has been balancing this rich history with contemporary and cutting edge art in recent years.” 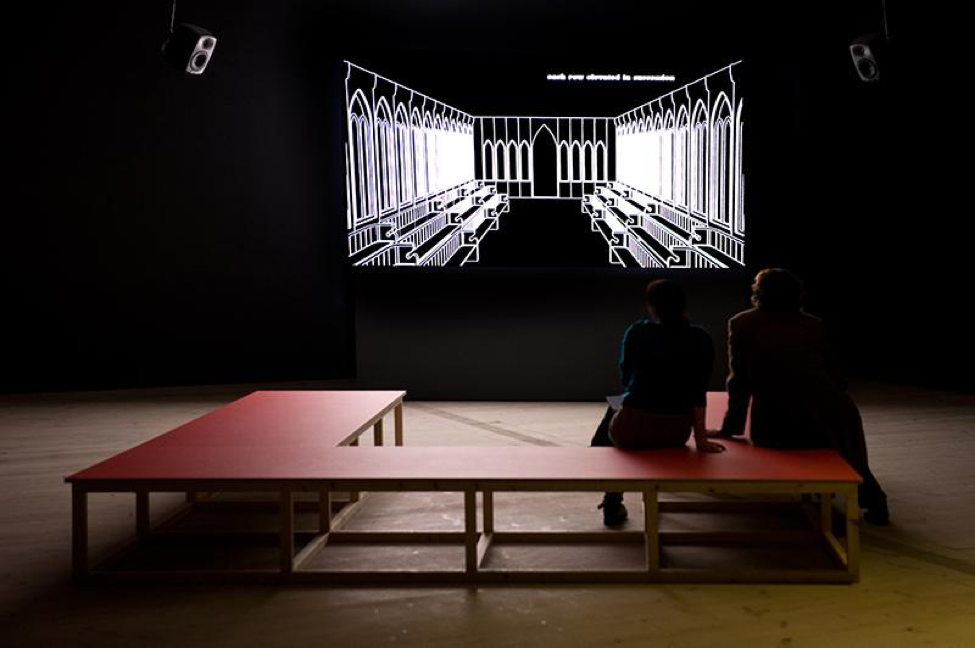 What: Elizabeth Price
Where: The Model
When: 25th June to 25th August

The West, and particularly Sligo, is often described as Yeats’ Country and as such you’d be forgiven for thinking the artistic footprint of the area was limited to either the Yeats family or artists of a similar ilk. The Model in Sligo has been balancing this rich history with contemporary and cutting edge art in recent years, and is currently presenting three works by Turner Prize winning British artist Elizabeth Price. On show are a trio of pieces, 2009’s User Group Disco and 2012’s The Woolworths Choir of 1979 – the latter of which saw her become the first video artist to collect the coveted award since Steve McQueen did so in 1999. The Woolworths Choir of 1979 is a triptych of distinctive videos sections, each of which is tied together through hand gestures and suggested movements to create a hypnotic installation. Along with these two critically acclaimed works is Price’s new piece entitled – K. This work is dual screen presentation that features CGI animation of industrial processes and troupe of female mourners. The mourners are voiced in a futuristic, almost robotic, voice which is overlaid excerpts of pop culture and musical performers – a signature of Price’s pieces since her twee pop days in Talulah Gosh. This use of video from recent social history helps tie the futuristic aspects of the works to the current and encourage audience dialogue further. Price’s trio of works runs until the end of August alongside a diverse summer run in The Model. 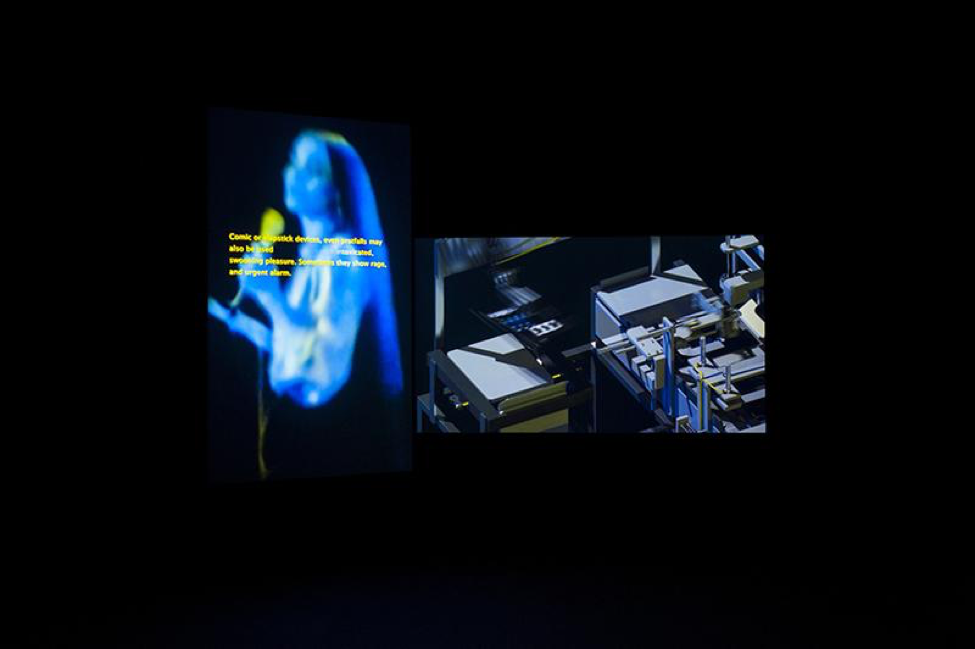 Belfast: “The works encourage new narratives to be created and these are intertwined with already established concepts of conflict.” 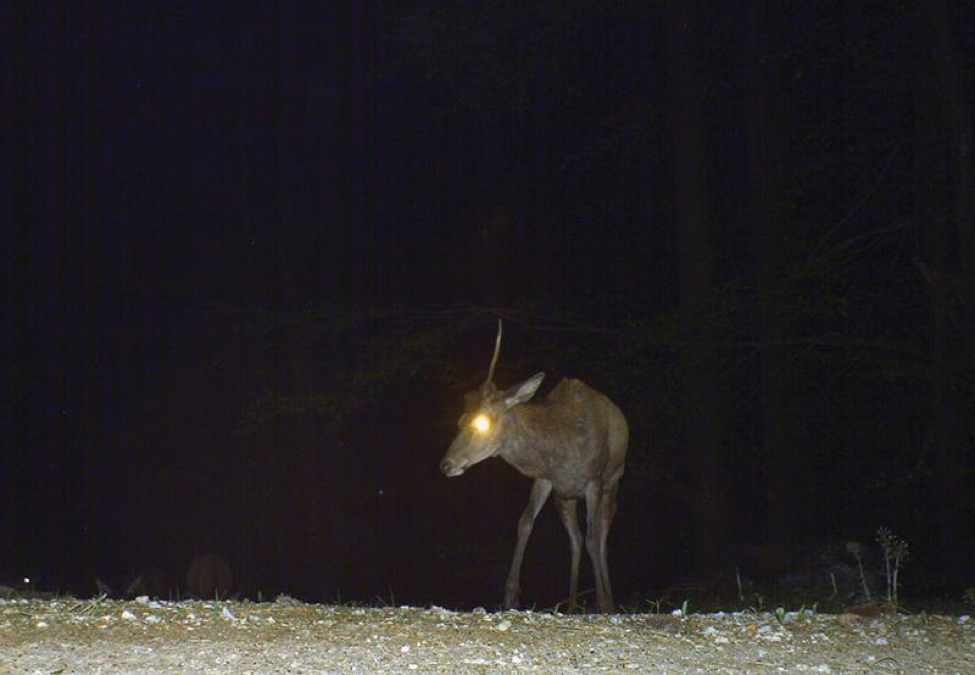 What: Victories are Short-lived
Where: Golden Thread
When: 23rd June to 13th August

2016 represents the centenary of numerous historical events, and while many on this island center on the conflict that took place in Dublin it can be easy to forget that, in a broader European sense, the conflict that gripped the continent was The Great War not The Rising. The Great War was one of the first where posttraumatic stress (‘shell shock’ as it was then known) was first discussed and a comprehension of the long-term effects suffers experienced developed. With this departure point in mind Golden Thread gallery in Belfast has invited artists Milena Bonilla (Columbia), Cecily Brennan (Ireland) and Elvira Santamaría-Torres (Mexico) to create Victories are Short-lived. The show is a look at the aftermath of conflicts in both physical and psychological ways, and encompasses the mediums of drawing, installations, photography and video works. The exhibition encourages new narratives to be created and these are intertwined with already established concepts of conflict. The result is a well balanced presentation with the three artists’ work serving to provide a multifaceted and cohesive comment on war conflict, a subject that is often fractured and divisive. 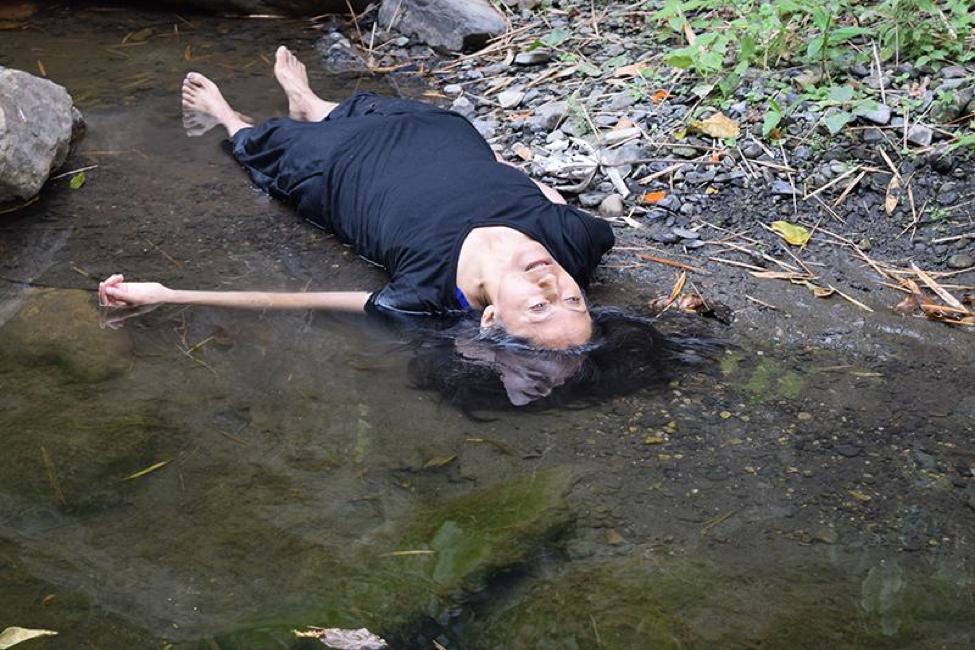 Dublin: “This contrasting existence provokes both self reflection for the viewer and a unique experience to view and enjoy a gallery.” 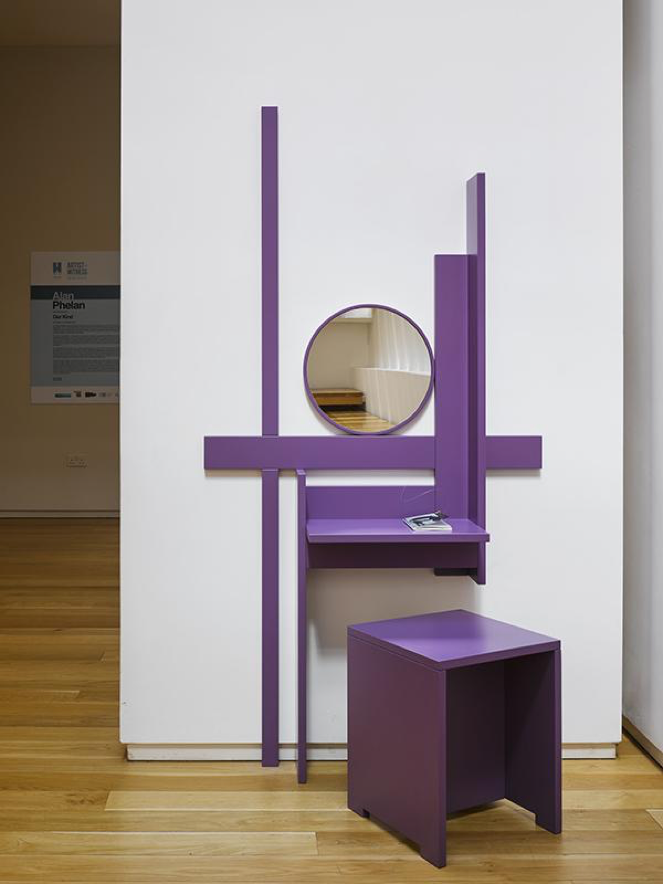 What: What’s What in a Mirror
Where: The Hugh Lane
When: 28th April to 25th September

A stick that is often used to beat modern contemporary conceptual art is that it is not accessible, and as such fails to truly engage with a mass audience. Its meaning lost in its transfer from artists’ thought to finalised form. Ultimately it can be misinterpreted, or worse dismissed entirely, by its viewing audience. This is something that What’s What in a Mirror, the latest show from British conceptual artist Liam Gillick in Dublin’s Hugh Lane Gallery, can not be accused of. Gillick has created a show in a gallery in the literal sense of the phrase. Not contained within a traditional gallery space or wing, his pieces – a series of multi-coloured lacquer wood desks and stools (each with its own circular mirror come reflective viewing apparatus) – are fixed to the gallery’s walls in a multitude of locations. These pieces, which are accompanied by a series of texts collated together by Gillick, seem to function as extensions of the gallery itself while also operating as stand alone reflection stations to view the gallery and the other in-situ shows. This contrasting existence provokes both self reflection for the viewer and a unique experience to view and enjoy a gallery. Gillick and the Hugh Lane invite their audience to sit, work, relax and take stock of their surroundings and thoughts – this review itself was written at the show’s purple piece. What’s What in a Mirror runs until September 25th, be sure to take a minute, hour, day to get truly lost in it. 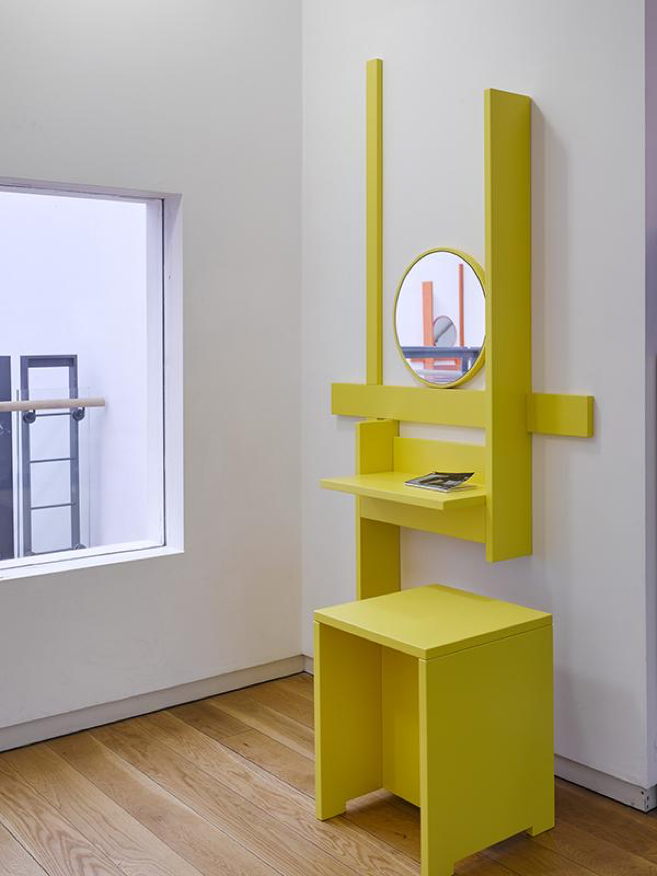 Cork: “The result is a collection of images that resemble abstract painting while still staying true to their photographic heritage.” 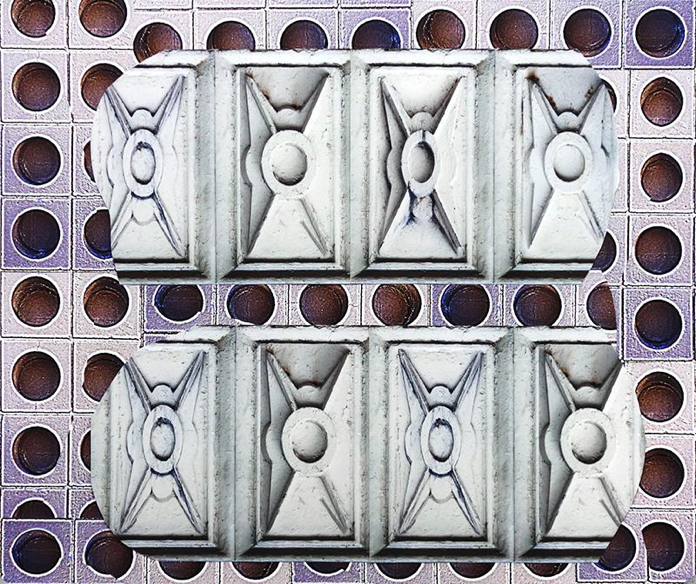 The etymology of the word photography stems from the Greek words phōtos and graphé, which together combine to form the phrase ‘drawing with light’. Modern everyday use of photography as a recording device in order to replicate for repeat consumption has meant this simple yet powerful meaning has become muddled and somewhat lost. The practices of photographers Liz Nielsen and Max Warsh seek to redress this in latest exhibition in Cobh’s Sirius Arts Centre. Nielsen’s work sees her take the phrase ‘drawing with light’ literally as she uses light sensitive paper that has been exposed to a wide variety of unique light sources – the vary from a bicycle light to a traditional photographic enlarger. The result is a collection of images that resemble abstract painting while still staying true to their photographic heritage via their bold lines and joyous colour palette. Warsh’s work appropriates slightly more traditional photographic practices in the sense that his work’s genealogy can be traced back to a single image. Through collage work that focuses on the miniature details of the architecture we encounter during our everyday commute, Warsh constructs large works that are both inviting and evocative. The pairs work has been collated together and curated by Jessamyn Fiore and is on show in Sirius Arts Centre until August 1st in Cork.