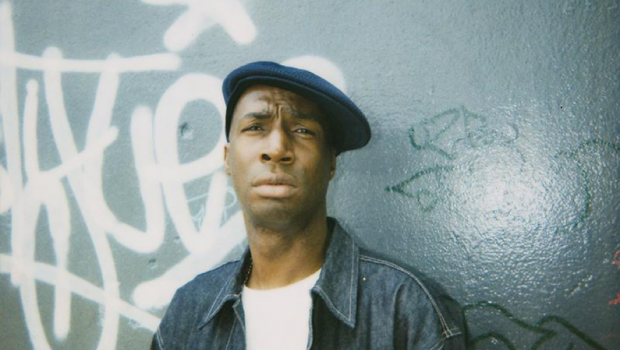 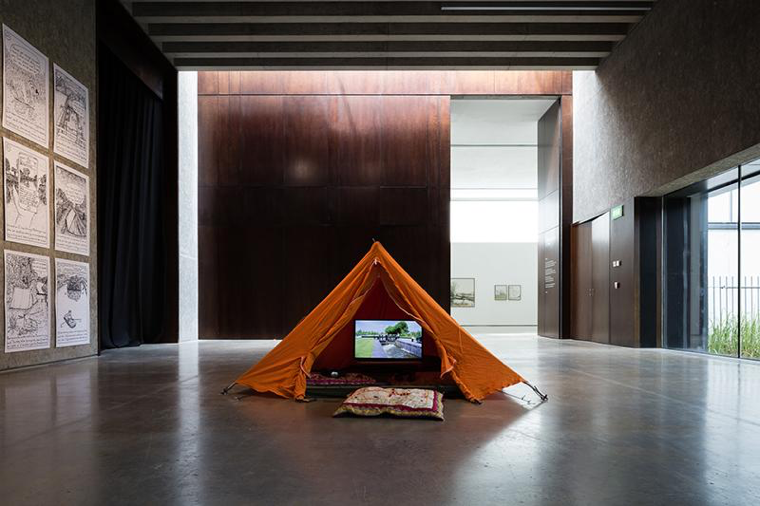 Journeys come in many sizes, shapes and forms. They can be physical, they can be metaphorical, in truth they can be anything. The four shows covered in this edition of Picture This represent four journeys the artists have taken along the way to the final show hosted in each gallery. We see a physical journey in VISUAL Carlow as Enda McCarthy retraces the steps barges took as he travels from Dublin to Carlow. In Dublin we see IMMA’s journey over the last 10 years as she expands her collection in the face of financial adversity. Katrina Palmer takes her audience on the journey from written word to gallery sculpture in Void Derry, while in Cork’s Sirius Arts Centre Swedish artists Emma Hartman and Lina Selander take different journeys on separate paths before reconverging under a unified theme. These four shows featuring a multitude of artists serve to highlight the broad reaching and wide narrative art can propose, as well as the contrasting and ultimately similar journey all artists take during the creative process. Fundamentally no artist’s journey is complete without an audience to engage with so be sure to give them a dig out at your local gallery and explore these wonderful shows.

Dublin: “Through generous donations and key partnerships with bodies like Hennessy Ireland a document of Ireland and her contemporary arts is being created.” 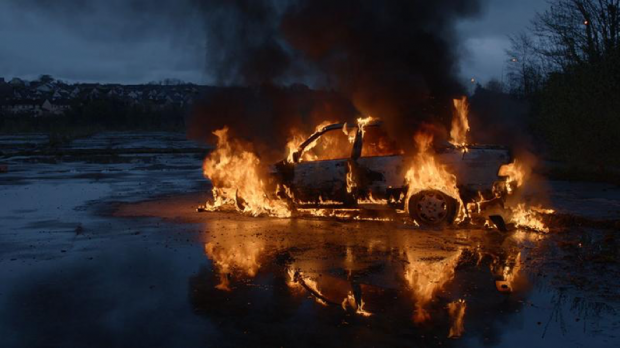 The role of any national gallery is to record as well as present. A duty exists to preserve the current for future generations and ensure that the foundations for cultural legacies are established. As you enter IMMA Collection: A Decade you are advised that this crucial role has been curtailed in recent years due to cuts in funding. It has been five years since IMMA has had a substantial fund pot from which to collate, preserve and present a cross-section of Irish contemporary art – to put it bluntly: IMMA has been stunted. Through their association with Hennessy Ireland, the gallery has sought to halt this trend and reverse it. The result is The Hennessy Art Fund for IMMA Collection an initiative which saw IMMA acquire four works by artists yet to be represented in gallery’s main collection – Kevin Atherton, Rhona Byrne, David Beattle, and Denis McNulty. Interwoven with these four artist’s works are the many donations IMMA has received in the last decade, something which is essential to the gallery’s continued manifesto of cataloguing art. We sees works such as, Vik Muniz’s Portrait of Alice Liddell after Lewis Carroll using his ‘reddraw’ technique and Canadian painter Elizabeth Magill’s dreamlike forestscapes. As you journey further into the gallery we come across Irish-born artists Willie Doherty with his powerful but delicate Remains from 2013 and former Mexican-based Surrealist painter Leonora Carrington. As you leave the exhibition you feel as though something is missing in this show, and by something I mean a host of Irish artists in the midst of their mid-career bloom. Never have I experienced a show shaped, almost silently dominated, by what was absent from the walls rather than what was displayed on them – but then I feel that is the narrative IMMA wished to share. A narrative they needed to share and one we need to take on board, sooner rather than later. Resilience exists within this exhibition and within IMMA. Through generous donations and key partnerships with bodies like Hennessy Ireland a document of Ireland and her contemporary arts is being created. This show also glimpses at growth this process should experience for the decade to come. 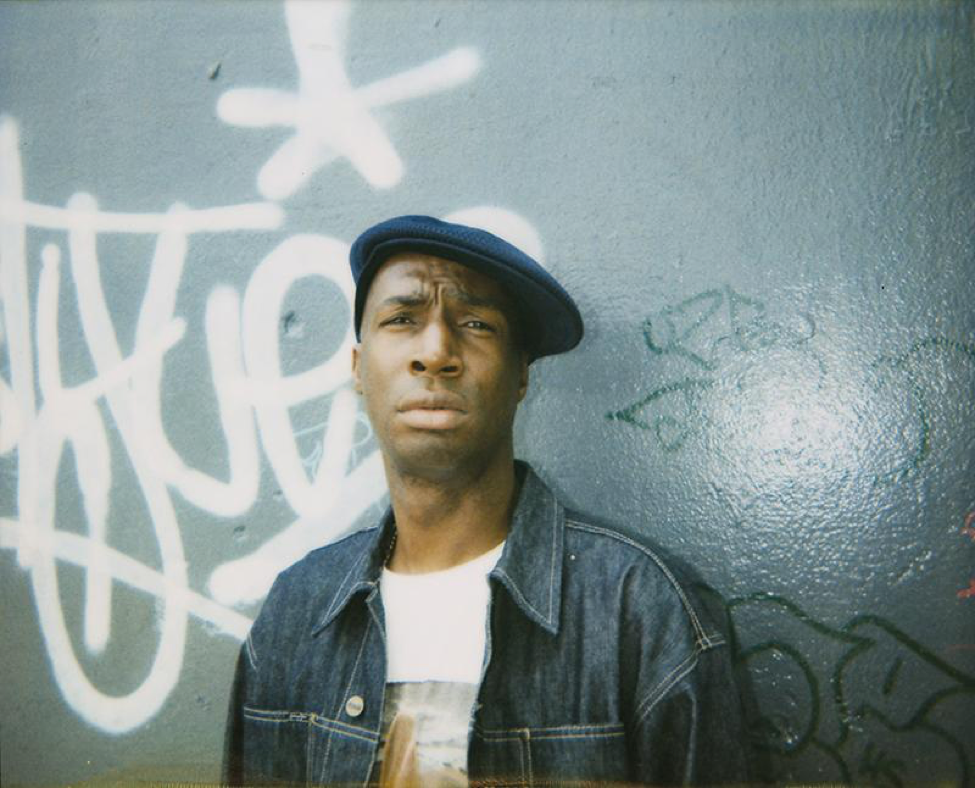 Carlow: “A meticulously executed exhibition, Take Me To The River is one that will leave it audience reassessing their own roles and native spaces.” 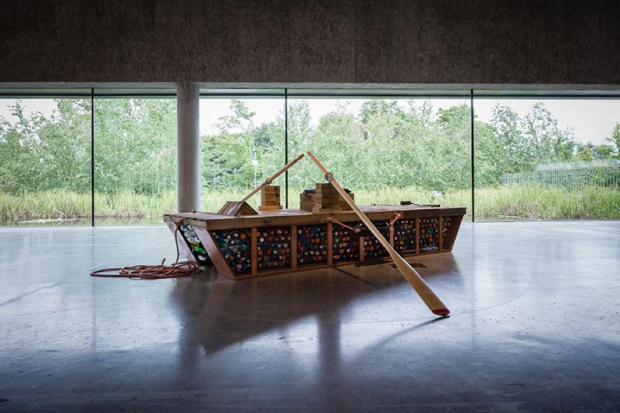 What: Take Me To The River
Where: VISUAL Carlow
When: 9th July to 16th October

When you think of Ireland’s Grand Canal you often only associate it with the main 82 kilometre stretch between Offaly’s Shannon Harbour and Dublin’s Grand Canal Dock. This in fact only the main thoroughfare of this vital travel network, with numerous tributaries linking counties via other natural and manmade waterways. Acting like a Victorian M50, it served to bring each region’s’ native export to the capital. Once it had reached its journey’s end at the Liffey these were compiled to form various produce in the then Empire’s second city. Once such route was from Carlow to Dublin via the Barrow to deliver barley to Guinness at St. James’ Gate – this tradition ended in the 1960’s when the canal’s barges took their last journey. Dublin artist Fergal McCarthy has always been fascinated with Irish waterways, most notably with his installation’s Liffeytown and No Man’s Land. The former saw the artist place monopoly style public artworks on the capital’s river, with the latter installation seeing him living a man made island on the Liffey. For his latest work in VISUAL Carlow McCarthy transpose the traditional route taken from the gallery’s town to Dublin and embarks on a journey along the Grand Canal in reverse. Using a barge he constructed himself from wood pallets and plastic bottles extracted from waters near his home in Grand Canal, McCarthy rowed for 8 days until he reached Carlow. Along the way he collected debris from the canal and it is these that form the artworks constructed in Take Me To The River. This show reevaluates the role spaces and areas, such as the Grand Canal, can have once their initial constructed purposes has ceased – and this is further enhanced through the use of ephemera found along it’s shores. A meticulously executed exhibition, Take Me To The River is one that will leave it audience reassessing their own roles and native spaces. 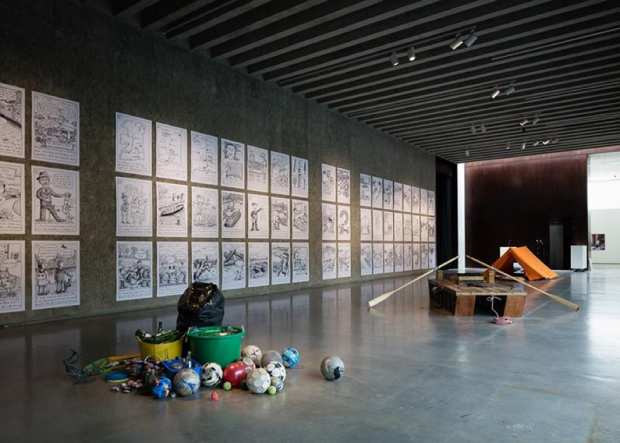 Derry: “this exhibition represent a wonderful introduction to anyone yet to see her work before and a further reminder of her calibre to those who have.” 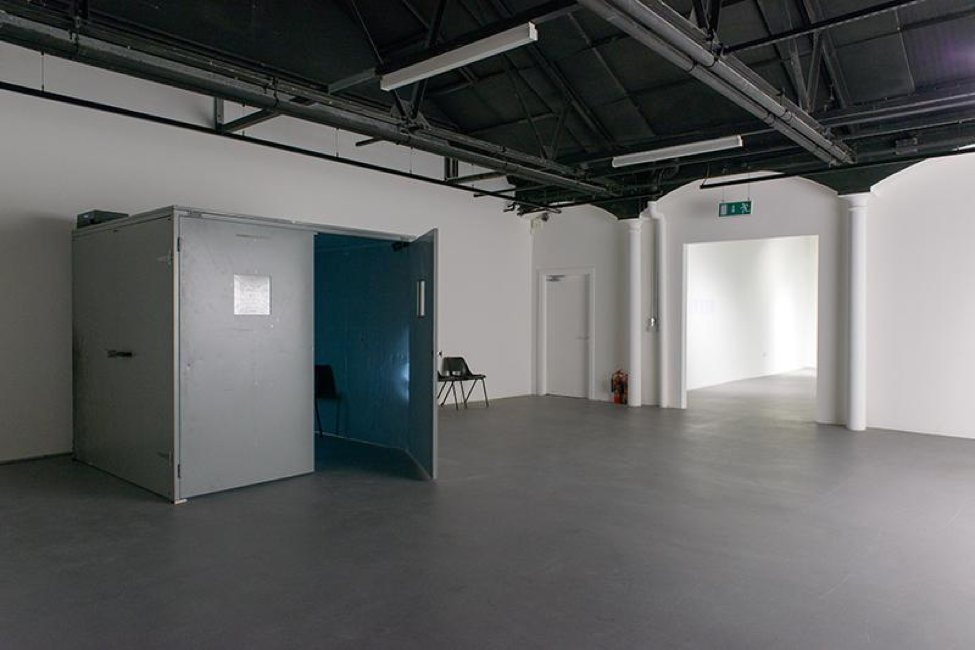 What: The three stories are flattened
Where: Void
When: 16th July to 10th September

Void in Derry provides the setting for Katrina Palmer’s first solo exhibition in Ireland entitled The three stories are flattened. As the title alludes to, the exhibition is a threefold presentation of a selection of Palmer’s projects, two past (The Fabricator’s Tale (Blood-Bespattered Table) and Reality Flickers – both 2014) and one new piece created specifically for Void called Now Landscape. Palmer is a sculptor who employs the written word as her Modus Operandi as she creates in-situ pieces within the gallery. Both Reality Flickers and The Fabricator’s Tale began life as fictional literary works before beginning the journey of transition from page to exhibition space. The former is now a metal box installation within the gallery, while the latter is now a mixed media piece. We often separate works of art that are text based from other outputs such as traditional sculpture and painting. Palmer challenges this assessment in the simplest way – by ignoring it. Written pieces within gallery spaces can sometimes feel detached, and serve as more of an accompaniment rather than an immersive cohort of the pieces surrounding it. This is something that could never be interpreted at one of Palmer’s shows. An intriguing and engaging artist, Katrina Palmer is someone who is pushing the boundaries of what modern sculpture is. The three stories are flattened strengthens this assessment and this exhibition represent a wonderful introduction to anyone yet to see her work before and a further reminder of her calibre to those who have. 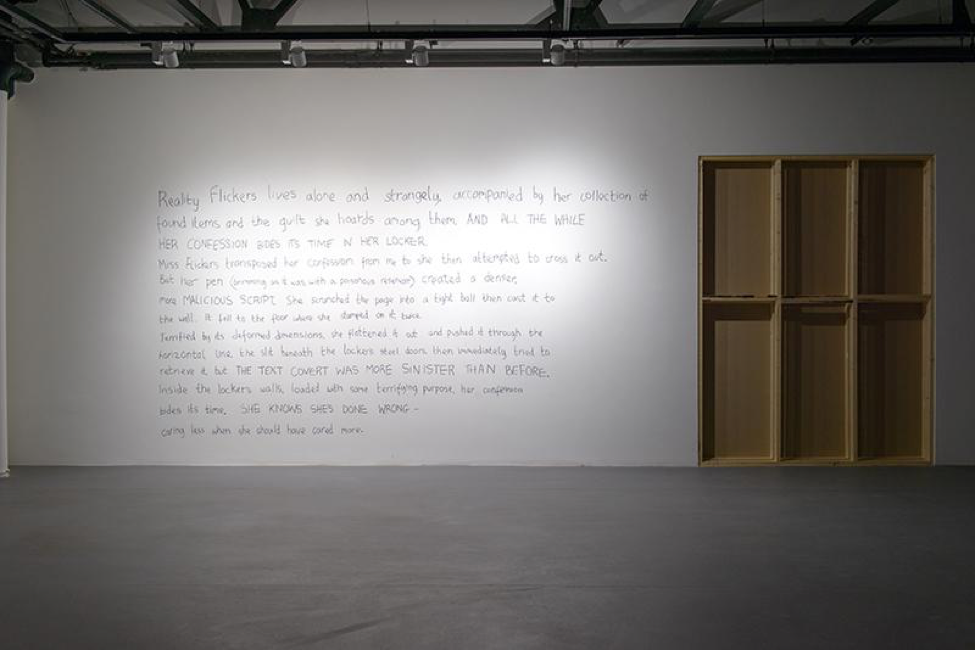 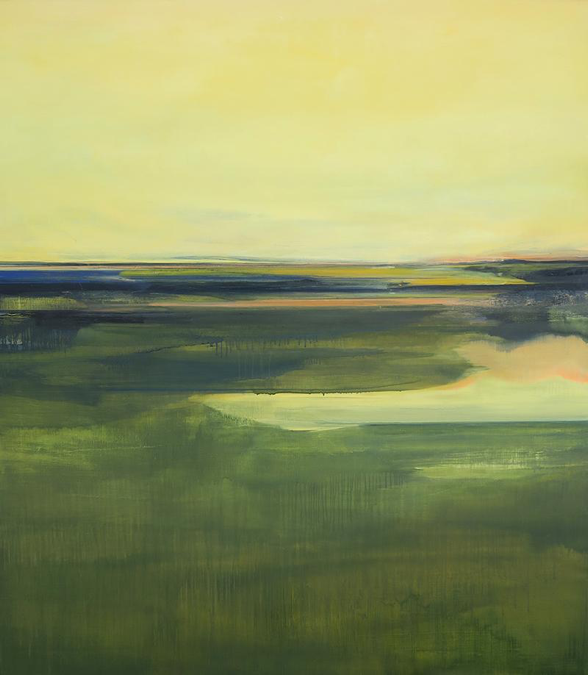 What: Speculative Fictions
Where: Sirius Arts Centre
When: 12th August to September 10th

The works of two Swedish artists, Emma Hartman and Lina Selander, are currently on show in Sirius Arts Centre in Cobh under the banner of Speculative Fictions. The pair’s outputs present a similar overarching theme –  an exploration of the world. Hartman suggests at a future yet to be reached and Selander at both the past and the present simultaneously. While the subject matter for both artists may be linked, albeit in a broad a sense, the mediums and approaches the pair take diverge almost immediately. Their contrasting approaches see Hartman create large scale paintings using oil on canvas, with a emotive palette and an enchanting technique. While Selander uses both photographic and video imagery as well as text based pieces in her creations. For this exhibition Hartman has created three new pieces (Pearl, Delayed and Tidal) in response to the architecture of Sirius Arts Centre itself as well as the surrounding locality. Selander’s works often look at junctures in history where an institution or place ceases one function and begins life anew under an alternative manifesto. In Notes for a Film on Nature we see a former courtroom that has now become an exhibition space. For this work Selander has projected a video piece onto a photograph of the repurposed space, further enhancing the process of reappropriation. Though each of the artist’s work is distinct from the other it serves to present a more rounded approach to the theme proposed in the show’s title rather than a jarred one. We see both artist’s take a different path on their journey to finalised piece. They both propose Speculative Fictions in this beguiling and entertaining exhibition. 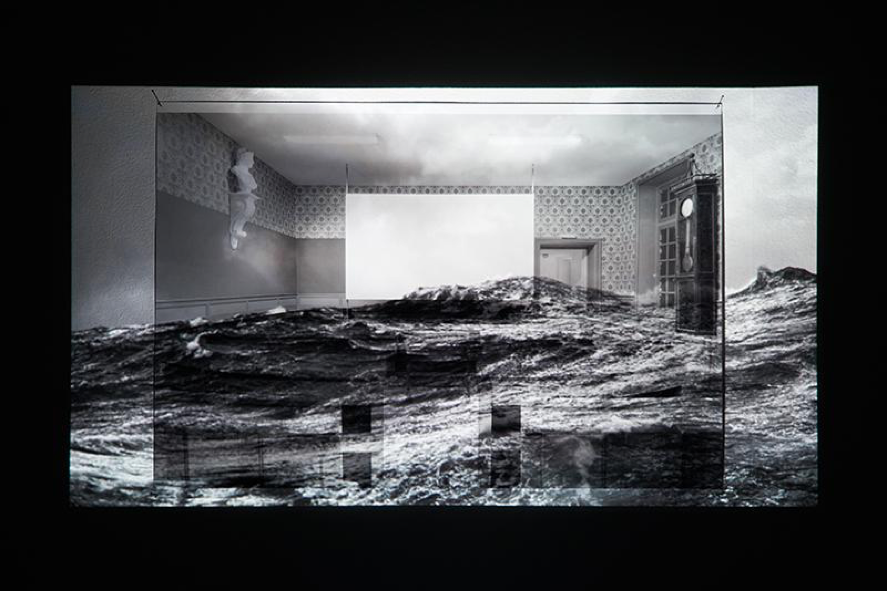