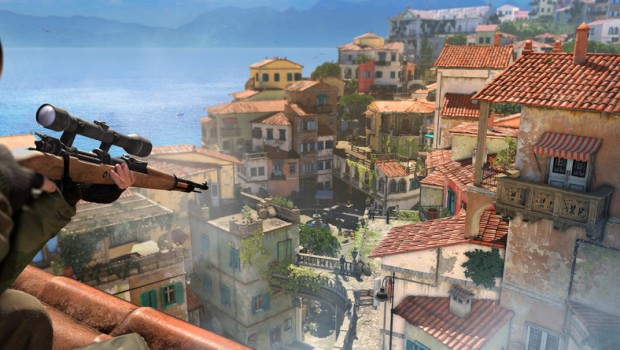 Whereas most modern first person shooters are looking to the future for inspiration (notably, the much maligned Call Of Duty: Infinite Warfare), this gleefully violent game instead looks to the past – or at least a ludicrously stylised retelling of the past. In this version of World War II, and in the epitome of Boy’s Own wish fulfilment, it only takes one man to bring down an entire fascist regime. That man is Karl Fairburne, a lantern-jawed Rick Dangerous type who is preternaturally gifted at operating a sniper rifle and amoral enough to use it without losing any sleep. To paraphrase Wolverine, Fairburne is the best at what he does… but what he does best isn’t very nice. That best involves infiltrating Nazi strongholds and eliminating everyone inside. The preferable approach is through stealth. You can sneak around, highlighting unsuspecting baddies from a distance, and picking them off. Here, you can use the sound of car engines or low-flying planes to mask the sound of the shot, or by setting up a carefully timed sequence of exploding barrels and cars – kind of like in that famous video by OK Go, but with more annihilated Nazis at the end. The other alternative, is to charge into a base, all guns blazing, and hope that the commanders will not call for reinforcements. This option may be fun but is largely ill-advised: Sniper Elite 4 poses a steep challenge, particularly on the more punitive difficulty levels, not only in the sheer number of soldiers to take out but also in their accuracy with their own sniper rifles.

One of the most impressive elements of the game is the size of the maps. Each of the nine levels contains a positively huge play area that can be traversed in any way you see fit, along with various objectives and sub-objectives that you can also complete in any order that you fancy. This variety creates replay potential that is augmented further by a fun mechanic that kicks in if you pull off an effective piece of sniping. As in the recent Mortal Kombat games, the player is treated to an slow-motion, x-ray shot of a bullet penetrating an enemy’s skull or lungs in full technicolor glory. The detail of exploding viscera and splintering bones is at once stomach-churning and giggle-inducing though some players might baulk at the dubious manner in which the ethics of killing are gently nudged to one side. That said, this is clearly not meant to be taking seriously, given that you can also shoot off a round to a soldier’s… ahem… testicles – you can insert your own Albert Hall joke here. Further, while developers Rebellion have invoked World War II, this is not an accurate portrayal of actual events: the Nazis are straight out of Raiders Of The Lost Ark, while the storyline itself is pure Commando comic book fare. Also, it lacks the nastier edge of, say, Wolfenstein. On his travels, Fairburne will encounter the French Resistance, Sicilian Mafia and the Black Brigade, each of whom bear a grudge against the advancing German army and who require your help.

Yes, there is an argument to be made that such trivialised depictions of military conflict are morally questionable yet Sniper Elite 4 makes no bones about the fact that, in comparison to the moralising likes of Battlefield 1, this is pure entertainment. And as entertainment goes, it is pretty great. Ross Thompson