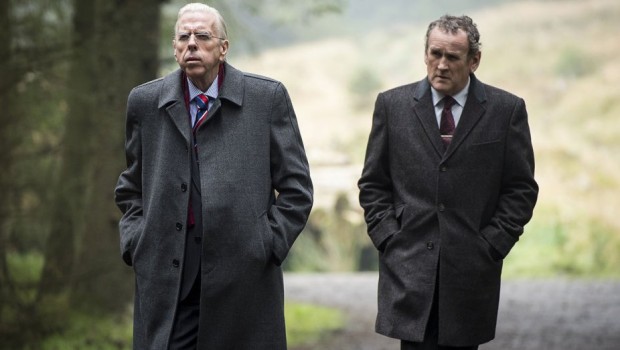 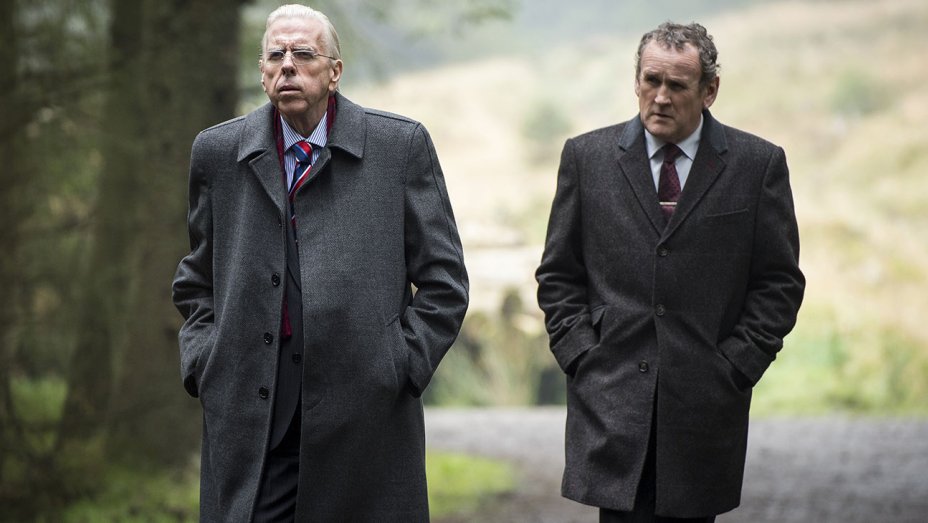 With the opening credits of The Journey stating that you are about to watch an imagined depiction of what happened between Ian Paisley (Timothy Spall) and Martin McGuinness (Colm Meaney) during a key moment in the Northern Ireland peace process, you can hopefully brace yourself for the ludicrously ill-conceived film that screenwriter and novelist Colin Bateman and director Nick Hamm (Godsend) have decided to bestow upon the public.

Set in 2007, when the sworn enemies were at loggerheads over how they could cut a deal and set up a power-sharing government between Paisley’s DUP and McGuinness’ Sinn Fein, the two politicians are tricked by those dastardly MI5 scallywags, lead by a jovial John Hurt, into taking a journey back home together from Scotland. All the while the whole gang, including Tony Blair, Gerry Adams and Ian Paisley Jnr., watch on in a room broadcasting secret camera footage from the car, hoping that the two of them finally, shake hands and start getting along like good ol’ boys (seriously). Can the two adversaries get over their hang-ups and become the now infamous ‘chuckle brothers’?

There are quite a few times where your head will probably be in your hands if you have even a basic grasp of security protocol around high powered political figures. Realism has been dropkicked into space from the very point that they start on their fantastical journey but it only escalates with Hurt’s lighthearted take on George Smiley, trying to puppeteer them into getting along. His role is like the Cilla Black of the intelligence and espionage world, with a sort of narrating part where he bestows the wisdom of MI5’s operations and describes how ‘they are a troubled lot in Northern Ireland’. Then you have the ridiculous concept of Tony Blair, Gerry Adams and Paisley Jnr. all sitting behind him like a bunch of mates, egging the duo on while slapping each other’s backs and winking at each other. What were the filmmakers thinking!

Spall (Turner) has to be commended for taking this incredibly difficult role on but his accent is very dodgy at times and slips into a gruff English accent on numerous occasions. When he goes into firebrand preacher mode in a daft sequence in a filling station he actually pulls it off really well, but his normal chat varies dramatically in quality. The face worked but they didn’t achieve the stature of Paisley particularly well, as Spall is short and slight. The Van‘s Colm Meaney works a treat as McGuinness, looks wise, but his lines had far too much forced humour, giving much of the ‘banter’ dialogue a hollow feel. They also made him out to be wet behind the ears, amazingly. How they got that idea, I don’t know.

There are some good moments as they both accuse each other of their mutual crimes and shortcomings but the finale had me scratching my head in how they depicted their final agreement, especially on Paisley’s part. The Journey has taken a complex, controversial and hugely important period in Northern Irish history, one with hard questions and frustrating answers, and gave it the Love Actually treatment. Hamm was not the director for this and Bateman should stick to the novels: this is contrived and ill-conceived claptrap laced with dodgy dialogue. A pointless take that will give foreigners an inelegant slant on a momentous period of NI history. Disappointing. Kev Lovski