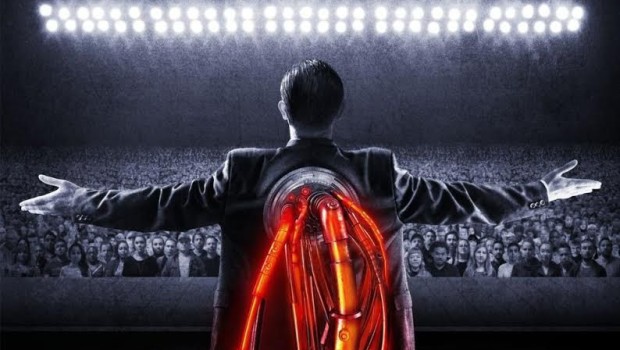 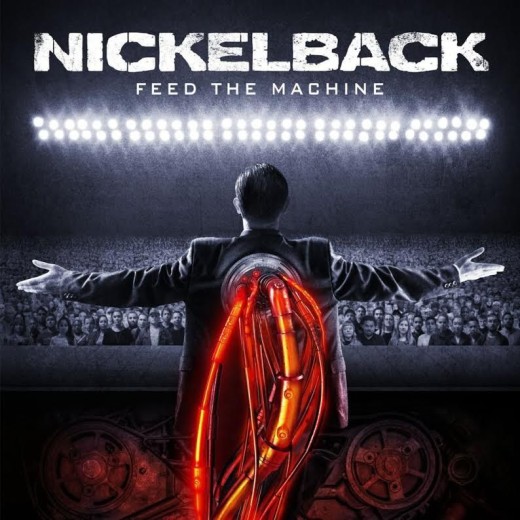 This review is the most recent entry in Will Murphy’s 12000 word thesis on Nickelback. He speaks from a place of knowledge, understanding and a begrudged appreciation due to stockholm syndrome.

Feed The Machine is Nickelback’s ninth album. Let that sink in. Nine albums. This band has released a full-length LP as many times as 50 Cent has been shot. Given the notoriety surrounding them, it’s hard to fathom how they’ve kept on trucking all these years. The group has become more meme than band at this point. Every joke has been mined and we are all comfortable with the notion that they’re the worst band since Hitler’s ill-fated Polka group. Human automaton and professional creep Mark Zuckerberg even got in on the action, and really, once that happens, it’s fairly clear that the joke’s over. As with every other premise that the Internet has adopted, this one has been ground down into a fine dust. This online furore presents the listener with difficulties in examining a record like this on its own merits, using only its contemporaries and the band’s previous efforts as a yardstick. The line between actual critical discussion and pointless 9Gag jokes has been completely FUBARed.

So, if we move past the obvious “lol, dey r d wurst band evzzz” analysis, can we actually have a meaningful realistic discussion about the most consistently successful rock bands of the 2000s? Hopefully. Because the simple fact is; they’re here to stay. And since mocking them hasn’t worked, maybe we should try to understand them? How then, does Feed The Machine compare within the group’s canon? Well, badly actually. This album is nothing more than a turgid affair by a rubbish Metallica cover band. There. Even taking into account the very low bar set by the rest of the band’s discography, this album scrapes the bottom of the artistic barrel. There are a number of reasons for this, chief among them being the notable lack of any kind of levity.

Nickelback have been in the on the joke for the last decade but despite that, they’ve never actually fully grasped what it truly entails. It’s more like they realise that there is a joke about them and have acknowledged its existence. There’s no understanding there. Ever since the banal juggernaut that was ‘Rockstar’, there’s been an undeniable twinge of humour and breeziness to the proceedings. Sometimes it was fun, as on the actually genuinely good ‘This Afternoon’ and ‘Get Em Up’. Sometimes it was cloying and unbearable, like the video for ‘Trying Not To Love You’. But even within this framework of self-awareness, they have consistently misjudged the balance, as on their previous album No Fixed Address which was marred by ill-judged transgressions into vaguely racist funk. Things are different on this record. They’ve gone in the opposite direction. There are no wry smiles here, no winks to the camera or recognition that this is all simply a bit of fun. Feed The Machine is a much more po-faced, serious examination of a series of increasingly tepid rock cliches, each serving to illustrate how deep Kroger’s insecurities run but never letting on that he’s in any way aware of them.

Going through the album from top to bottom, the flaws are self-evident. There;s the title and cover art, to begin with. The image shows a suited figure standing on a pulpit addressing the masses, while unbeknownst to the audience, iridescent cables run down his spine as though he were in the Matrix. Looking at title and cover in tandem, one thought should ring obnoxiously loud in your mind: Nickelback is raging against the “machine”! Not that Nickelback is Rage Against The Machine, but that Nickelback is taking the same place in music history as they did, standing as the defenders and champions of the silenced masses.  There’s no irony in this image. There’s no recognition that this kind of naive “down with the system” rebellion is generic and meaningless as the target and ultimate goals are incoherently defined. There’s no understanding that claiming to fight this nameless, shapeless “man” is astoundingly obnoxious when we all know he’s the one signing your royalty cheques. But most of all, there’s no acknowledgment that this kind of rebellion became old hat twenty years ago and is in and of itself a joke. It’s like yelling “Kony 2012” today without a sliver of sarcasm. So ultimately you have a record that is devoid of any consciousness of the last 15 years of the counterculture movement, delivered sternly by a multi-millionaire who’s trying to get you woke. It’s like listening to a junior banker who just watched Fahrenheit 9/11 for the first time vocally try to understand why all sheeple around him aren’t as outraged as he is.

This 15-year long gap in their cultural understanding isn’t confined to economics either. Musically, this is a top ten album from the year 2002. It has all the hallmarks of those awful, long-forgotten nu-metal bands whose one moderate hit of a single is endlessly replayed by Kerrang! TV. Think Breaking Benjamin, Saliva and Hoobastank filtered through Metallica’s Load. That is Feed The Machine: An overblown, overproduced mess of faux integrity and aggression. It’s the sound of 2002 brought back to life with uncomfortable clarity, like Frankenstein’s Monster. What’s so unfortunate about this aspect of the album is that the band had outgrown this phase years ago. The days of ‘Leader Of Men’, ‘How You Remind Me’ and ‘Someday’ were numbered while many of the band’s critics were just children. Since then, the band had grown musically, albeit in the most annoying manner possible. This isn’t a “returning to your roots” move, this is a full-scale regression and for that it deserves to be scorned.

While they may have musically reverted, the lyrics are as reliably terrible as they’ve always been. But some cuts here take the prize as Kroger’s worst work to date. The easiest example to pick on would be ‘Must Be Nice’. The main lyrical feature of which being a barrage of references to fairy tales designed to underscore a bitchy chorus about someone whose life seems to be perfect.

Jack be nimble, Jack be quick

Jack wound up with a broken neck

Humpty Dumpty, do your thing

Oh, it must be nice

To spend each day in paradise

You wonder why you’ve never failed

Your life’s a goddamn fairy tale

What the hell is this? This is completely dunderheaded and is only funny in the way that it is not supposed to be. At one point, Kroger shouts “420 Blackbirds, Oh So High” for crying out loud. Oh Chad, you’re so edgy and cool, smoking the herb, writing riffs.  When you encounter a block of lyrics like this, you’re left with the question you should never have to ask yourself: “Why is this 42-year-old man yelling fairy tale and weed references at me?”

On the other end of the spectrum then, you have the thoroughly ill-advised voyage into politicism that is ‘Silent Majority’

So what if we all stand up?

What if we don’t give in?

What if we traded all complacency for a voice that won’t be ignored?

How can we just give up?

What if the silent majority wasn’t silent anymore?

Here, Kroger is once again falling into the unfortunate trap of referencing something that he evidently knows nothing about. The Nixonians who quietly supported a flabby faced despot who led the War on Drugs, and campaigned tirelessly against any enfranchisement of the poor and non-whites. These were people who reveled in the fascistic tendencies of Harry Callaghan. These people did speak up, they did have their voices heard and they voted Trump into office. What this means is that Chad is earnestly telling us to stand up for our outdated, worrying fascistic views. That’s the problem with using the silent majority as a lynchpin. It’s not a poetic term. It has a tangible and historically pertinent meaning. As well as this, this record is more political than it has any right to be. How strange is our current cultural climate that Nickelback has released a more politically fiery record than Rise Against. We should be ashamed of ourselves for allowing it to get this far to be honest.

But as always, the true stinkers on any Nickelback album are the power ballads. They’ve been an absolute scourge on the group’s output for well over a decade now. They are nothing more than portentous, bombastic displays of ham-fisted emotion that kill any momentum that the albums might have. If you drew up a list of the lamest songs ever produced, you’d certainly be obliged to give due consideration to the likes of ‘Satellites’ and ‘What Are You Waiting For?’ from No Fixed Address. Here then, the absolute worst cut is the god awful ‘Song on Fire’, a proper “phone in the air” anthem about a terrible relationship with ill-conceived nothings for lyrics. It sounds like the kind of thing Whitesnake would have chucked away. This song is sincere to an almost parodic degree. This song is about me you guys, don’t you get it!? He’s literally feeling all of the emotions. All of them, every single one. And he’s literally putting them in music. Because music is literally the language of feeling. Ok? Literally. Just look what we’re dealing with here:

I could set this song on fire, send it up in smoke

Play it for the world, but it won’t mean much

Unless I sing this song to you

Given what happened recently in Chad’s personal life, this song, and indeed every other song about relationships on this record, is about Avril Lavigne. Again, let that sink in. It’s oddly fitting, isn’t it?

It’s strange because, occasionally, buried beneath the layers of junior high poetics and off-cuts from Reload as performed by TRUSTcompany, there’s the odd moment of genuine quality. This has been one of the more unexpected fixtures across Nickelback albums in recent years. There is always this spark of a good idea buried in there somewhere. They don’t release albums that are entirely devoid of merit. They’re not Kevin Federline for god’s sake. Here, that little flash of quality comes at the very last moment of the record on ‘The Betrayed (Part 1)’. The crux of the song is fairly simple, it is two bright sounding acoustic guitars sparring with one another over a gentle string section. It’s not a million miles from what Metallica have done with acoustic. This is best evidenced in ‘The Betrayed (Part 3)’ which just sounds like a Metallica song with some clean finger plucking. But what makes ‘Part 1’ so enjoyable is that it comes completely out of left field. It plays out like a tiny afterthought, an inconsequential little ditty, and it rounds out the proceedings in an actually quite pleasant fashion. Crucially, it adds a level of dynamism that the rest of the album is utterly lacking. Nothing else on this album is quiet or restrained. It’s all been big riffs played at loud volumes with angry voices yelling GRRR and YEAAH. With the exception of the power ballads, it’s hard to delineate the songs from one another. They’re endlessly dour and self-important and earnest to the point of being disingenuous. Yet, the album finishes off with a tiny, well judged, almost subtle goodbye. It makes absolutely zero sense, but it somehow, someway, actually works. If just for a second. Stopped clocks, eh? Will Murphy

Nickelback – Feed The Machine Will Murphy

Summary: Check out: The Betrayed (Part 1), For The River...I guess