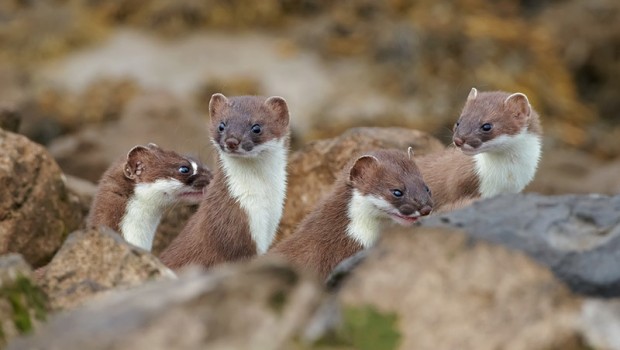 For all the grim reality associated with much of Samuel Beckett’s work there is also, frequently enough, a silver lining of humour. This duality is perfectly illustrated in From an Abandoned Work, a prose piece from 1954/5 intended as part of novel that never materialized – hence the title. It took new life as a ‘meditation for radio’ and was first broadcast by the BBC in 1957.

Here, it is presented in a secret location as a staged reading, something of an experiment by Director Netia Jones, whose production of Stirrings Still featuring Ian McElhinney proved to be one of the highlights of the 2015 edition of Happy Days Enniskillen International Beckett Festival.

Translating Beckett’s work from one medium to another is often problematic – not least because of the hawk-like scrutiny of the Beckett estate – but Happy Days…, under the stewardship of Seán Doran, has consistently risen to such challenges with imaginative solutions.

Past events that have seen audiences sat in rocking chairs, blindfolded for a play intended strictly for radio, or lying prone in dormitory beds in Beckett’s former school of Pretora, attest to that.

Jones faces more immediate personal challenges. The absence of electricity in the rural venue has necessitated the recruitment of a number of car batteries, which only complied and kicked into life an hour before the performance. Technical limitations also mean that it hasn’t been possible to effect the Director’s vision to have the actor mic-end up so that the text could be whispered.

Still, the show must go on, for twenty people have just arrived following a short bus journey from Enniskillen town. It was okay for Beckett to abandon the work in question but Jones doesn’t have the same luxury.

A  walk down a muddy path leads the twenty-strong audience  to a tumble-down, abandoned house, where volunteers with torches guide them into the interior over broken floorboards to a dark room at the back, where a man sits in a chair, bent over, hands clasped together, as though in deep contemplation.

There’s just enough room for fourteen people to sit on chairs and six more to stand against the rear wall, while in a corner, Jones sits at a desk with a laptop.

The heavy tick-tock of a clock – the symbolism of which isn’t immediately clear – instils a hush in the room and stirs actor Ned Dennehy into motion.  He leans forward to pull a fistful of tattered papers from a waste bin and begins to read aloud.

Although the curation and direction is very much the work of Jones, particularly her use of ambient lighting/projections on the wall framing Dennehy, this opening sequence bears the directorial hand of Beckett, who suggested the papers in an ‘ashcan’ idea – with typically precise instructions – to Shivaun O’Casey, who was keen to dramatize the script in the mid-1960s.

The tale, related by a curmudgeonly old man, describes three days during his youth “stravaiging the same old roads in all weather.”

The young man of the tale is a neurotic with parental issues: “to think they’re probably in Paradise they were so good; let me go to hell, that’s all I ask and go on cursing them there, and then look down and hear me – that’ll take some of the shine off their bliss.”

He’s a hypochondriac too, complaining of constant throat and ear irritations, prone to rushes of violence and easily riled by moving obstacles in his path such as snails, slugs and worms, or “birds and butterflies fluttering about and getting in my way.”

It’s easier to laugh at the misery-guts than it is to sympathise greatly with him, especially when, in an unlikely turn of events, he is set upon by “a family or tribe, I do not know, of stoats…”

He confesses to suffering from bursts of sudden rage and is evidently disappointed that beating his head against something provides no cure.

“Not of course that I was really mad,” he reassures, “just a little strange, and with every passing year a little stranger. There can be few stranger creatures going about than me at the present day.”

His head is full of questions that addle him and he repeatedly entertains terminal thoughts, musing on the eventuality of death by water or by fire. Even contemplating the peace of death, he cannot help himself by reflecting upon the “ton of worms in an acre” that would await him. Still, he carries on, “my body doing its best without me.”

In a rage he thrashes the bracken with a stick, unleashing, by his own admission, filthy language that he hope nobody hears and wondering what on earth had possessed him. “Is it the stoats now?”

The repetitiveness of the days troubles him: “…day after day, out, on, round, back, in, like leaves turning or torn and thrown crumpled away…”

He admits to having a soft place in his heart “for all that is over”, reflecting that: “I would have lived my life in a big empty, echoing room with a big old pendulum clock just listening and dozing.”

He stuffs the papers back in the bin.

Today, sixty years after Beckett abandoned this particular literary vein, its protagonist might be labelled variously as OCD, depressed, autistic, or perhaps traumatized by childhood experiences – as opposed to stoats.

There’s no shortage of strange creatures unhappily trudging the byways of life – some greatly afflicted by things much worse than tribes of marauding stoats, others equally afflicted by much less – souls whose inner turmoil might manifest itself in a cascade of swearing or in the thrashing of a bush, and who crave nothing more than peace of mind.

Beckett, in his singular way, reminds us of that. Ian Patterson