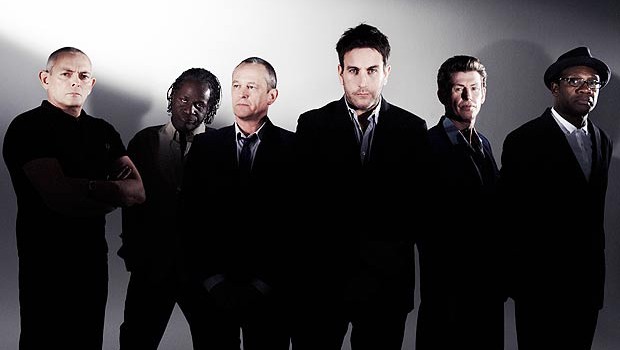 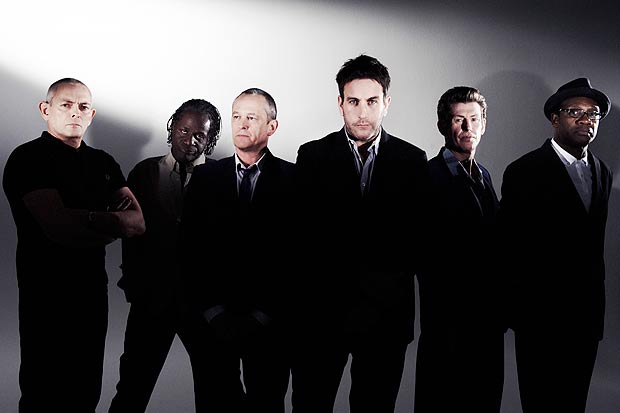 Two years on from their phenomenal performance at Belsonic 2011 – not to mention an astonishing thirty-four years since first performing Queens University way back in 1979 – ska/2-tone pioneers The Specials return to Belfast tonight very much assured of their legendary status. Despite lacking founding member Jerry Dammers since reforming in 2008 and now missing vocalist Neville Staples this year due to health reasons, there is a definite air of celebration and mild hysteria in the air, undoubtedly spurred on by the looming, gratefully-received safety net of a next day Bank Holiday.

Diving straight into the hectic ska of ‘Do The Dog’ as soon as they appear on stage, The Specials immediately evoke a raucous response from their sea of fans. “All you punks and all you teds/National Front and natty dreads,” bellows fifty-four year old frontman Terry Hall, his famous “couldn’t really give a shit, really” expression that little bit more apathetic than usual. Nonetheless, the crowd and the rest of the Specials are sync together from the first bar as the line “Who am I to say, to the IRA, to the UDA, soldier boy from the UK?” is boomed back most vehemently from tonight’s crowd. ‘(Dawning) of A New Era’ and early highlight, ‘Gangsters’, erupt in quick succession, the band’s exemplary cover of the latter Prince Buster song seeing an unprecedented surge of flailing, pushing and chanting at the front.

Whilst there’s no mistaking Hall isn’t quite integrated within the whole set-up for whatever reason, only three songs in and the Specials, as a unit, don’t miss a beat, note or opportunity to capitalise on the ever-mounting sense of occasion. The brilliantly bobbing ‘Blank Expression’ permits a slight lull, the rhythmic intricacies of the song sounding as effortlessly honed and vibrant as ever. Although the absence of Staples is a marked distraction at some points, the crowd – arms raised and eyes closed – are a bustling mass of impossibly appreciative aficionados of every conceivable age and disposition. With Hall all but indisposed, rhythm guitarist Lynval Golding assumes the role of working the crowd. “Are you alright at the back?” he wails as the band burst into the jubilant ‘Rat Race’. Like many of the band’s strongest songs, the lyrics of this mid-set highlight are heavy with present-day pertinence; bongos, organ, jagged ska chords and Hall’s laconic delivery coalescing in fine form, live, yet again.

The wonderfully scathing ‘Hey Little Rich Girl’ follows (the band’s favourite song according to Goulding) before ‘Why’ and ‘It Doesn’t Make It Alright’, two of the band’s finest race-related numbers, warrants an extraordinarily involved response from tonight’s crowd. The chorus of the latter, in particular, sees the band drop out and the venue transformed into one defiant, altogether deafening voice of fraternity. At this point, a trio of string players are suddenly introduced to the set-up, their subtle lines adding colour to and nicely underlying the exquisite work of the brass players. Following a particularly charged version of ‘Friday Night, Saturday Morning’, Terry Hall, visibly more buoyant than before admits, “I was in a really shitty mood earlier –  you’ve really cheered me up. Thank you.” The energy shifts and a rampant ‘Stereotype’ provides the perfect springboard the band’s now classic triptych: ‘Too Much Too Young’, ‘A Message To You Rudi’ and the ever intoxicating ‘Ghost Town’ (keyboardist Nik Torp’s haunting melodica intro, in particular, superbly setting the scene). Looking into the overawed, cavorting mass of bodies, one couldn’t possibly wish for a more ardent audience.

Wishing lead guitarist Roddy Radiation a happy fifty-eighth birthday soon afterwards, Hall, whilst not completely restored, is a much more imposing and compelling figure. Glimmers of his famous – albeit desultory – charisma shine through. A choice word to the audience here, a brief smile to a fellow Special here – certainly, this helps to tie up some loose ends and appease even the most hardened fan grieving from the Dammers/Staples-shaped hole in the band. Having strolled into the wings following the main set for the obligatory waiting game, the Ulster Hall crowd boom the band’s name, bang their feet and make a racket thunderous enough to convince even the most stubborn act to re-emerge. Of course, the two-tone legends re-appear: following their rendition of Dylan’s ‘Maggie’s Farm’ (one can’t help but think of Thatcher’s recent passing), the ultimate “final song” that is ‘You’re Wondering Now’ wraps up proceedings. “You’re wondering now, what to do, now you know this is the end,” the crowd belt in exhausted harmony, The Specials having delivered a set that whilst lacking the same ineffable spirit of Belsonic 2011, new material and Neville Staples, brings into sharp focus once more the power of their music, musicianship, message and ever-apparent, truly spectacular legacy. Brian Coney