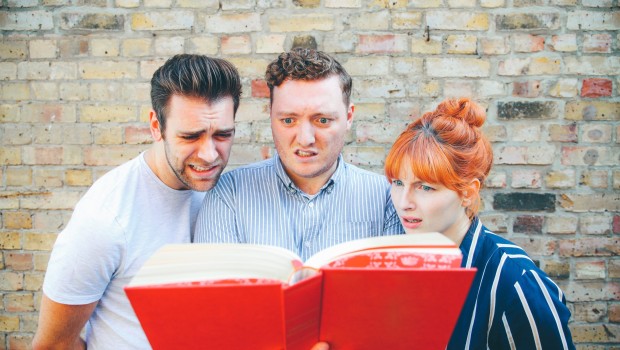 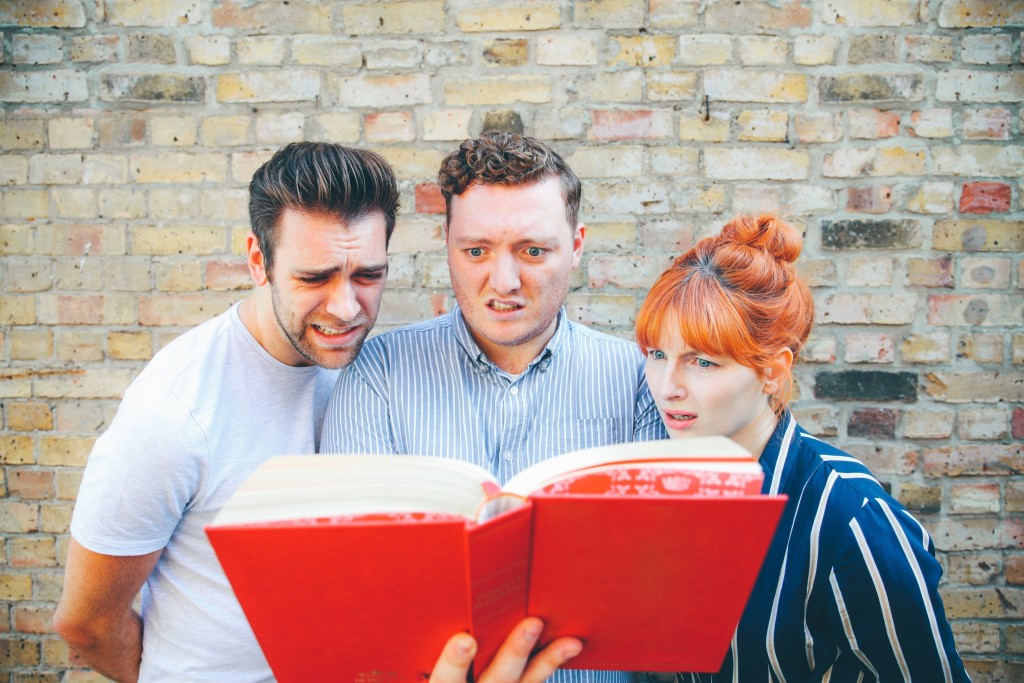 Jaime Morton along with co-hosts Alice Levine and James Cooper come onto the stage to a rapturous applause as Morton sets out to tell the previously unheard tale of Steels Pots and Pans raunchy day of team building exercises. With a selection of white wine, beer and Guinness on hand, Morton and co. plow through the story with all of the wit and charm the podcast has to offer.

The audience is asked to join along in a drinking game, taking gulps whenever unnecessary details are given, an inaccurate description of the female anatomy is used and of course, whenever Belinda blinks. The world of Belinda Blinked is helped come to life by the crowd who are invited on stage to reenact some of the awkwardly worded passages from the story. The hilarity of the podcast has never been so tangible as the room erupts in fits of laughter tearing apart the misogynistic fantasies of Rocky Flinstone (Morton’s Dad, under his suitably unsexy pseudonym of course). Upon hearing a gross misuse of the word ‘Cervix’, Levine launches into a side-splitting powerpoint presentation educating the crowd on some of the finer points of female anatomy, a lesson which would be of great benefit to Rocky himself.

The chapter itself features Belinda alongside Natasha, a Welsh beauty whose voice was generously provided by a member of the crowd attempting his finest accent. After an initial fling between the two, they’re greeted by fan favourites Patrick O’Hamlyn and Ken Dewsbury alongside some of the other regional sales managers from the team. A dubious game of ‘dice’ ensues resulting in a series of sordid events. The plot dips in and out of confusing sexual descriptions and unnecessarily detailed business plots forming perhaps the most quintessential Belinda Blinked scenario yet. As the story climaxes every sentence seems to end in an unintentional punchline. The crowd are in hysterics as Levine and Cooper dissect each line in an attempt to understand just what Flinstone means and whether or not he knows how the mechanics of sex actually work.

This beloved podcast translates perfectly to the stage and there’s a genuine sense from the crowd that they’re witnessing something special. The 90-minute show is fluid and never once feels unnatural. The unlikely success of Belinda Blinked has been made possible by Flinstone’s son who is frequently reminded that the smut he’s reading was written by none other than his own Dad. The show was on a par with any stand up out there and showcased the power of the podcast as a live event. It seems that just like with live music, the intimacy of listening to a podcast by yourself feeds into the excitement of getting to witness one live surrounded by a crowd of fellow faithfuls.  Hugh O’Dwyer