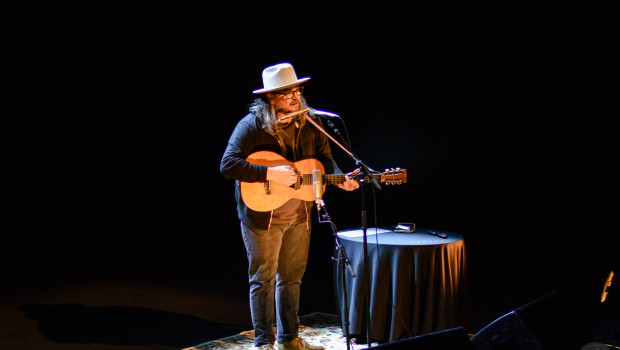 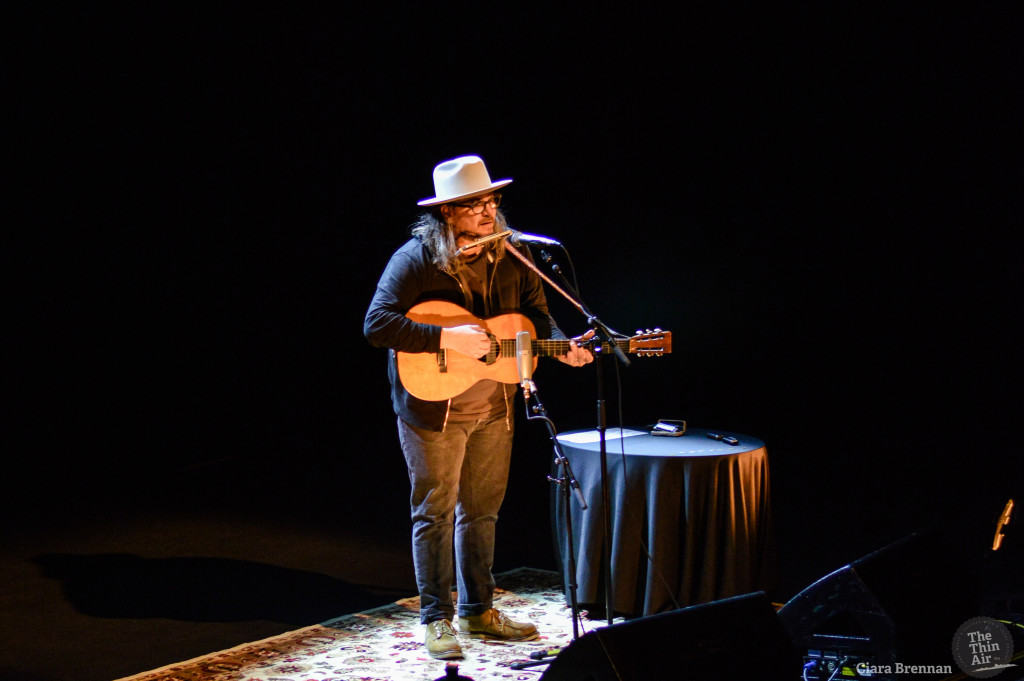 ‘I need to feel uncomfortable’ explains Jeff Tweedy, when asked about his long hair. He hasn’t cut it since the 2016 election he says, and hates it. At the beginning of a year-long hiatus for Wilco, the very same reasoning could be applied to his decision to embark on this short solo acoustic tour across the UK and Ireland.

Bookended by ‘Via Chicago’ and ‘Shot In The Arm’ from 1998’s sugar-coated bitter-suite Summerteeth, tonight’s setlist criss-crosses Tweedy’s back catalogue from Uncle Tupelo to recent Wilco release Schmilco, with some surprising omissions along the way.

There’s nothing from 2014’s solo/family affair Sukeriae for example, or Wilco comeback record Star Wars. Even the recent deluxe reissues of AM and Being There are given short shrift – represented solely by the rarely-performed ‘Passenger Side’. Yet no-one can feel short-changed tonight. ‘I Am Trying To Break Your Heart’ – shorn of its whirring and clanging accompaniment, pulls the audience deeper into the icy wordplay.

It appears at times that he has deliberately chosen songs that are challenging to deliver acoustically. He sounds at war with his instrument during ‘Bull Black Nova’ and ‘One Wing’ from Wilco (The Album), which usually rely heavily on Nels Cline’s jarring electric guitar, but they work. He signs-off the power-pop of ‘Hummingbird’ with an impressive whistling coda that draws wild applause on its conclusion.

Thankfully Jeff is also in garrulous form tonight, handling cheerful hecklers and shouts for requests with a charm that gently puts them in their place and puts the rest of the crowd back at ease. A gleeful stomp through ‘I am The Man Who Loves You’ is halted by Tweedy imitating what he calls “sarcastic, lugubrious clapping” from one over-eager audience member.

He journeys back down Mermaid Avenue with ‘Hesitating Beauty’ and ‘California Stars’ while the Uncle Tupelo years are documented by ‘We’ve Been Had’ and ‘New Madrid’. The edgy shuffle of ‘Locator’ as the only offering from 2016’s largely acoustic Schmilco is another unusual choice.

Three new songs are performed with no indication as to which Tweedy musical vehicle will be their future home. ‘Bombs Above’ and ‘Noah’s Flood’ appear to be influenced by the earthy spirituality and socio-political awareness of recent co-collaborator Mavis Staples. ‘Don’t Forget We All Think About Dying’ taps into the world-weary insecurity of Jeff’s most affecting songs. ‘Jesus Etc’ is one of those, and it’s an obvious highlight as the audience sings along, voices escaping in unison with Tweedy’s for his finest, saddest song.

A raucous audience accompaniment to the disturbing refrain of “Something in my veins, bloodier than blood” from ‘Shot In The Arm’ draws the evening to a close. As the defiant last line “What you once were isn’t what you want to be anymore” rings out he raises his hat and is gone. Whatever a Wilco-less 2018 may bring for Jeff Tweedy, his need for discomfort means he will continue to surprise and inspire. Jonny Currie 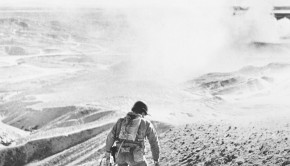