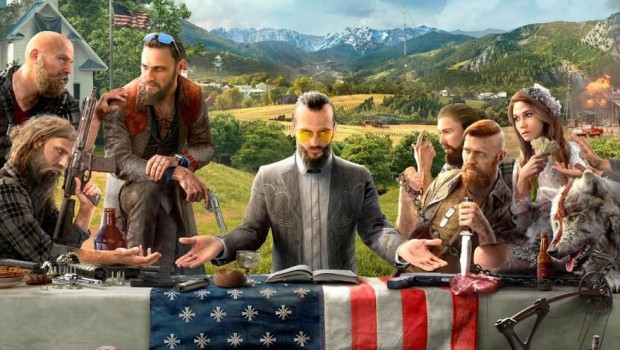 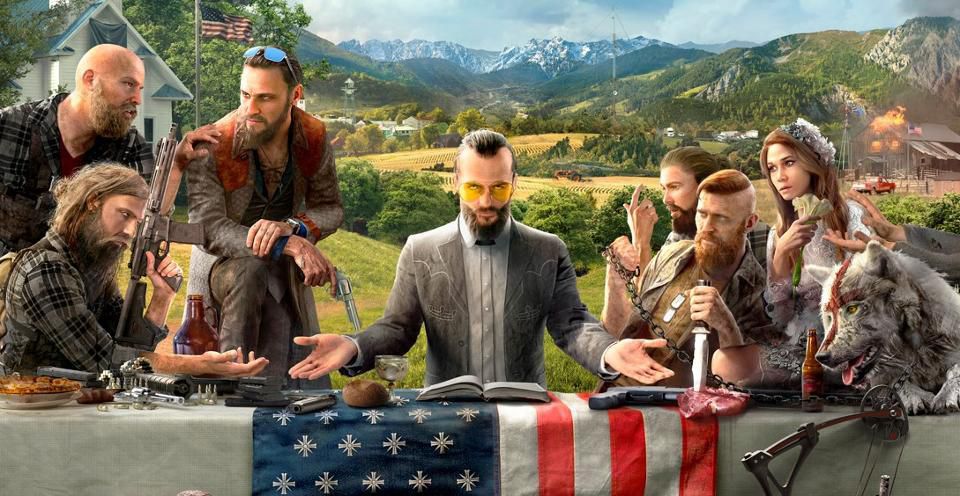 The Far Cry franchise has never been known for its bashfulness but this most recent episode not so much pushes the envelope as takes that envelope and uses next level origami skills to transform it into a lethal weapon. From beginning to end, Far Cry 5 is a no-holds-barred romp of cartoonish ridiculousness, albeit one with a sting in its tail: while other open world games are set in fairy kingdoms or irradiated wastelands, here the player is invited to frolic in a gonzo vision of rural Montana replete with grain silos, roadside diners, white picket houses, plantation mansions and the like. Look for the name Hope County on a map and you will not find it but the imagery rendered here is immediately recognisable and entirely familiar. The contemporary setting is not the only way in which the game wilfully thumbs its nose at the Treasure State and by the same token America as a whole. The central narrative focuses on the rise of hellfire and brimstone preacher Joseph Seed, who has established a doomsday cult not only to sate his own narcissism but also to fuel an expanding criminal empire built on pillars of drug trafficking and human slavery. Seed, the self-appointed “Father”, is cannier than one might expect, so much so that you are led to believe that his proselytising and entirely hypocritical proclamations of faith are facets of a well-honed act. It is one of the qualities that makes Seed such an engaging antagonist.

The Far Cry series has always excelled in presenting charismatic baddies – the dandyish pirate Vaas and flamboyant dissident Pagan Min – but Seed is arguably more terrifying due to his close resemblance to figures we have grown accustomed to viewing on the news. Yes, he is a caricature of corrupt televangelists yet his political stance – the unabashed slavery of the country’s residents, the casual attitude to violence, the elimination of any opponents – cannot be viewed in any way other than a satire on post-Trump era thinking. It feels a little odd to associate gaming with current affairs yet in the case of Far Cry 5 it is unavoidable. The game has a point and it is happy to make it, over and over, through increasingly far-fetched distortions of the radical right and new world paranoia. It is a startling approach that provides many troubling moments of cognitive dissonance: by making you complicit in the slaughter of hundreds of Seed’s minions with the many available weapons in the game’s arsenal, you are repeatedly made to ask yourself why you are enjoying such a spectacle of destruction and how you can justify your actions. Is an eye really worth another eye? Can two wrongs really make one right? To paraphrase Robert De Niro in Casino, if someone comes at you with a knife, is it morally acceptable to come at them with a gun. This last question is even more pertinent in the shadow of so many tragic and shocking shootings – in a world that is ostensibly spinning out of control, is it right to enjoy revelling in virtual murder?

As interesting as all of this philosophising may be, it does not answer the question of how well Far Cry 5 plays. It’s pleasing to report that it plays very well. In an approach typical of the series, you play a rookie thrust into a nightmare scenario that quickly and violently spirals out of control, but elsewhere we see more invention on display. The design team have drawn inspiration from such genre classics as Skyrim, simplifying the HUD and menus to create a more immersive experience when exploring Hope County, a beautiful landscape of forests, mountains and lakes which is full of main missions, side quests and hidden stashes of loot. The latter provides some of the game’s most memorable moments where secret dens and bunkers have to be navigated using a range of environmental manoeuvring and puzzles involving physics and geometry. It is the highest compliment to say that these episodes are reminiscent of sequences from Half-Life 2, which also used balance and gravity to strong effect. The world of Hope County is also populated by a vivid dramatis personae of conspiracy theorists, monster truck acolytes and other oddballs, each of whom offers one or more additional missions and who can upon completion be summoned to join you in the thick of battle. These “guns for hire” also include animals: a vicious hunter dog and a bear called Cheeseburger. The emphasis here is on variety. Cultist strongholds, for example, can be raided stealthily by picking off members silently with a sniper rifle or bow, and you will be rewarded healthily if your presence is undetected, or recklessly: for a laugh, try hopping into a gun turret on top of a pick-up truck and letting rip into an enemy base and see how long it takes before more battalions come for you in jeeps and helicopters. Chaos, it seems, is never far away.

One of the ways in which Far Cry 5 deviates from tradition is through the introduction of multiple villains: each of the individual members of Joseph’s extended family run a different region of the county, and each has their own personal interests and motivations. Faith, for example, part girl next door, part Pablo Escobar, speaks in soft tones about benevolence and revelation yet her primary interest is in shipping Bliss, a hallucinatory drug that has turned its users into zombies – the fast, rabid kind. Encountering Faith will inevitably lead to one of Far Cry’s patented trips into delirium, accompanied by swirling colours and lilting music. Again, this is nothing new but the way in which her storyline converges with those of her comrades is a neat touch. Then again, one does not expect too much subtlety from a game in which you can steal a seaplane and fly it into a radio mast before parachuting out and setting fire to the guards with a neon flamethrower.

Far Cry 5, then, is a beast with two heads: on the surface it is rollicking action game that is unapologetic in its nonsensical violence; underneath, it is a biting commentary on the state of things in our broken world. The fact that both co-exist, and that the player can enjoy one whilst ignoring the other, is a testament to the development team’s skill and vision. Ross Thompson