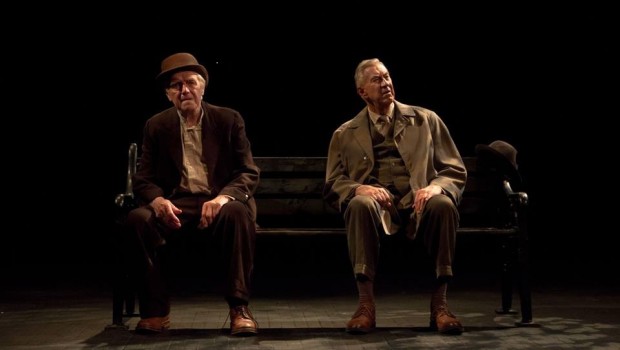 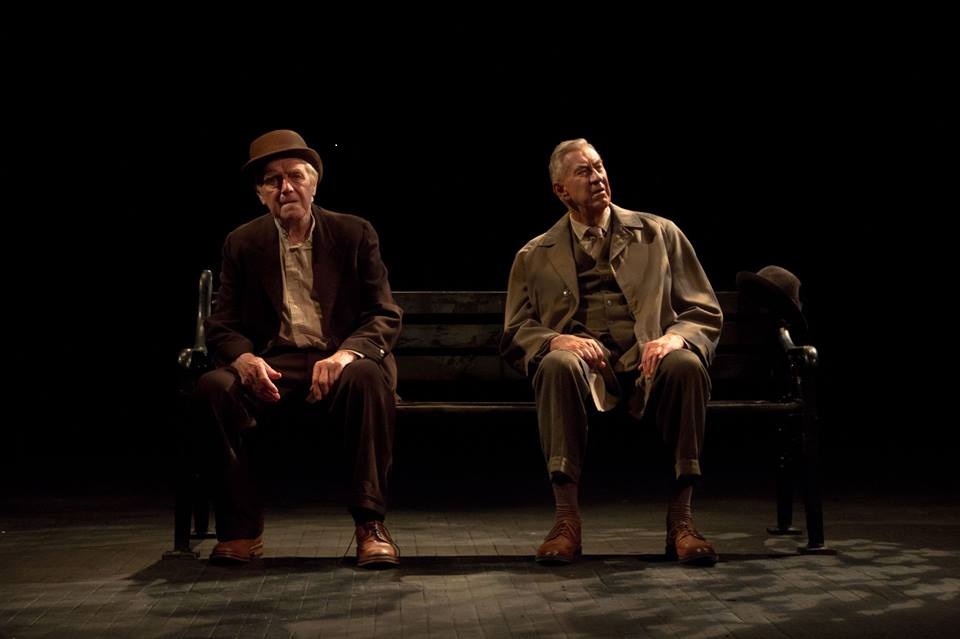 One of the great things about the Happy Days Enniskillen Beckett Festival – and there are many – is the opportunity to experience rarely performed Samuel Beckett plays. The Old Tune, for one, doesn’t get too many run outs. Perhaps that’s because it’s comedic portrayal of two elderly men struggling with memory and the onslaught of modernity is considered too light for serious Beckett actors and directors – anxious to sink their teeth into the meatier existential stuff. However, in the hands of nuanced actors Barry McGovern and Eamon Morrisey, and with the subtle guidance of Director Conall Morrison, the comedy is starkly shadowed by the poignancy of loneliness, human frailties and mortality.

Beckett adapted The Old Tune from his friend Robert Pinget’s 1960 play La Manivelle (The Crank), translating it into English and moving the setting from Paris to Dublin. Gorman (Morrisey), an organ grinder, whose contraption, like him, has known better days -‘there we go, bust again’ – runs into Cream (McGovern), an old friend he hasn’t seen for years. They sit down on a bench and catch up on family news.

One of Cream’s daughters has died. Gorman’s wife is ‘still in it.’ The sound of a car roaring past irritates them. ‘They’d tear you to fritters with their flaming machines,’ gripes Gorman. They reminisces about a pre-car world full of bluebell fields, peace and quiet, barouches and broughams; even the names of horse-drawn carriages belong to a by-gone era. At times their thoughts are hijacked by long silences and seemingly cast adrift.

Silences, music drifting in and out, broken thoughts, the place of memory, the future rushing forward as the past recedes even quicker- whilst The Old Tune may not be typical of Beckett’s oeuvre, it contains plenty of the playwright’s everyday currency.

The old mens’ memories clash over the first car in town – a Pic-Pic says Gorman, a Dee Dyan argues Cream, driven by the vintner, [wine merchant] Wougham. Bathing in nostalgia, the two concur that in those days ‘you had to work for your living…yes by God’. The roar of another car disturbs them. ‘…all this speed,’ grumbles Cream, ‘…it has the whole place ruinated, even the weather.’ Even the weather, it seems, was better in the old days.

They recall the hot summer of ’95, the jug and water in the days before running water. Things were built better then as well, not like all these gazebos, Gorman complains, ‘springing up like thistles…collapse if you look at them…’ Not like the ‘good stone made the cathedrals,’ Cream chips in.

After rummaging through his pockets for a packet of smokes – ‘the daughter must have whipped them again’ – Cream pulls out a couple of fags. Black Shag tobacco, no less. ‘Fit for royalty,’ Cream purrs, dismissing today’s ‘gaspers’ as ‘not worth a fiddler’s.’ Between them, they have no lighter. ‘The bitch, sure as a gun she must have whipped it too’ curses Cream.

Passers-by are in too much of a hurry, to wrapped up in their own worlds, to offer a light. “No thought for the old”, laments Gorman. The fags remain unlit. “When you think, when you think…” – the thought drifts away, leaving a void.

The two old compadres bicker amicably about where they were stationed when they enrolled in the forces. Names are confused, or irritatingly elusive. The biggest event of their lives, the mobilization and the war – ‘the very start of the war,’ recalls Gorman, ‘when we still didn’t believe it’ – is something of a blur.

They swap family news – divorces, infant mortality and the like. Gorman declares: ‘Mrs Cream must be a proud woman to be a grandmother’, though is a little nonplussed when Cream informs him that his wife is dead these twenty years. Cream struggles to remember the names of his grandchildren.

McGovern and Morrissey’s comic timing, and the weight they invest in their showings of exasperation, confusion, cantankerous disbelief and contrariness is pitch-perfect. As in all Beckett’s work, the rhythm of the lines is key and in this regard the two veteran actors excel. It’s a small step, in a way, from the comedic duologue of Cream and Gorman to Pete and Dud and a couple of decades later, Alas Smith and Jones.

They debate the value of moon exploration. ‘The moon is the moon and cheese is cheese’, Cream says dismissively of the notion of ‘progress’.  They argue the toss over the year of the great frost, the year of a fire, but happily agree on the beauties that fired the passions of their youth.

The cars roar by with increasing frequency, the conversation tails off. Time for one last fag before they part company. ‘What did I do with those cigarettes?’ ponders Cream.

‘When you think…when you think…’ Gorman utters, to himself, to the air. The organ starts up once again, the sounds of the street intrude. The two old men stare straight ahead, mouths ajar as though shell-shocked – lost in their private thoughts, or perhaps striving desperately to retrieve fading memories.

Barry McGovern and Eamon Morrisey’s brilliant performances in The Old Tune will live long in the memory, or at least until the memory starts to fade with the charging future. Was it the 5th Happy Days International Enniskillen Beckett Festival, or the 6th? It was in the Ardowen Theatre. No, it was The Regal, dammit, I still have the program. McGovern? No, I remember it clearly – it was that Ian McElhinney. It was that hot summer – that was a scorcher alright! Didn’t it rain a lot? When you think… Ian Patterson