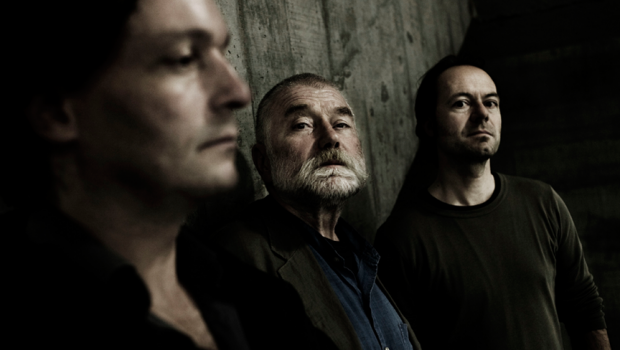 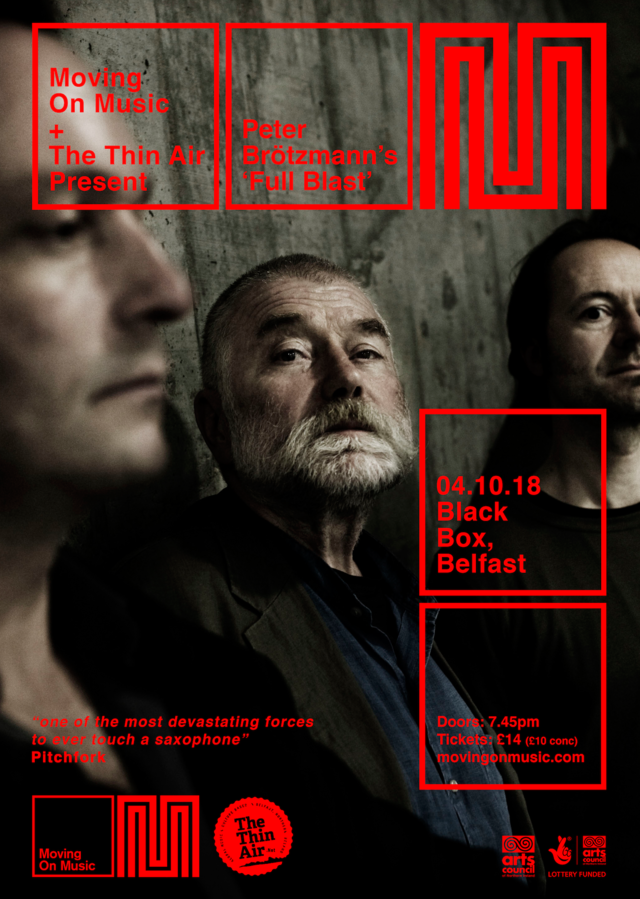 For over fifty years, German saxophonist & clarinettist Peter Brötzmann has exemplified European improvised music. His excoriating, volatile style soundtracked a continent ravaged by division & civil unrest, tearing up convention and laying the groundwork for the defiant late 60s European avant-garde. Pitchfork describes him as “one of the most devastating forces to ever touch a saxophone”. In the first of what’s planned to be an ongoing collaboration, we’re delighted to co-present his Full Blast project, in partnership with esteemed Belfast-based tastemakers Moving On Music.

Self-taught on saxophone, Brötzmann was originally a painter, schooled in the Cage-influenced Fluxus movement in before moving through Dixieland, ultimately turning his hand to free jazz. His first recording, For Adolphe Sax, was released in 1967, but it was in the following year that his most enduring, pioneeringly aggressive work, Machine Gun, was self-released with an octet that featured radical Dutch & British musicians Willem Breuker, Fred Van Hove, Han Bennink, and Evan Parker. Its sessions were a by-product of the Total Music Meeting, an alternative to the more mainstream Berlin Days Jazz Festival, and a cross-Atlantic echo of the advancement of free jazz in the US by Coltrane, Mingus, Coleman and the likes. Consistently listed among the most notable free jazz records and one of the Guardian’s 50 Moments in Jazz, Machine Gun’s staccato, militaristic proto-thrash-jazz remains as vital and evocative a production fifty years later.

He would go on to collaborate in prolific fashion alongside the Instant Composers Pool throughout the 70s, especially alongside founding member Bennink over the years. Ever the iconoclasts, one record, Schwarzwaldfahrt, was made beside the Black Forest, which saw Brötzmann duet with Bennink, characteristically repurposing trees & found forest objects for percussion. In the eighties, he was one of four punk-minded jazz players with experimental, metallic supergroup Last Exit, who mined art from the ugliness of digitised 80s metal production for a string of acclaimed albums. With his number of features on records in triple figures, however, these are just a few noteworthy releases. While not easy to track down, a glimpse of his approach to art & life can be seen in 2011 documentary Soldier On The Road: A Portrait of Peter Brötzmann, and the interview collection We Thought We Could Change The World, which chronicles his thoughts about city rats, art processes and the Second World War.

By now his most consistent and longest running project, Peter Brötzmann’s Full Blast features the dynamic precision of Swiss rhythm section Marino Pliakas and Michael Wertmüller, with whom he has recorded four albums. Their fifth, Rio, is released the day after their Belfast performance, and treads in electronics, unique mixing techniques and further uncharted terrain for the uncompromising nonconformists. As has been a throughline across Brötzmann’s maverick trajectory, their appeal lies not just to free jazz musos, but to any fan of noise rock or defiant, extreme music – and it’s this spirit that makes this concert a logical startpoint for the partnership between ourselves and Moving On Music.

Peter Brötzmann’s Full Blast bring their “cleansing tornado” of a live show to the Black Box on Thursday, October 4. Tickets are available from Moving On Music, priced £10-£14. Doors open at 7.45pm.