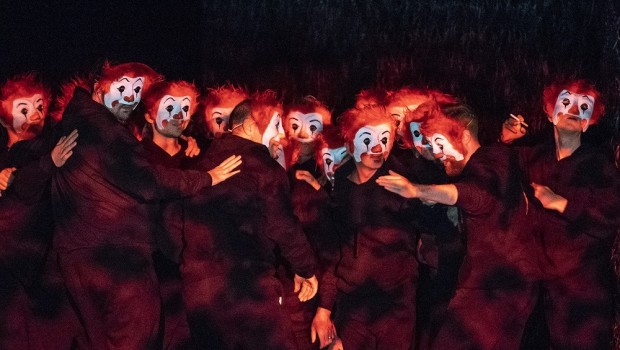 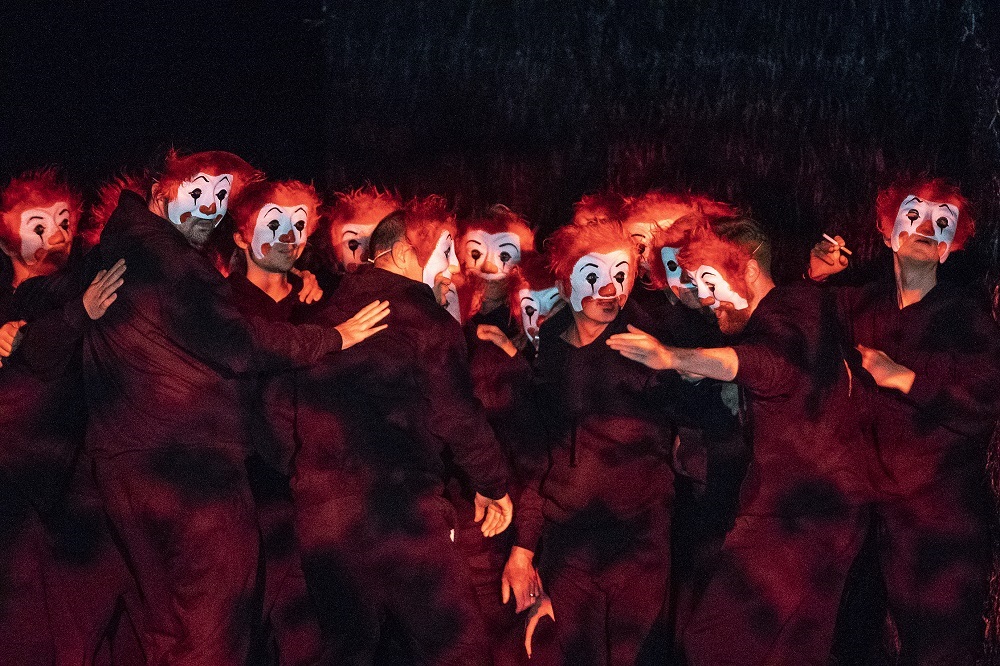 It’s entirely apt that Northern Ireland Opera’s staging of Giuseppe Verdi’s Rigoletto should be set in modern times. Apt because its salient themes – celebrity and vanity; the objectification of women and the presumed privileges of patriarchal society; the dangers of herd mentality; and, in an age of #MeToo and on-line trolling, the consequences of bullying and mockery – all resonate loudly today.

A cast of international opera stars grace the Grand Opera House stage for this powerful NI Opera production, but the other protagonist is the set (Kaspar Glarner) – a brilliantly conceived jig-saw of thirty two interlocking, rotating walls that allow for swift and dramatic scene changes.

Shipped in from Chile – with the co-operation of Ópera Nacional de Chile,  – the ceiling-high walls were pieced together in an unheated warehouse in Belfast harbour and, appropriately – though arguably insanely – delivered with police escort to the Grand Opera House on Belfast Culture Night.

From mid-August carpentry to curtains-up by the end of September, this production has been turned out remarkably quickly – not least given that the singers had to learn Francesco Maria Piave’s Italian libretto – mid-nineteenth century Italian, to boot. Based on these can-do efforts in the face of such logistical mountains alone, NI Opera would seem better qualified to run Stormont than the current in-house jesters.

Rigoletto, (baritone, Sebastian Catana), the hunchbacked court jester to the womanizing Duke of Mantua (tenor, Davide Giusti), is a figure of Shakespearean depth – his character a twisted binary of hatred and love, each, in the end, as damaging as the other. During the ominous first part of the preludio, a darkly symbolic directorial touch frames Rigoletto against a Bible-black backdrop, between a coffin and a scoliosis brace. It suggests that it is the premature death of his wife and the cruel deformity dealt Rigoletto that embitter him and drives his fatal folly, rather than the weight of the old man Monterone’s (baritone, Simon Thorpe) curse, which comes in response to the jester’s cruel mockery regarding Monterone’s daughter’s honor. 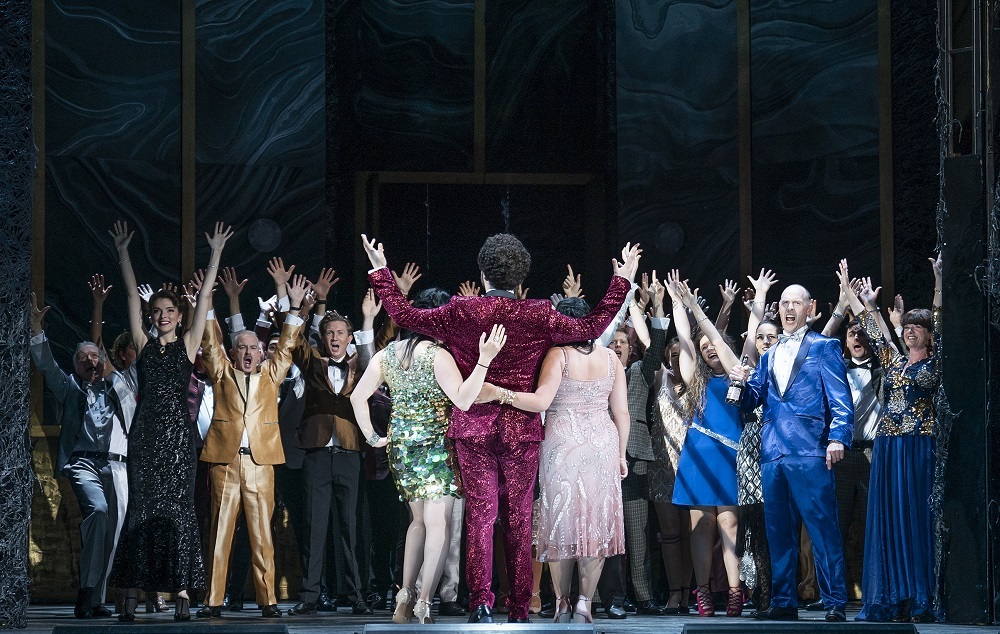 The jolly second part of the preludio sees the NI Opera chorus (directed by Tom Seligman) partying in the Duke of Mantua’s palace, the drunken, sexually-charged air typified by The Duke’s rousing aria “Questa Quella”, (‘this one or that one’), which celebrates women as so much meat. The censors in 19th century Italy were scandalized by Verdi’s portrayal of the ruling classes, based on Victor Hugo’s polemic play Le Roi s’amuse, though censors and ruling classes, it has to be said, are often one and the same thing.

One and a half centuries later, Australian director Lindy Hume’s setting of Rigoletto in the bacchanalian party world of former Italian Prime Minister Silvio Berlusconi offered a particulary wry commentary on the historical continuity of the abuse of privilege.

For all the thrilling music, the dashing choruses and spiralling duets, there is at the core of Verdi’s Rigoletto a dark vein, a slightly queasy underbelly. The dark side of the soul, of human nature, is suggested by the black backdrops and dramatic lighting (Wolfgang Goebbel) that casts towering shadows onto the walls. Shadow and fate.

Rigoletto keeps his daughter Gilda (soprano, Nadine Koutcher) under lock and key at home, only allowing her to leave the house to attend church. It’s the best way, he believes, to protect her purity, though her cloistered existence and innocence – signified by pyjamas and a teddy bear-festooned bed – only makes her easy prey when she eventually crosses paths with the amorously rapacious Duke.

Catana gives a commanding performance in what is surely one of opera’s more demanding roles, his rich baritone toggling between stormy passion and movingly tender confessionals. No less impressive is Giusti, whose tenor voice portrays the lusty yet coy libertine that is the Duke of Mantua to perfection. Giusti’s rendition of the opera’s greatest hit, “La donna e mobile” – as famous a tune as any to ever come out of Italy – is fun, but it’s in the meatier emotional scenes where the Italian tenor really shines.

The Duke’s feelings for Gilda – or lack thereof – are ambiguous, as are to some degree the forces driving Rigoletto towards the opera’s grisly conclusion. These elements of the libretto that are open to personal interpretation leave refreshingly unresolved tensions hanging over the storyline.

There’s no doubting, however, the hatred in Rigoletto’s heart when he contracts the assassin Sparafucile (bass, Taras Berezhansky) to murder The Duke in revenge for his wooing of Gilda – abducted from Rigoletto’s home and spirited to the palace by The Duke’s mob of hangers-on.

The opera’s tragic finale comes when Rigoletto discovers that Sparafucile, aided by his sister Maddalena (contralto, Fleur Barron) has murdered Gilda instead – sparing the Duke at the besotted Maddalena’s request. To his anguish, Rigoletto finds the dying Gilda in a sack bound for the river bed, though there is time for a stirring, death-bed duet between father and daughter. 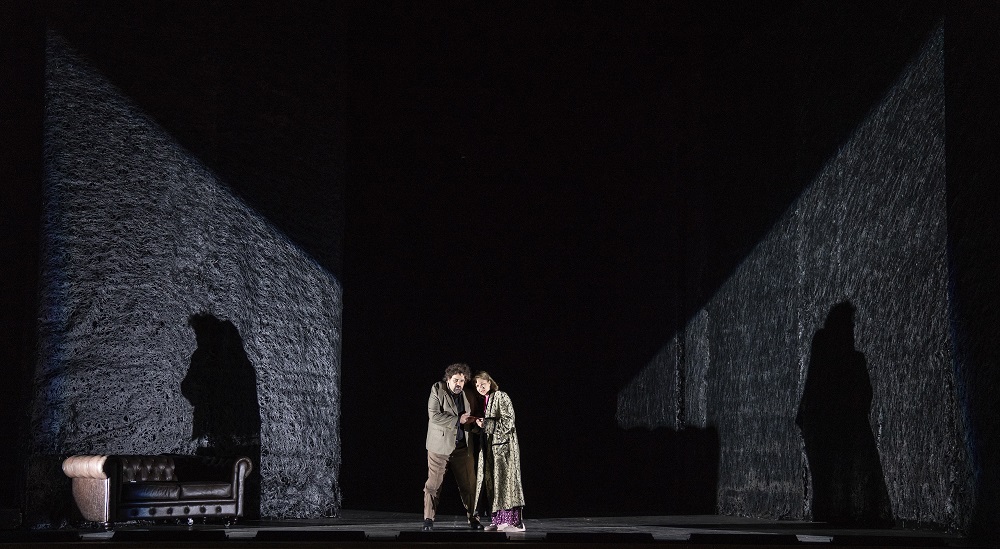 Verdi’s vibrant and strikingly varied score is beautifully interpreted by the Ulster Orchestra under the baton of Gareth Hancock. The orchestral score, which could robustly stand alone, is intimately interwoven with the singing parts, though there is plenty of sympathetic background too. The rumbling thunder and surging wind of the storm that foreshadows the tragedy of Act 3, conjured respectively by timpani and the NI Opera singers, is a minor highlight. It’s the three principal singers, however, who time and again win applause with a series of winning duets and arias.

Outstanding though is Koutcher, winner of the Cardiff Singer of the World Competition 2015, and a star in the making. Her aria in Act One, where she recognizes the stirring of her heart strings for the Duke is jaw-droppingly good – a voice of other-worldly qualities.

This NI Opera production of Rigoletto opened its doors and its heart to the Northern Irish public through a series of work-shops for children, open rehearsals and pre-show talks. It’s this sort of enlightened outreach by director Walter Sutcliffe and his team that can only pay dividends, because with opera, all you have to do is get the people to come. The glorious music, the extraordinary singing, the dramatic mise-en-scène, and the echoes of Greek tragedy- all exemplified in abundance by Rigoletto – will do the rest. Opera at its most seductive. Ian Patterson 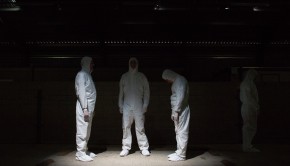