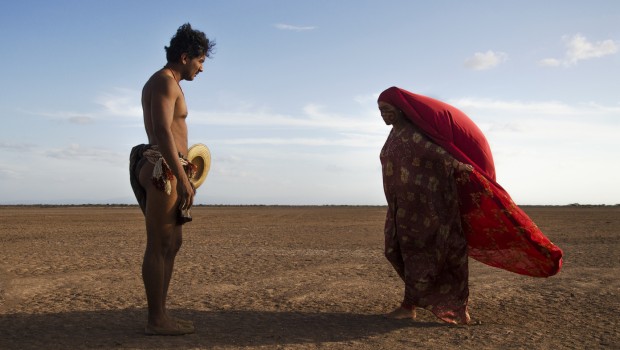 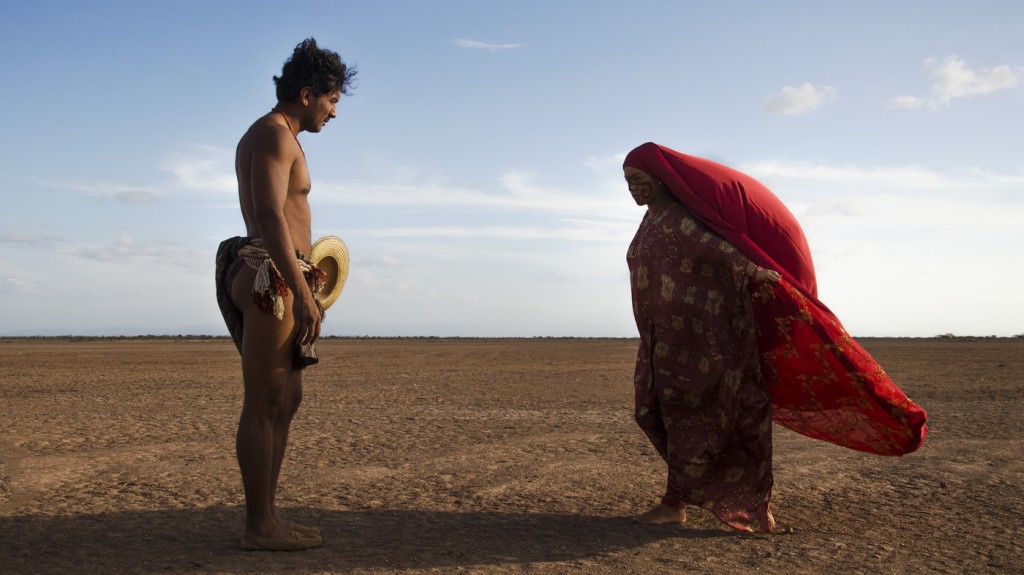 Plagues, locusts and temptation in the desert: Birds of Passage is biblical in its grandeur and moral ruin.

The current cultural fetizishation of drug cartel savagery is vampiric and lazy racism. Can-you-believe-this travelogues and “dark tourism” tours take the cash of white hipsters to show them the houses where monsters lived, while much TV and film deploys stock montages of whirring cash counting machines, biped planes stuffed with narcotics and South Americans going loco, bro. But Cristina Gallego and Ciro Guerra’s follow-up to 2015’s Oscar-nominated Embrace of the Serpent cuts through the fake glamour and returns to the roots of Narco chaos in tribal Colombia, for a big, broody, terrifying crime epic that understands violence for what it is: a violation of the sacred. The film stinks of original sin.

Birds of Passage opens with a flourish of indigenous energy and colour. Zaida (Natalia Reyes), a young Wayuu woman, has been in confinement for a year to mark her transition into adulthood and fertility. Returned to the world, she engages in a ceremonial dance with potential suitors, running scarlet matador circles, arms out wide in avian triumph. It’s imagery ripe for World Cinema appreciation, but the rituals of the Wayuu people aren’t just ethno-technicolour show; they’re part of a careful machinery of order and resolution. Maria Camila Arias and Jacques Toulemond Vidal screenplay lays out in gradual detail what happens when systems of containment fail.

Part of the tragedy is that the Wayuu invite the carnage in themselves. Rapayet (José Acosta) is introduced to the Pushaina family as a husband for Zaida, but as a relative outsider with links to the alijunas (drug traders) and only a faint connection with clan traditions, he is viewed with suspicion. The imposing matriarch Úrsula (Carmiña Martínez) demands a sizeable dowry of animals and treasures, forcing her future son-in-law and his trigger-happy mate Moisés (Jhon Narváez, the very definition of future liability) to do marijuana business with Californian Peace Corps gringos. They make a lot of money, and they keep making a lot of money, and with it come questions of territory, control and how to keep these nice new houses, modernist squats on empty earth, safe.

In its steady escalation of horror, its focus on how ambition disrupts traditional clan structures, the seriousness with which it takes bloodshed, and the ancient, lamenting waste of it all, Birds of Passage sings in a key students of Shakespeare’s Macbeth will recognise. The wailing woodwind instruments on the score have a faint Highland feel to them, and the superstitions and obsession with dreams and ghosts are there too. When conflicts come to a head in the film’s fourth and final canto (“War”), Rapayet has the dead man eyes of the king who is in blood stepp’d in so far.

Haunting dream imagery and the slightly surreal presence of spirit animals connect the Wayuu with a bigger mystical and ethical impetus, and with marijuana money, car radios and alcohol comes a falling away, a smirking, bored malice embodied by Úrsula’s teenage son and heir Leonidas (Greider Meza). Rejecting the “respect” of family, but unable to move beyond half-cut resentment, his transgression — one too big for the tribe’s usual metrics of apology and appeasement — is inevitable, and kicks the tone into one of full-bodied, gripping crisis. Poetic and lucid, Birds of Passage flutters behind the eyelids for a long time. Conor Smyth

Birds of Passage will be released in the UK on 17th May. The Belfast Film Festival runs across the city until 20th April.