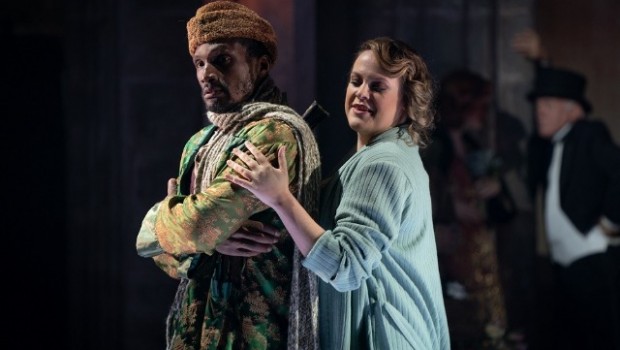 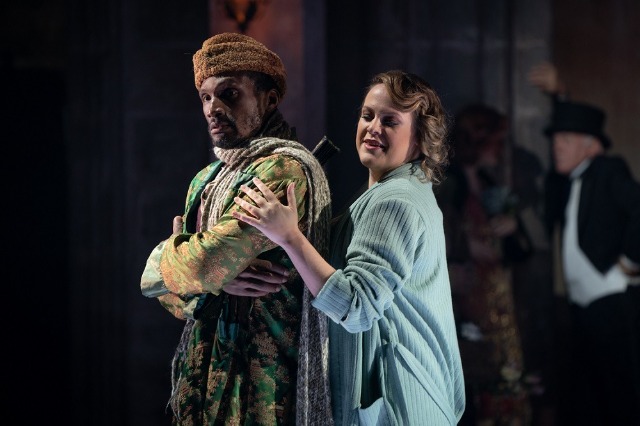 The venue for Northern Ireland Opera’s comeback opera after eighteen months of Covid-19-inflicted anxiety, lockdown and isolation was different – an abandoned 19th century church, as opposed to the Grand Opera House. The socially distanced crowd in this former place of worship was small – ninety instead of the usual thousand that typically pack Belfast’s opera house. But one thing had not changed in the interminable, surreal interim – NI Opera’s capacity to deliver a world class show.

Giacomo Puccini’s enduringly popular La Bohème may have seemed like a safe bet for the full-scale debut of NI Opera’s new Artistic Director, Cameron Menzies, but in many ways it was the perfect choice.

The depiction of young artists struggling to pay the rent and not knowing where the next paycheck is coming from may be just the backdrop to the tragic love story between La Bohème’s main protagonists, Rodolfo and Mimi, but it represents an all too familiar scenario, wherever you look, in these turbulent times.

And the bohemians’ love of a good time, their youthful zest, amorous adventures and desire for social company are reminders of some of the basic human drivers that have been so curtailed during the Covid-19 pandemic.

On passing the impressive entrance of the Carlisle Memorial church, audience members are regaled by a lone accordionist, his melodious Parisian airs a reminder of La Bohème’s location in Paris’ Latin Quarter. The location may be sacrosanct, but from the libretto’s original setting of 1830, Menzies transplants the story to the 1920s.

After the horrific toll on human life exacted by World War I and the devastating Spanish flu pandemic that followed, the French were in the mood to party. It was an exciting time. As in other major capitals of the world the automobile took the place of carriages and trams. Silent movies drew crowds in their droves to the new picture houses. Art too, was modernizing.

Jazz, which had arrived with American soldiers and expatriates, provided a heady soundtrack to all the revelry. Not for nothing was the period known as Les Années Folles – the mad years. The French just wanted to embrace life again. Sound familiar?

The stage for NI Opera’s first major production in many moons is small but boasts a striking feature in the form of a square passerelle that runs around the sunken orchestra pit, which houses the string section. In a wing to the left of the pit are the woodwinds and harp. On the right, brass and percussion. The audience looks on from a specially constructed tiered seating bank. It is an impressive tableau. 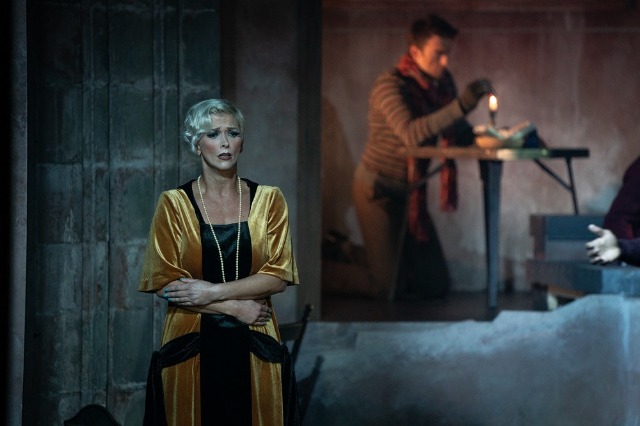 Just before the show starts, NI Opera’s Artistic Director Menzies welcomes the audience, briefly relating some of the challenges faced in mounting the production and expressing the company’s joy at its return to major operatic performance.

An unusual aspect of Puccini’s score is the brevity of the prelude. Almost immediately, the audience is pulled into the story.

In a freezing garret on Christmas Eve, the painter Marcello (Yuriy Yurchuk) the writer Rodolfo (Noah Stewart) engage in banter, deciding to burn Rodolfo’s manuscript, which at least has the value of keeping them warm. Soon they are joined by the philosopher Colline (Edmund Danon) and the musician Schaunard (Aaron O’Hare) who bring warming food, wine and money.

When the landlord Benoît (Graeme Danby) arrives in search of the rent, the four bohemians ply him with drink and trick him into confessing some of his saucy exploits. Feigning indignation and shock, they bundle him out of the room. The young men decide to head out to Café Momus, leaving Rodolfo to finish his writing.

The call and response of bartitone and tenor jousting gives way to gentler lyricism when the boys exit for the bright lights of the Latin Quarter, and a neighbour, a poor seamstress called Mimi (soprano, Gemma Summerfield) arrives, asking Rodolfo for a light for her candle. It is love at first sight, and with an empathetic shift in gear the music quicky enters the realm of the sublime. Spine-tingling back-to-back arias, “Che gelida manina” by Stewart and “Si, mi chiamano Mimi” by Summerfield, and their barnstorming duet that follows, “Oh suave fanciulla”, crown Act One in splendid style.

Puccini’s music cohabits every nuance of the unfolding drama, particularly the relationship between Rodolfo and Mimi. The orchestra, conducted by Rebecca Lang with equal measures passion, grace and precision, merits special mention. NI Opera took the commendable decision to spread the love by assembling freelance musicians–who must have endured a pretty miserable lockdown—instead of its usual partner, the Ulster Orchestra.

The company’s faith is rewarded with a flawless orchestral performance, with the lush string arrangements in particular benefitting from the church’s excellent acoustics.

Seamlessly, Act Two transports the action to Paris’ bustling Latin Quarter where a colorful array of street hawkers and a fortune teller ply their respective trades to rousing orchestral accompaniment. Dancers weave in out, with two identically attired clowns (Katie Vaughn and Molly Vaughn) bringing a wonderful blend of impish playfulness and balletic grace to the lively mis-en-scene. 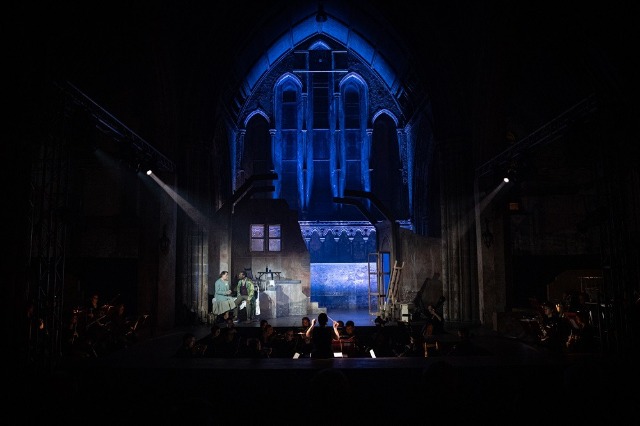 At Café Momus, the painter, the musician and the philosopher are joined by Rodolfo and Mimi. The young writer has bought his new-found love a pretty bonnet. As the wine flows the discussion turns to the nature of love but Marcello’s nerves are set on edge by the arrival of his ex-lover, the flamboyant Musetta (Emma Morwood), with her sugar daddy Alcindoro (Graeme Danby) in tow.

Musetta, who still has feelings for her old flame, sends Alcindoro away with the excuse that her foot hurts and she needs him to bring her a new shoe. With the old gentleman out of the frame the former lovers rekindle their passions.

The musical highlight here is Musetta’s aria “Quando m’en vo,” beautifully rendered by Morwood, who is only denied a deserved ovation by the unrelenting pace of the story. The Belfast-born soprano’s sparkling debut with NI Opera will linger in the memory.

With insufficient money between them to pay the restaurant bill, the young bohemians split. To multi-colored confetti of flashing lights and celebratory fanfare, the bohemians join the Christmas Eve throng, parading around the passerelle in jubilant spirits. Poor old Alcindoro’s evening goes from bad to worse as he returns to find himself burdened with the tab. 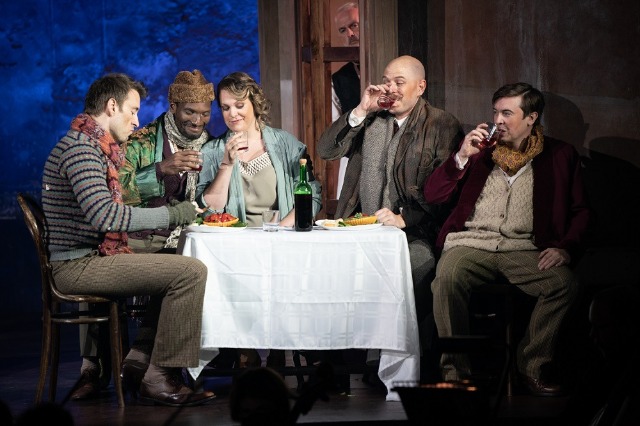 From Act Three onwards the tale takes on an increasingly tragic air, the acting a more somber tone and the singing a greater emotional intensity. The exchanges between Stewart and Summerfield are hypnotic, but when joined by Yurchuk and Morwood as the separate dialogs intertwine, the power of these four voices soaring simultaneously is almost overwhelming.

Mimi, who is clearly unwell, confides in Marcello that Rodolfo’s jealousy is making their lives a misery. She hides when Rodolfo arrives. He also confesses to Marcello that Mimi is dying, brought on, he fears, by his poverty. Rodolfo hears Mimi cry out and hurries to her side. Still in love despite their difficulties, they agree to await until spring before separating.

Act Four finds Rodolfo and Marcello back in the bachelor pad. They compare notes on their misery in being alone. The arrival of Colline and Schaunard lifts their mood, though their spirited play is interrupted by Musetta who brings news that Mimi, who is outside and too weak to mount the stairs, is close to death’s door.

In the final stretch of the score Puccini recycles motifs and melodic lines from earlier in the opera, thereby conjuring an air of nostalgia as the lovers meet once more, and, in a way, bringing the story full circle. 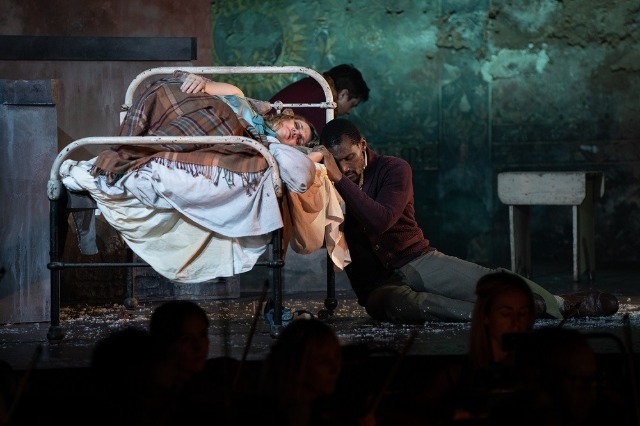 The young friends bring Mimi in and do all they can to make her comfortable, but her coughing intensifies and before their eyes, and despite their prayers, she dies.

A standing ovation greets the cast and NI Opera’s creative team. It has been an outstanding ensemble production, with Stewart and Summerfield in the lead roles giving towering performances of emotive heft.

In years to come, NI opera’s staging of La Bohème will surely rank as one of the company’s greatest achievements, for reasons both musical and non-musical. Pandemics may come and go, but young love – and great opera – will never go out of fashion.