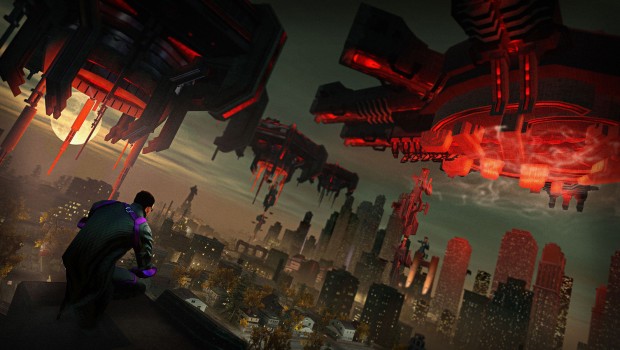 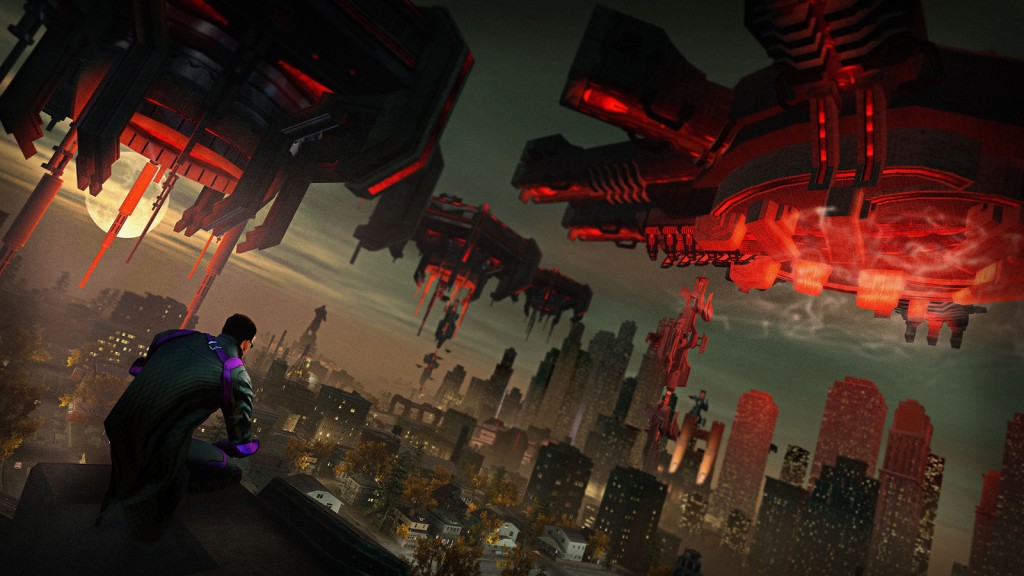 “With great power comes great irresponsibility” should be the motto of Saints Row IV, which escalates mischief-making to ridiculous levels in a series of increasingly over the top missions. The central mechanics should be familiar to anyone who has invested even a few minutes in a “sandbox” title: you are presented with a fully accessible city packed with challenges such as timed races, shooting galleries and escort quests. However, you will more likely spend your time running riot by blowing stuff up, gesticulating rudely at pedestrians and generally acting the jackass. Saints Row IV stretches this idea like silly putty way, way past the boundaries of credibility. It takes the generic bleh-town of Steelport and scrambles it with an alien invasion and a simulated reality a la The Matrix. And that is only the beginning of the random strangeness. One of the benefits of being inside this videogame inside a videogame is that your character, who has recently been elected the Leader of the Free World and pimped the White House into a den of pole-dancing iniquity, has been given superpowers. You can leap tall buildings in a single bound. You can run faster than a speeding bullet. You can… well, you get the idea.

If all of this sounds like nonsense when written down then that is precisely the point. Developers Volition have thrown the rulebook out the window in terms of realism, accuracy and anything approaching seriousness. The kitchen sink approach is deliberately disorientating. Want to clamber up and defuse an airborne nuclear warhead to the strains of Aerosmith’s ‘I Don’t Wanna Miss A Thing’? No problem. Want to do a jaunty walk through an ersatz Leave It To Beaver white picket fence town? Sure thing. Want to flick cars in the air as if they are peanuts, their drivers wailing as they shoot through the air? Why not. This “why not” philosophy pervades every pixel of Saints Row IV, which regularly runs the gamut from infantile to inspired but is always a lot of fun.

And that point is crucial: in comparison with most open world titles, which are bogged down in po-faced self-importance, this one values fun more highly than everything else. Admittedly, it is an ethos which does not always work. Firstly, there is no characterisation whatsoever – The President and his potty-mouthed homies epitomise the Seinfeld mantra of “no hugging, no learning”, and end the game as potty-mouthed homies. Secondly, there is no doubt that the game becomes repetitive. You are pretty much given all the superpowers anyone could ever want at the outset, meaning that the incentive to level up is significantly reduced. The ability to fly is all well and good but it negates the need to boost cars, which in turn means that you might miss the cracking in-game soundtrack, where EMF rub shoulders with The Bronx, and Robert Palmer segues into Macklemore. Further, as many reviewers have already highlighted, one cannot ignore the distinct similarity to the Xbox 360 classic Crackdown. The obsessive collection of glowing, chiming items which heighten your abilities is much too derivative to be called a knowing nod. Finally, this version of Steelport, though full of wacky characters and secret areas, is the very same as in the third game albeit in an upscaled, glowing skin. Yes, there is a narrative reason why the designers have maintained the location but at times the nagging sense of déjà vu grates.

Those criticisms aside, Saints Row IV is a whirligig of tongue-in-cheek satire, casual innuendo and gratuitous violence. Pop culture nerds will love the pile-up of references to sources as diverse as Mass Effect, Tron and The West Wing while casual gamers will enjoy the ability to turn on and jump in to a steroid-fuelled world where there are no consequences other than a slight tinge of guilt for enjoying such wanton immaturity. Ross Thompson