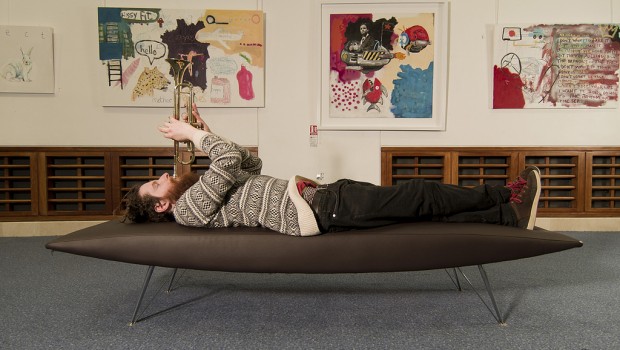 Stephen Millar: The Jazz of Shapes to Come 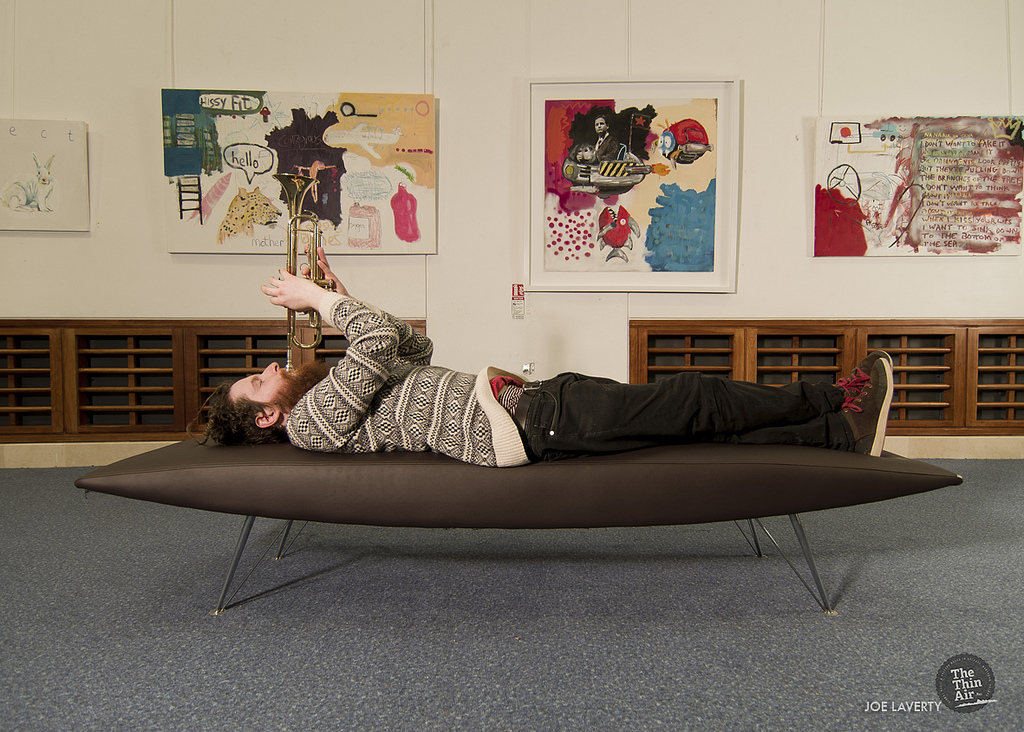 All but coinciding coinciding with this year’s Brilliant Corners jazz festival, Belfast-based visual artist Stephen Millar chose an opportune time to hold his latest exhibition, ‘The Jazz of Shapes To Come’, at Belfast’s Waterfront Hall. With its wonderfully-contorted nod to Ornette Coleman’s groundbreaking 1959 album, The Shape of Jazz to Come, the exhibition features twenty-six A-Z paintings, each based around a particular jazz piece. An ambitious project and no mistake – but one that very palpably paid off for the painter and illustrator.

With Joe Laverty having stopped by to take some photos of the artist and his exhibition, we spoke to Millar about the impetus and influences underlying his latest endeavour and what the the future holds in store.

Hi Stephen. First up, how did the idea for the project come about?

Hello. To be honest the idea for the project was kind of an accident. Last summer I was working on a piece and I realized I had listened to the same Ornette Coleman album for about ten days while painting. The painting had organically, unconsciously become a kind of response to the music. I then decided to challenge myself and try to create 26 pieces… A-Z. Each letter representing a musician or band. O (for Ornette) was already done just 25 more paintings to do.

Have you attempted something along the lines of this exhibition before?

In terms of scale, no. The Waterfront Hall is a large venue and I was quite intimidated at first. In terms of context – music has always been influential in my work but this is the first time I decided to make it the primary focus. 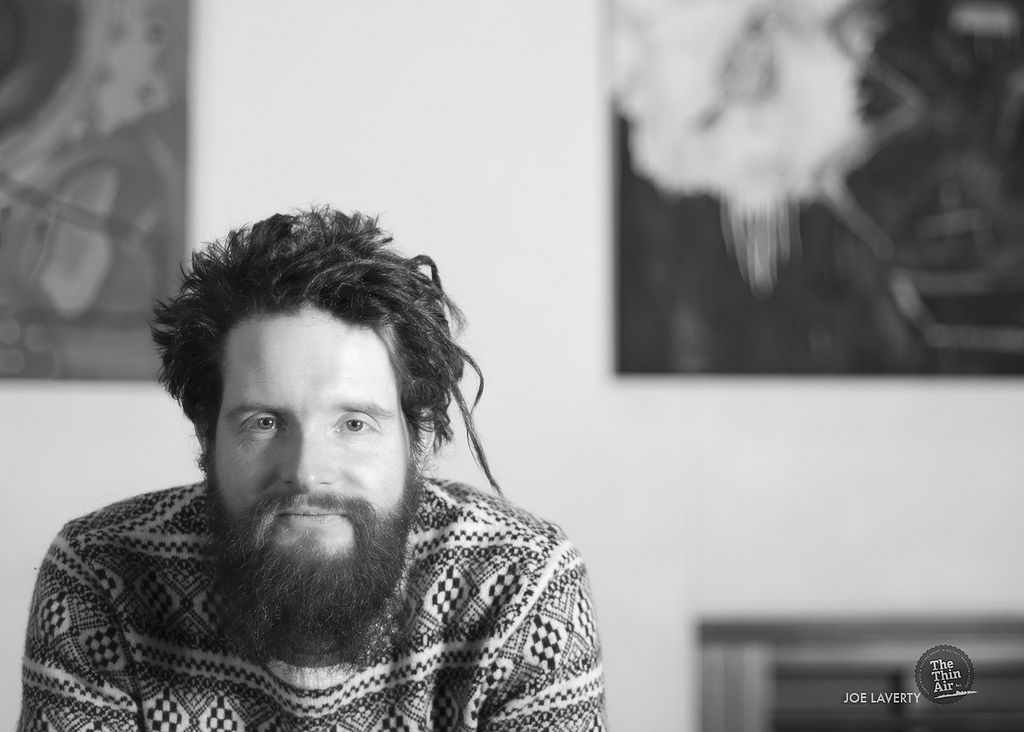 Did you set out with any particular result in mind, perhaps triggering interest in the music or certain songs via your abstractions?

I’m not sure if there was a particular result in mind. I enjoyed the challenge of it. I asked people for recommendations for musicians. I got to listen to a lot of new (to me) music. I think I could attempt to write an A-Z of musicians to create work to and come up with a different list each time. If there was any preconceived idea of a result, I think it was to allow the viewer to understand a little more about my creative process and if as a result of going to the exhibition people got introduced to some new music then even better.

One assumes you’ve a fairly strong appreciation of jazz in order to pursue this project. Is that the case?

Yeah definitely but it’s not my only love. I’m a musical tart. I’m also quite politically motivated in my work, so I included works by the likes of Grace Petrie and Billy Bragg. What started solely as a jazz project grew into a wider music project. 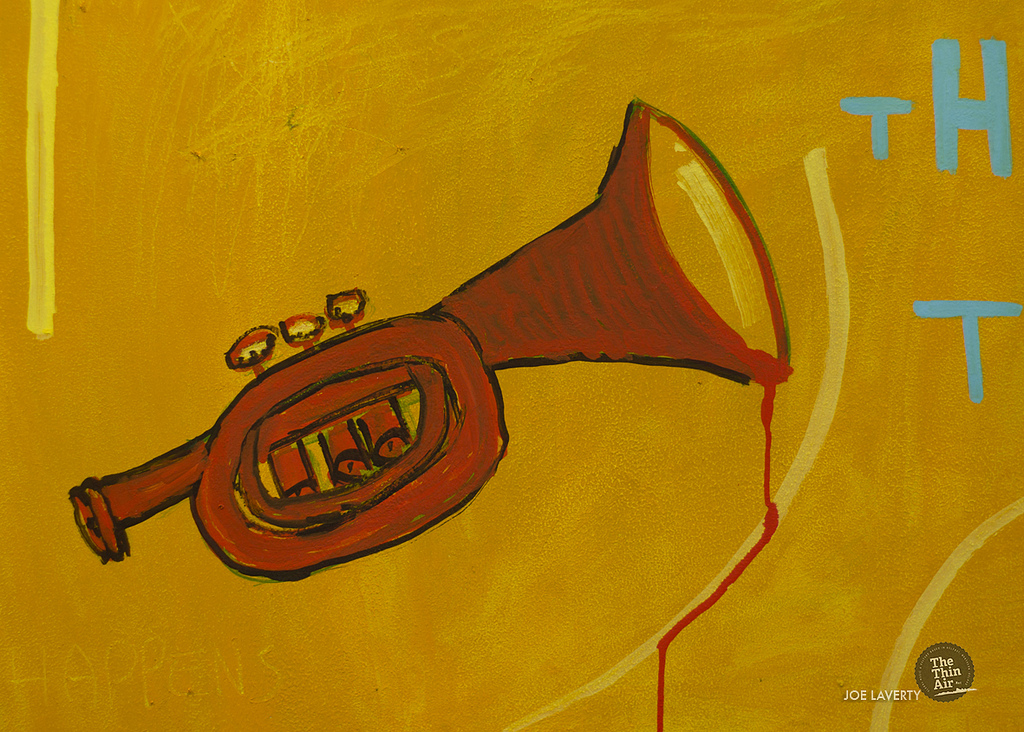 Did you listen to the songs whilst painting each piece? If so, how did you find that experience?

Yeah, I listened to each particular song on repeat until that painting was finished. It nearly put me off music haha. It was much easier with certain songs than others. It is said that we receive music with different sides of our brains, music with lyrics on the left (logic) and music without on the right (creativity). Now I’m not sure about that but I found it interesting that some of the pieces I created with most text in came from songs with no lyrics.

For one piece in particular I tried to challenge myself further still. I was working on a piece to ‘Little Sounds of Pain’ by Isobel Anderson (below), the song tells the story of Isobel’s experience of tinnitus. I listened to the song at differing volumes from extremely loud to barely audible. I wanted to try and gain an insight to the condition, the result was that I felt incredibly nauseous. Top tip: don’t dick about with the volume.

Jazz as its sub-genres and many variations – did you find yourself painting differently for say, an early bebop song compared to a full-out free jazz piece?

I think I reacted differently to each piece of music and in turn each painting had a different response. When I was painting a piece to John Coltrane’s version of ‘My Favourite Things’ I was transported to my childhood, I realized I would have to make this painting fun and less controlled. I ended up taping eight paint brushes together in a line to make really long paint brush so that I was now painting from the other side of the studio. The music was playful so my response had to be the same.
Music is capable of allowing the listener great highs or lows. I think I was trying to convey how they affected me in the work. I’m not too proud to say that I did have a bit of a dance in the studio while painting some of them 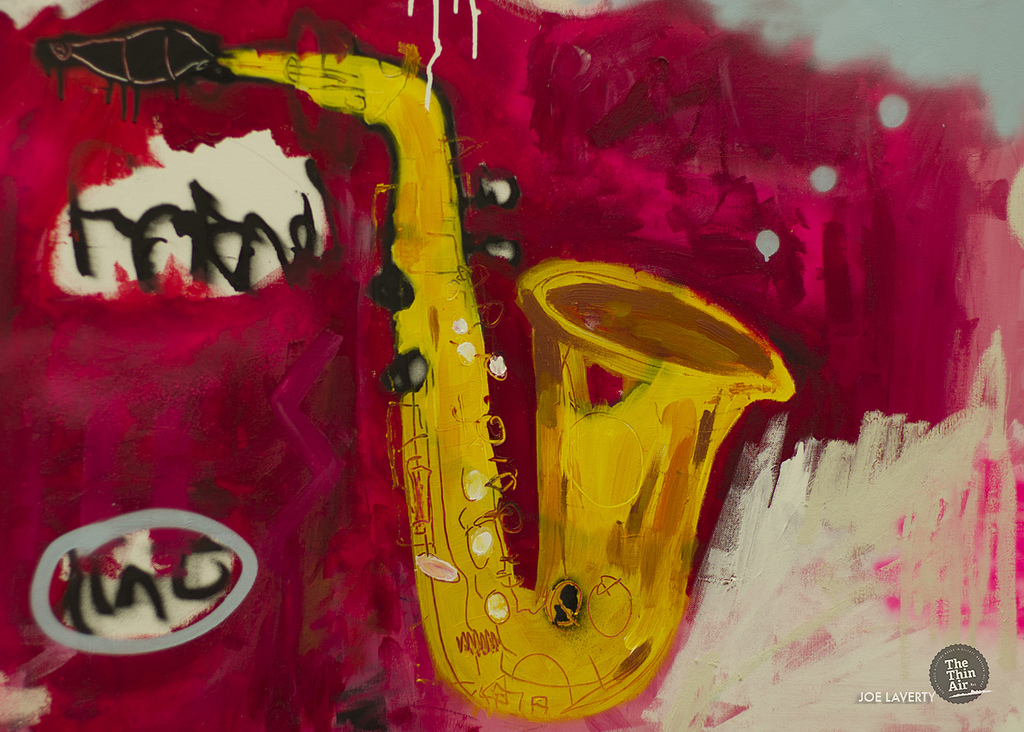 Of all the paintings in the exhibition, which do you feel distils the essence of the whole project most and why?

That’s a really interesting question as my favourite songs didn’t necessarily lead to my favourite paintings. I think if I’m pushed I would say the piece titled ’Logic’. This was created in response to ‘Epistrophy’ by Thelonius Monk. Wynton Marsalis describes Monk’s music as the most logical in jazz. I timed my brush strokes with his key strikes. It was difficult to keep up what with all that logic going on but I eventually got to a point where I felt I was playing along with him.

Finally, what are your plans for continuing along these lines in the near future?

Ideally I would love to take the show to other cities and let it tour. It would be great if other music venues were interested. I think that would suit the narrative. It has been a great experience to work like this I think it’s something that is now probably going to remain part of my practice.

The Jazz of Shapes to Come runs until Monday, March 31st at Gallery 2 in Belfast’s Waterfront Hall. Admission is free.

Check out all of Joe Laverty’s photos from the exhibition below.