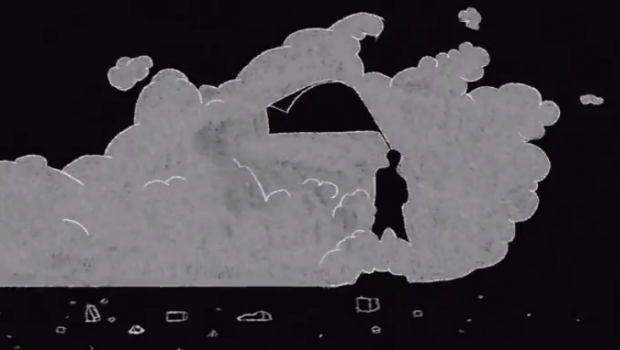 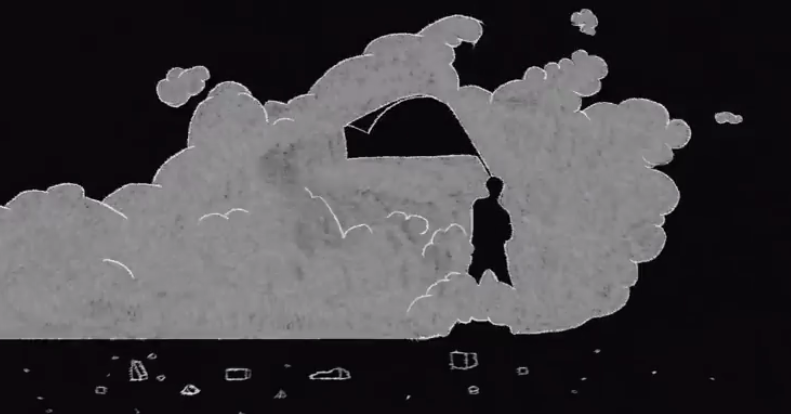 In the latest installment of Frame by Frame, Belfast-based filmmaker and photographer Colm Laverty talks to Dublin indie-rock duo We Cut Corners and creative duo Kijek and Adamski about the former’s recent, altogether spellbinding video for their single ‘Best Friend’, touching upon the creative process, the inspiration behind the animation, as well as music videos in general.

We Cut Corners headline our next No Tomorrow night at Voodoo Belfast on Saturday, May 3. Go here for the show’s Facebook event page.

We Cut Corners: We worked with Kijek/Adamski on an animation which accompanied a song from our first record. Prior to that we had been fans of their artistic versatility and innovation so in the case of both projects, we merely delivered the song into their uber-capable hands, and they did every iota of hard graft.

Kijek/Adamski: Roles for this one (as well as for any our work) are identical. We work arm in arm.

In a sentence, what sets ‘Best Friend’ apart from other Irish music videos?

We Cut Corners: I think it stands apart from any music video I’ve seen to date, Irish or otherwise. It’s an incredibly symbiotic, sympathetic visual foil to the song which trades very much on its dynamic and emotional range and this is deftly echoed in the video.

Kijek/Adamski: We have to be honest here – and it concerns few other answers – we don’t know much about Irish music scene and probably even less about Irish music videos. All in all we try not to consider any national affiliation worth isolated analysis. It’s all worldwide now and that’s the way we want to perceive it.

K/A: We found it in the lyrics. It’s a brilliant rendition of mental antinomy. We feel strong connection with this condition. It’s actually hardly expressible in a visual piece. We tried to refer to more recognizable imagery to communicate this state. Recent (and not so recent) events suited us well here.

WCC: Again, one for the directors, I imagine.

K/A: We studied hours of archival news footage and dissected the most common elements of street riots.

How well do you feel the ‘Best Friend’ video reflects the themes and concepts behind the track itself?

WCC: We outlined the themes of the song in the broadest of terms for the directors so they were drawing very much from their own interpretation of the lyrics. The song is something of a battle-cry against the grotesqueries of elitism, in its many forms and we think K/A tapped into the anger that drives the song.

K/A: We feel it serves it well, but it’s hard for us to have a distant point of view here.

Were any of the scenes portrayed in the video based on real-life experiences or events?

K/A: Sure. Not exactly our lives, but it happened though. We were inspired by most famous riots including those recent ones as well as famous historical events like L.A, 1992.

This isn’t your first collaboration – in what ways did the previous experience working on ‘Pirate’s Life’ shape the way you approached this video?

WCC: For us, we knew we had been utterly lucky to work with such high-end artists on the release of one of our first singles so, as soon as we had demoed ‘Best Friend’, we got in touch with the guys in the hope that they might like to collaborate again.
I think generally they would shy away from working with the same band multiple times but made an exception owing to how different the two songs in question were.

K/A: We tried to avoid walking the same path twice. So despite both videos are hand-drawn, we made it in a completely different manner both technical and artistic.

How do you feel the hand-drawn animation reflects the aesthetic of the band?

WCC: While we love working with all types of visual media, there is a timelessness about hand-drawn animation that really appeals to us. A sense of otherwordliness can be captured whether the work is emanating from a workshop in Belfast, Krakow or Montreal.

K/A: Not exclusively. Yet, we are not PR experts. We always analize the message and the values of individual tracks. Still – this comes from the band, so eventually it defines them in a way we think.

K/A: Only the two of us made the whole thing.

K/A: We were lucky both the band and the label seemed to trust us. Only the time factor could affect our choices.

K/A: We only obey the musical divisions. It’s the most logical way to approach it.

Has producing music videos affected the way you now perceive (your own) music?

WCC: For the most part we leave the videos in the hands of the directors that we admire and trust implicitly to create something which adds graphic depth to the sonic pictures that we’re trying to create. Certainly on this record we’ve tried to be more hands-on & shape the direction of some of the pieces but, more often than not, we’re happy to let the experts express themselves.

K/C: We have a designer approach for creating music videos, so for us it is always an answer for given issue. Yet, we wouldn’t go too far claiming it affects the way we perceive music. It is still mostly intuitive and emocional for us.

How do you feel music videos have changed over recent years?

WCC: Bar the obvious technological advances, the quintessence of a good video is the same – come up with a good idea and communicate it artfully.

K/C: Digital shift on democratized music video market. Since the technology became widely available, more people were able to create. Budgets quickly dropped down as it was proven that mv can be made basically with no funds. It stimulated the creativity. So there is no coming back to the 90’s but it doesn’t mean music video is in any worse position that it was back then.

WCC: It’s probably most palpable in how we consume videos and with the glut of material that appears on a daily basis, sadly some of the best stuff falls between the cracks.

K/C: We pretty much answered it above. Technology is now more advanced than ever but it’s also more diverse so we can expect really creative approaches to music video making. On the other hand eclecticism becomes very powerful concept.

WCC: There are so many good people working in Ireland right now, from Miles O’Reilly who works under the Arbutus Yarns moniker to Brendan Canty at Feel Good Lost and many others besides. It’s incredibly difficult to choose one, as they’re so inextricably welded to the songs they accompany, but we’re really big fans of the work of Aoife McArdle – her recent video for Jon Hopkin’s ‘Open Eye Signal’ is one of our favourites by an Irish director.

K/C: We don’t. It wouldn’t be fair to pick knowing so little about Irish local market.

WCC: Chris Cunningham’s ‘All is Full of Love’ video for Bjork is possibly the greatest marriage of sound and vision that we’ve seen and is yet to be surpassed by anything.

K/C: It is impossible to point at one work. We really enjoy videos from Gondry, Jonze, DANIELS and Megaforce, and even this list is far from being complete.