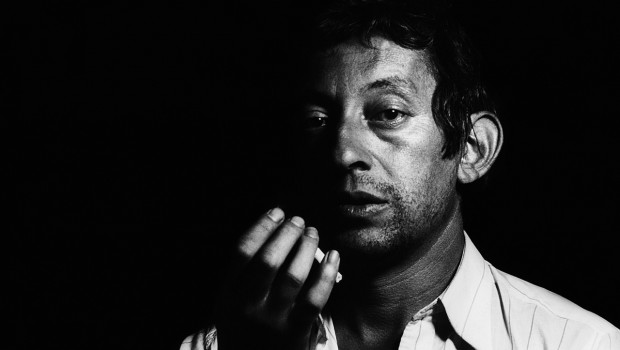 Slogan: Or how I learned to stop worrying and hate Serge Gainsbourg. 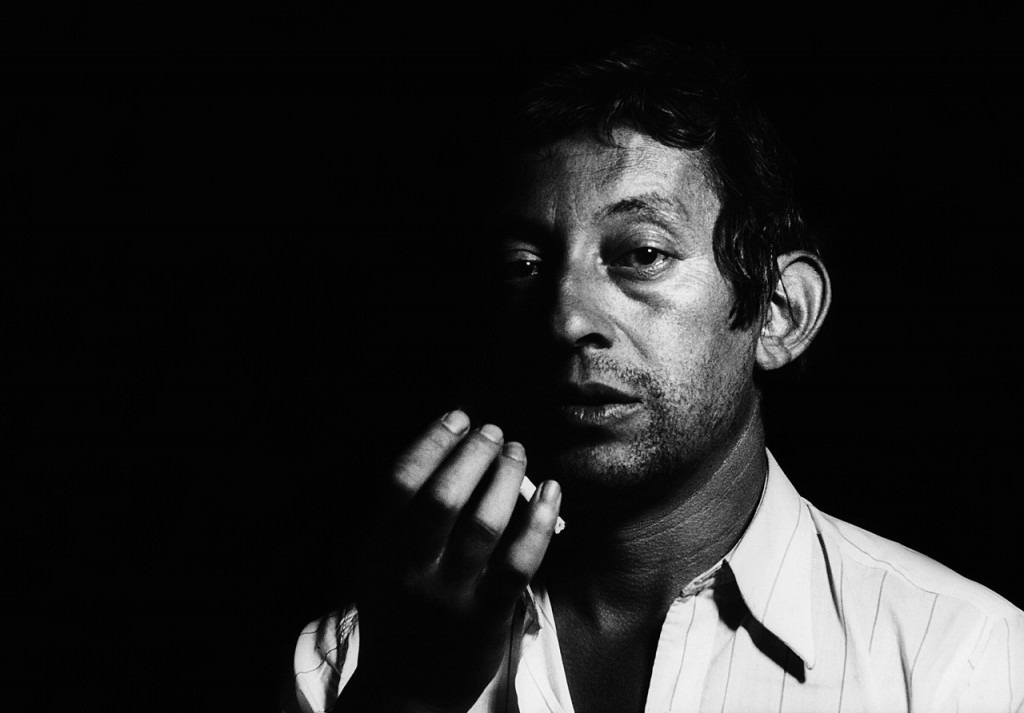 Francois Mitterrand, the French president at the time of Serge Gainsbourg’s death, called him, in a surprisingly emotional obituary, “our Baudelaire, our Apollinaire” with the sort of off-the-cuff erudition that’s made me a life-long Francophile. Our premier at the time was Margaret Thatcher, a woman who is to poetry what Baudelaire was to self effacing good humour and an early night.

That the President of France felt the need and, no doubt, a political compunction, to address a pop singers death is extraordinary: I wouldn’t hold your breath, Sir Cliff. But Serge Gainsbourg was much more to the French than a singer. He was part of the national character: glib, dishevelled, waving a gitane like a wand, seemingly fuelled only by mischief and irreverence (though actually fuelled by heroic quantities of booze) he was France’s court jester, the gadfly that nobody batted away; the splinter the skin grows over.

That was the Serge that I fell in love with. Look at him, with his frog face and his sheep’s ears, dressed in those immaculate sixties suits, squiring a succession of toothsome dolly-birds. He couldn’t sing, he couldn’t dance, and his stage-act was a few nervous shrugs and a tic, and yet he exuded a black and white, post-existential, pastis-pissed cool. Closer investigation of his records yielded a surprising truth: they were really, really good. Though too old for pop, he was a chansonnier and jazzer, he never seemed to despise it, looking at the various new forms of music pop threw up as problems to be solved, idioms to be reborn in his image. From his subversive ye ye records, his appropriation of African rhythms, the plundered prog, country, reggae and electro: he did it all. Melody Nelson, generally considered his masterpiece, remains astounding; half an hour of doom-laden elastic bass, a seventy piece choir and Serge so close to the mic that he appears to be trying to burrow into your head. And I suggest he would be a bad tenant.

With his cynicism, the perfect angle of the dangle of his perpetual gitane, his gallery of gamines and the distinct impression that he would be even less interested in football than I was, Serge was my hero. Then I saw the film Slogan and the scales fell from my eyes.

Slogan was a film Serge made with his friend Pierre Grimblat in 1968. It was also the film where he met Jane Birkin, his partner and muse for the next thirteen years. The plot, it doesn’t really have one but bear with me, sets up Serge as a passable impersonation of himself: he plays Serge Faberge (!) a successful forty year old advertising executive at the top of his game. Serge meets and seduces an outrageously coltish Jane Birkin. Her erstwhile boyfriend delivers this premonition of doom: “Things seem okay for now, but things can’t possibly turn out well.” This sort of ham-fisted portentousness exemplifies Pierre Grimblat’s film, which seems to fail on almost every level: technically it looks shoddy and the satirical parts flop badly, over-long and lead heavy. If you can’t take the piss out of the advertising industry, hang up your jester’s hat and pig’s bladder: it’s not for you.

Throughout the film Serge is rude to people in shops (he is on a seemingly endless search for walnuts), refuses to drive Jane anywhere, and picks her up and drops her as he sees fit. He is, it has to be said, immaculately dressed throughout, but that’s no real basis for a mature relationship.

The relentless misogyny wearies. I know it’s meant to be satirical but having a naked girl in a forest glade being whipped by burly men in kilts while she eulogises about the properties of a moisturiser named “Skin Scotch” just isn’t funny. Maybe it could have been funny, I’m not sure how, but in Grimblat’s boxing-gloved hands it falls flatter than one of Serge’s high notes. Hatred of women lies at the very heart of this film. “Did you hit her?” “Now and then.” “She needed it. And you?” “Not yet.” “You will.” This exchange is the turning point in a conversation between Serge and Jane’s stepfather. Prior to it the talk had been barbed, hostile, with Jane a part of it, arguing Serge’s case when the stepfather accuses him of looking ridiculous. The tone changes completely at this point, it becomes cosy, colluding, and there is an almost flirtatious intimacy between them. Meanwhile, Jane is excluded from the talk, presented literally behind the bars of the staircase at one point: a fluttering birdlike presence in a tarnished cage.

The models in the film are presented as interchangeable dollies who are summarily dismissed if they don’t submit to Serge’s every whim. Even his assistant (a slumming Julie Berto), the only woman in the film with an ounce of personality and autonomy, is unceremoniously “disappeared” for disagreeing with Serge: he is a cross between Austin Powers and Stalin.

Serge has that stock figure from French fiction; an understanding wife. She sits there with placid brown eyes ruffling his hair because he’s such a scamp. When, at a party, a distressed Jane rings to tell Serge she will kill herself if he doesn’t come to her, it transpires that she has known about the romance all along. “I have to go,” says Serge, “a girl is going to kill herself” “If they did so whenever they said, her generation would have died out” the wife replies. An odd thing to say in a film that had to be stopped for a fortnight after students blew up the directors Porsche, but the treatment of young people here, despite the gratuitous pop-art trappings, is about as sophisticated as the end of Carry on Camping, where Sid James and co are able to break up a hippie happening by tying all their beads together and spraying them with liquid fertiliser.

This is a deeply conservative film and Serge, in some ways, a deeply conservative figure. There is little of the sixties about him: he is the aging roué, the “funny” uncle with the tainted breath and a fast motor. He is forever watching the action and not of it; a most elusive leading man. When he finally dumps his wife and Birkin moves in with him in his pristine white flat she spends minutes leaping from cupboard to cupboard, planning their lives, working where everything will go, throwing shapes, moth-brown against the brilliant back-drop. He merely sits at the foot of the stairs, smirking in a tuxedo, his face half hidden behind the blue haze of a gitane. It’s every Bryan Ferry video you’ve ever seen. In the next scene he introduces her to everyone at a party as “my little home-breaker”. What a fucking charmer.

It doesn’t last and Jane clears the flat leaving the note “You are marvellous. I am marvellous”, despite scant evidence for this in the film. The film ends with Serge meeting another dolly-bird, twenty years his junior, another blank slate for him to scrawl over: “R.Mutt” on pristine porcelain.

But it’s just a film, you say. So what? It’s not as if it is real. It’s not a film: it is a curse. It is a self-fulfilling prophecy. All the events in the film exactly mirror Gainsbourg’s own life: it is a celluloid portrait of Dorian Gris. And Serge colludes in this: he tells his own story as himself. This leering satyr belittling women, pouting and stropping and never engaging, is his sorry idea of cool: this is how he wants to be seen. You never get a sense that he feels responsible for the terrible things he does to those around him; he’s just cool Serge surrounded by hysterical women and thwarted cuckolds. It was an attitude he took over into his real life. It’s a dissipated Serge Faberge sat on the sofa next to Whitney Houston, telling her he wants to fuck her. It’s Faberge again calling Catherine Ringer a whore on live television. Faberge eggs him on to burn a fifty franc note because poor old, extremely rich, Serge doesn’t want to pay his taxes. It’s the same ancient enfant terrible again and again, whittling away at his legacy, tainting his work with mal mots and idiocy.

So I’ll take the man’s work and I’ll leave the man and I think I’ll get the best of him. Besides, I hear that smoking is frightfully bad for your health. John Higgins