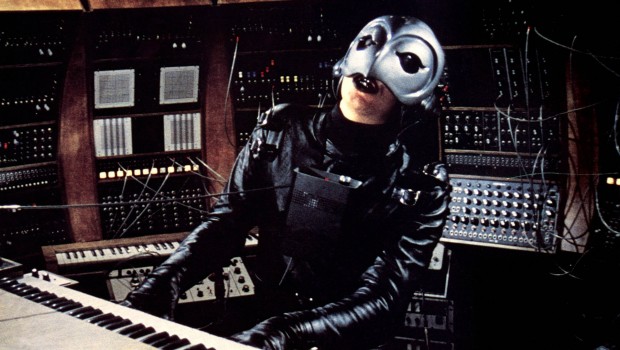 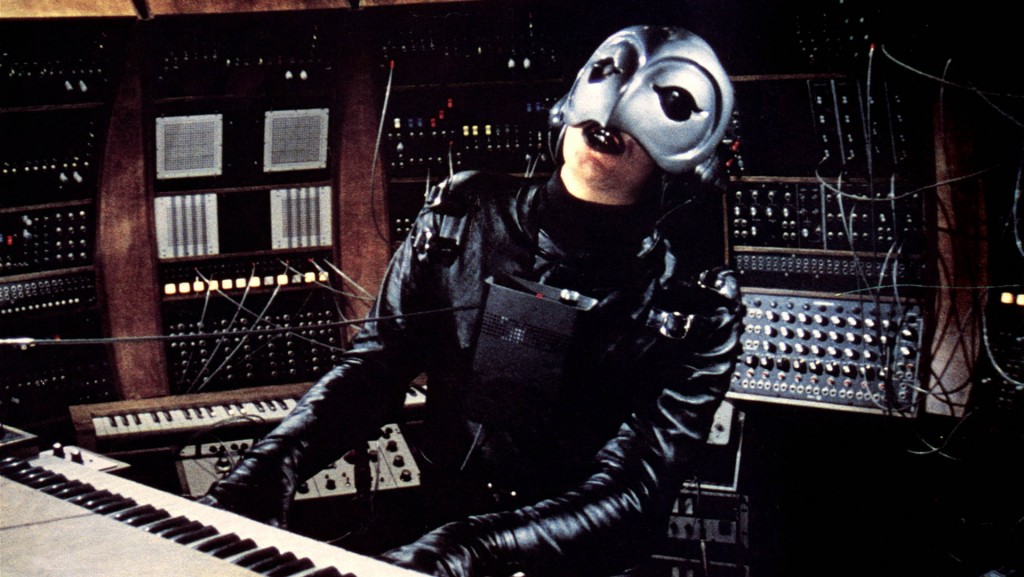 We open on a blood red, pixilated screen, so tightly rotoscoped that Ken Morse must have had to have a lie down afterwards. As the camera twists away we hear the urgent and distinctly imitable voice of Twilight Zone’s Rod Serling telling the tale of Swan (“he has no other name”), sonic savant and pop pioneer, the man who “brought the blues to Britain and Liverpool to America.” As the camera uncorks, a right handed thread, to a chorus of whining synthesizers, we find that Swan is looking to inaugurate his own Xanadu: “The Paradise – the ultimate rock palace”. We also see that the pixilated image is that of a dead bird, its tail salt stiff. This is the emblem of “Death Records”, Swan’s label. Now, I don’t know about you, but I would want to watch this film!

2014 marks the fortieth anniversary of Brian de Palma’s Grand Guignol, rock ‘n’ roll, horror musical, Phantom of the Paradise, a frothy cocktail of The Phantom of the Opera, The Picture of Dorian Gray and Faust, with perhaps a little dash of Poe’s ‘The Casque of Amontillado’ to taste. Paul Williams stars as Swan, equal parts Brian Jones and Peter Lorre, and he delivers an incredible soundtrack into the bargain, pastiching the entire history of rock music (which was less than twenty years old at the time) including doo-wop, surf, proto-metal, glam and sensitive singer songwriters.

Until 1973’s Sisters, his quirky, post-psychedelic homage to Hitchcock, (he even got Bernard Hermann in to do the soundtrack) de Palma had a reputation, if he had a reputation at all, for cinephile oddball comedies. After Phantom, he had a reputation for cinephile, graphically violent thrillers. Phantom is a dazzlingly peculiar mix of the two, an absurdist satire of rock and roll culture, peppered with songs, jokes, extravagant costumes, elaborate stage sets and a hell of a lot of glitter. I could bang on about this film forever but here, instead, are nine great things about this film:

… and the effective start of the film, is an ironic doo-wop detailing the exploits of pop singer Eddie who commits suicide, in order to get a number one hit and pay for his sister’s operation. The Juicy Fruits are feather combing, fag-behind-the-ear street toughs. They fight each other, they fight the audience, they pull switchblades or giant bras from their pockets, all in front of bearded and impassive 70’s session men doing Shadows style formation dancing. As lead singer Archie Hahn (Spinal Tap) pulls a knife on himself, committing suicide he goes into paroxysms. He is able to revive himself by wrapping the mic lead around his arm and, finding a vein, injecting himself with the microphone, making it to his feet for the concluding high note.

#2 There is a bird motif running all the way through the film.

The characters of Swan and Phoenix, of course, and Phoenix’ oddly horrific feather jacket. Then there’s the winter doorstep surprise of a curled up chaffinch that makes up the Death Records logo. The Phantom’s costume too makes him a black leather loplop, an emo emu. He actually dresses like a member of Battle of the Planet’s G-Force, albeit one who’s up for a bit of kinky fun on weekends. I’ve not seen a film so bird obsessed since Georges Franju’s Judex a decade earlier, which saw conjurer Channing Pollack continually producing startled doves from his person while dressed as a canary in white tie and tails.

Death Records is situated in a concrete and glass bunker made to Albert Speers’ specifications. The inside sees songwriter Winslow Leach (William Finley) spiraling through monochrome corridors like a needle in a groove, until he comes across the record company’s entire staff: a sullen hippy chick behind an enormous desk, empty but for a single red rose in a jar, its thorns prominently displayed against the white background. (Swan’s mansion is called Swanage, like the Dorset seaside town I once went to on an activities holiday. Swan’s Swanage has better amenities.) 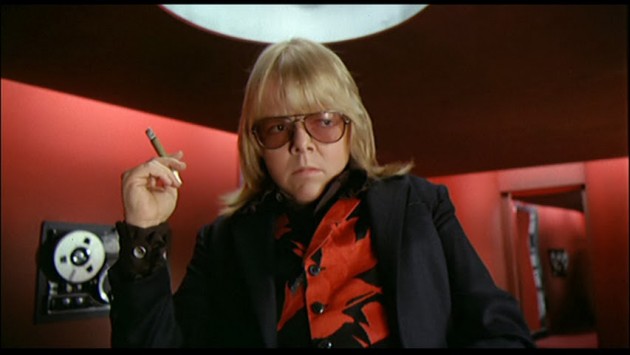 #4 The trials of Winslow Leach.

He wronged composer Winslow has a worse run of luck than an Eastenders character at Christmas. Evicted from the Death Records office by Hell’s Angels (Hell’s Angels appear as bouncers and heavies throughout. They respect Swan far more than they respect the Rolling Stones). He attempts to break into Swan’s mansion, is evicted, returns dressed as a woman, is evicted again, beaten and has drugs planted on him by the police at Swan’s bequest. He’s then sentenced to life at Sing Sing prison, has his head shaved and his teeth replaced with metal ones “to stave off infection”. Hearing that Swan has given his pop cantata ‘Faust’ to the Juicy Fruits he becomes enraged, attacks a guard and escapes prison in a cardboard box (!) Returning to Death Records he attempts to destroy all the Juicy Fruit albums but has an altercation with a record press which disfigures his already homely face. Surely, after all this, he must become The Phantom. (I should probably have mentioned that there are some spoilers here.)

In an extremely self-conscious nod to Orson Welles’ real-time-bomb-in-the-boot opening sequence from Touch of Evil, de Palma shows us two versions of the same performance of the song ‘Upholstery’ (the best Beach Boys song not by the Beach Boys you will ever hear) while bikini clad beach babes frug furiously on a wood-chip beach. We hear an ominous ticking as the Phantom’s avian face hoves into view and we understand that it is a countdown to inevitable destruction. Swan’s face is extraordinary as the explosion rips through the left half of the screen, reflected in his sunglasses on the right. He is composed, surprised, slightly hurt and, finally, accepting of the fact that the Phantom must be dealt with.

Phoenix looks like a cartoon puppy and sounds like Karen Carpenter (I contend that this is a good thing). She has a rich, deep, sonorous voice, perfect for Paul William’s piano ballads like ‘Old Souls’. Paul Williams wrote, “We’ve only just begun”, not for the Carpenters but for a bank advert, but the Carpenters had a hit with it anyway. He also wrote ‘Rainbow Connection’ for the Muppets, surely in contention for the greatest song ever written, certainly the best song performed by a frog with a banjo. 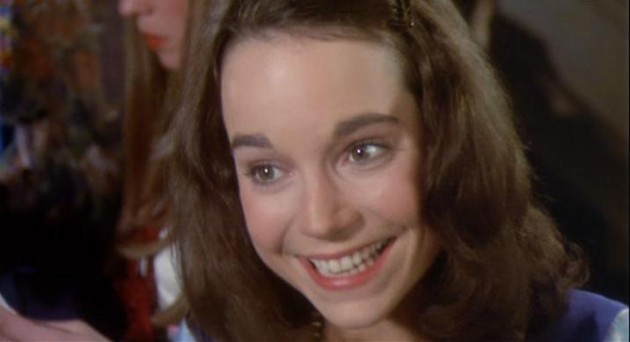 #7 The Phantom in the studio.

This was the first scene I ever saw of Phantom of the Paradise. I came in, drunk, from the pub and switched on the telly to find a man in a crash helmet and black lipstick howling like a Dalek who trod on a plug and playing the piano in a recording studio that is so seventies even the carpet is made of grass. Is it any wonder that this is Daft Punk’s favourite film (or that Paul Williams sang on their most recent album)? The studio was a real one and contained the Mini-moog named Tonto, beloved of fans of Tonto’s Exploding Head Band. Of course, there aren’t any.

Beef is the ultimate depiction of a rock star on film. He is perfect and fully formed, arriving at an open audition in a gold lame snakeskin suit, windmilling a tuneless power-chord and sniffing his own bicep, his hair a golden halo of bubble-permed curls. We next see him unveiled at an airport press conference. He emerges from a coffin wearing a diamante choker, his torso sprayed silver. As he turns to the camera he gives us a Gorgon sneer, hissing like a lawn sprinkler. Gerrit Graham is extraordinary as the preening narcissist, ably assisted by some of the finest rock clobber ever committed to celluloid, from the H.R. Giger python coiling round his thigh as he pratfalls through a rehearsal, unable to right himself from a tumble in his platform shoes, skidding about like a goat on ice, to the antler belt he wears. It’s a belt with antlers on it. Why don’t I own a belt with antlers on it? 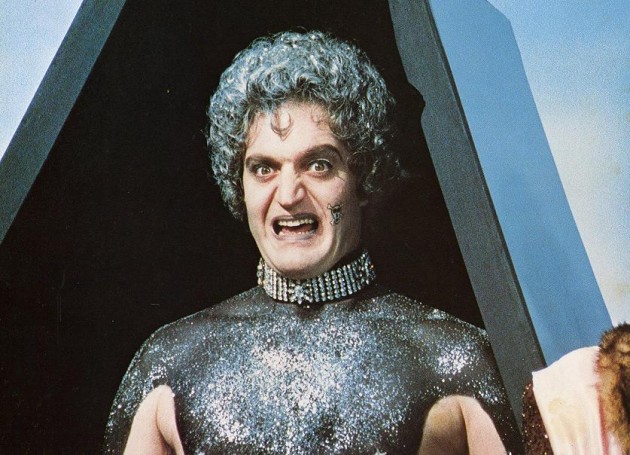 Backstage we see a different side to Beef, as he sits at vanity table, wearing rollers, surrounded by glossy black and whites of himself and muscle mags. He is nervy and wired, wading through a smorgasbord of chemical refreshments. After an altercation with the Phantom leaves him with a plunger stuck to his face (in a note perfect pastiche of Psycho) Beef makes a break for it (in a Santa Claus jacket and with a shamrock drawn on his cheek. As terrified as he is Beef is always stylish.). He is persuaded to stay despite these protestations: “The karma’s so thick round here you need an aqualung to breathe” and “I know drug real from real real!” His performance opens on a set entirely cribbed from “The Cabinet of Dr Caligari’, and beautifully realised too. His band, the Undead, harvest limbs and torsos from audience members with scythe like guitars, building Beef from it. He is a literal man of the people. He arrives, train-tracked with livid stitches, emerging stiff-legged and glittering from the coffin, to give us a bellowed ‘Life at last’ (voiced by Ray Kennedy, who wrote ‘Sail on Sailor’ for the Beach Boys). He soon limbers up, punching the air, dragging dummies out of the audience, strutting, doing a chicken dance, falling into the wings and emerging with a guitar he proceeds to play with his teeth. It is a consummate rock star performance and so much less embarrassing than a contemporary Mick Jagger one. At no time does Beef wear knee pads.

Films do not engage well with rock music. There is a perennial disconnection between the two art forms, pop’s darting ephemera next to the lumbering giant that is cinema – the weight of all those people striving to create art: the pressure of all that money, the Gordian knot of logistics strangling pop music’s vital spark. Phantom of the Paradise dodges this by presenting itself as a fully integrated musical, satirising the entire length of a peculiarly white rock and roll history. With the emergence of fifties nostalgia acts like like Sha Na Na (who were originally going to be in the film) and the 70’s concomitant descent into retro-decadence, you could say that this was the point at which rock began to eat itself. Phantom of the Paradise was perfectly positioned for that commentary and had a man of Swiftian acuity penning the eulogy. The music is perfect pastiche, a satirical symphony. It should have been a death knell to rockist culture and in a sense it was. Rock was spent. All it could come up with were tired facsimiles of itself, and endless permutations of degraded photocopies, failing toner bleaching into oblivion. Phantom of the Paradise is a snapshot of the moment that rock music became a greedy ouroboros. But with some lovely ballads chucked in for good measure. John Higgins