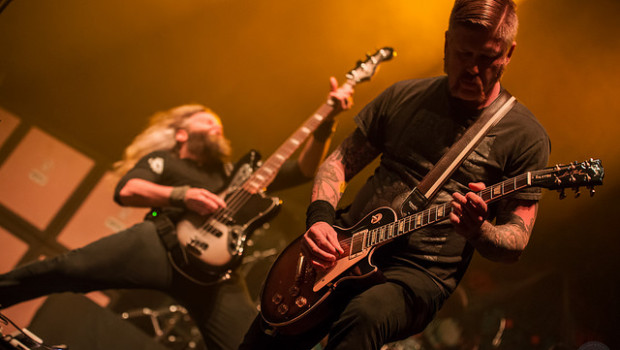 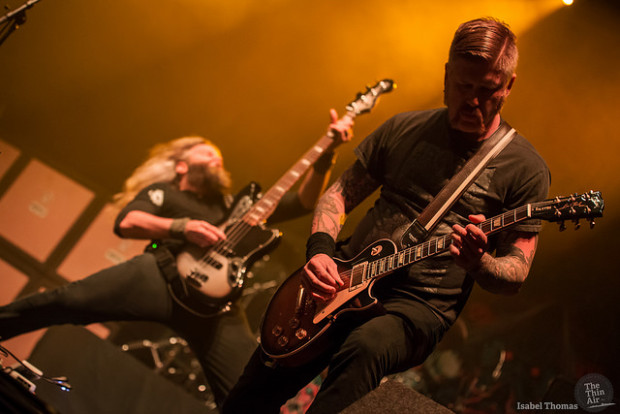 The night begins with a small clan of bemused faces. On the stage is Bad Breeding (frontman, Chris Dodd, below), throwing out fuzzy, mashed agro punk. Clever without being innovative it’s reminiscent of Black Flag, Crass and the noise-rock elements of bands like The Horrors. Not a bad thing, in and of itself, but elements of the crowd are as disinterested as the distortion is unrelenting. This simply seems to be a case of bad booking.

So the majority of the crowd hole up in The Olympia’s wonderfully anachronistic bar. The black t-shirts are adorned with tonight’s headliner and the myriad of past dates that the stateside band have caught in our little country. Mastodon have been coming here for years now and it’s given their most loyal fans an inside look at the rise and rise of this band from innovators to institution. It’s not a change that always goes well but looking at the young kids and the grizzled oldies it’s clear that the band inspire a loyalty that largely survives metamorphosis. 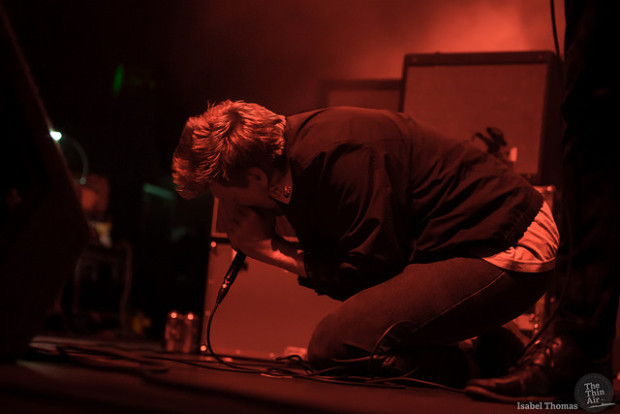 Or at least that’s half the answer. Because when the band take the stage it becomes clear that there’s several different clicks within the larger camp. Some go crazy for the retro rock singalongs of tracks like ‘The Motherload’. Others swoon over the proggy soup of a song like ‘The Czar’. While some are there for the face flushing fretwork, demented genius, and breakout work of ‘Bladecatcher’.

This is Mastodon; a Hydra, a Cerberus, a multi faced beast who in six studio albums have run the gauntlet of heavy metal, chasing and choosing sounds and effects that have brought them derision and praise. So here now we have a house divided. More appreciative than fawning, except for the wild youths just pleased with their own existence. Yet it’s a good set, trying hard to please everyone, at least for a moment. Troy’s whacked out, in the groove thing may veer from charming to creepy but his vocals are on point. And though many may miss the growl that headed up albums like Leviathan and Blood Mountain there’s a trained, precision to the singing that’s impressive, if less bombastic. The instrumentation is typically on point. This is a band of mega musicians, less hungry maybe then on their early work, but with an ability to make performance look effortless. This is especially true of Brann Dailor who, in a genre brimming with genius beat makers, still manages to stand out. 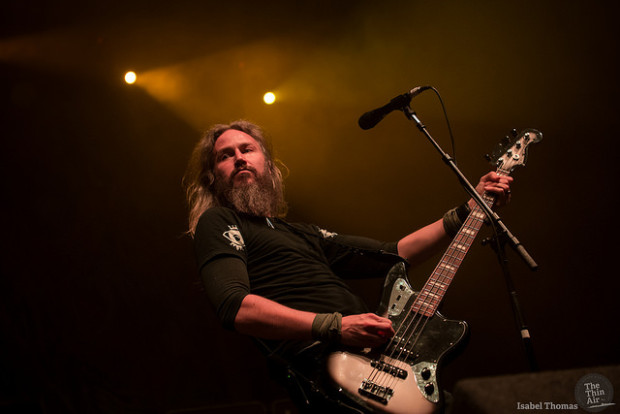 Arguably there’s a sense of lethargy on stage but the lads do their best not to succumb. There is an encore and of course it’s punctuated by that excellent rendition of ‘Emerald’. Mastodon have been doing this for a long time and they know how to please.

With great power comes great responsibility and with Mastodon’s growing fandom comes a mix bag of trials and triumphs. Yet they did well tonight, politicking the many sects in their own party. We’ll have to see what the next vacillation brings but for now they remain one of the city’s most loyal and loved heavy metal bands.  Eoghain Meakin 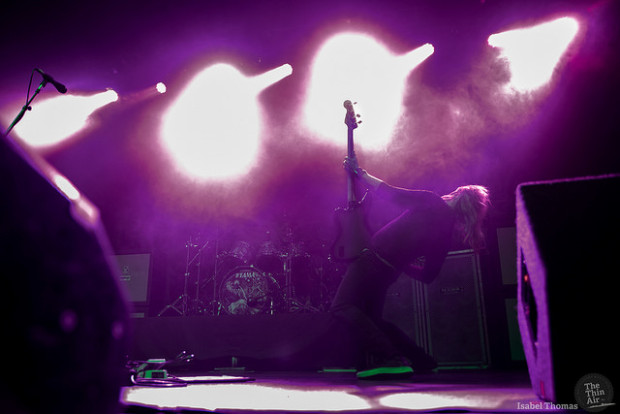