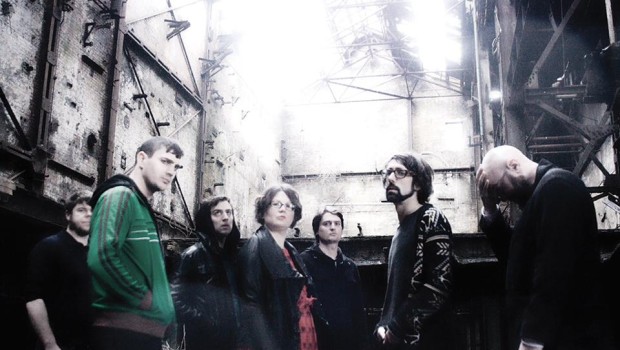 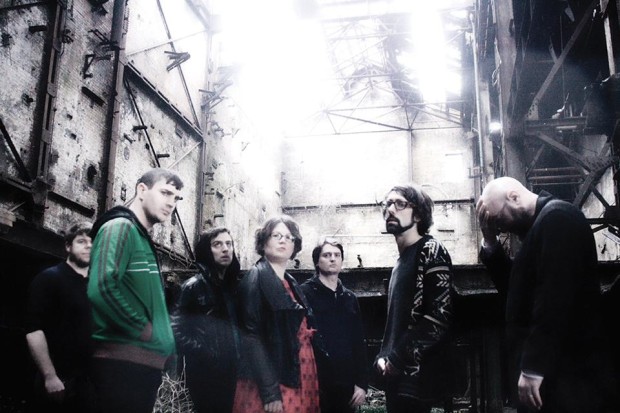 It was a long time in coming, but when it was announced that Dublin’s The Jimmy Cake were returning to the recording studio, the news was met with a huge sigh of relief amongst their fans. With their last record Spectre & Crown, having garnered a lot of critical acclaim on its release back in 2008, the forefathers of Ireland’s instrumental scene, must’ve surely felt more than just a smidgen of pressure when going into record what would end up becoming their fourth full-length, Master.

With Saturday night’s gig acting as Master’s official launch celebration, it was in no way surprising to find the queue of people meandered its way down and around Andrew’s Lane. The sense of expectancy, mixed with a slight hint of the unknown regarding the newer tracks, amongst the audience rose by the millisecond prior to the band taking to the stage. And although regular member Patrick Kelleher wasn’t available, the collective still amounted to the normal seven, as guest drummer Charles Hayward (This Heat/Camberwell Now/About Group) joined Paul G. Smyth (synths and keys), Thomas Parkes (trumpet, electronic percussion and synth), Lisa Carey (synth and clarinet), Vincent Dermody (guitar), Dip (bass) and John Dermody (drums),

The band kicked off proceedings with the rather aptly titled ‘Death Can Fuck Off’. A song of such efficacious magnitude it lead the audience down a path of pure and unadulterated cacophonous bewilderment, throughout its thirty minute plus duration. With layer upon layer of synthesizer notes, seemingly battling it out for supremacy against the cohesive yet pulverising drumming and chugging bass licks, the crowds’ attention never wavered. If anything they became even more engrossed the longer the final frontier-esque sounding track continued to gather momentum. The musical prowess that all  members of The Jimmy Cake – plus Hayward – possess is really quite astounding, and the way in which the final segment, as it were, of ‘Death Can Fuck Off’ was unleashed, was a thing of spellbinding beauty.

Next up was the rather bruising yet hypnotic ‘Observatory Destroyer’. Just like its predecessor, it was a number that contained a multitude of swirling synths, intertwined with ear walloping drumming, screeching guitar notes and entrancing bass lines. There was never a moment when it seemed as if any one of the seven on stage took even the slightest of a breather, particularly when it sounded as though they’d brought it down to such a lull, that it felt as if they’d been asked to turn it down due to the baby next door having been put to bed! Alas after the briefest of respites the noise levels steadily rose, like a marauding whale from the darkest depths, as the dual drumming, ear piercing synths, prominent trumpet and trance-inducing bass came crashing and trashing back to the fore as if their lives depended on it.

Just as is the case on Master the final track of the night was ‘Teen Mist’, which even though is the album’s shortest song, still clocked in at just over 15 minutes! The dissonance of the first two songs continued as the trumpet echoed the same eery vibe as the discordant driven guitar chords, while the upstroke playing of some of the bass notes accompanied the thunderous drum beats perfectly as some full on headbanging kicked off down the front.

‘Teen Mist’ is a track that is more obviously divided into two individual pieces, compared to ‘Death Can Fuck Off’ and ‘Observatory Destroyer’. Something which came strongly to the fore during not only its chant like vocal delivery and hand movements from Parkes, which was reminiscent of the heart removing scene in Indiana Jones & the Temple of Doom, but also throughout its latter stages, when it built up and up in such a bombastic way it sounded like a full on aural assault against most of our bodily senses!

Thank God The Jimmy Cake are back! Conor Callanan