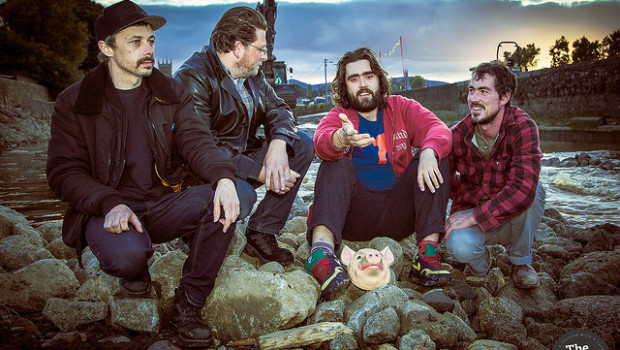 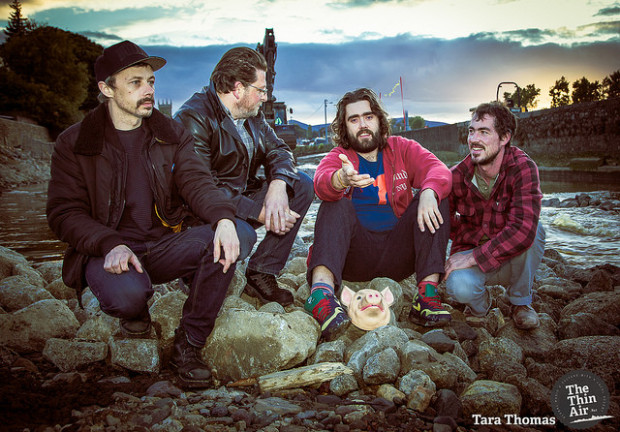 The story of The Cujo Family is a familiar one. Since their conception eight years ago they’ve amassed a serious, almost fervent fan base through their poetic song writing and knees-up live shows. Yet despite wide acclaim, full widespread attention remains elusive. Then life does its thing, and nips at your time with work, children, the day to day. And though music may remain the centre of your world, it’s one that has to be shaped around the very real needs of being a normal human.

Yet that doesn’t mean you should give up, because here they come again. With the approaching release of their third album Pigs in the Pen, The Cujo Family fire back up their engines. And with a launch show in the city, their first in some time, it seems the group are ready to re-stake their claim as an essential band playing the circuit today.

I caught up with the four members Reuben, Gav, Will and Hook and got their feelings on the industry right now and their own place in it. Eoghain Meakin

So let’s start with a brief history of the Cujos…

Gav: We’re going eight years now. When it first started it was a different line up and people called us a bluegrass band.

Reuben: It was never really a blue grass band, it was folky, yeah.

Will: It was the instruments that did that.

Will: I don’t think people really knew what bluegrass was.

Reuben: Then we moved on and it was seven of us at that stage. It was fast, more Pogues-y.

Gav: More wild. It was fun.

Reuben: It probably wasn’t the best presentation of art though. It was honest and raw so people related on that level.

Hook: it was a very successful time for us.

Gav: I think there was nearly a point where people were coming to gigs to see how messed up we were going to be.  We did go to New York.

Reuben: Yeah but we went to New York and got really drunk and probably didn’t play very good gigs. The same in London.

What point in the timeline is that?

Hook: We did an album with that line up and then the band was changed again. We stripped it back and Terry (Meakin) came in with the keys. That was the music we wanted to make, we stepped away from that more country-ish thing.

Reuben: It had more substance after that.

Gav: Even from the beginning this was all about songs. We could do our songs with synths. We try to write it so it’s strong melodically and lyrically. The instruments can change.

And I suppose that has been a challenge. You’ve even changed line-up since the conception of this album.

Hook: Well we made the album with the five of us but there’s four now.

Will: Every time we’ve made an album the line-up has changed so we have to reproduce it differently on stage.

Reuben: Every time someone’s left we’ve thought ‘we have to replace that person’ but it’s never worked. Because no one can replace anyone. So when we finished this album and Terry had to move on to other endeavours we didn’t panic.

Gav: Not to take anything from Terry, because I love his stuff on the album, but in a way it makes you better. Now as the four of us when we play live we have to give more.

Hook: It is the amalgamation of the four of us that makes it the Cujo Family.

Back then you were often labelled ‘hardfolk’. Is that something you still accept, and if so, what is it?

Reuben: No. We didn’t come together because we all listen to type-A music, and so everyone has their own influences. We grew up on different stuff so it’s all a manifestation of our different beings.

Hook: We definitely don’t go looking for a particular sound. We all bring our different thing to the table.

Do you like that it’s now the four of you?

So what kind of themes can people expect on the album?

Gav: It’s bleak. I think any album you make is like a film. I don’t write personal songs as such, more story driven. And the character could be a complete scumbag, but it’s not me.

Reuben: It is you, you’re a scumbag.

Hook: You’ve never written a song about a nice character.

Will: I don’t know what I’m writing about, I don’t sit down with a topic. I put phrases together, get visuals, what feels right and it seems to put itself together.

Gav: I think Will’s stuff is quite cryptic.

Will: It’s abstract. Everyone can think whatever they want. They baffle me as much as everyone else.

What was it like recording with Rian (Solar Bears, Leo Drezden) in The Meadow studio?

Hook: It was great, it was really, really good.

Reuben: It was in Wicklow, there were windows with green bits outside; it wasn’t a concrete box in the city centre. It was lovely working with the fellas; lovely place, great gear.

Did I hear you say it was mainly recorded live?

Hook: The majority of it was just the five of us in the room, and when you listen to it you can hear all the mistakes, you can hear the chairs creaking, the breaths in the microphone. We left it in on purpose.

Reuben: I don’t like that over meticulous production. It’s anti what I want to play music for sitting in a room making sure everything is perfect. 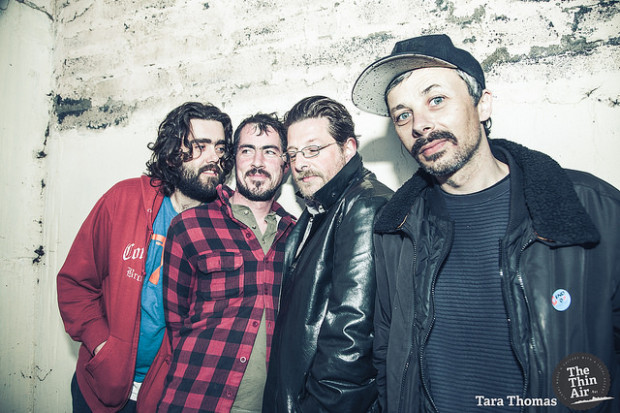 How long did it take to get this album done?

Reuben: It took six days to get the recording done, but that’s about a year ago in two blocks. We had no money so getting a mix was a money issue, like we didn’t have any.

Gav: I think if we had more money to make music we’d probably be on our fifth or sixth album.

You haven’t played in Dublin for a few years.

Reuben: It’s hard to get in to Dublin. Getting money out of people is an issue for us. We all have kids, we have jobs, the world keeps turning and when you’re young that’s grand but we’re in our thirties.

Gav: You can also get saturation in Dublin which I think happened when we were playing out there a lot.

Reuben: It’s a double edged sword. Dublin is the epicentre for booking gigs in Ireland but people don’t pay you for those gigs because there’s loads of deadly bands that will play it for free. But you don’t want to sell yourself short, you don’t want to set up a precedent where you play for little to no money, but in order to get gigs that pay you have to play. It’s just not always viable.

You’re synonymous with your hometown Bray (Co. Wicklow). How do you feel about that?

Gav: The following we have, anytime people come to a show they go totally mental and it’s great.

Reuben: You know Bray gets a bad rap but it’s a beaut of a town. There’s some places where you don’t want to be hanging out but it’s a vibing place. There’s great people in Bray, they’re fucking head-bangers but they’re great.

The other side is the press. Is that a part of being a band you can get behind?

Reuben: I don’t like organising it. I wish someone else who wasn’t a lunatic or a cocaine addict or something would do it and then that would be grand. I like to go chatting with people but you have to do loads of this shit and I just don’t have the capacity or the where-with-all to do it.

Gav: It’s a pain in the arse that this is what you have to do, but every band you hear about don’t land on your doorstep without something behind them. Whether you like it or not lots of cool stuff is marketed.

Hook: I feel that we’re on our third album and we have a large fan base and I just feel we don’t get the attention we deserve because we don’t do all these things.

Reuben: I think that’s just the way it goes, that’s the breaks. I understand what Hook’s saying; I feel we’re a band and if someone else would do that stuff it’d be great but its eight years now and if we’re making music we can stand over and we’ve still got our integrity intact, then it’s good and we can and enjoy it. Hopefully we can get paid, who knows.

So what’s the story with the album launch?

Reuben: More details to come. It’s going to be a monster night, it’s us and a support band and a DJ playing us up to about 1. It’s a party and we’re going for the downstairs in the Tivoli. It’s got a big sweaty box for people to get crazy in and a great sound system.

Hook: We wanted to do it somewhere unusual. Not just Whelan’s or the Button Factory.

Will: Tivoli’s kind of got a classic feel. 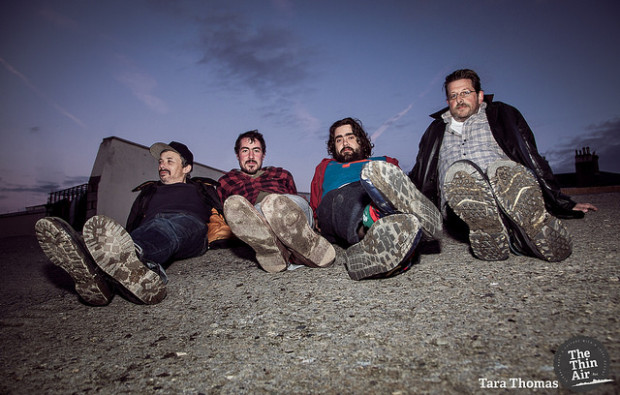 And where else will people be able to get the album?

Reuben: It’ll be available on bandcamp and, because we are poor salesman, we’ve decide to do a minimum run of vinyl and a minimum run of CDs. Hedge our bets and see how we go. It’ll all be cheap and cheerful.

Ok, last question. You’ve eluded to how hard this whole band thing is; how thankless, financially reckless, time consuming and energy sapping. So why do it?

Reuben: Because that’s life, it’s like having a kid. You just have to slog it out; you do it, you love it.

Will: You love it, that’s it. You’re not worrying about money, it’s just there.

Hook: We practice on a Wednesday every week, and for me, getting in a room with these three guys is the highlight of the week. Just playing music and no other shit.

Reuben: There’s numerous milestones, when you release that album that you really love or when you play a gig and the energy, the sweat is dripping off the walls and it’s just clandestine. It’s perfect, it’s a peak experience.

Gav: It’s important, it enriches your own life and if it helps other people, I mean, that’s important.

The Cujo Family’s album launch for Pigs in the Pen is this month, October 23rd, downstairs in the Tivoli Theatre. For more info check out their Facebook.