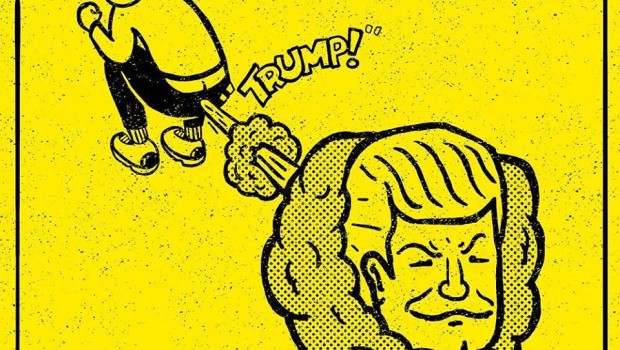 How Satire Explains The Rise of Trump 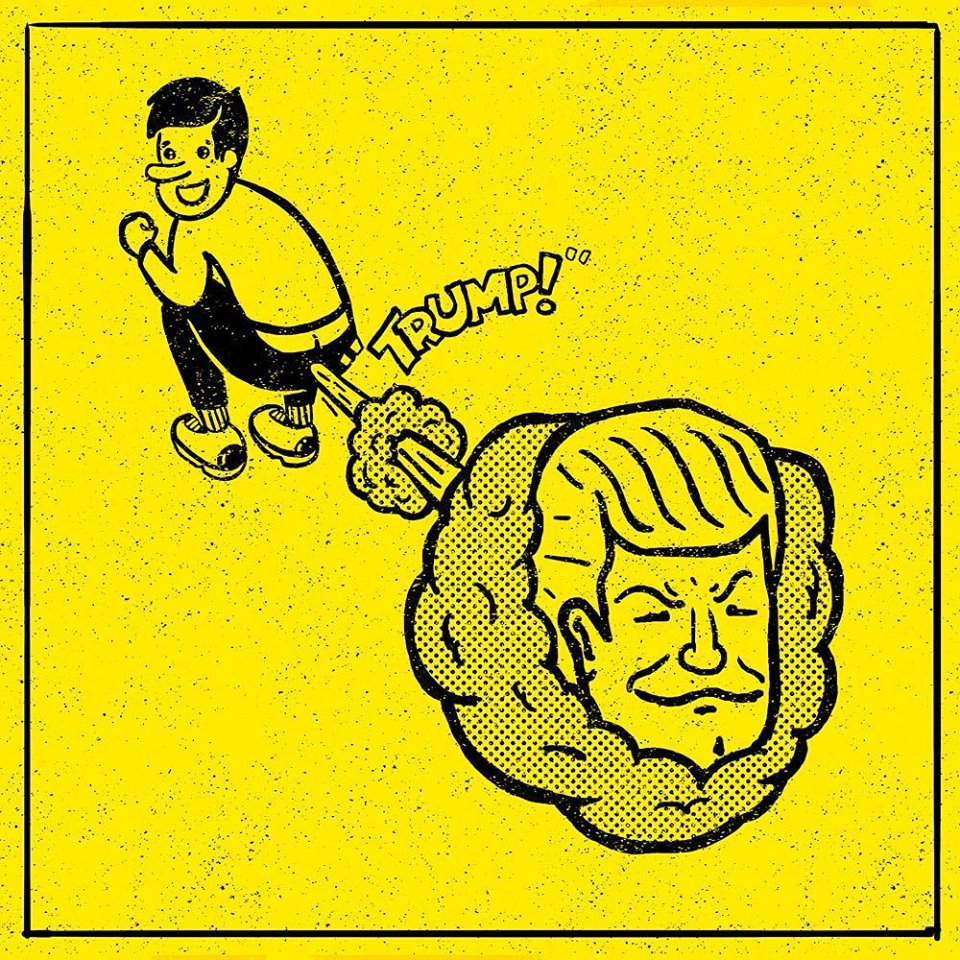 “Let’s Drop The Big One And See What Happens”

On November 8th 2016, the United States of America will elect a new president, and at the moment, in the eyes of many commentators, it’s a three horse race as to who that individual will be. On one side, the liberalism of Bernie Sanders is vying for prominence with the pragmatism of Hillary Clinton, and on the other side stands the man no-one would have expected, the irascible Donald Trump. The eyes of the world will be upon the US, and it’s difficult not to feel history is being made, for better or for worse.

From our perspective on the other side of the Atlantic, the seemingly unstoppable rise of Donald Trump can frequently seem baffling. After all, the man is – amongst other things – a reality TV star, prone to shooting his mouth off on whatever subject seems to be the order of the day, with a serious deficit of compassion. And, perhaps more damningly, he’s a Republican, ‘The Bad Guys’ in most narratives.

On the other hand, Bernie Sanders is an idealist, whose unshakable moral compass casts him as a true humanitarian, whilst Hillary Clinton is someone who has the smarts and clout to make hard decisions. The Democrats are nominally ‘The Good Guys’, and Sanders and Clinton represent two different sides to modern liberalism.

But none of this explains how Trump has managed to capture such a significant swell of popular opinion, particularly when our news headlines scream warnings of a man who proposes punishment for abortions, and who plans to literally build a wall around the country to prevent immigrants getting into a nation founded by immigrants. For a lot of people in the UK and Ireland, Trump has all the makings of a despot or a tyrant, and he looks dangerously close to securing real power.

Back in 1972, Randy Newman was a razor sharp satirist whose songs are shot through with a jet black humour that finds him laughing from the sidelines as he skewers his unwitting targets. Sail Away is an album that starts with a song selling the virtues and riches of America to a potential African slave, and ends with Newman taking up the voice of God, declaring, “Man means nothing, he means less to me, than the lowliest cactus flower, or the humblest Yucca tree.”

At the start of side two lies ‘Political Science’, a song that was cutting then, but seems prescient now. With a bemused incredulity, our narrator laments America’s position in the world. “No-one likes us, I don’t know why, we may not be perfect, but heaven knows we try.” As his home tumbles from the Greatest Nation on Earth, to the whipping boy of the world, our narrator is puzzled by how this could have happened, and comes to the only logical, sane solution: nuke the rest of the world to put America back on top.

The song is genuinely funny, but reflects the slide of America’s self-belief since the 60s. The shiny chrome of the Eisenhower-era prosperity had become tainted by the murky rust of the Nixon administration, and by the time of the record’s release, the country was still caught up in a devastating war with Vietnam, the president was lying to his people, and racial tensions remained unresolved. For Newman’s character, all that was once Great about this great nation had been tarnished, and drastic measures would be required to repair the damage.

The song uses one of Newman’s greatest techniques, a plain-spoken clarity that leaves little to interpretation. Newman isn’t passing judgement on our narrator, he’s simply capturing what they think. And crucially, whilst they think they’re right, Newman doesn’t tell us otherwise.

The simple language masques the deeper truth. Recently, I met with the Pulitzer Prize winning poet Paul Muldoon. Whilst praising the simple, direct language of Armagh writer John O’Connor, he told me, “Any fool can be difficult.” Randy Newman’s language forces us to embrace the perspective of the narrator. Regardless of our own take on the situation, this character doesn’t feel that he’s done anything wrong, but the most important thing in his life – America – is being punished by the rest of the world. When he says, “They all hate us anyhow, so let’s drop the big one now,” it’s not quite out of spite or hatefulness, qualities he perceives in former allies. For our narrator, the ultimate domination of everyone else is simply the only rational choice.

For many American voters, Donald Trump embodies this idea in a particularly appealing fashion. Much of Trump’s rhetoric is aimed at America’s enemies – real or imagined – and as we all know from his appearances on The Apprentice, his speciality is Tough Talking. With his slogan to “Make America Great Again”, Trump has captured the imagination of a wealth of disaffected Americans who don’t quite know how they became the bad guy.

With the American dream having been eroded from within and without, Trump’s supporters see a reflection of themselves in this man who doesn’t speak using a pre-written speech. He speaks his mind, he can’t be bought, and he knows who the enemy is. Regardless of the more complex truth of the matter, Trump has recast America’s role in the global political arena as an “Us or Them” situation. For the disenfranchised population who have had to sit back and watch as Democrats like Barack Obama have attempted to tinker with constitutional rights, whilst letting America’s self-confidence fall into the gutter, the no-nonsense Trump is the only one who has the sense to “drop the big one” on all those who would try and kick America when she’s down.

But who are those enemies? Trump’s wall will keep out the Mexicans, and he’s prepared to kick ISIS’ butt, but there are people queueing up to steal America’s global crown. Hard decisions are going to have to be made, and someone’s got to pay the price.

A firebrand and provocateur, Warren Zevon was one of the hottest songwriters in the world at the tail end of the seventies. His classic album Excitable Boy offered killer character studies, belly laughs, and a bullish self-importance that established him as a singer songwriter who could kick against the pricks, as the idealism of the Age of Aquarius spiralled down the toilet bowl.

Geo-politics form the back-drop for many of his finest songs, none more overt than the title track from his 1982 album, The Envoy. A sharp suited, Government sanctioned action hero, the song’s central character is the guy you call on when the world has gone to shit. With the knives drawn, you need someone who isn’t afraid to fight dirty, and that person is The Envoy.

Zevon paints a picture of global chaos. “Nuclear arms in the Middle East, Israel is attacking the Iraqis, the Syrians are mad at the Lebanese, and Baghdad does whatever she please.” And when world peace is threatened, and the chips are down, the only person the president can count on is The Envoy, the lethal weapon in a three-piece suit.

Zevon’s politicking is gung-ho, but captures the entrenched paranoia of a world kept hidden from the average American. All these guys are out to get you, strings are being pulled, but sometimes a good guy has to do bad things to set the record straight. Much like Randy Newman, Zevon rarely offers any kind of judgement on his psychopaths, preferring to revel in the grubby mire of a world gone wrong. His voice is declaratory, and Zevon perfectly captures that part that lies within all of us who just wants to do what has to be done, and damn the consequences.

Zevon’s character embodies a global perspective that is unshakeable; we are the good guys, so no matter what our enemies force us to do, it’s always in the name of the just. And if that gives us a bit of an ego boost at the same time, then so be it.

For those Americans who look at the lengthening list of enemies, and wonder what has to be done, Trump is The Envoy. He never backs down, even when he’s wrong. He’s out to win, no matter what the cost. And even if some people get trampled along the way, everything he’s doing is done to preserve your way of life. You can sit safe at home, surrounded by flatscreen TVs, iPads, and junk food, whilst Trump is out there winning wars on your behalf. As Bill Hicks was fond of shouting, “GO BACK TO BED, AMERICA, YOUR GOVERNMENT IS IN CONTROL.”

Sanders’ idealism is just that; a whimsical notion that will crumble against the hard rocks of politics. Clinton is a pragmatist, but that’s just another word for ‘defeatist’. Trump is a winner, and if there’s one thing America likes, it’s a winner.

Despite being written decades ago, the songs of Warren Zevon and Randy Newman go a long way to explaining how things have got to where they are now. It’s easy to sneer. It’s easy to carp at what is frequently called a triumph of stupidity, but Donald Trump has tapped into a potent vein of how America perceives itself, and many Americans who feel that they don’t have a voice are turning to this man who can shout the loudest.

And as the presidential race begins to enter the final stages, and we learn who will be going head to head for what was once called ‘The Most Important Job in the World’, it doesn’t seem quite so difficult to see how a man who seemingly makes no sense at all is the best option for a lot of people.

If true wisdom comes from understanding the thing you fear most, never before have the songs of Warren Zevon and Randy Newman mattered more. Steven Rainey