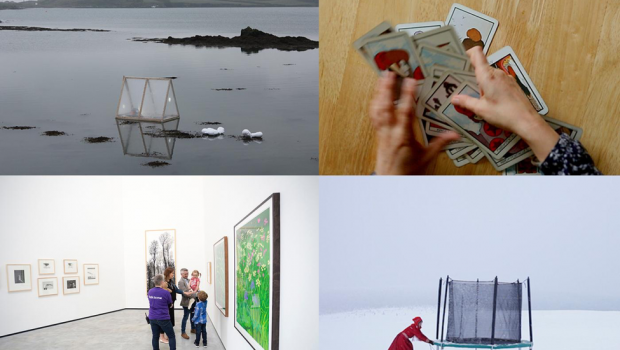 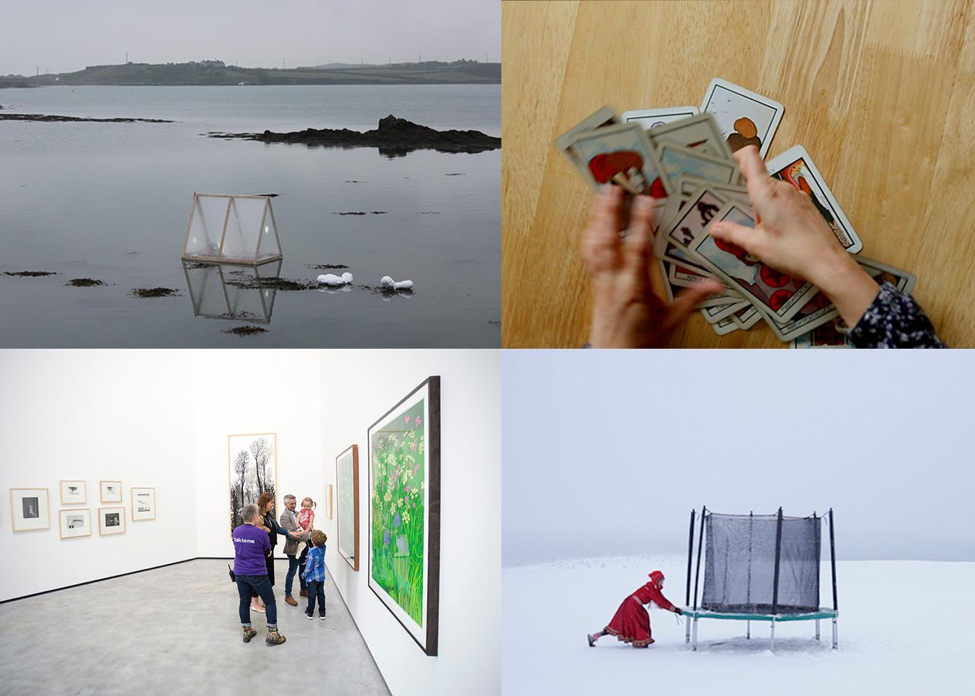 Collections come in many sizes, outputs and forms. They can be collated by the similarity in object or output, they can also be defined by a universal signifier such as a time, artist or theme. In this edition of The Thin Air’s Picture This we see this idea manifested in four of its many tropes. In Wexford we see a collection of national and international artists explore the idea of a residency and it’s impact on an artist’s practice. Galway also presents us a collection of artists, this time all of the Finnish and all of them discussing the same idea through various mediums – the concept of female identity both at home and abroad. In Cork a diverse collection of 17 artists come together to celebrate the completion of their degree show. Finally in Belfast we see a collection of a single artist’s work, as on show is a major presentation of David Hockney’s creations.

As well as collections in the sense of artist and bodies of work coming together, we also see collected ideas and ideologies that are universal to all shows. Rural environments are present within Wexford’s show, which is the result of a residency on a farm. While the students in Cork are the result of a four year degree programme that took place on remote island of Cork. While in Galway environment in both the natural and social situation form core motifs. We see the complementary of old and new approaches in all shows, most noticeably in Belfast as David Hockney’s earlier drawings contrast his new modern iPad drawings. All four shows display artists and practices that are unique but cohesive through their attention to details and passionate approach, so be sure to check them out before they’re gone!

Wexford: “This exhibition is carefully knitted together by RGKSKSRG to echo the closeness the artists experienced and interwoven journey they took on their residency in Cow House Studios.” 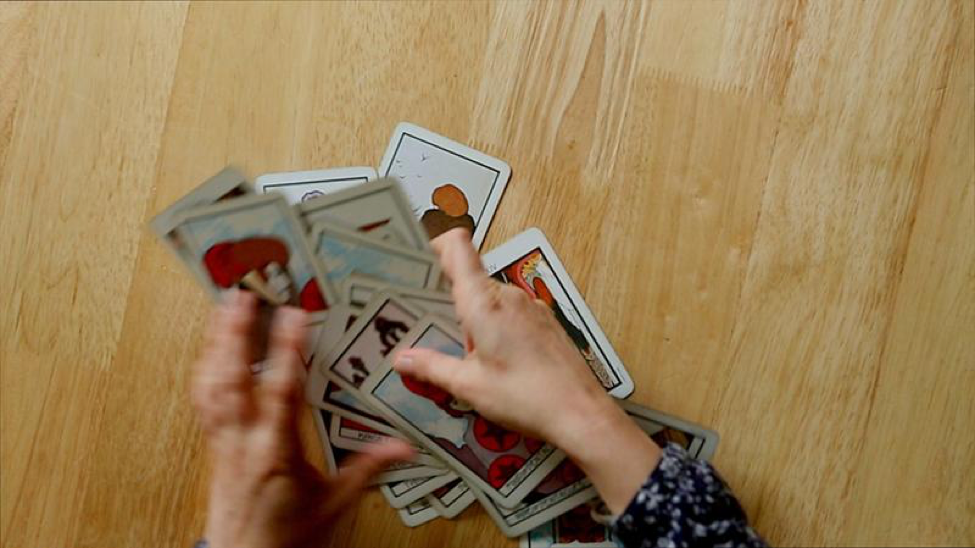 What: I like to eat with my hands
Where: Wexford Arts Centre
When: 29th August to 5th October

Wexford, the model county, provided the setting last Autumn for dancer and choreographer Claire Huber, artists Taro Furukata and Ann Maria Healy, and writer/artist duo KVM (Korean artists Ju Hyun Lee and Ludovic Burel) to undertake an eight-week residency. Relocating to Cow House Studios, the five artists shared accommodation, as well as skills, on a working farm near the Blackstairs Mountains. The result of this endeavour is the exhibition I like to eat with my hands, which is currently on show in the Wexford Arts Centre and curated by Rachael Gilbourne and Kate Strain aka RGKSKSRG.

The show, and residency, deal with the question of whether such a radical relocation for these, or any artist for that matter, has a notable effect on their practice and if so how significant will that impact be. This question is proposed in the accompanying literature for the show with reference to the 1979 novel Pig Earth by John Berger – familiar to many, especially visual arts students irrespective of their medium, through his Ways of Seeing TV series and later book of the same title. The answer to this question is presented in multiple forms through the varied disciplines of the artists chosen to explore its narrative. In Furukata’s work we see the artist balance the attempts to assimilate within a foreign, but recognisable, environment as he deals with emotions such as homesickness. This is wonderfully illustrated through lamps constructed out of bags from Asian food markets and transcripts of his calls to his Grandmother to seek traditional Japanese recipes. Huber dances her way through and with nature in an attempt to escape physical and mental confines. In the gallery a large tree from the Blackstairs mountain is presented, mimicking the transfer of artist, roots and all, during the residency undertaken. KVM present a series of images garnered from the internet that look at the notion of horizontal. We see drunks passed out on the ground, sleeping pods, sexual acts and commuters asleep. The environment and action resulting in the same human reaction, the same base human reaction. Healy’s work sees a television display a game of tarot cards downstairs in the gallery, while upstairs we see surreal and sensory provoking sculptures and video pieces.

This exhibition is carefully knitted together by RGKSKSRG to echo the closeness the artists experienced and interwoven journey they took on their residency in Cow House Studios. The cohesion together is naturally jarred due to the contrasting output delivered from said residency, but this only enhances this already intriguing and alluring show. The basis of this journey was a question and one, in essence, that does not need to be answered. Closing at the start of October don’t forget to catch this exhibition, experience that journey and propose your own internal questions. 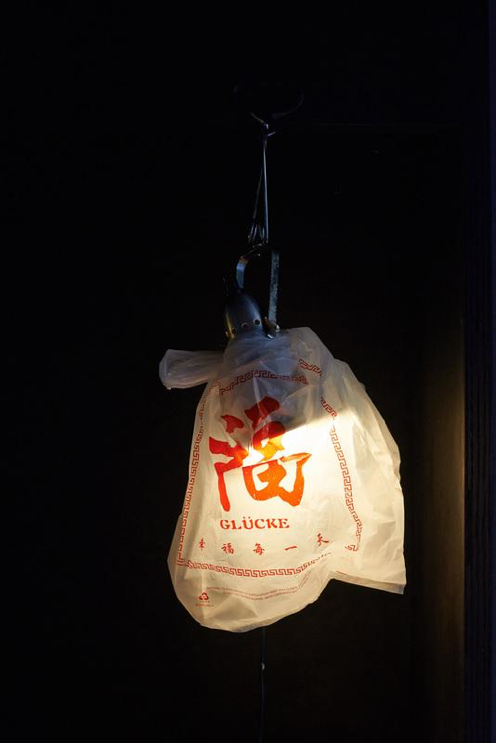 Galway: “Through their work these five artists highlight the similarities and common social attributes between Ireland and her European Union ally.” 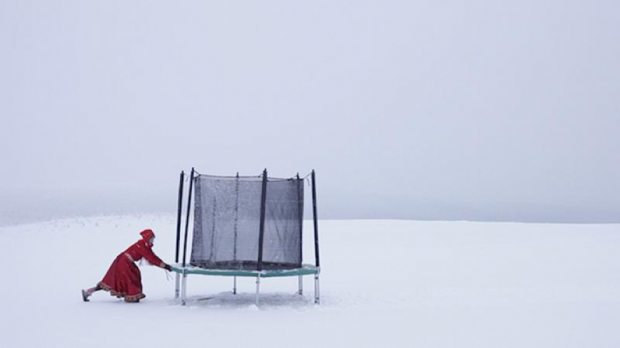 The works of five Finnish artists come together to form the latest exhibition in Galway Arts Centre entitled: Bad (L)attitudes: Reassessing Finnish Femininity. The artists, Suvi Aarnio, Johanna Havimäk, Marja Helander, Kirsti Kotilainen and Heta Kuchka, investigate both the traditional modes of expression and representation of the female body as well as the modern reclamation of the female body within contemporary art. The concepts of femininity in both their native Finnish culture and in the broader global context are also discussed within the five practices, which feature a variety of mediums – most notably video installations and concept clothing. Finland was regarded as a pioneer in women’s rights in the early half of the 20th Century – being the first country to give both the right to vote and the right to stand for election to its female citizens in 1906, electing its first female MPs the following year. Through their work these five artists highlight the similarities and common social attributes between Ireland and her European Union ally. With this progressive past in my mind, it further serves to highlight the disparity in rights experienced by Irish women compared to the Nordic counterparts – Ireland and her 8th Amendment was highlighted as being “cruel, inhuman or degrading” earlier this summer by the UN. It is with a wry wit and an unbashful approach these five artist tackle their heavy subject matter. Due to its progressive policies and frequent placement in the upper echelons of global surveys such as ‘best place to live as a woman’ or ‘best place to be a mother’ etc., it is often incorrectly assumed that a debate on gender is no longer needed in Finland. This exhibition highlights that this dialogue is still needed regardless of country – something painfully apparent in Ireland. 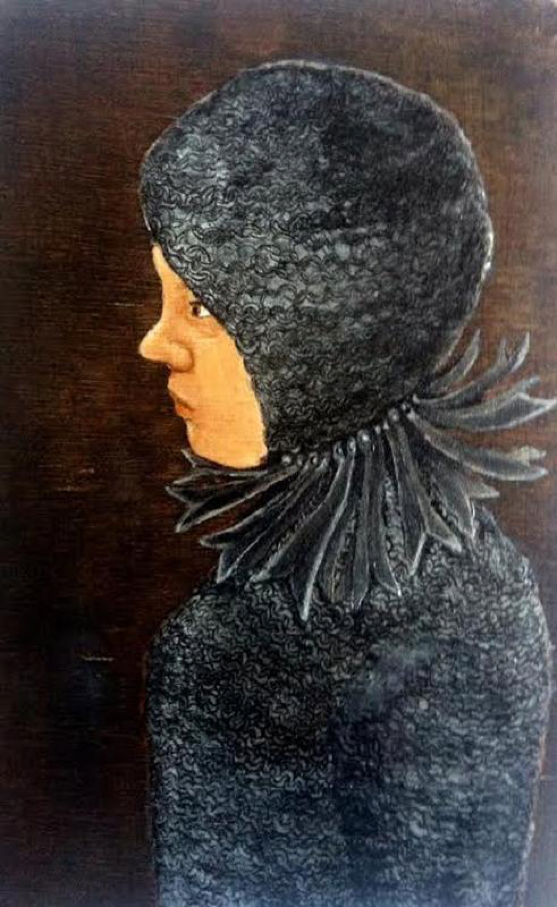 Belfast: “Hockney’s is a career that sees no hint of slowing down, and this show begs the question ‘why would it?’.” 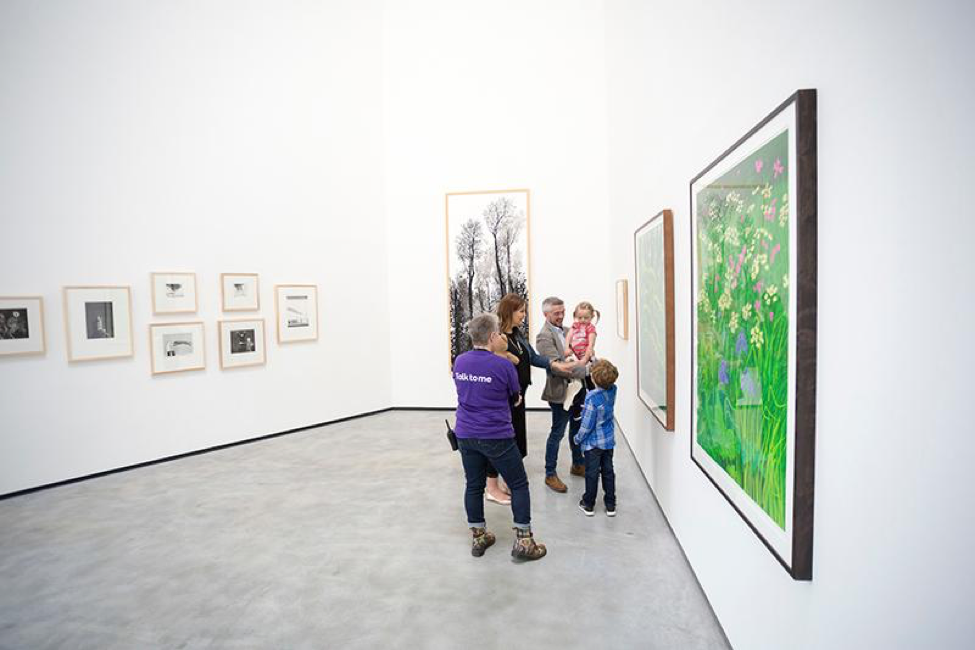 David Hockney is a behemoth of 20th Century British art, recognised as one of the forebears of 1960s British Pop Art movement. Hockney, alongside the other living giant of the movement Sir Peter Blake, has provided inspiration for successive generations of artists as well as heavily influencing key areas of culture in the decades since he burst onto the post-war arts scene. I draw, I do is the latest exhibition in Belfast’s Metropolitan Arts Centre and takes a look at Hockney’s practice prior to his establishment in the 1960s in what is the first significant collation of his work on the island of Ireland. Featured in the exhibition are drawings from 1950s when Hockney was a young student in Bradford Regional College of Art. As the title alludes to, Hockney is a firm believer in the importance of the practice of drawing and these early forays, many of which have never been displayed publically, cast an intriguing light on the artist’s formative years. As well as these drawings the artist’s acclaimed series A Rake’s Progress is featured along with some of Hockney’s most recent digitally drawn pieces. For the latter Hockney, never one to shy away from experimentation even as he approaches his 80th year, created works on iPads – a medium he has explored in recent years. Hockney is one of those artists, similar to other cultural titans from the 1960s, that can often be frivolously dismissed by audiences purely on over-saturation alone. This exhibition serves to smash that assessment and book-end a career from his earlier days in Bradford through to his continued pushing of boundaries via his latest digital works. Hockney’s is a career that sees no hint of slowing down, and this show begs the question ‘why would it?’. 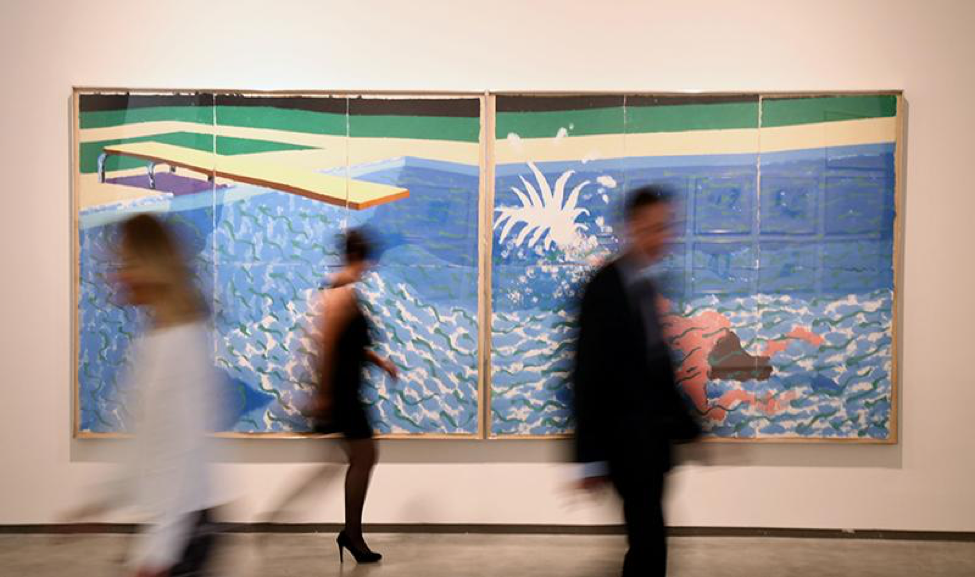 Cork: “With the mediums on display featuring, among others, painting, photography, film, as well as sound and installation pieces, the audience has the opportunity to explore a vast array of artistic outputs” 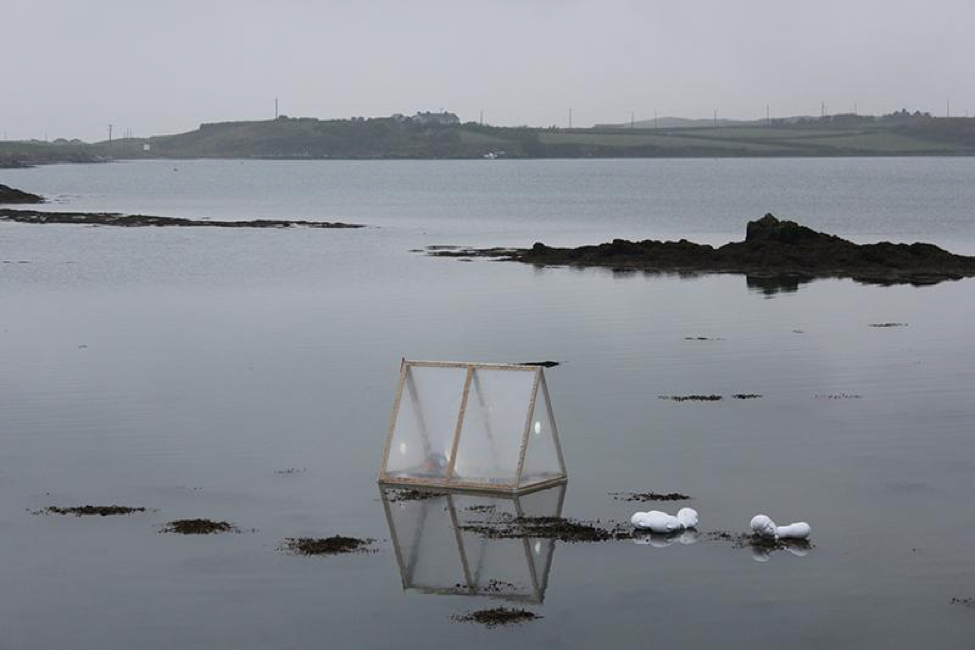 Graduation shows are always exciting and vibrant affairs. Regardless of artistic discipline, there is an excitement for those who have completed their course and an excitement for the audience who get to see a broad cross section of approaches and styles. Most traditional group shows usually see artists of either similar mediums and aesthetics come together or those whose work fall under a common banner or theme. With graduation shows these factors are dispensed with and artists are brought together by circumstance and situation. These allows for a greater diversity to exist between works and this is evident in Uncover, the current exhibition in Uillinn (West Cork Arts Centre). Uncover features the works of 17 recent graduates from the Sherkin Island BA Visual Arts Programme – a DIT programme based on the Cork island in conjunction with Sherkin Island Development Society and Uillinn itself. With the mediums on display featuring, among others, painting, photography, film, as well as sound and installation pieces, the audience has the opportunity to explore a vast array of artistic outputs. If a regret exists within this show it is that it was initially located on Sherkin Island itself, spread over 13 locations and visitors followed a trail to experience the works in-situ where they were conceived and created. While this show generates that small selfish regret it is still a key document of these 17 artist’s journey. With that in mind, go and celebrate the work these artists have created and glimpse at their future careers. 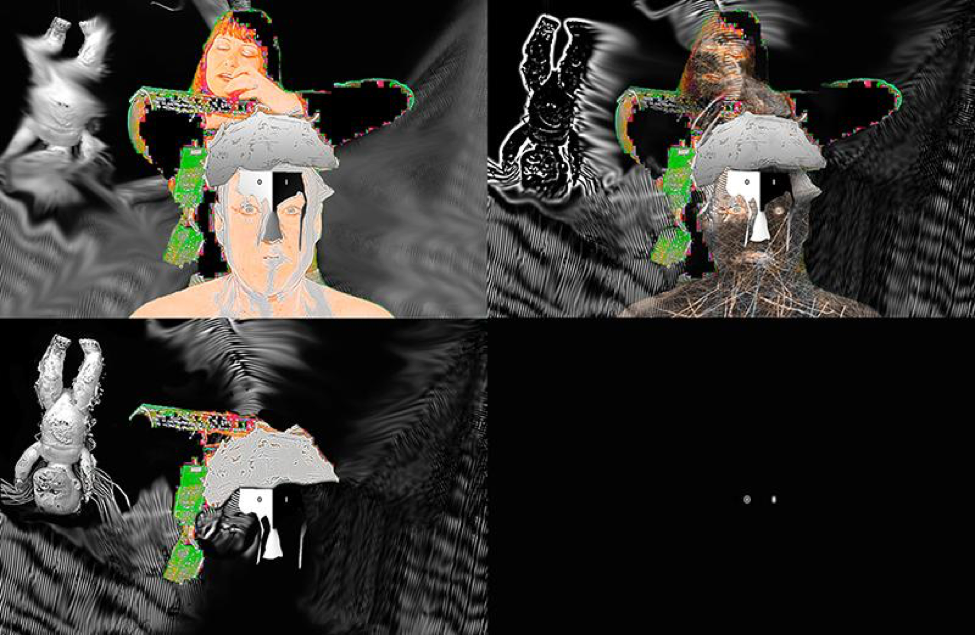