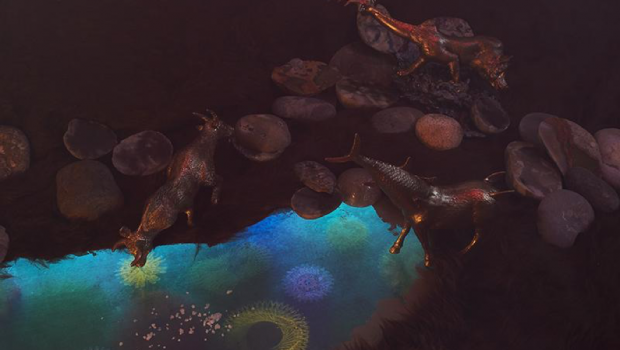 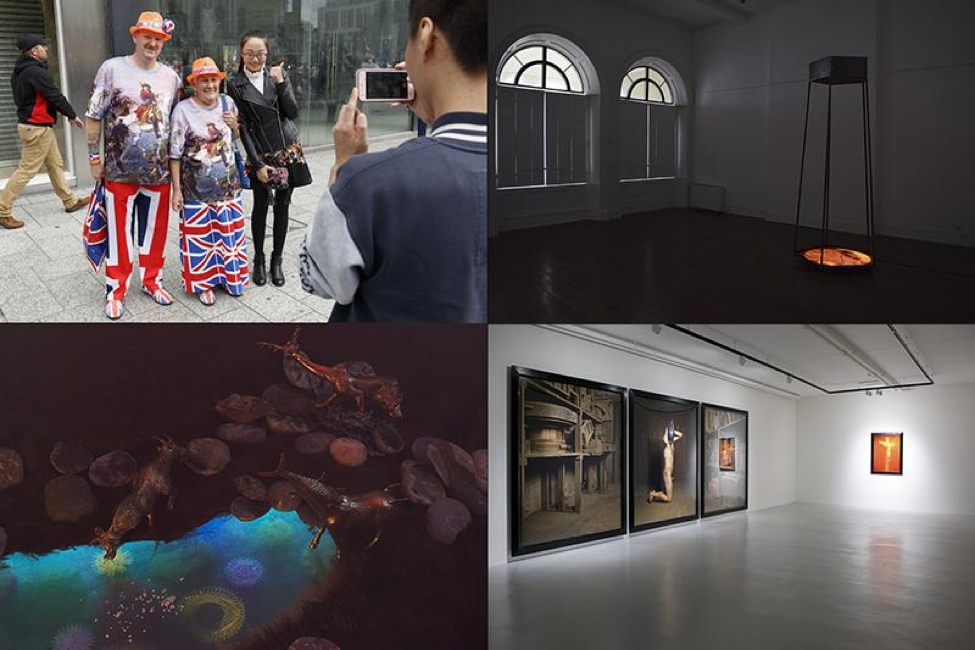 Mankind has always will be obsessed with time. How long does anything take? When will something happen? We use it as a yardstick for task and events. As a society we’re enthralled by time-travel, constantly preoccupied with how long things take to do and get to. We’ve even coined the phrase ‘time immemorial’ to indicate how long things have been the way there are – it’s July 6th 1189 in case you were curious. Time is a revisionary tool by which we revisit the past and judge previous actions, comparing and contrasting them to now – they same time heals all wounds. In an artistic sense it has provided themes and ideas for movies, music and art for decades, nay centuries. The four shows featured in this edition of Picture This see time present in both the fore and the core of the exhibitions. In Belfast we see Martin Parr comment on the passing of time and how it has affected the capital’s tourism industry. In Derry Andres Serrano returns to the topic of torture after a 10 year absence. Given enough time and anything is possible even a mountain can move, this sense of challenging perceived acceptance is discussed by Paul Murnaghan in Limerick. And finally the lose of time and our understand of its ownership is considered by Ruth Clinton and Niamh Moriarty in Cork. A diverse and engaging set of four shows, be sure to take the time to see – all puns aside. 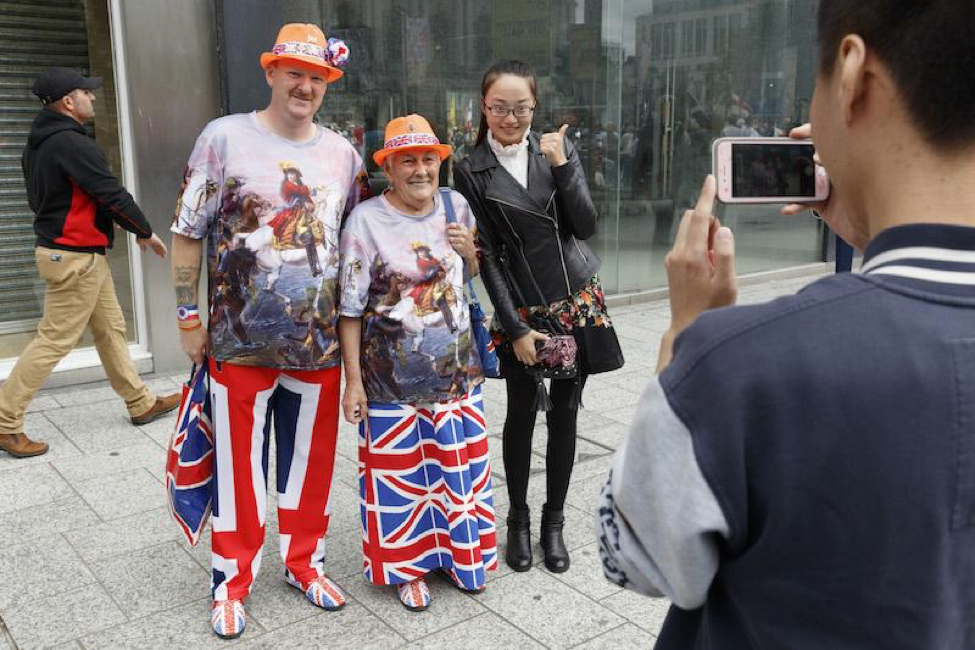 Belfast: “Few would have predicted that it would takes less than two decades for the city’s infamous peace walls and other locations of the Troubles to become tourist attractions.”

What: Welcome to Belfast
Where: Belfast Exposed
When: 14th October to 23rd December

While it’s safe to say that the notion of a more open and safe Belfast was almost universally hoped for prior to the Good Friday Agreement in 1998, few would have predicted that it would take less than two decades for the city’s infamous peace walls and other locations of the Troubles to become major tourist attractions. Such has been the acceleration of the capital’s tourism industry that over 7 million people a year visited the city in 2010, 2011 and 2012 – more than four times the entire population of Northern Ireland. These figures have no doubt increased since then, as 2012 marked the 100 years since the sinking of the Titanic and the opening of the city’s Titanic visitor centre. Belfast has always been a port city and in recent years it has been the arrival of big ships rather than their departure that has become the norm. It is this clash of old and new, tragedy and rejuvenation, division and unity that forms the basis of the current show in Belfast Exposed featuring the work of British photographer Martin Parr entitled Welcome to Belfast. Parr has been established as one of the key documentary and photojournalistic eyes of his generation through his often satirical but respectful approach to his subject matter. His work often takes on anthropological views as he documents the tropes and idiosyncratic natures of people. We see tourists grinning beside locals decked out in their cultural signifiers, the glamour of cruise ships contrasted against the industrial docks of the Lagan and holidaymakers adding graffiti to peace walls as part of the ‘Troubles Tours’. Belfast will be forever tied to the tragedy of the Titanic and the events of the subsequent decades that shaped the discourse of its standing as a modern city. In Welcome to Belfast Parr presents a visual dialogue of this city eternally intertwined with its past, a past that is shaping and defining its future. 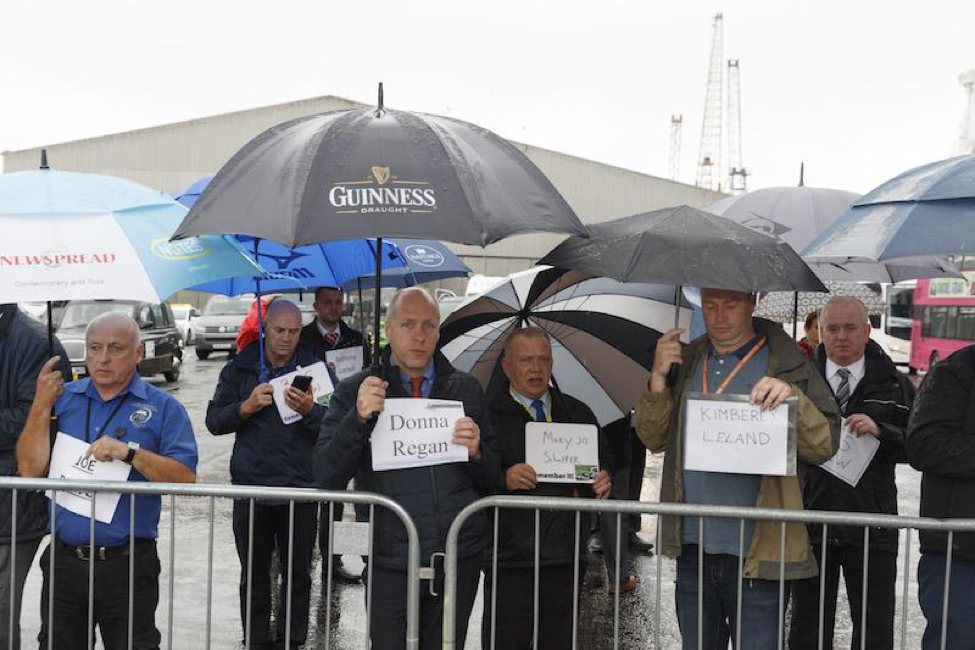 Cork: “It is this notion of temporary and transitional that drives the work, whilst also looking at the concept of communication and recording – time is after all a means by which we record our actions and plan future adventures.” 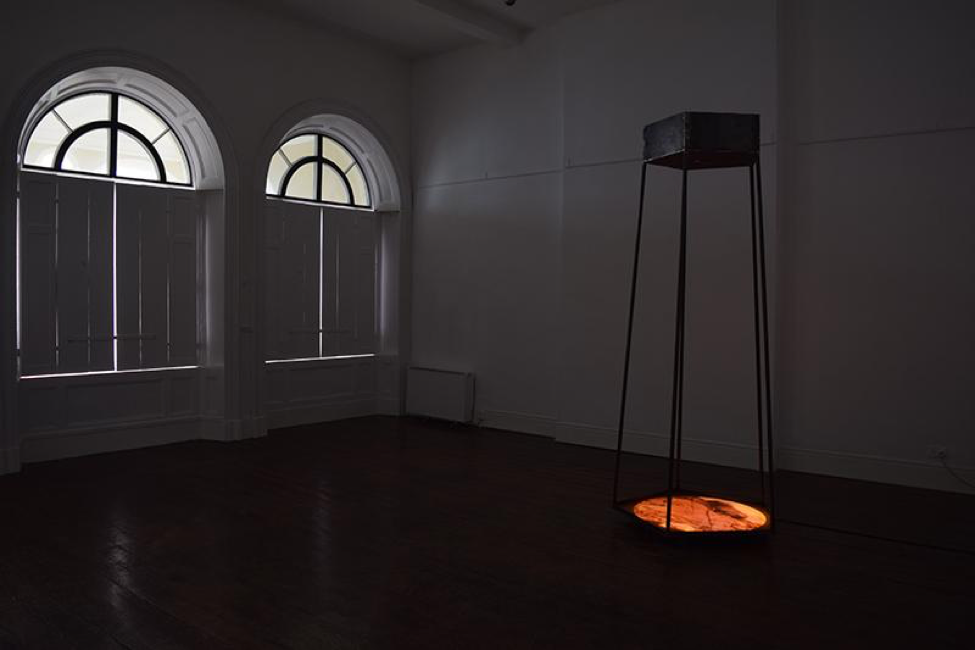 2016 has presented the centenary of many events in Irish and European history, most notably The Rising in Dublin and the Battle of Somme in France. Many of these moments have provided departure points for exhibitions in 2016, but it is something less revered and less remembered with such gusto that has provided the inspiration for the latest show in Cork’s Sirius Arts Centre – the Time (Ireland) Act of 1916. Introduced in the weeks following the Easter Rising, the Act saw Ireland scrap her own personal Dublin Mean Time and ape her sister’s Greenwich Mean Time. The result saw the curious quirk of Ireland ‘lose’ 25 minutes and 21 seconds in order to ensure the homogeny between the islands. Time (Ireland) Act features the work of Ruth Clinton and Niamh Moriarty, who have been collaborating together since 2010 predominantly in the mediums of video, performance and installation. This exhibition is also the result of a year long residency the pair have undertaken in Cobh. The idea of ‘losing’ time and specifically ‘losing’ a 25 minute time period is one fraught with contradictions and counter-contradictions. In order to ‘lose’ something, one must own it, tangibly feel it. The minutes didn’t disappear, they were moved, they remained the same, they were recorded differently. It is this notion of temporary and transitional that drives the work, whilst it is also a show looking at the concept of communication and recording – time is after all a means by which we record our actions and plan future adventures. The exhibition present installations featuring ancient modes of recording time, the sun, alongside more modern techniques, computers. It also constructs and carries nonlinear dialogues through it’s various pieces with the notion of what is time and what can we do with its possibilities presented. Closing this Sunday (30th October) be sure to catch this show before it’s gone, like those 25 minutes. 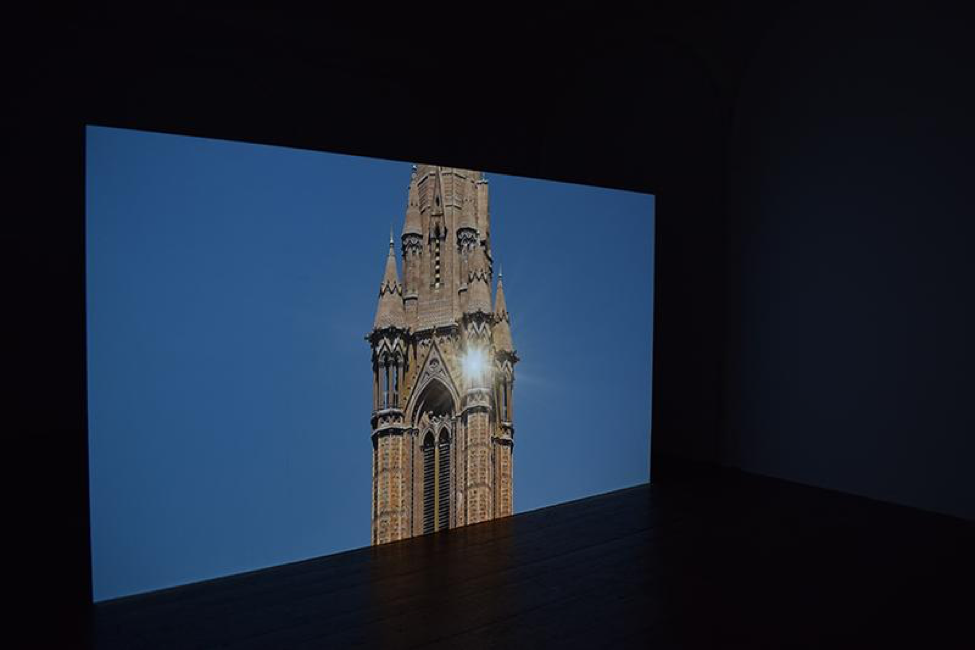 Derry: “The reason for such venom from a minority of detractors is the reason many others respect and enjoy Serrano’s work – his unflinching constitution when it comes to tackling difficult subject matter.” 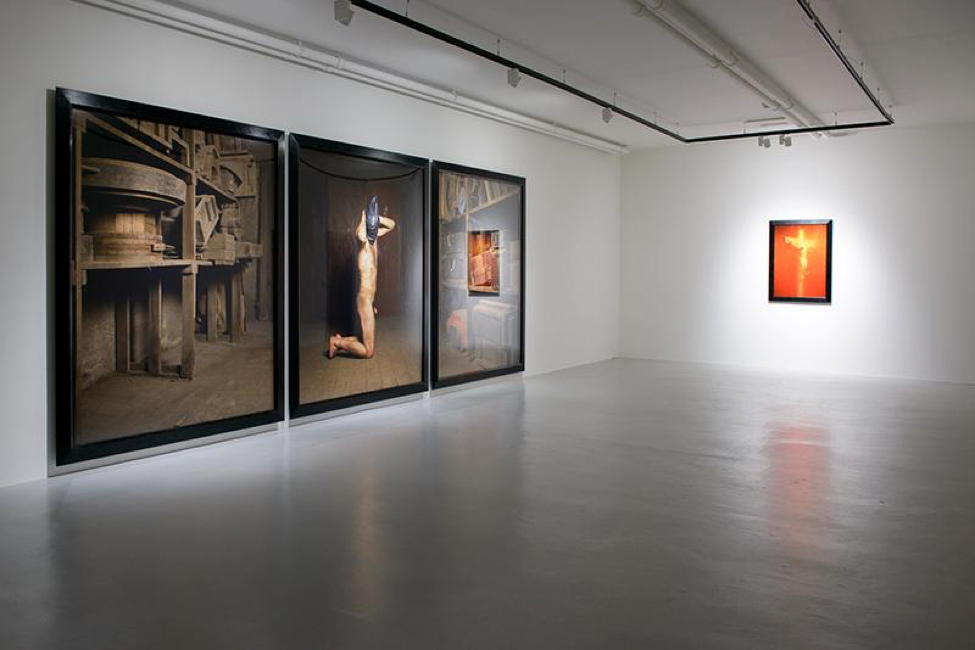 What: Torture
Where: Void Derry
When: 8th October to 17th December

The work of American photographer Andres Serrano has been known to generate vastly polar responses. Many rightly recognise him as an artist pushing the boundaries of photographic art while others take umbridge with both his choice of materials and his subject matter. In 2007 his work was vandalised in Sweden by neo-Nazi groups, in a twist of irony the group who did so posted a video online featuring them carrying out the act while listening to heavy metal music – Serrano has provided the album art to not one but two Metallica albums. Four years later and 1,000 people took to the streets of Avignon in France to protest his work, with two pieces being vandalised in a gallery the next day. The reason for such venom from a minority of detractors is the reason many others respect and enjoy Serrano’s work – his unflinching constitution when it comes to tackling difficult subject matter. Serrano’s work often, but not always, depicts Christian topics with his most famous/infamous piece being his 1987 Piss Christ, which features a plastic crucifix submerged in a tank of the artist’s own urine. This work, is presented alongside a much larger body of work entitled Torture in Void Derry. The genesis of his new series can be traced back to over a decade ago when Serrano was commissioned to produce a series of images for the New York Times on the subject of torture. He has now returned to this subject matter, photographing genuine historical torture devices as well as staging scenes of people interacting with these and other less historically accurate machines. The result is a chilling yet beautiful crafted set of imagery, displayed here in large format in Void – using darkroom rather than digital printing methods with many of the works have been split into triptych arrangements. Serrano has always presented imagery that straddles ambivalence and ambiguity, detaching himself from the moral compass of the worlds and people he documents. This approach pushes the critique of his subject matter onto the viewer, enhancing their awareness of the topic and furthering the dialogue his pieces spark. Torture runs until mid-December and is presented in partnership with a/political. 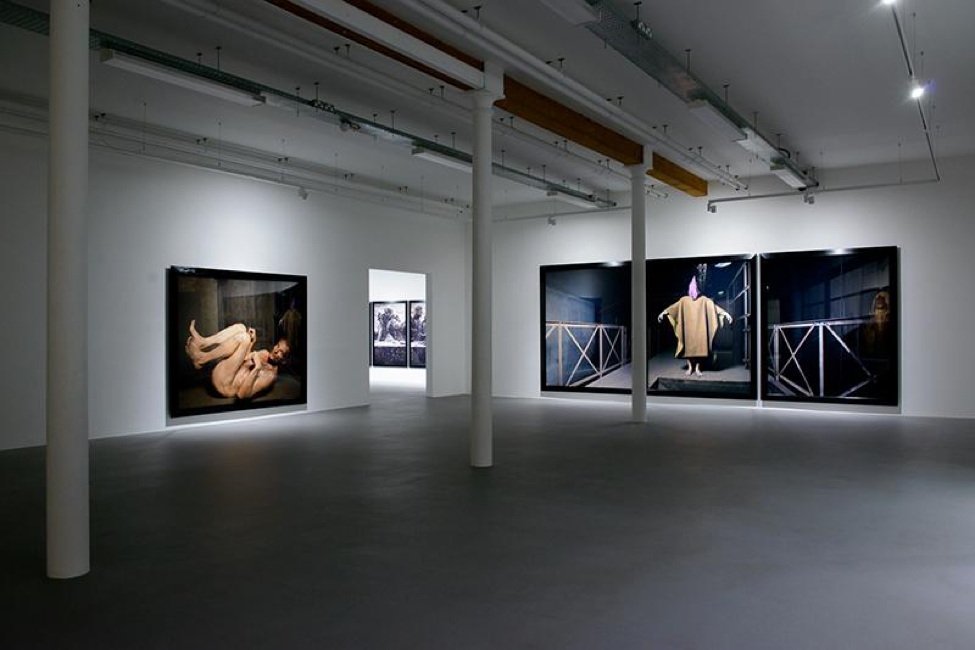 Limerick: “Their innards have been documented and presented via a variety of platforms ranging from sculptural projections onto side table to prints and large video pieces.” 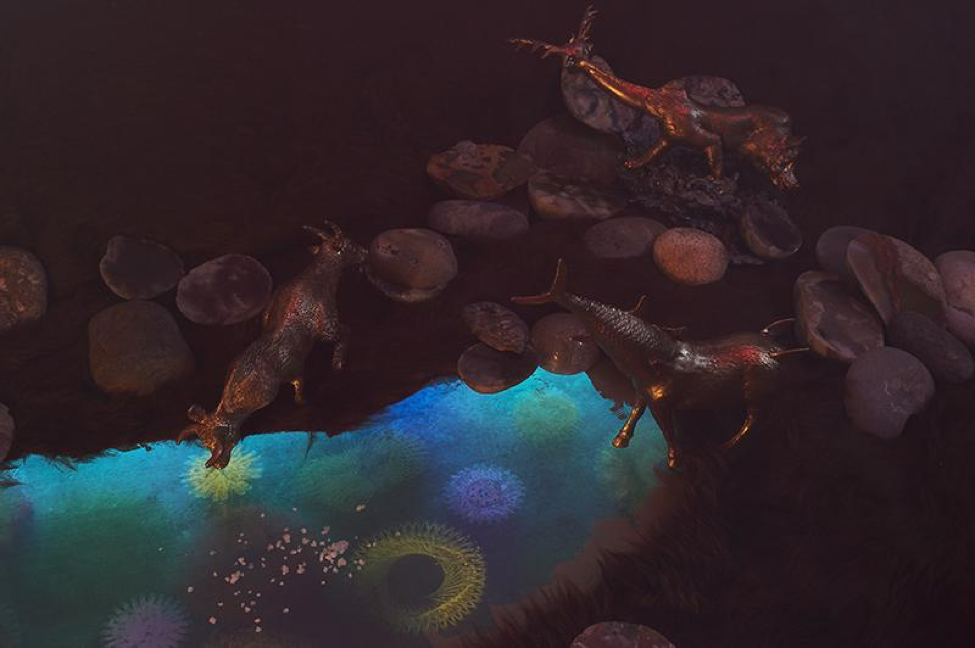 What: All mountains are moving
Where: Limerick City Gallery of Art
When: 15th September to 30th October

How fixed is something? How permanent is anything? Even mountains, those bastions of immovable mass, aren’t secure in position or size. In the last decade alone Mount Everest has moved 40cm to the north-east and grown by another 3cm. It is taller and in a different location. Any sense of pattern or regularity, even assuredness in direction, must be dismissed. In a single day, 25th April 2015, in the wake of a 7.8-magnitude earthquake, Everest reverse this decade of direction and hopped back an inch. Nothing is fixed, nothing is permanent. While this notion of the physical altering  provided the title for the latest show in Limerick City Gallery of Art it is the more ephemeral and emotional concept behind this process that Paul Murnaghan drew inspiration for All mountains are moving. The work is a look at the idea of pareidolia, the psychological phenomenon of recognising familiar faces or sounds when none exist – think seeing a man’s face on the moon and playing records backwards to hear cryptic messages. This idea is presented via a series of works that centre on a collection of beach pebbles split and polished by the artist great-grandfather in the early part of the 20th century. Their innards have been documented and presented via a variety of platforms ranging from sculptural projections onto side table to prints and large video pieces. At their core they challenge our perception of what is real and what is possible. Murnaghan is an artist who challenges space as well as perceived conventions, he does so in All mountains are moving through a collection of immersive and engaging pieces that query our own certainties. Anything is possible, anything is real. Nothing is fixed, not even mountains. 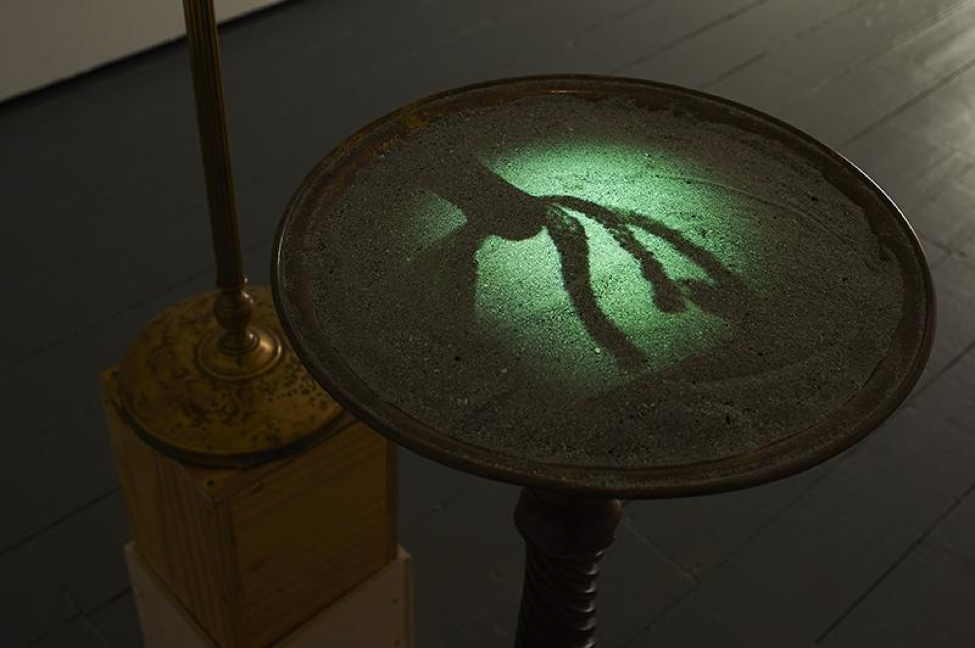