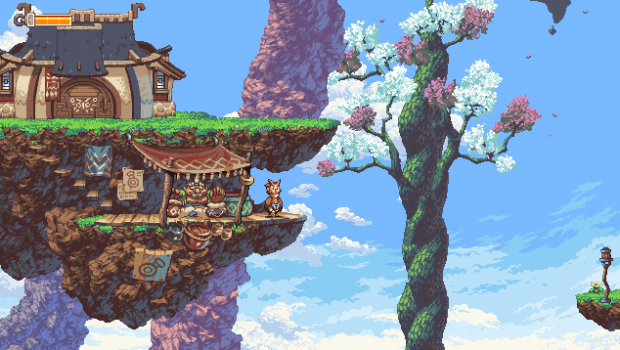 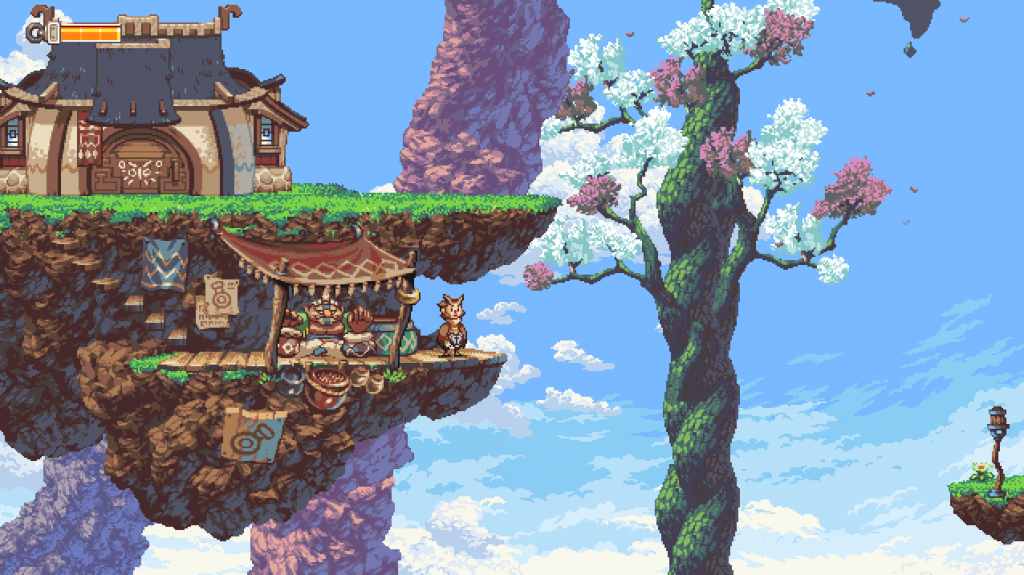 In many ways, Owlboy isn’t a game about success, it’s a game about those little failures which define everyday life. It’s the story of Otus, a plucky apprentice owl who is mute and from the get go, not very good at doing his job.

The Owls are bird-human hybrids that guard a world of floating sky islands from sky pirates and other trouble, but as we see in the opening of the game, Otus isn’t exactly cut out for all this malarkey. He can’t fly very well, and he makes stupid mistakes. The kind of mistakes we’re all prone to, really. His master comes down hard on him, making him feel entirely useless, and by proxy, instantly ingratiating you to poor, dweeby little Otus.

Owlboy has been in development with Norwegian indies D-Pad Studio since 2007, and while the lengthy development is a little strange, there’s real evidence of those nine years being put to good use. Owlboy is bursting at the seams with charm and imagination. Its sixteen bit style is at odds with its vibrant characters and detailed world that rivals Studio Ghibli at their best. Everything about the game feels carefully crafted, and the dialogue and interactions between its quirky characters feel like they’ve been pulled from great Saturday morning cartoons of old.

Gameplay wise, Owlboy takes very familiar concepts, and twists them in interesting ways. At its most basic, it’s a Metroidvania game, that strange portmanteau of styles that has long been a favourite of indie developers and gamers alike. As you progress through the game, you supplement your powers with upgrades, fresh friends to help out, and other boons that make old obstacles passable and previously tough foes just that little bit more manageable.

Where Owlboy bucks convention however, is in the way it handles these powers. Otus can fly indefinitely from the very start of the game, and while his own abilities are limited to a roll, and a spin attack, he can carry a variety of items. Food, treasure, rocks, buckets of water, and most importantly, his friends.

Each of these friends has their own special ability and different powers, and early on in the game, Otus gains the ability to teleport these friends to his talons at will. Your first companion, Geddy, has a rather weedy blaster weapon for fighting foes and destroying obstacles. Your second buddy, [pirate name] has a powerful shotgun with a slow recharge time, and a flame for lighting torches and burning vines and other obstacles.

As you travel through the game, you’ll work with a range of companions to help you achieve your goals, and the wonderful thing is, they truly feel like friends. Otus’ true power comes from his relationships with those around him, and the heart-warming yarn the game spins makes you fall in love with little Otus. He isn’t powerful, he isn’t talented, but by golly, he’s brave, he’s a hero. It’s a fascinating way to handle things, because poor Otus is so put upon by other characters early in the story, it wouldn’t make sense for him to become a gun toting bad ass when he enters a dungeon. Owlboy isn’t about Otus becoming some sort of demi-god, it’s about him learning to make the most of his mediocre self.

The story of Owlboy takes some unexpected twists and turns, charting a journey that is as compelling as the gameplay is. The game has a fantastic sense of forward momentum, with light puzzling, fiendish platforming, and surprisingly adept stealth sections keeping the action fresh. The only place that Owlboy stumbles is when the difficulty spikes, and the relatively unforgiving checkpoint system becomes apparent. Later in the game, it’s not unusual to watch Otus die ten times over in one sequence, and tough boss battles often come after unskippable cut scenes. Its fine to get you fired up the first time around, but when it’s your tenth rodeo, things become a little stale.

However, the checkpoint criticisms are about the only issue I have with D-Pad Studios gorgeous game. Owlboy masterfully pulls you into its world with colourful, multi-dimensional characters that are vibrantly animated, and incredibly unique. The game switches smoothly between cerebral puzzling, intense battling, and switches up its mechanics in frequently fiendish and inventive ways. It crafts a story that is heartfelt and compelling, and even if the spectacular gameplay and inventive world didn’t keep you playing, you’d be along for the ride anyway to see how things turned out for Otus and his motley crew of odd friends. Jason Purdy