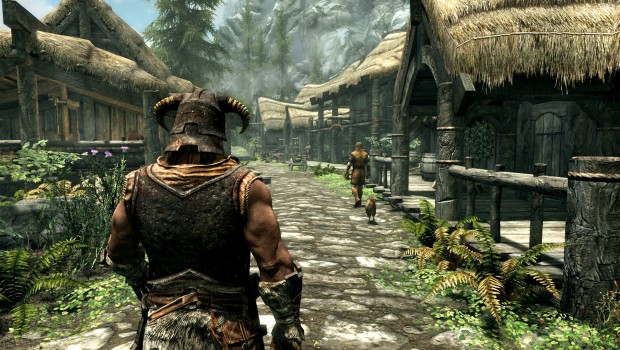 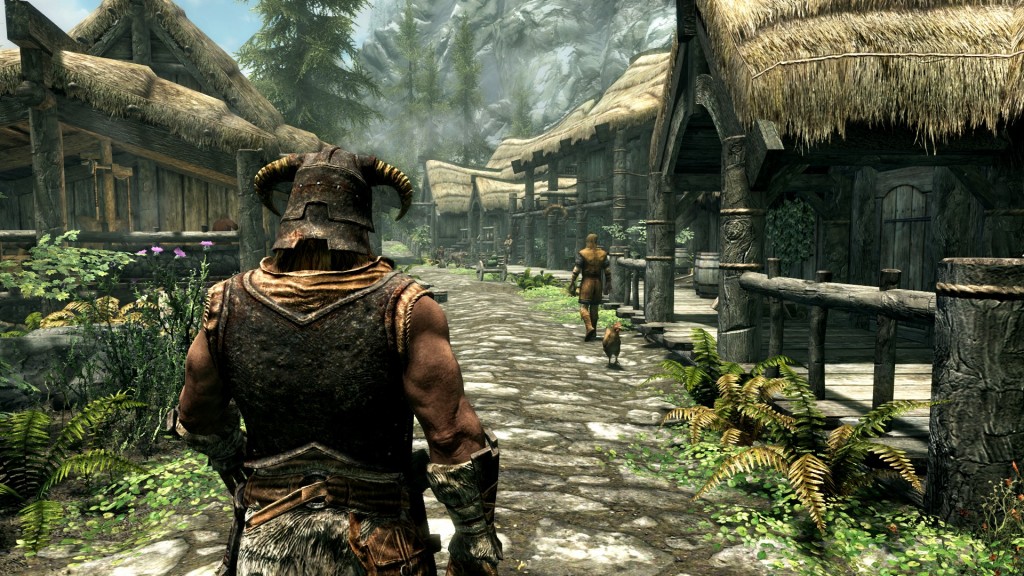 Traversing a vast, beautiful terrain. Investigating ancient ruins, abandoned mines, towers, oubliettes and outposts. Crafting spells, recipes and potions. Renting a room in a remote hilltop inn. Becoming a vampire. Becoming a werewolf. Becoming a thief and an expert pickpocket. Joining a school of wizards. Being inducted into a sacred order of magical monks. Spelunking in subterranean caverns. Buying a house and filling it with whatever random kipple you desire. Buying a castle and doing the same. Getting married. Buying, selling, trading and stealing. Learning the art of blacksmithing. Hunting down a headless horseman. Fighting dragons. Taming dragons. Riding on dragons. Fighting skeletons, wolves, mammoths, giants, soldiers, killer fish, mutated crabs, barbarians… or anything that moves and breathes. Learning arcane “shouts” powerful enough to fire said skeletons, wolves etc. up into the air or off the side of a cliff. Recruiting a companion then shooting them up into the air or off the side of a cliff. Reading books. Finding hidden spells in books. Solving a murder mystery inside a lighthouse. Getting embroiled in a civil war. Helping ghosts avenge the people who killed them. Running away from ultra-powerful frost demons. Flirting with whichever gender you prefer. Being good or evil. Lollygagging. Taking an arrow to the knee.

These are just some of the things that you can do in Skyrim.

Recently, I told a friend that I had sunk around 200 hours into Skyrim, Bethesda’s utterly brilliant open-world fantasy adventure, upon its original release in 2011. It’s not really that shocking a statistic, I reasoned. I mean, 200 hours equates to roughly 10 days, if one chose not to sleep, eat, visit the small room or perform any of the basic human functions other than breathing. “Och, that’s nothing,” my friend said. “I racked up 500 hours.” This might sound like a ridiculous notion. How could anyone spend so long faffing about with a videogame, you might think. And rightly so, until you actually spent some time with Skyrim, because if you did you would subsequently find yourself spending a lot of time with it. Skyrim offers the same sort of wonderment bequeathed upon players by titles such as The Legend Of Zelda: The Ocarina Of Time and Chrono Trigger. It is the sort of game where anything seems possible, where any and every choice, no matter how bizarre, has been catered for by the designers just in case a smattering of players might try and do it. Skyrim is a game that is deep and broad and rich in detail, and one that you daydream about when you are not playing it. Seriously, that is no word of a lie. There are days, particularly in recent turbulent weeks when life really has appeared, to quote Hobbes, “solitary, poor, nasty, brutish and short”, when it is preferable to spend time in an entirely imaginary world.

And what a world it is. The universe of Skyrim is truly massive, at times so massive that it can be overwhelming. The opening section of the game, a ride on a cart followed by a perfunctory fight with a dragon, if there can be such a thing, does little to prepare you for the boundless wonders to follow. Subsequent dragon fights, for example, are breathlessly exciting: wandering up a snowy mountain or ambling by a glittering stream, you see a shadow swoop across the ground, hear the music swell, and then an enormous beast thwomps down in front of you. Moments like this are pure gaming gold, and there are many, many of them.

The visuals have been lovingly tweaked and upscaled for this re-mastered version, and while facial animations leave a little to be desired, the god-beams breaking through branches and water textures are gorgeous. Besides, there is more to the graphical sharpness than just aesthetic appeal. The rule is: if you can see a location, you can travel to it. This lends proceedings a delicious sense of freedom and, again, possibility. Like Red Dead Redemptionand Fallout and other games of this type, Skyrim rewards players for veering away from the main storyline in search of the dozens of side quests secreted into all nooks and crannies of the map.

All hyperbole aside, Skyrim truly is one of the best games of the last console generation. Rather than a rushed repackaged job, the Special Edition also adds in all of the DLC packs, which expand the storyline even further, and the opportunity to download user mods, which range from the serious to the sublimely odd. These fancies are entertaining enough, but it is the fantastical world of Skyrim itself that will keep luring you back hour after hour after hour. Absolutely essential. Ross Thompson