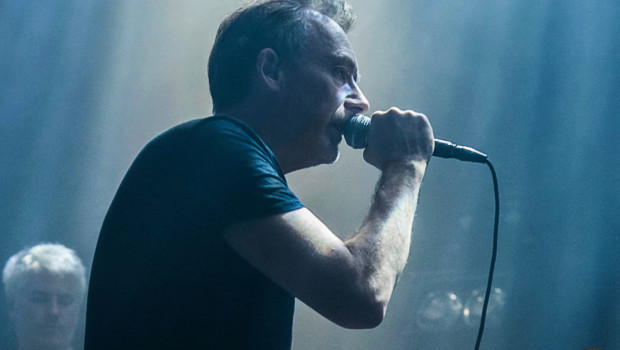 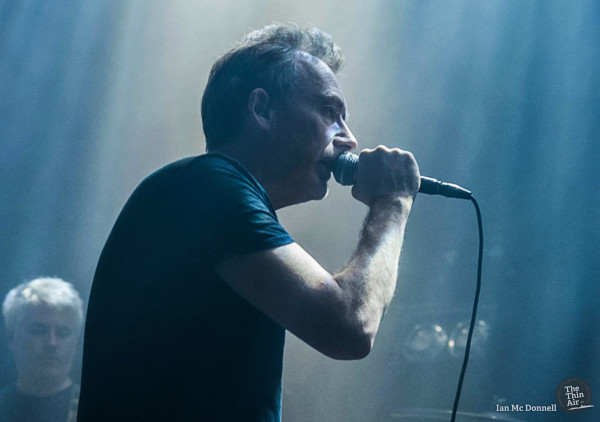 It seems that there’s a different vibe in The Jesus & Mary Chain camp since the release of Damage and Joy in March of this year; antagonism replaced with affability and scorn with humour. It’s in and around six months ago that the band visited The Academy with their first studio album in almost twenty years fresh off the presses, and tellingly on that outing it was Psychocandy material that made up the bulk of the setlist. Not so in Vicar Street – their seminal debut rears its head, but tonight’s is a much more rounded selection and the band much more sure-footed, with the new album now hashed into submission on the touring circuit.

The Jesus & Mary Chain’s influence shouldn’t really be understated. The tendrils from their early records, and those of their ‘80s peers, certainly made their way stateside to the ears of Wesley Eisold, the driving force of Cold Cave. “Can we make it darker please?” Eisold requests immediately after the quartet’s second song, matching the atmospherics with the band’s sounds as his shades and leather jacket blend into the stage gloom even more. The singer, at times channelling Robert Smith, comes from the Jim Reid school of self-contained near-immobility, occasionally breaking out when propelled by a punchy backbeat or oscillating synth takeover. Noise rock and electronica combine through their set, drums harsh and to the fore with guitar and synth both struggling for the upper hand and variously winning in the fight. They exit with as little fanfare as they came on, while a synth trails off on a darkened stage. “Oh, they’re finished,” mutters a nearby voice, both a little surprised and a little disappointed. Hopping between electro pop and sounds of a more industrially informed density, it’s a darkly hued and enjoyable, if at times disjointed set. 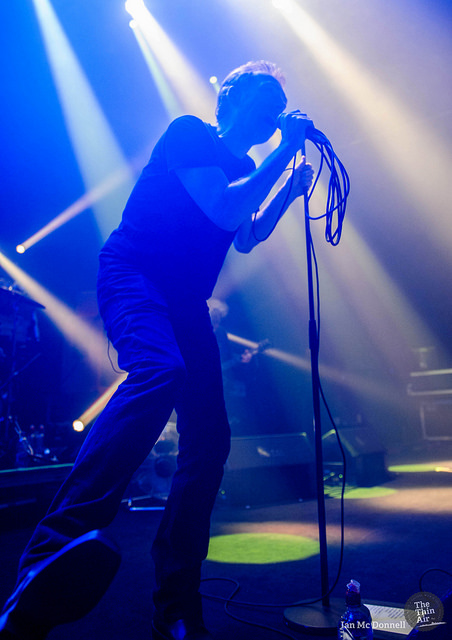 A whine and grind from William Reid’s guitar sets ‘Amputation’ alight, the flare of strobes answering the thump of Brian Young’s drums as the headliners embark on a set that leans on heavy and loud as its main means of assault. Despite the heart-quickening transcendence of ‘Head On’ early on, there is an occasional stall in proceedings. “Just talk amongst yourselves,” Jim instructs, as William wrestles with his guitar tuning for ‘Happy When It Rains’. Despite the occasional jibe (threatening to play a Steely Dan cover) the caustic bite of old seems instead tempered by good-humoured provocation. Similar issues delay ‘Between Planets’. The crowd cheers the faltering start, but the guitar issues are short-lived and the quintet throws back in with double the intent for a muscular run-through. It’s almost as if the fuck-ups add an edge for all involved, band and audience alike, but then The Jesus & Mary Chain always thrived on tension.

“Are you still with us out there?” Jim asks. After the mishaps and subsequent routs of those last couple of songs, even if the band register it as a loss, it feels as if the room is behind them more than ever. The singer makes the most out of ‘Some Candy Talking’ and ‘Halfway To Crazy’, more impassioned deliveries than his previous endeavours, but as the gig progresses it seems that sludge-y, by-numbers rock pummelling takes precedence over the more nuanced aspects of their sound. Although kicking off with ‘Just Like Honey’, the encore and the ensuing encore – two momentum killing walk-offs that Jim foretells even before they happen – lean heavily on the jackboot to the face approach.

It’s almost with a knowing flip of the middle finger then that a fine, garage-y ‘I Hate Rock’n’Roll’ stamps out the final night of their European tour, a hint of The Modern Lovers evident in Jim’s corrosive delivery. They walk off to the deafening, lingering drone of William’s guitar, flatlining a set that while covering the bases and hitting a few high marks, just seems to lack the excitement and unpredictability that used to come hand in hand with a Jesus & Mary Chain gathering. Justin McDaid 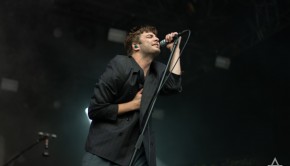