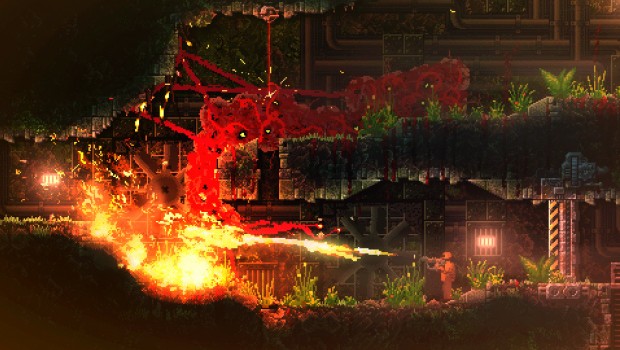 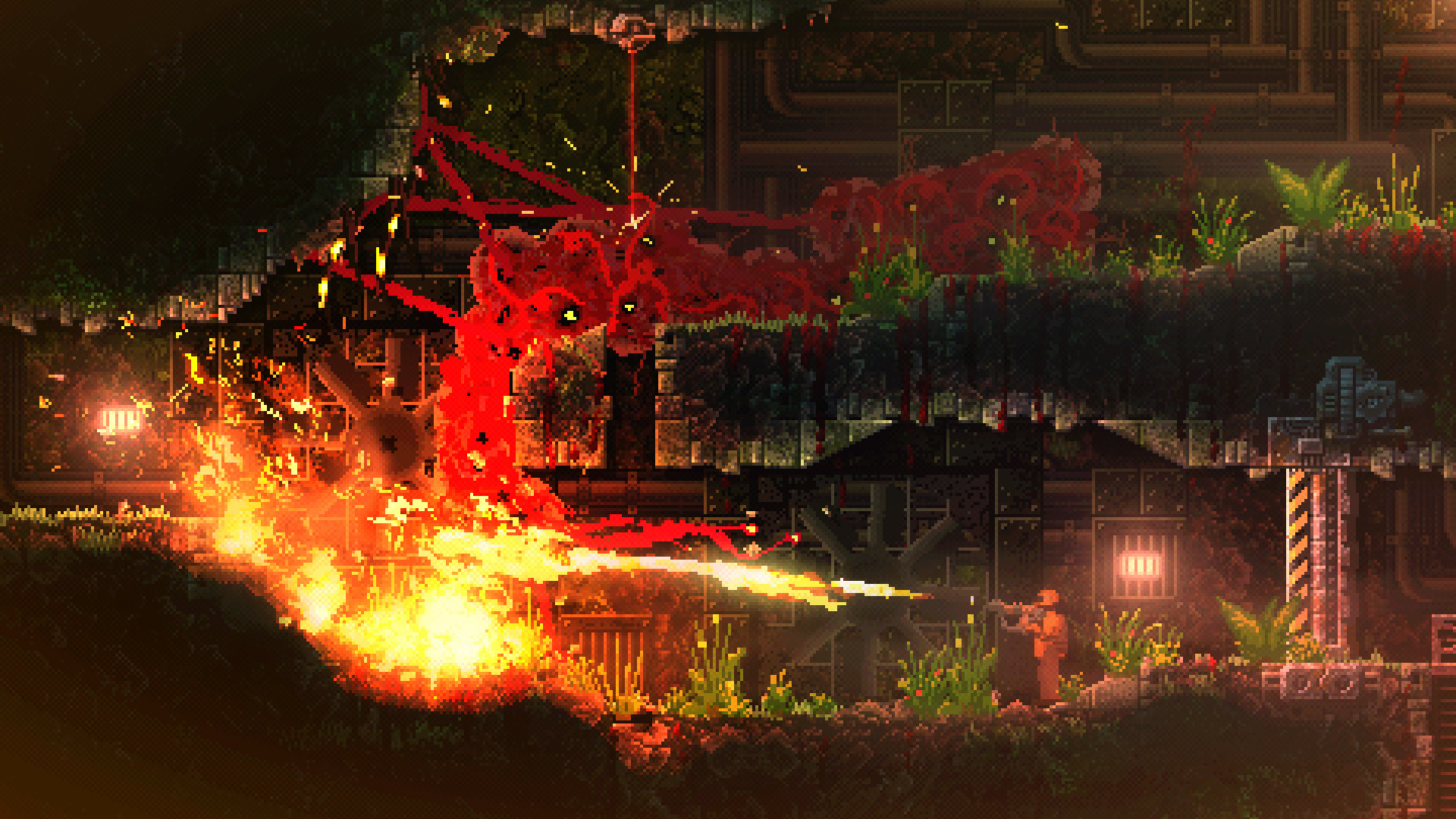 A blood red, mutating, tentacled organism rampages around a subterranean research facility ripping apart gormless scientists and security guards as it tries to escape its confinement. It is a set-up that should be familiar to fans of Horror or Sci-Fi cinema: we have seen such gruesome shenanigans many times before in media such as  Life, Stranger Things, The Thing and lots of others with the word “thing” in the title. However, the gimmick in this twist on the Metroidvania sub-genre is that the player controls said beast: you start the game as a relatively small globule of appendages and viscera, breaking out of a specimen jar before fleeing along ducts and pipes. The game provides no guidance or directions whatsoever, presumably to emulate the creature’s feelings of disorientation but video game instinct should tell you to sneak up on the first pitiful human you come across. Do so and you will discover that you can gobble them up, and as a result your amorphous form will expand and grow yet more fangs and tendrils. Do it again, and the creature will grow bigger and more dangerous. Carrion, as the name might suggest, is immediately grim and gory: its retro, 8-bit graphics and digitised, comical screams do little to disguise its macabre sense of humour. People will cower terrified in corners or frantically shoot their guns but just because they are no more detailed than the avatars in classic Another World does not make what you are doing any more excusable. Carrion walks this line between comedy and horror for its entire albeit short duration.

One might argue that playing an amorphous biomass with conscience or ethics is no different than shooting disposable soldiers in Call Of Duty but what sets this title apart is the number of puzzle elements blended into its alien DNA. As you progress through the game, you develop new mutations and abilities that let you access new areas by separating into a shoal of worms, smash through barriers or puppet humans to do your bidding. The floaty control scheme does a good job of making you feel as if you are manipulating a wobbly blob yet you never quite feel as if its gelatinous parts are completely in sync with your digits. Perhaps that is the intention. The monster is such a bizarre and otherworldly creation, and the difficulty spikes whenever you begin to encounter tougher enemies who wield flamethrowers or pilot mechs straight out of Metal Slug. For the most part, you will be skulking around shadows trying to find a way out of the maze of laboratories but certain self-contained rooms become battles reminiscent of Smash TV or Geometry Wars, and the resulting melee requires coordination to manoeuvre your multiple limbs that is not always matched by the level of precision that the game provides. This disconnect is disappointing given the intriguing premise and tongue-in-cheek nastiness, more so is the amount of pointless backtracking through many areas that look very similar. This has always been a hallmark of the Metroidvania style yet in Carrion it is not helped by the fact that there is no signposting at all. As a sentient experiment gone wrong, there is nobody to ask for help and no manual to read for directions yet a little more help for the player would have averted so much needless faffing around in the dark – literally and figuratively.

Complaints aside, Carrion has a lot going for it. It has an atmospheric soundtrack, manic action sequences and a dark sense of fun. Like the creature itself, those disparate elements may not entirely gel together but its approach is refreshingly different. Ross Thompson