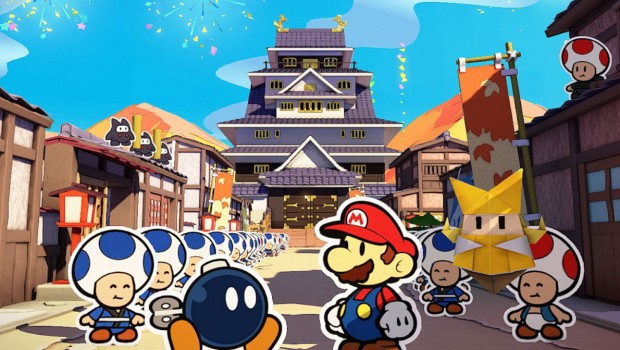 In 1981, an unknown character called Jumpman first appeared in the arcade game Donkey Kong, bounding up a lattice of wonky girders to rescue his girlfriend Pauline from the titular ape. Four years later, the same rotund yet nimble character – now, inexplicably, an Italian plumber named Mario – appeared in Super Mario Bros., still valiantly coming to the aid of his girlfriend, and the rest is gaming history. There are few franchises that can compete with the longevity and universal appeal that Mario has held over the video game industry since its inception, and fewer still that have placed their central character in such a variety of different scenarios and genres. While Mario, with or without the “super” prefix, is most famous for the side-scrolling platformer that made him a household name (mention him and nobody is likely to say, “Sorry, do you mean Mario Puzo. You know, the guy who wrote The Godfather?”) it is interesting to note the various other genres and guises in which he has appeared. Mario has raced karts, appeared in beat-em-ups, invented a time machine… he is a blue collar working class hero who, when he is not clocking in and out of a cement factory, travels through time, space and green water pipes.

One of the most striking ways in which Mario has been reshaped – in all senses of the word – is in the long-running Paper Mario franchise, now in its sixth iteration. The initial appeal of the series is visual, as it resembles an explosion on an arts and crafts stall in a market: all of the planes, platforms, characters and items have been paper cut or drawn with crayons or colouring pencils. Nintendo have experimented with similar concepts before in releases such as Kirby’s Epic Yarn, where all of the avatars were made out of wool and string, yet it is the Paper Mario franchise that does so the most successfully. In The Origami King we have the same hills, pathways, bridges, lakes and palaces that we recognise from other Super Mario games but they have been blended with traditional elements of kamishibai and shoji and the like. The array of dog-eared trees, cardboard stairways and crumpled cellophane lakes is consistently varied, and the combination of 2D and 3D elements lends everything a wonderfully tactile quality that pops from the screen whether you are playing on a television or on the portable version of the console. To lend proceedings yet another dimension, the gag here is that the overworld has been taken over by a new nemesis – the eponymous King replaces traditional enemy Bowser – who has a penchant for folding underlings into new shapes and hiding them all over the shop. Each location is loaded with dozens of Toads who have been slipped down the back of a bookcase or rolled up and stuffed into jars, tree knots and holes in the ground. Finding them all is a delight, not only because it appeals to the collector in every gamer but also because upon being extricated they will respond with a genuinely funny snarky quip.

This riotous, self-referential humour runs through the entirety of The Origami King, most notably Luigi bemoaning his status as the less super brother and the various bars and cafes where koopas unwind. While it is ostensibly a game for younger players, there is plenty that will appeal to parents or older siblings, particularly those who have grown up with Nintendo as an important part of their lives. For example, a long section of the game involves a series of quests with a neurotic bob-omb, whose renaming of amnesia as “thinky thinky panic” works as both a cleverly meta nod to Super Mario Bros. 2 and a succinct description of what it is to suffer anxiety. Furthermore, the way in which this storyline is resolved is surprisingly moving and insightful, which sounds ridiculous until you see it – ahem – unfolding before you. By allowing themselves to break free of the conventions that they created, Nintendo has created a game that defies expectations, and that is incredibly exciting.

While The Origami King has its roots in traditional J-RPGs, which entails a reliance upon turn-based battles, this mechanic has been given a fresh spin in that encounters initially involve solving a puzzle of rings that have to be rotated in order to place baddies in straight lines or groups. It is easy to get used to this approach although it does feel slightly counterintuitive and at times does take the momentum out of just socking goombas with a hammer or jumping on their heads in traditional Mario style. That said, one should remember that this title is aimed at children so it would be churlish to go into it expecting to share the same ferocity and speed as Bloodborne. Also, fights become more varied and frenetic whenever bosses appear, and the rings are now adorned with direction arrows, power-ups and damage boosts. These are not the epic confrontations that you might remember from Final Fantasy and Chrono Trigger, and tend to be over rather quickly. The heart of The Origami King is in exploration. To make each area more interactive, rips and holes have appeared all over the map, revealing the wire frames beneath, and these can be filled in with confetti to open up previously locked areas and hidden rooms. Like all Mario games, this one is coming down with secrets, some of which are obvious, and many of which involve some lateral thinking to locate them. It’s another layer of enjoyment on a game that is already full of charm. Ross Thompson