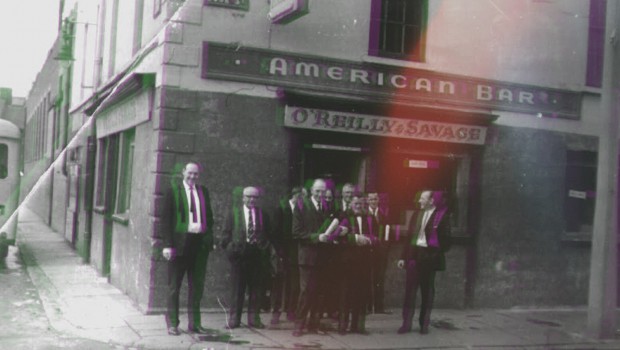 Don’t Go To The American Bar 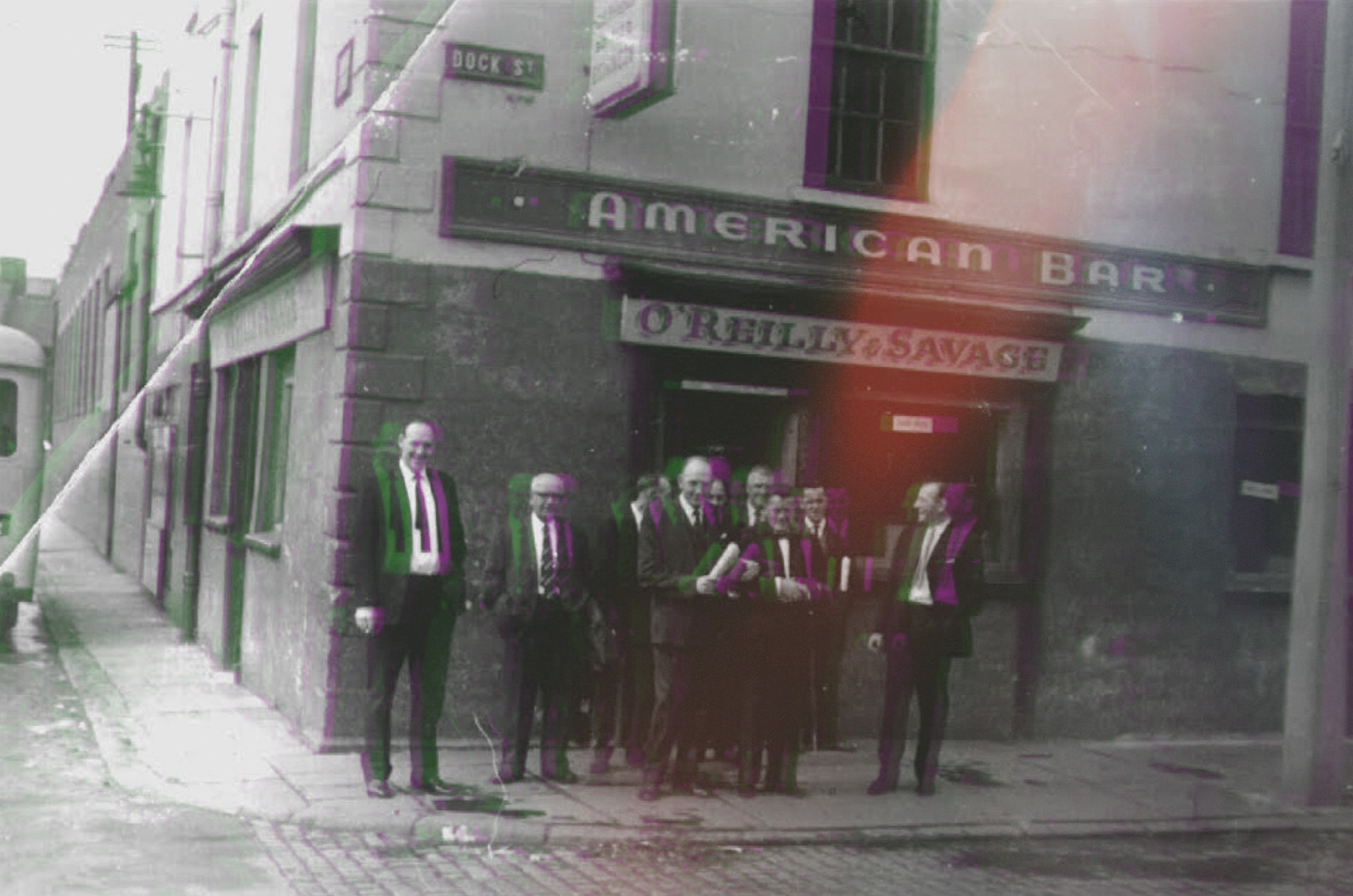 My mate was in the paper a while back, having been thrown out of the Stormont grounds for taking their pet goat on a walk up the hill. Not a euphemism. Or a Michael Stone ‘Performance Art’ piece.

I was in The American Bar in Belfast the other night when some of the staff had just come back from one of those big reach-around business awards, having won ‘The Best Bar’.

The American Bar is the sort of place that would let you bring your pet goat in for a pint. Just don’t let it up on the table, or eat the leather off them seats! Not quite at the level of the alligator that was kept in that pub on the Ballyclare Road in the eighties, but close.

Whilst I was sitting there, with an old friend, I had a real urge to listen to that track ‘The Dolphins’ by Fred Neil. That visual in The Sopranos where Christopher Moltisanti is nodding out, the woozy lighting of the fairground, aeroplanes across the moon, ‘all the times we were running wild’. Sat in this bar that’s been around since the Titanic – in eyesight of where it was built – with someone that has been through it all with me. I needed to hear it.

The actor, Michael Imperioli, did a pretty good NTS show for a bit (he’s really into My Bloody Valentine) and Fred Neil spent the last 30 years of his life working to preserve dolphins. They bare their penises to each other as a male-to-male bonding experience.

Dolphins that is, not Michael Imperioli and Fred Neil.

Abuser of power and unsolicited masturbator, Louis CK, wrote one of the best series about bars in Horace and Pete. I am not a Louis CK apologist. This series describes with the right levels of charm and bleakness, although set in Brooklyn, bar culture in Ireland. As CK financed the filming of it himself, it has this odd, cheap, almost theatre-like quality. The bar, the stage (in the Chelsea Girl staff room there was a big sign on the mirror saying ‘Smile! You’re Onstage!’ before you went on the shop floor). There is a scene where a hip young man comes in and orders a pint. He asks why he is being charged more than the older gent at the end of the bar, accusing Louis CK’s character of being racist.

The reason he charges the fella extra is explained as ‘douche tax’. I always thought that when old working men’s bars are taken over, we all should be charged a douche tax. An extra quid on the drink if you’re wearing engineered garments. I would never let someone like Diane in (Diane in Cheers. Insufferable. Can’t watch it.).

The American Bar succeeds, where others have failed, to maintain a sense of place, without ridiculing the working classes that occupied the space before. It has the sense to add the things you want as a bratty modern consumer. A great tap selection. A decent top shelf. Bartenders that will listen to your absolute rubbish talk. Genuinely excellent food by The Grateful Bread…

There is nowhere in all of Ireland that you can get the quality of that food for that price. All under a tenner. Not the usual Belfast tapas of Salt and Vinegar Tayto mixed with Cheese and Onion Tayto (Grace Dent I aint. Unctuous. Globules. So thirsty!), but really great, continent-spanning small plates and larger bits, sometimes in baps, with chips. If it’s on, get the mussels croquettes. Most of our seafood goes to Spain and Portugal, our oysters to France. I am a seafood Evangelist these days. Brexit has nothing to do with it, we just won’t eat it as a bunch of shovel-carrying, pig-wielding Ulster Planters. Sea Aliens!! Oh No!!!

During The Great Hunger, when the food was sent to the empire and Irish people starved – spuds was it, aye? It’s been said that if thick ol’ Paddy wasn’t so scared by the sea (The Oillipheist has a lot to answer for) and stuffed his starving face with limpets, we would have been alright. I always get the seafood option. If you don’t, they will sell it off to our amigos abroad or use it as an excuse not to fund the NHS. They will start using trawlers and Stena Lines like dodgems in the Irish Sea. Larne is already at it.

Before it became The Sunflower I would on occasion go to The Tavern. It had a great jukebox, a small pool table with a sawn-off pool cue that you had to open the toilet door if your shot was to the top left pocket and for some reason, placemats of Elvis on the wall. The last time I went in there I was chaperoned (LOL) by two men. I ordered a Gin and Tonic and two Guinness. The barman put three pints of Harp on the bar, shrugged and said “that’s what there is”. It was very deep. My pal asked him if he ever had a DJ in, in a kind of half notion to start DJing there himself. The one other fella at the end of the bar turned to him “The last DJ that was in here was shot”.

No more was said about it.

During The Great Covid, some bar and restaurant owners threw their staff under the bus (I was going to write ‘the Boris Bus’ here, but I actually hate myself for even thinking that out loud).

The owner of The American Bar and The Sunflower topped his staff’s wages up to their full amount after furlough and ploughed money into the businesses to make them safer for when they could re-open. They are one of the very few places in hospitality that have kept the same staff for years. It’s really important to be able to recognise the person tending bar. There is a safety in it (especially for a slip of a girl like me teeheehee) that is lost in a lot of the ‘adjective/noun’ bars that occupy the Cathedral Quarter – and the eighteen other quarters of Belfast. Why must you roar ‘Mustang Sally’ at 4pm on a Thursday from the beer garden? Why?

When the smoking ban had just come in I went to see The Stranglers at the old Mandela. I remember hoping that you could smoke in bars again soon, as the heady stench of middle-aged-men guts, after a night on the Tennents, near burned a hole in my septum. Would take the nail polish clean off your fingers.

All of the Cathedral Quarter smells like that now.

I was upstairs in The American Bar helping out with a gig a few weeks ago. Ireland’s best-band-right-now Documenta were supporting Ireland’s best-solo-musician-right-now, Elaine Howley. If you haven’t bought her new record already ‘The Distance Between Heart and Mouth’, then you should change that. It is truly stunning. Not in the way people say ‘stunning’ to try to sell an old mirror on gumtree. It really is a stunning piece of work. Interesting without being punishing or impenetrable. Pop without the saccharine. ‘Song for Mary Black’ is my favourite. The right side of discordance, that gives light and shade. A work of elegance and intellect. She has a lovely big hat.

Nothing has changed there since the much missed The Lifeboat, Rotterdam and Pat’s Bar were open nearby. The same half toilet doors so ‘the boys’ can see if someone is taking drugs over the stall. A freemason-style secret door to an attic space that looks ripe for arms smuggling. The almost imperceptible (to the untrained perfumer) smell of toilet cakes and Guinness drip has a deep olfactory to limbic honk, that in the wild you could only muster by excreting the musky testes of those poor Himalayan Deer. The sound engineer started collecting glasses mid-set and disappeared. The buzz from the new lighting makes it so that if there is any movement onstage the feedback starts up the engines of all the Audi’s in the dealership up the road.

Because The American Bar is a very slightly annoying distance to walk from the City Centre, and the only way to get home at the moment is by flagging down an Amazon Prime driver, it has kept its clientele to be the sort of people that like being in bars, but hate when anyone else is in them.

For the first time ever I cared that someone/somewhere had won an award.

It really is the best bar in Belfast.