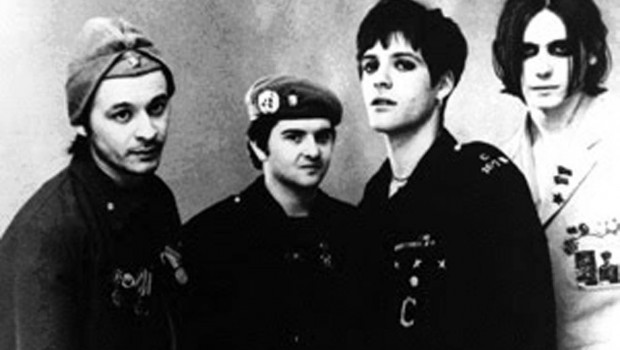 There is no denying that the Manic Street Preachers’ third album, The Holy Bible, is a distressing listen. The album represents some of the final days of Richey James Edwards and gives us an insight into a mind that is as unsettling as it is compelling. Edwards penned songs about self-destruction, societal breakdown and the holocaust with a level of poeticism seldom seen in rock music. This poeticism gives way to terror on more than one occasion and is best typified with the gut-curdling holocaust themed ‘The Intense Humming Of Evil’.

We begin with the sound of clanging metal and gaseous release. We begin to question what the sound may be: the steam whistle on an old train, inscripted iron gates closing slowly behind us, the final moments of far too many people. This sound loops and acts as a sort of curtain call for the show; let that cage slowly come down around you as you’re helplessly taken on a journey through the darkest recesses of man’s soul. With an expertly judged sample, context is set:

“The court has come.
The court of the Nations and into the courtroom will come,
The martyrs of Majdanek and Oswiecim.
From the ditch of Kerch the dead will rise,
They will arise from the graves,
They will arise from flames bringing with them the acrid smoke,
And the deathly odour of scorched and martyred Europe.
And the children they too will come, stern and merciless.
The butchers had no pity on them.
Now the victims will judge the butchers.
Today the tear of the child is the judge.
The grief of the mother is the prosecutor.”

The Manics have an excellent ear for samples, but with this sampled extract from the Nuremberg trials, they outdid themselves. We now know exactly where are and what this entails. The lyrics, fractured and abstract, paint a portrait of people perpetually reminded of their lack of worth as seen through the eyes of a man who had convinced himself of the same thing.

“6 Million screaming souls,
Maybe misery – maybe nothing at all,
Lives that wouldn’t have changed a thing,
Never counted – never mattered – never be.”

The devil is in the detail and Edwards manages to capture the same kind of intensity seen in Resnais’ Night and Fog. His words showcase the unrelenting horror this place and the degradation of those poor souls who are forced to reside therein.

We become witness to genocide, unwilling spectators to atrocity. We’re with these people every step of the way and yet we can do nothing. We promise ourselves that this can’t happen again, but of course, it will:

“Drink it away, every tear is false,
Churchill no different,
Wished the workers bled to a machine.”

Our side may have won the war, but ultimately the same evil that caused this courses through our veins. We’ve gone from helpless spectators to participants. We are the same as the butchers and we shall be judged as such. We’re left with a despondency which is enhanced by the music. Bradfield’s guitar wails atonally like a wounded child, only achieving clarity as Edwards’ painful lyrics lay waste to our psyches. The rhythm section thumps and bangs alongs unendingly with an disquieting consistence. It is the sound of the full train, the boots that crack through bone, the crushing inevitability of the whole situation. As we’re told of Churchill’s true desires though, something happens: we reject. The guitar comes to the forefront and begins to overpower the rhythm section. We can escape. We are the future train drivers and camp guards. We can escape. We are those poor souls entering the chambers. We can escape. The guitar swells and the impossibility of it all fades away. We’re so close… and then we fall.

We gaze upon the horrific visage of who we were, are and will be and we fall. Everything that offered us any form of solace slowly falls out of time and eventually into silence, while that deadly rhythm keeps marching away. The ceaseless beat reminds us of the true horror of this song: we’re in those chambers. Either we’re the one’s breathing it in, or pulling the switch, but we are in those chambers. As we slowly lose all hope and fall into darkness, the curtains closes, we hear that clanging sound one last time, the gas is released and then silence. 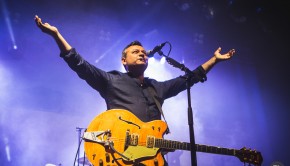 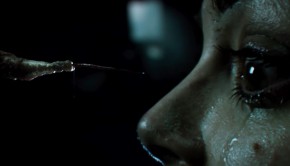