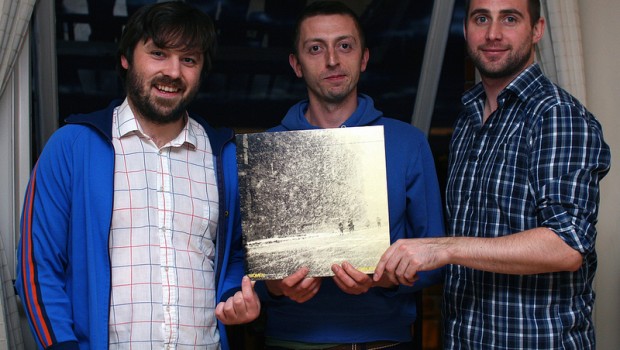 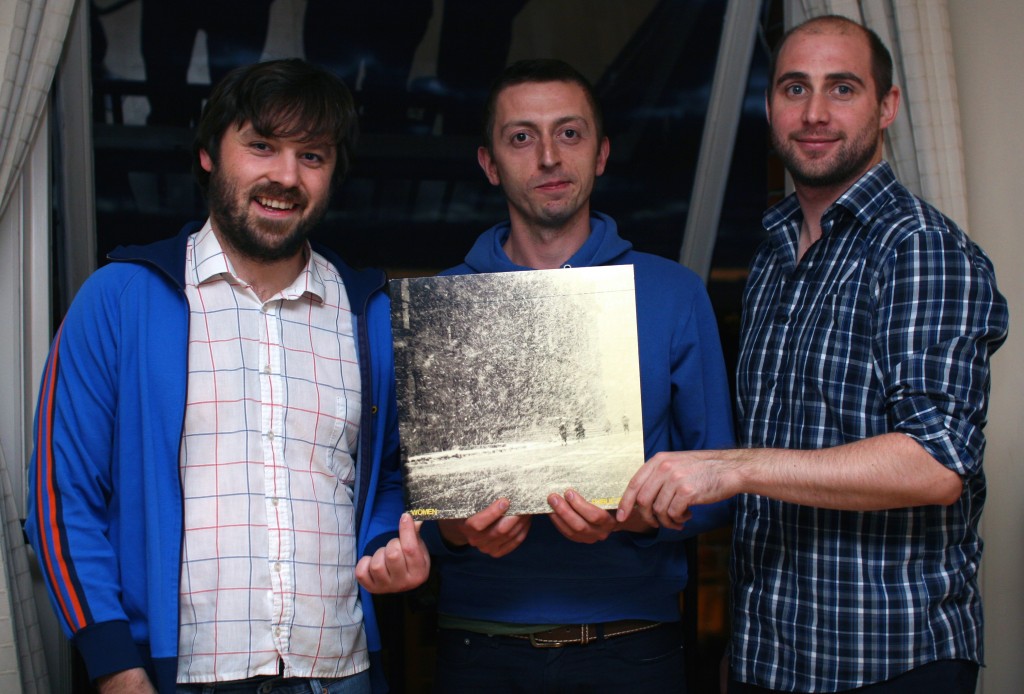 For the latest installment of Track Record, the Crayonsmith lads arrived at my house armed with their favourite records, brownies and plenty of stories of why these albums mean so much to them. All three of them agreed that Public Strain by Women is one of the best albums ever. We chatted about the others over tea and here’s what they had to say:

Ciaran Smith: “This record has everything and is a good example of where our three tastes meet. Amazing lo-fi recording job by Chad Van Gallen and loads of killer hooks. ‘Venice Lockjaw’ has a beautiful, fragile sound and ‘Locust Valley’ is one of the best chord progressions I’ve ever heard.”

Richie O’Reilly: “I got into this band two years ago when their single ‘Black Rice’ was doing the rounds. The debut album was killer but this was a step up again for me in terms of a complete album. Clearly a 90s-style guitar band with a huge love of 60s song-craft and production values. The death of Christopher Reimer is such a tragedy; unbelievable guitarist. RIP.”

Wayne Dunlea: “Probably one of my favourite albums of the past few years. Think I wrote this off for some reason when I saw it first then Ciaran from the band recommended it then I was more sceptical. Still, though, I listened to it, thankfully. Super layered, melodic, discordant stuff. Really, really good tunes – really good. Pretty subtle but very well thought out. I don’t know… a few odours of Sonic Youth and other noisy types but totally their own thing. Unreal – a must-have and all the more special as they had so little output.” 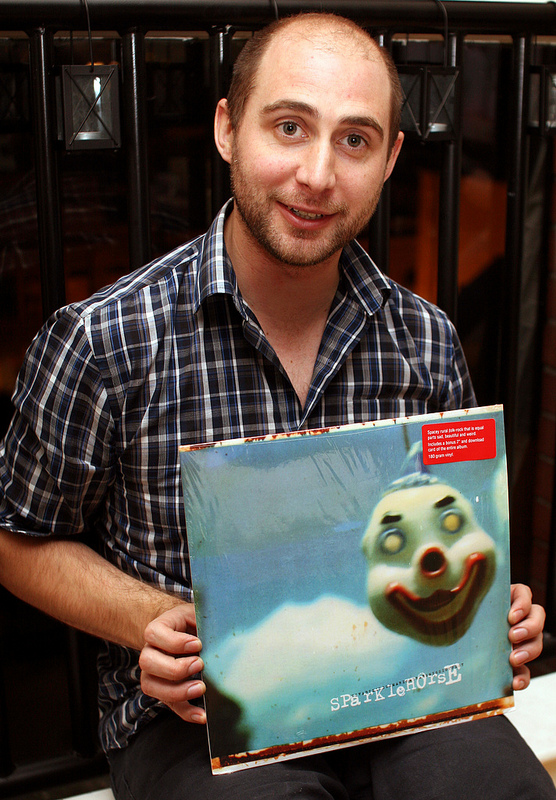 “I came across this record 12 years ago when I spent a summer living in Boston. Here I learned all about songwriting, production, guitar tones, instrumentation and the impact of a closely miced bone dry vocal where the EQ really nails the essence of someone’s voice. ‘Cow’ is one of my all time favourite songs with its Neil Young ‘Out On The Weekend’ bass/drum rhythm track and where the chord progression repeats over and over so the band can (seemingly) play anything over it. Also, I love how the singalong chorus is delayed until halfway through the song. I toured Ireland and the UK with Mark Linkous in 2006 and he told me that it’s based loosely on a traditional Irish song from the 1700s called ‘Cailin Deas Cruite na mBo (A-Pretty-Girl-Milking-Her-Cow)’.” 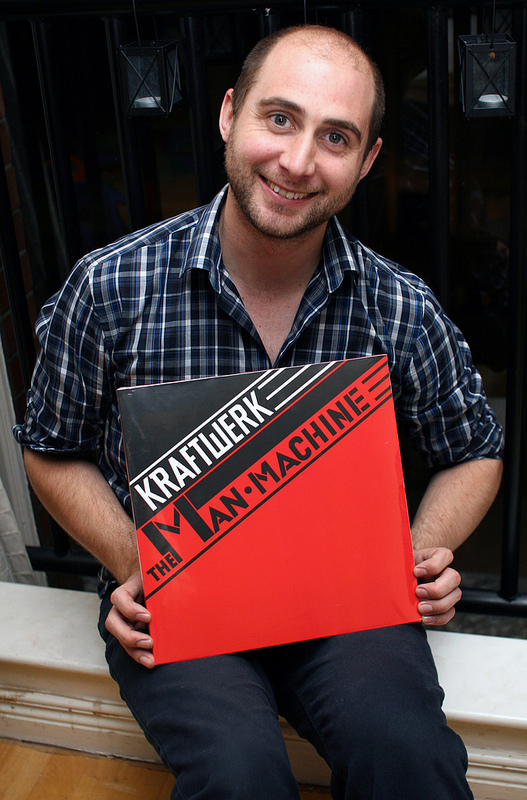 “I’ve been a fan of electronic music from a very early age and when I found this record 10 years ago, I immediately fell in love with its warm, round tones, minimal use of reverb and how every sound is cherry-picked or EQ’d to ensure it has its own place in the mix thus creating lovely space in the mix. ‘Spacelab’ is one of my favourite songs on this record.” 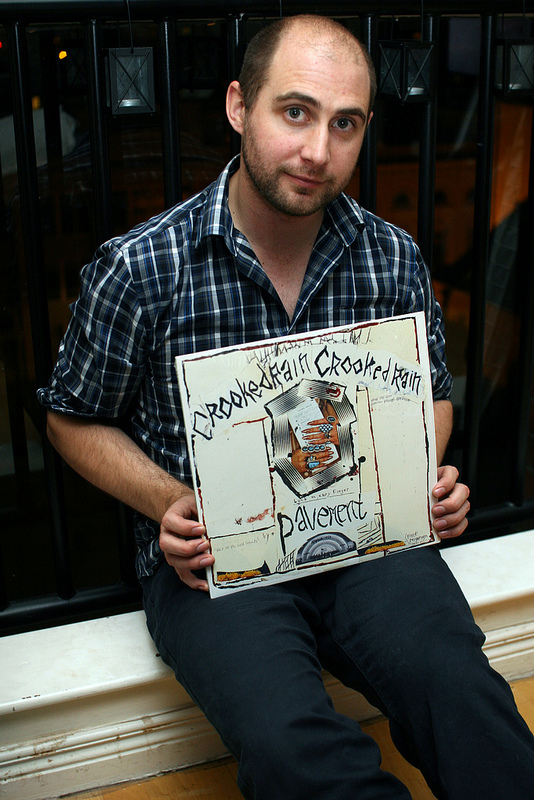 “Again, I discovered this in the summer I spent in Boston. I love the telecaster tones, the melodies, the dry vocals and the emotion that can be conveyed in a less than perfect vocal take. Regarding guitar, when you find an amazing tone, it can lead one towards adopting a simplicity of execution in the playing. The lead guitar in the instrumental part in ‘Stop Breathin’ after the singing has stopped is a fine example of this.”

The Dismemberment Plan –  Emergency & I 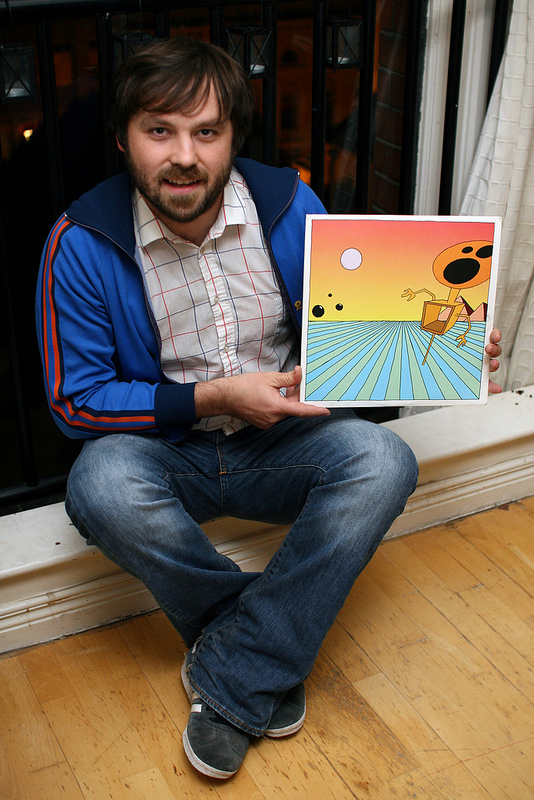 “I got this album around about when I moved out of home for the first time and it will always remind me of that period. It captures that sort of excitement, agitation and loneliness so well. It’s also something that works just as well at a midweek party as it does drowning your sorrows, home alone when everyone else has gone back down the country for the weekend. I listened to it round the clock but still never tire of it. Lyrically I can’t think of a better album. The other thing I love about them is how difficult it is to pin down their influences. After a fair few listens you can start to tick off some references; British new wave, DC punk, Brainiac and spazz-core, early 90s hip-hop, Talking Heads, Foo Fighters but even all that doesn’t cover the whole lot. It takes a band pretty confident in their ability to try things and comfortable with the push and pull of each individual member to pull that off. I always admired that.” 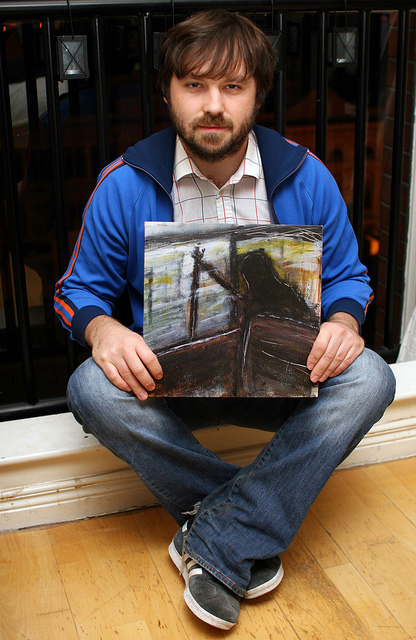 “If the Dismemberment Plan album is that feeling of being alone at the epicentre of the universe this is the total opposite. It feels really warm and pastoral or maybe that’s just the title being all Freudian with me. I don’t listen to a lot of post-rock or instrumental music these days, I sort of OD’d on the stuff in college, but I do keep coming back to Do Make Say Think. I think one of the reasons is that while they’re incredible musicians there’s nothing showy or gimmicky about them. They don’t resort to cheap effects or lazy crescendos, they understand dynamics and ebb and flow much better than their peers. They keep the listener guessing but the changes are never forced, wilful or difficult. I have a friend who says it’s 10 times harder to write a happy song as it is a sad song. And I tend to agree with that. It’s so hard not to be cheesy, schmaltzy or safe but these guys do joy so well. Generous would be a good word for it. The slide guitar at the end of “Hooray! Hooray! Hooray!” is one of the most blissed out codas of all time. They’re also ludicrously nice lads. I was called backstage after a gig of theirs in Whelan’s one time to remove a friend who had stolen all their whiskey, “a gift from their record label”. They were apologizing for having to eject him and just told me to make sure he got home alright. So Canadian.” 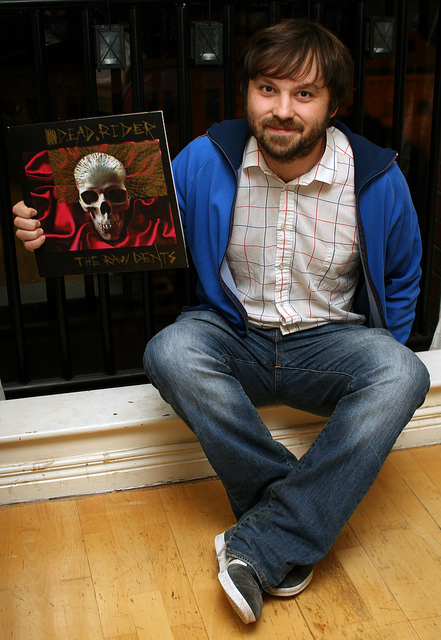 “This is my current pick, I suppose. It came out in 2011 but only cottoned onto them last year. It’s like a really sleazy, falsetto-singing Tom Waits backed by a synth and sax-heavy math rock band. They’re from Chicago or thereabouts. Another bunch who, when you see them, look like the shouldn’t belong in a group together at all and that’s probably part of their charm and what makes them so interesting. Two auld lads, a guy and a girl. The drumming is absolutely sick and is central to everything they do. It’s the dude from Joan of Arc I think. A nice dark, unsettling listen. Perfect for anyone having relationship troubles over Halloween.”

Manitoba – Up In Flames 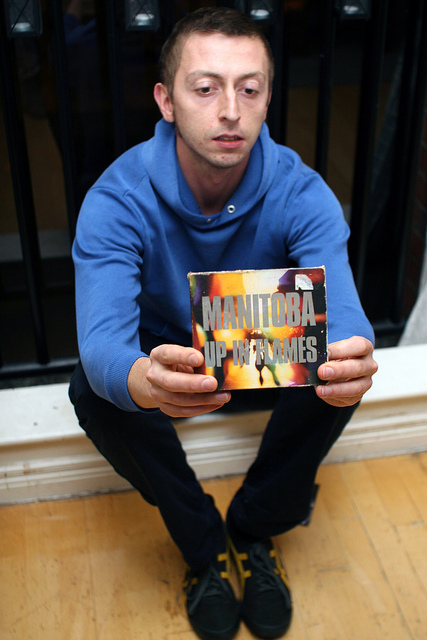 “I saw Manitoba live years ago for the first time in the C.A.T club (Cork Arts Theatre). It was class. I was young enough -probably 19 or 20 – and the venue was a bit of a bit rough around the edges but a great room – I think I fell down the stairs. They had masks on and two drummers -and the tunes were unreal. I think the lads from Plugd were involved in putting it on. I’ve seen them/Caribou loads since. It was in the heyday of No Disco and Warp and all that jazz – the good old days. I picked up the album not long after in Plugd and probably didn’t appreciate or get it as much then as I do now but have been throwing it on ever since. Kind of pyschy – couldn’t pin it down. I think of kaleidoscopes whenever I listen to it but that might be the artwork. Killer tunes though. He then changed his name to Caribou and released Andorra – another stone cold classic. I still throw on Up in Flames on regularly – sounds as interesting now as it did back then.” 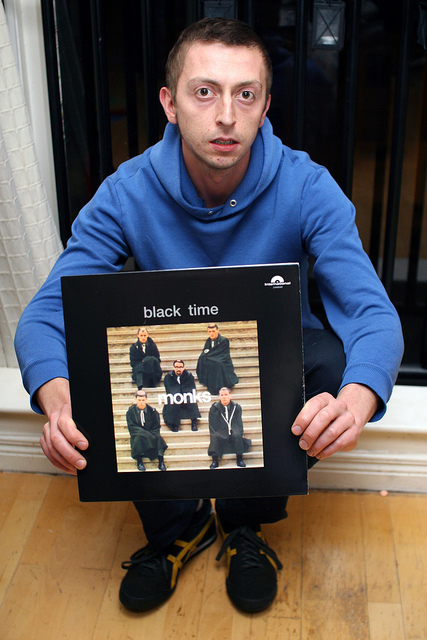 “I think I heard The Monks for the first time through Niall Heffernan from Ping Pong in Cork a couple of years back – he was a proper evangelist of theirs. Again, I didn’t know what to make of it when I heard it first, then someone said it was from the 60s. Mad, energetic, vital shit. You believe everything they’re singing. Really raw, distorted banjo … distorted other shit… unbelievable. The footage from them on TV in Germany and all back in the day is sweet. Totally genuine to my eyes and ears and way before their time. Everyone should hear them.”