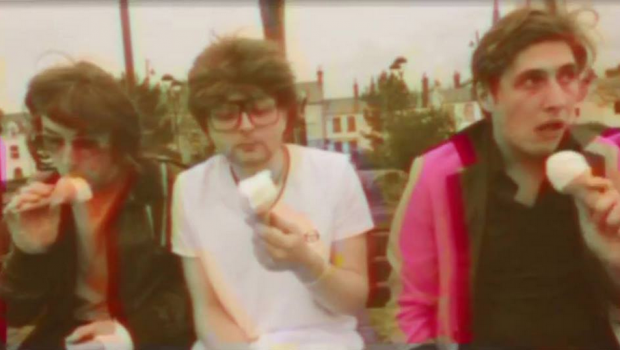 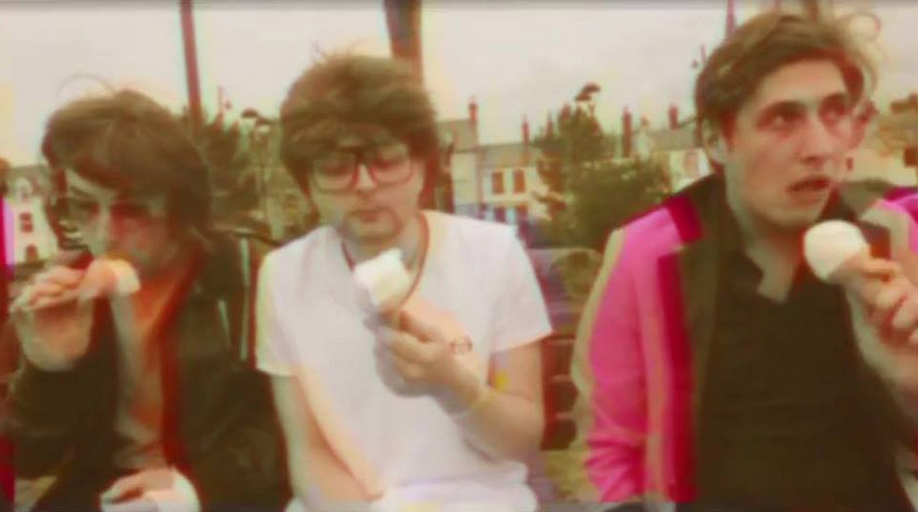 In the very first installment of Frame By Frame – a brand new feature looking at the production of music videos by all kinds of  Irish bands and artists – Colm Laverty talks to Ryan Burrowes and Mark Finnegan from Northern Irish alt-rock trio Abandcalledboy about their recent, wonderfully retro tribute to the Peter Pan of pop, Cliff Richard.

>Hi guys. First off, tell us a little bit about each of your roles on this music video.

Mark (Finnegan, bass): I did a lot of the pre-production (storyboarding, set pieces, locations), it’s something I have a bit of experience in, but not on this scale. I was the guy in constant contact with our friend Odhrain, he was involved in the more technical aspects of the video and helped flesh out our ideas. My sister also helped me create the fashionable outfits you see us wearing, we went totally Gok Wan on those.

Ryan (vocals/drums): I dressed up as ‘tennis’ cliff. And looking back at my fine pale white legs … I should have picked a character with trousers.

In a sentence, what sets ‘Cliff Richard’ apart from other music videos (in particular, those from Northern Ireland)?

Ryan: The weird feeling you get when something seems happy but you realise it’s not.

Mark: Light relief in a market crowded with a lot of brooding anger. We just aren’t angry people.

How was the project conceived?

Ryan: Most likely in the van on the way to a show coming up with ridiculous comedy sketch ideas, something we do a lot. Most people probably wouldn’t even find half of them funny, we have a weird sense of humour. We knew we didn’t want a serious music video or necessarily a strong ‘narrative’. We wanted a video that left the viewer with no idea what was going on, but still laughing.

Mark: We actually just sat and watched so many Cliff videos and interviews that we ended up becoming really interested in him and his music. We also read up on him a lot. Admittedly, to begin with, we had the idea of Cliff not being a real person and there was a storyline to that effect. But as the concept progressed, we realised we didn’t want to take the piss out of him – too much.

The video is notable for its DIY production; was it a conscious decision to produce it yourselves?

Ryan: Very much a conscious decision, not just because we just had no money but also because we see things like videos/artwork as other pretty cool creative outlets for a band as well as making music. So we enjoy having full control of those areas. Of course things take longer to happen and it’s a lot of hard work, but it’s totally worth it. We realised how you can make really creative things even if you have very little when doing our last video for ‘Seize The Chair’ (below). We didn’t even have a real camera for that one – we must be moving up in the world!

Mark: Absolutely! It’s a trend we have in everything we do. We are all very creative people and love getting our ideas to each other. We frantically bounce ideas for things off one another all the time and then call up the people we’ve met while touring or at parties etc., and get them on board to help. We randomly met Odhrain at one of our shows.

Ryan: It was just the band and Odhrain, who is a legend for putting in so much work.

Mark: Odhrain and us – that was it. The pre-production was so enshrined in all four of us that the days of shooting turned out to be pure fun, filming pure fun.

When and where did the shoot take place?

Ryan: Two shoots: one in Warrenpoint on a cold, wet weekday and one in Newry Arts Centre, who they kindly let us have use of the theatre for two hours one morning while no one was using it. So thanks to them for that.

Mark: It was one of the coldest days in November in the Warrenpoint-Rostrevor area. We wanted sleepy retirement seaside town vibe, like somewhere you could imagine seeing Cliff strolling along now.

Ryan: Cliff Richard videos were obviously a pretty huge influence. They’re funny without meaning to be. But loads of the imagery is influenced by Andy Kaufman and Vic Reeves/Bob Mortimer sketches (Shooting Stars, Fosters ads etc), who are big heroes of mine. We’re big into surrealism and comedy, if it’s funny and you don’t really understand why, I’ll love it.

Mark: Vic & Bob and The Mighty Boosh influence most things in my life.

You mention that you watched a lot of Cliff Richard music videos in preparation for the video – are there any hidden jokes or references to Cliff that we may have missed?

Ryan: There’s quite a few references to his innocence maybe.

Mark: Not hidden as such, but if you watch the ‘Wired For Sound’ and ‘We Don’t Talk Anymore’ (below) videos, you’ll see what we were doing right away. That’s my favourite era of Cliff.

Ryan: To be honest I think we got total freedom. What you see is something we’re very happy with. Odhrain was amazing and took all our ideas for editing on board. We probably wouldn’t have released it if there were some elements we didn’t like. We can be quite picky.

Mark: I don’t think we needed to compromise or were willing too to be honest, we loved the idea that we created and there wasn’t really any other way we felt we would be happy to go with it.

There’s quite an authentic ‘chewed-up videotape’ element to the video. Tell us a little bit about the editing process.

Odhrain: During the edit we watched a lot of old Cliff Richard music videos as well as other artists from around the 70’s and 80’s,  which strongly affected the look of the video. A lot of those videos had degraded with age so we worked on mimicking a lot of that damage to make this video as authentic as we could. The main thing we worked on was getting the colours right, we had to try and remove a lot of contrast and make the colours appear duller and muddied. Once we achieved the look, we brought the footage into After Effects where we added the rolling VHS scratches and made the colours bleed using a lot of effects in ways that they were probably never intended to be used.

How well do you feel the video reflects the themes and concepts behind the track?

Ryan: The whole video is a play on the innocence and naivety that comes with the “Cliff Richard” character, so I think we nailed it.

Has this affected the way you now perceive your own music?

Mark: I’ve started to examine the lyrics more and try and decipher them myself rather than asking Ryan.

Ryan: Made me realise how bizarre some of our lyrical themes are. It never really occurred to me until listening to the song loads for the video.

How was your experience performing on camera?

Ryan: I loved it. It takes quite a lot to embarrass me so I’m pretty much up for anything. Of course I was down-playing my dancing to match Cliff’s level, I have fine moves on the dance floor…

Mark: I feel Liza Minnelli was channelling through me that day.

Did you already own the costumes and rollerskates? Perhaps the pink blazer will make a live appearance someday?

Mark: We did a bit of second hand shopping and went full on Neil Buchanan on them. I rented the skates from Kellys Roller Skating in Belfast.

Ryan: I bought loads of mine on eBay and just hoped it would look good.

Mark: You can see the technical bar being raised due to the influx of film/media based courses in colleges. I think bands are starting to come out of their shells and aren’t afraid do some acting rather than just standing with instruments.

Mark:  We love technology. Making a video is so easy today – we did our last video all on our phones. If you know someone with a half decent camera and a half decent eye in their head, get them to shoot your video then edit it in your bedroom. It’s that easy.

Odhrain: Technology has become so advanced, but also affordable over the last several years which has opened up a huge amount of freedom to artists. Bands can now produce professional quality videos on tiny budgets. Almost everybody has a HD camera in their phone now, so music videos can be created anywhere at any time. It gives a huge amount of freedom for bands to create their own videos that they feel work for their music.

Ryan: I loved that recent Blue Whale one for their single ‘Was’ (above). It’s really trippy.

Mark – For me it’s the Axis Of video for ‘We Dine On Seeds’. It’s one of the best representations I’ve seen of capturing the band’s live energy

Finally, what would be your nomination for the greatest music video of all time?

Ryan: ‘Windowlicker’ by Aphex Twin (below).

Mark: ‘Coffee and TV’ by Blur.