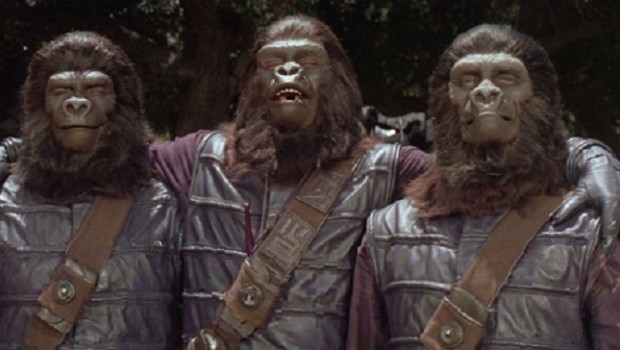 It was the beginning of the comedown after the Summer of Love. 1967 had been a remarkable year, where pop culture had truly broken down the barriers, becoming perhaps the most important part of most young people’s lives. Inevitably, the year that followed took on a darker hue, and it was only a matter of time before someone would capture the fear and paranoia that had slowly crept into youth culture. And unbelievably, this dread was perfectly encapsulated in the unforgettable image of a bare-chested man on his knees, pounding his fists into a sandy beach, whilst the waves indifferently rolled on past him. It was the beginning of a new era, and people were ready to go ape.After all these years, the final scene of Planet of the Apes hasn’t lost its power to shock. Charlton Heston, in perhaps his greatest performance as disgruntled, jaded astronaut Taylor, perfectly epitomises the encroaching cynicism of the younger generation, an attitude that would soon be manifested in the countercultural masterpiece Easy Rider. This is a man who has become so tired of his fellow humans that he’d happily sit back and smoke cigars, knowing that he’s outlived them all. As the hippie dream began to wither, astronaut Taylor stands as a powerful avatar.But there’s so much more to the movie than that iconic final scene. In 1968, science fiction still meant rubber monsters and silly, spooky electronic music. It was a genre for kids, and as such, depended on your age being low enough for you to be entertained by a plastic rocket, dangling from a string. Planet of the Apes was different, though. Taking a big gamble, 20th Century Fox produced a film that wore its intelligence very firmly on its sleeve, a film that was unabashedly for adults, rather than for popcorn guzzling children. This is a movie where some deep philosophical questions are raised, where spirituality is tackled head-on, and where there are no easy answers. For its time, the special effects were remarkable, a cast of actors clad in heavy prosthetics, but conveying their personalities largely through movement. They looked pretty good, sure, but the real magic was in the way they moved and interacted with each other. Lead apes, Roddy McDowall as Cornelius, and Kim Hunter as Zira, were utterly convincing in the role, shuffling around with a simian gait, bursting with personality. Set against Heston’s performance as the bewildered Taylor, they’re positively human.For a bumper action sci-fi movie, Apes is heavy on dialogue, and relatively slim on exciting derring-do. But such is the forcefulness and style of the movie that this hardly seems to matter, the action sequences positively exploding with a violent danger, staying in the mind long after the film has ended. As Paris erupted into violent protest, with the Berkley campus in San Francisco soon to do the same, these images of an innocent man being persecuted by the mob, imprisoned, and tortured would have a heavy resonance with audiences, left in no doubt that there was more going on than meets the eye. The Vietnam War was continuing to escalate, and the crippling, inescapable fear of The Bomb that runs through almost every scene in the movie is impossible to ignore.The whole movie is shrouded in Jerry Goldsmith’s incredible score. Eschewing the more conventional style he’d previously been known for, Goldsmith’s Ape music is full of clanging dissonance, percussive sounds, and washes of noise. Unashamedly avant-garde, the music plays a distinct role in the film, capturing the sense of dislocation both Taylor, and we as the viewer feel. If Apes has a ‘theme’, it is one of revelation, and it is soundtracked perfectly by Goldsmith.The movie was a massive hit, and spawned an incredible four sequels (some good, some bad) and a television series, before the public moved on to other things. Tim Burton tried his hand at resurrecting it in the late 90s, with disastrous results, before Rise of the Planet of the Apes brought the series kicking and screaming into the modern age. The new movies share the balance of intellectualism and violence, and stand as a lesson in how to re-invigorate a franchise, without tarnishing the memory of the original. But regardless of how well they are received, they can never hope to capture the awesome shock of that bare-chested man, slamming his fists into a sandy beach, whilst the waves indifferently roll over him. Steven Rainey

Dawn of the Planet of the Apes is showing in cinemas nationwide. Read Conor Smyth’s review of it here. 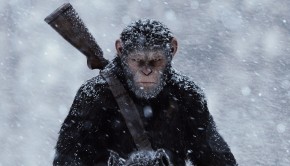 War for the Planet of the Apes →