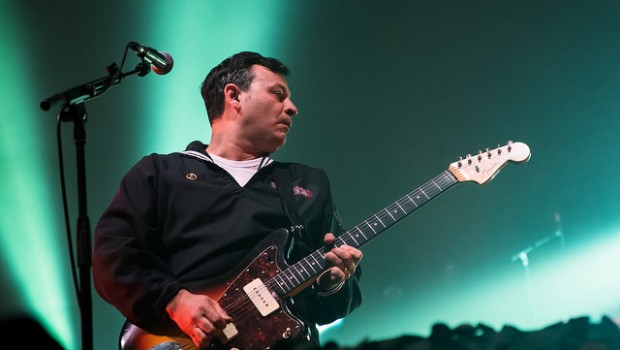 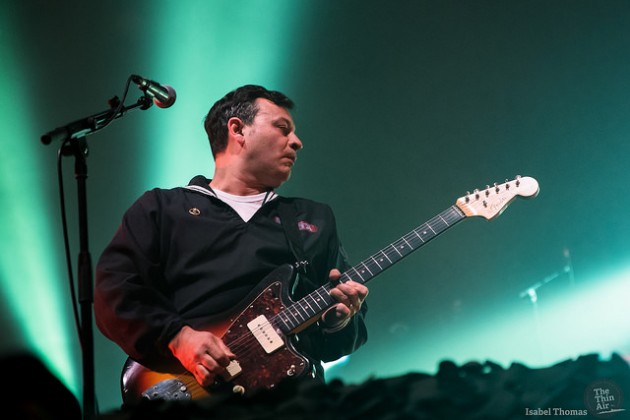 You sometimes have to wonder if people do these “Let’s play the album everyone likes” shows in order to destroy the album. If you’ve made one truly significant album in your lifetime, fair deuce to you, but after a while it must feel like a noose. If you were to do such a show, how would you do it? Could you do it in such a way that puts this awful beauty that hangs over you to rest, while not screwing over the people who’ve connected themselves to the record and provided the opportunity for you to perform this show? In 1994, the Manic Street Preachers released their seminal work, The Holy Bible. Within the year, their lyricist and de facto leader, Richard James Edwards, would disappear. Every subsequent album has been compared to that 1994 effort, directly or indirectly and normally derisively. It’s been twenty years, nearly to the day, that Edwards disappeared and with their recent run of shows, including tonight’s show in Olympia Theatre, the band seem to have something to put to rest.

The Olympia Theatre is packed tonight. There is a barrage of Manics memorabilia from buttons to both well worn and brand new tees and even military berets. A chunk of the audience will slip out once the Holy Bible hour is over, many more will stay for the greatest hits. At 8:45pm, a remix of the album’s lead single ‘Faster’ comes blaring over the P.A.. Thick plumes of white smoke fill the stage and merge with the lights creating a visual not dissimilar to a My Bloody Valentine album cover. We’re about to go through the hazy wave of nostalgia and revisit one of the bleakest records ever record. As we go back, we all chant furiously a mantra: “So damn easy to cave in/man kills everything”. By the song’s end, the smoke has dissipated and three men in their forties walk on stage. The trio position themselves with singer James Dean Bradfield front and centre, drummer Sean Moore in back and bassist Nicky Wire to the right. The left side of the stage is empty. That space belongs to Edwards. They stand in what look like ill-fitting costumes from a past life. Bradfield is dressed in his sailor gear, Moore in his khaki shirt and Wire looking ready for battle. They’ve been here before, but it’s been a very long time. There no smiles or acknowledgements to the audience. They’re here to let the Bible out – nothing more nothing less. 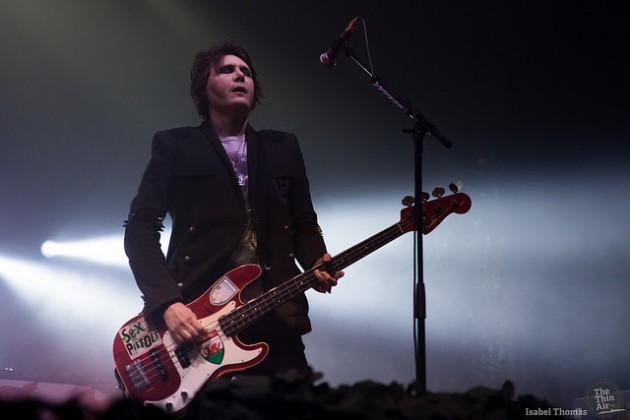 With little notice, the sample that opens the record is heard blasting out: “You can buy her, you can buy her. This one’s here, this one’s here, this one’s here and this one’s here. Everything’s for sale.”. Then ‘Yes’ begins. It sounds incredible. It sounds like the record, but more intense. Those riffs could still break glass and those words – so volatile – still feel like a punch in the gut. The drums are given an extra weight in the mix, giving the music the correct level of post-punk. The crowd is howling. They know every word and when Bradfield can’t sing they carry on for him. It’s a beautiful performance meticulously practiced and honed, but there is absence in the sound. We run the album chronologically and the band knock out every single track with ‘Ifwhiteamericatoldthetruthforonedayit’sworldwouldfallapart’ being a particular stand-out. But something is amiss and it isn’t until the  ‘Archives of Pain” that it really becomes apparent. At first everything seems to be alright: Wire’s bass is apocalyptically deep while Bradfield’s guitar could strip paint it’s so harsh. But there’s no rhythm guitar, there is this gaping hole in the sound where Edward’s limited guitar skills would be. The band don’t even seem to notice, let alone care. They seem to be playing as those he’s in the room with them. We no longer feel Edwards presence in the songs, but rather his very pointed absence. It’s here that we realise that this isn’t just a simple cash grab, flog the album that people like show: it’s a mausoleum. 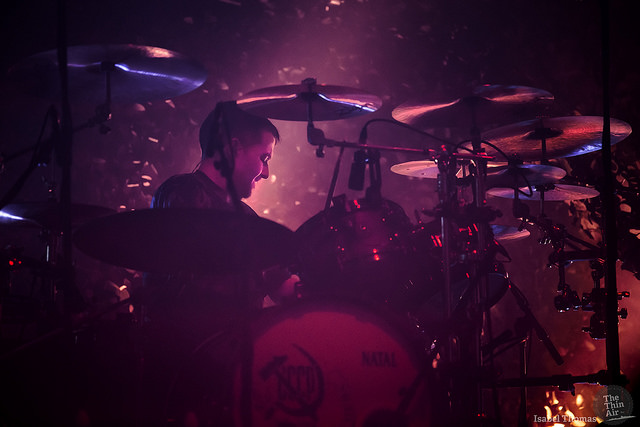 The band are encased in this statis. They’re stuck in 1994 in ill fitting clothes, re=experiencing some of the most genuinely upsetting lyrics ever recorded constantly. They seem to be some kind of a bar band on the end of town replaying the same songs night after night like some kind of nihilistic groundhog day. This is who the Manics could have been had circumstances been different, had there been no ‘Design For Life’, had they folded in 1995. This is the Pixies, Neutral Milk Hotel and The Feelies. They’re almost like some kind of museum exhibition; unfeeling, unemotive, locked. After this moment the first half of the show takes on a whole new meaning. With this show the band are providing a complete testament as to what that album sounds live in it’s entirety, so they can finally move past it. They can still dip back and take the songs that fit with whatever they’d like to say in the future, but now there is a single, undeniable document that this what 1994 sounded like. This was The Holy Bible.

Thankfully they knock every other track out of the park. ‘Revol’ creates a frantic boogy, while ‘Mausoleum’ and ‘Die In The Summertime’ provide an escape for all of the pent up rage that the crowd have been holding in. ‘Faster’ feels like a freight train being driven by the Giant Haystacks directly into your front lobe and ‘This is Yesterday’ is legitimately beautiful. We then get to the album’s Loftcraftian leviathan, the darkest recess that the Bible has to offer: ‘The Intense Humming Of Evil’. With it’s rhythmic flashing lights blinding and disorientating, while the music batters with the unrelenting and absolute truth that we, as a species, have committed unremittingly awful sins that can never be forgiven. The strength of this performance alone is enough to justify the evening; the rest of the album has just been a delicious bonus. When the last drum beats fade, Wire takes the mic and addresses the crowd. He offers a sincere and heartfelt eulogy to Edwards and thanks us all for being here. This would just be a simple goodbye were it not for the next song. On ‘PCP’ the band come alive. It doesn’t fit with the rest of the show thus far: if they’ve been sitting on all of this energy then why wait so long to let it out? Maybe it was to make sure that emotion didn’t get in the way of the songs. That they should just let the songs exist with no superfluity and that with ‘PCP’, a song which always sat somewhat curiously in the album’s tracklisting, they’re finally able to put the album to rest and move on. A ghost is laid to rest. The band exits sharpish and the crowd is awash with approval; above all else, we seemed to have gotten what we wanted. 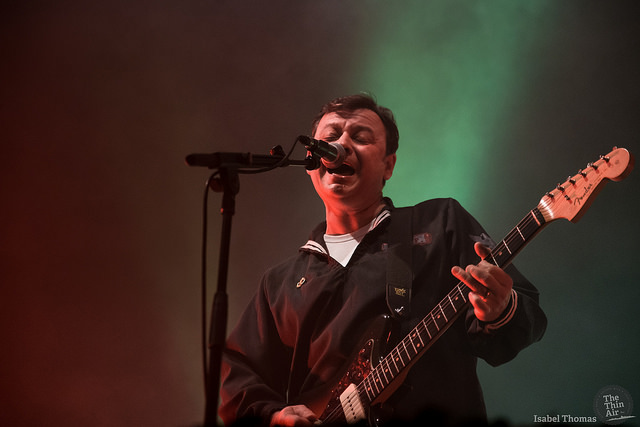 Bradfield walks out after a few minutes, picks up an acoustic guitar and begins to play a strange, not quite Christmas dittie, 2013’s ‘Sullen Welsh Heart’. It’s beautiful and haunting and Bradfield seems like a man reborn anew. His sailor suit has been replaced with a fresh blazer and white shirt. The rest of the band soon follow with the same feeling emanating from them; their outfits belong their age, there are smiles and that empty corner of the stage has now been filled by touring guitarist Wayne Murray. We’re back in 2014 and now that the Bible has been closed, the band can make an argument as to why they’re still one of the most vital rock bands working today. Much like the first half of the show, everything just seems to work. Tracks like ‘Motorcycle Emptiness’, ‘If You Tolerate This’ and ‘A Design For Life’ have not lost a modicum of their original power while newer songs from this year’s Futurology album like ‘Dreaming of A City’, ‘Europa Geht Durch Mich’ and ‘Walk Me To The Bridge’ make a very convincing argument that the band have got a lot more juice left in them. A personal highlight of night is the inclusion of 2010’s ‘Postcards From A Young’ which gets the majority of the fists in the room clenched and raised in the air. Every track hits the mark with the exception of ‘Virgin Youth’, which suffers due to poor mixing and Wire’s limited vocal range. The performances here are much more physical than that of the first half. If that was about preservation, disconnection and isolation; then this is about connection, energy and what Craig Finn calls the “positive rage”.

The night ends in typical Manics fashion with a rousing performance of ‘A Design For Life’, which seems to leave everyone in the room breathless. With this run of shows the Manics seem to have done something very special. In giving the Bible its airing, they’ve allowed everyone in the room a chance to experience it in as pure a manner as they can possibly muster without voodoo magic, while also making a pretty convincing argument that it’s finally time to let the album go. An entombment has never been so enjoyable. Will Murphy

Check out Isabel Thomas’ full photo set from the show below.