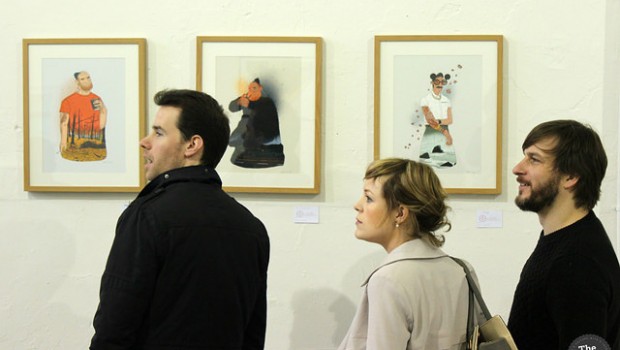 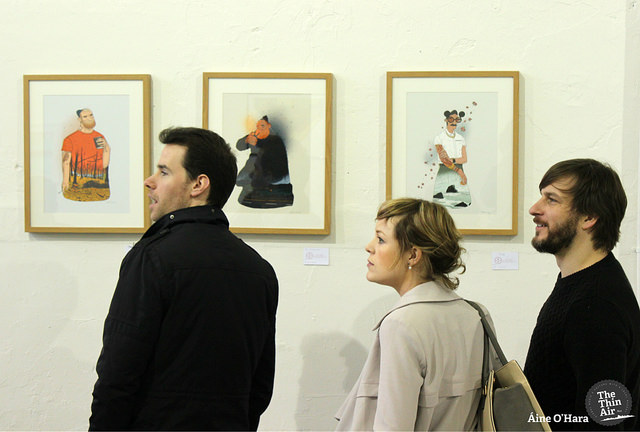 In the latest installment of Primer, Eoghain Meakin takes a look at Burn After Inking, an exhibition of illustrations and paintings from Gavin Fullerton, Christina O’Donovan, Melissa Malone, Patrick Semple, Fiona Meade and Daniel Spencer at Dublin’s The Mart. Photos by Aine O’Hara

MART continues to shine as one of the city’s premier, not-for-profit creative spaces. Spread out over the venues two main rooms this eclectic mix of styles and ambitions are linked by the fact that they could all find a home in story books from Beatrix Potter to the positively post-modern.

Reading the room like a text, from left to right, the opener is Gavin Fullerton‘s musings in brown. His work is clean and polished even when dabbling in charcoal tones. There’s an allure in this kind of physical flatness that can somehow convey emotional depth, and Fullerton’s sparseness is a perfect conveyor of the fact. Inspiration seems to range from loneliness to video game Portal but the artist’s simplicity is the allure.

Luckily the highlight of the show is Patrick Semple‘s post-pop cartoons which are reminiscent of heavyweights like Crumb, Chomet and Moebius all at once. Perhaps there’s an argument that this is technique over response but, hey, welcome to contemporary art. Couple stands out as an exposition of all his best bits and The Fisherman‘s dark, brooding palette makes it the most moving of the set.   Offbeat portraits, the characters literally embody the worlds that they live in and this concave lens is well achieved. 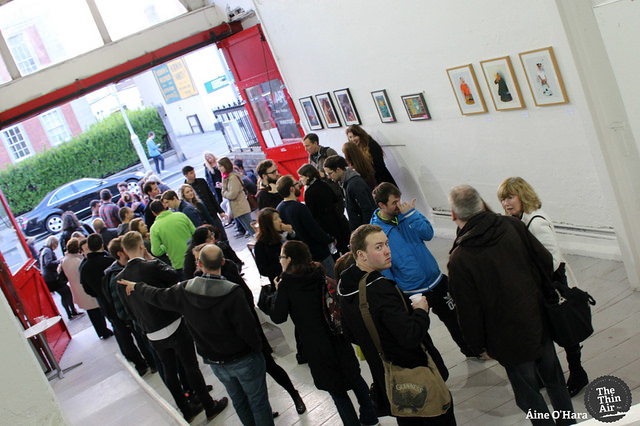 While Semple’s work is most definitely a set Melissa Malone‘s four disparate pictures are linked only by their digital manufacturing. Well conceived and finished, they do however look like sketches for larger projects. Portfolio pieces rather than art. However, the exposition of lighting in Apartment 2 is sublime and this skill is further complimented in Coumshinaugh.

Commercialism may not be contrary to artistic credibility but when it comes to animals it usually is. Christina O’Donovan‘s pictures are extremely well crafted, there only flaw being that they’ve been put in frames and up on a wall. The illustrations are rich in heritage and tradition but for those who look to art to be challenged O’Donovan’s beatific pictures may just be a little twee.

Somewhat in contrast is Daniel Spencer‘s polygonal, trance-esque animal pieces that could be sketches for an amphetamine inspired star chart. I Wish That We Were Magic is an interesting, winsome showcase for his digital-origami style.

The whole show is full of lively, playful illustrations, all extremely reasonably priced. Aesthetically this could hardly be better. Like all digital art majorities there’s a case of construction over concept but that’s an argument outside of the semi-professional art scene. Clearly there is talent here and style with that. Running until this Sunday 19th of April and open from 1pm – 6.30pm this is a must for all those with a nagging gap on their wall. Eoghain Meakin 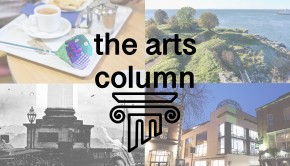 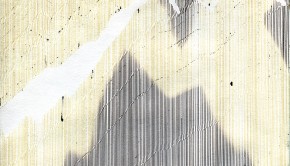