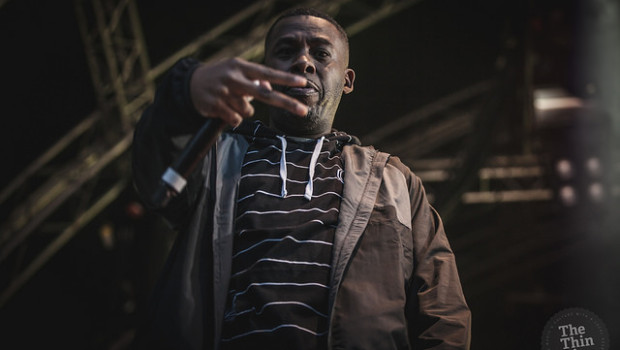 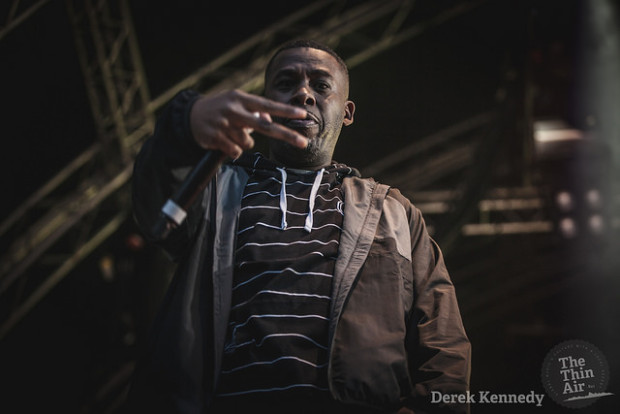 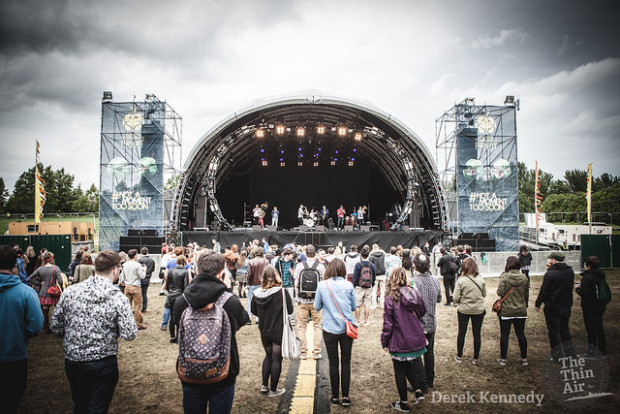 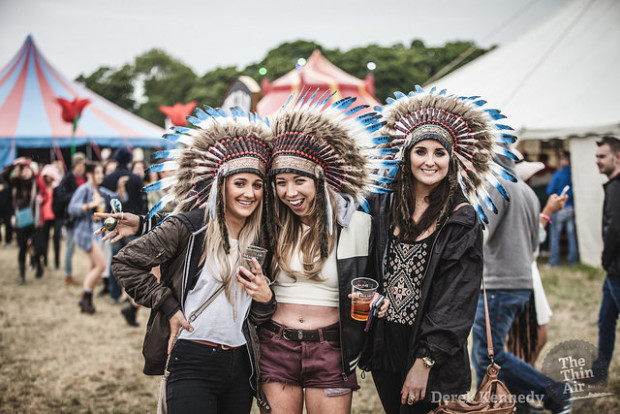 The pristine fields are suddenly swamps, the sauntering revellers now screeching for shelter; those carefully picked outfits exposed for the vanity items they are, makeup streaked, perfectly quaffed bed-head hair plastered to their owners faces.

Yet an Irish festival goer not ready for a little rain is a fool indeed and though the crowds entering may seem a little put out, once in the party proper the atmosphere visibly lifts. In the Undergrowth Stage 4ward Grad is laying down some beats for the early peakers. The atmosphere is positively Hacienda all the way down to the bucket hats and with the grey, rain streaked sky it’s a little hard to know if this is three in the am or pm.

The string work of the Trinity Orchestra (below) over on the Main Stage is bludgeoned by a full face slap of bass fuzz as Dublin trio Sleep Thieves kick into their set. Midday on a now bright and blustery Sunday may not be the best time for their dark synth experimentation but with the bands Blade Runner chords and Sorcha’s hovering vocals they still manage to hit their mark. 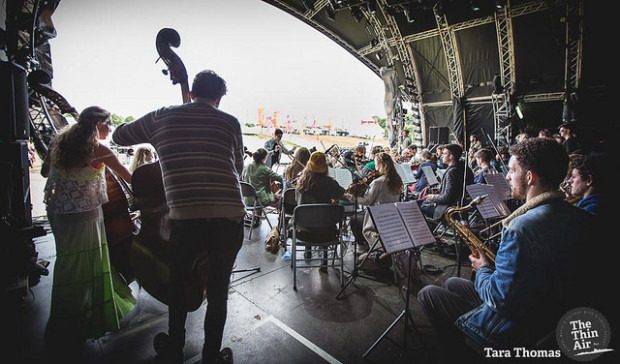 Back up and the jawing, thronging masses seem just as happy with the shuffle list as an artist’s set. That is until Waze & Odyssey make a clear impression with their pop sensitive brand of house music. Instantly the place is changed from shiftless half house to full on rave. And though a few participants may be shining a little too bright the majority is a homogenous blob of good vibes.

By 5pm the crowd is entering in earnest and weighing up their options. On the comedy stage there’s the totally unfunny Totally Wired while in the speakeasy Jarlath Regan gives a sobering chat on the highs and lows of the industry. At the Lighthouse stage Tensnake plays some mellow Ibiza house tunes while at the Original Stage fellow Germans Booka Shade play some 90’s style dance reminiscent of acts like Safari Duo but with modern hints of Simian Mobile Disco.

It’s a pragmatic truism that you’ll always find a new band to love at every festival. Today that’s Amsterdam native MC Melodee. Her traditional brand of old school hip hop bursts out with proto-crunk beats, soul and hip hop’s most pop-cessible moments. She instantly has the crowd eating out of her hand and with DJ EZD pulling out some Fugees style acoustic bass sounds it comes together like some of the bounciest tracks from the repertoire of Lauren Hill and Mos Def. 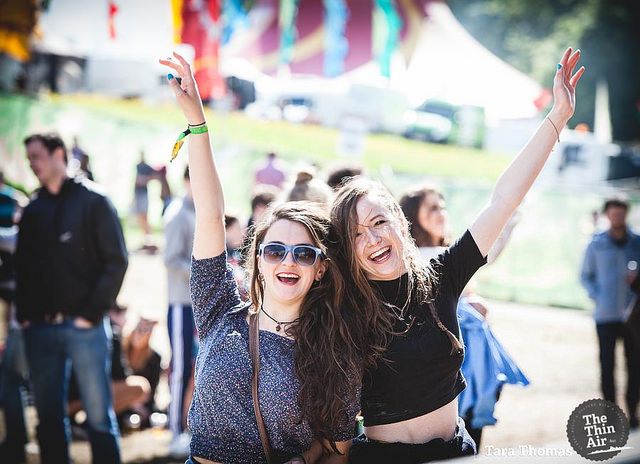 Nearby, rising star Maya Jane Cole takes the stage behind the smoke effect created by the tents heavy vape usage. Luckily her dub flavoured party set zaps right into the mind of the listener whether they can see her or not. The heaving, bouncing crowd all teeter on the edge of oblivion for the next drop and when it comes they ride it hard.

As the last rays of sun illuminate the littered and churned ground East India Youth, typically booted and suited, takes to the stage. His smooth demeanour is instantly shattered by a sustained wave of synth noise manipulated by his manic jerking fingers. His driving alt-pop translates into a raucous, powerhouse set. From spritely choruses to crackling dissonance to bouncy dance. The man offers up one of the most diverse and yet professional sets of the day, and all marked with a rich musical sensibility. 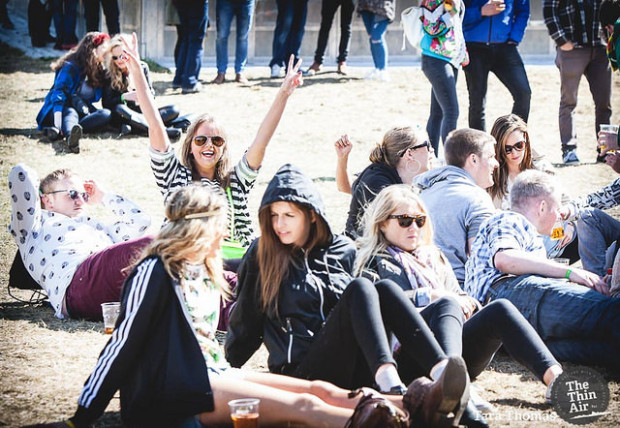 It’s been a good weekend for hip-hop fans. Planned right and you may have seen some of the US of A’s brightest and best. But Sunday belongs undeniably to Run the Jewels. Their brand of brash, ballsed up rap hits the crowd like social revolution. Though Killer Mike may look somewhat clipped with his right arm in a sling he has no problem delivering his growling, husky lyrics. El-p on the other hand is typically brazen in his American flag scarf and links the songs together with praise for the crowd and foul mouthed demolition of the establishment. Playing all their most grinding tunes from their two stellar albums the faux machoism gets everyone a little crazy and delivers what everyone expects from today’s most important rap duo.

When it’s over the half deaf, adrenaline soaked crowd join the steady migration out of the festival grounds. The proliferation of after parties in the city ensure the night is still young but for today it’s over. The festival on people’s door step has done it again and there’s no damp sleeping bag waiting at the end of it. Eoghain Meakin

Photo sets of Trinity Orchestra and Heroes In Hiding by Tara Thomas below. 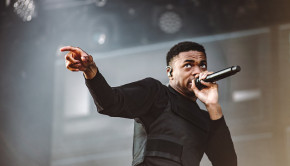 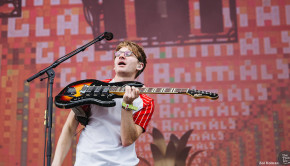 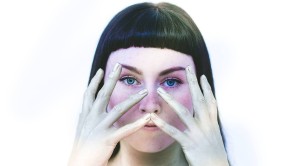 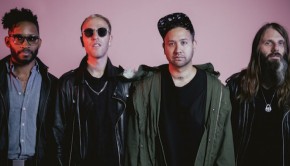