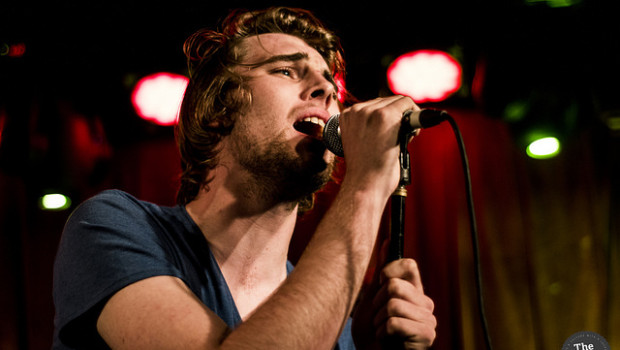 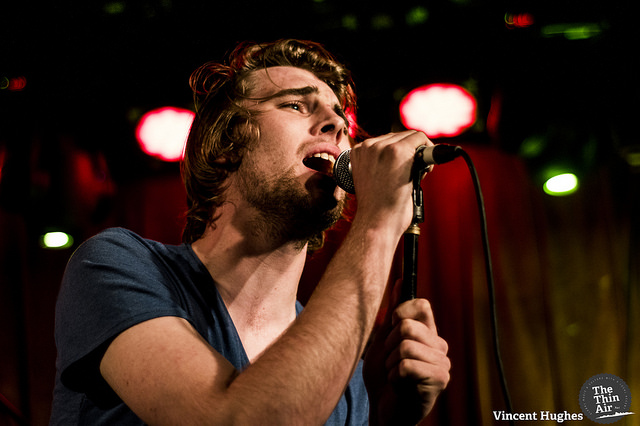 It’s been almost a year to the day since Girl Band played the Roisín Dubh. At that point the band had just released their seminal single ‘De Bom Bom’ and plans for an album were in a mere germination stage, the only thing that they knew for certain was that they would record it themselves and that it would be out in 2015. This being less than a week after the release of the massively anticipated LP Holding Hands With Jamie then, excitement levels are through the roof to see how the year has impacted the most innovative and exhilarating band in the country right now. Would burgeoning success have dampened their humble ferocity, their boyish sincerity? Quite the opposite in fact.

First to the stage though is Dublin crooner Paddy Hanna (below) who, on first inspection, may not have seemed like the most likely act to warm the already bustling crowd for the headliners. But when you think about it a bit more, it makes perfect sense. Both Hanna and Girl Band’s Dara Kiely’s songwriting techniques have been lauded for their unabashed honesty and humour, for casting the pretty cover from over the mental and emotional turbulence of simply being a person, and for not trying to camouflage the subsequent inner and outer weirdness with false sentimentality. While stylistically the songs delivered by Mr. Hanna and his band – including Trout Records head and SPIES guitarist Conor Cusack and No Monster Club frontman Bobby Aherne – are vastly more gentle on the ears than the next act’s, the sentiment isn’t necessarily different at all. Watching Hanna skitter, flinch and sharply inhale as if on the verge of being possessed while playing tunes from 2014’s LP Leafy Stiletto and 2015’s Austria/Camaraderie single is like watching someone on the end of their tether, clinging to the conviction of feeling secure. There’s a sense of knowing that there’s no shame in letting that tether snap. In his road testing of some new songs and his weaving through tracks like ‘Join the Army’, ‘Barry White’ and ‘Camaraderie’ we see a songwriter whose sound may be more akin to the likes of Doves or Elvis Costello but whose sensibility is entirely his own. 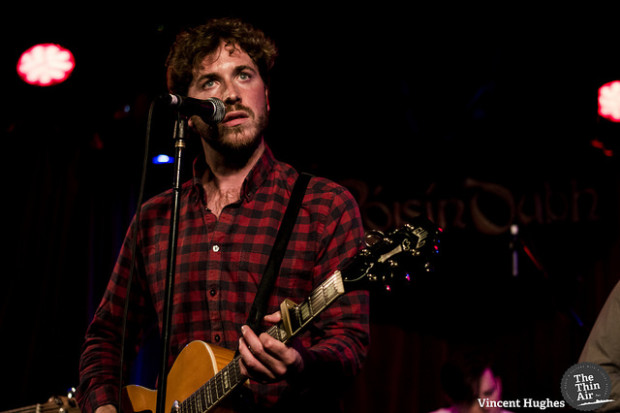 Paddy Hanna sings that “Everyone is terrified, some hide it better”. What both of tonight’s acts plan to do is to show that it’s okay not to hide the fact that you’re terrified. It just so happens that the next group of lads to step onto the stage are going to shove that fear and that reality so aggressively into your face that there will be no alternative other than to scream back at it, putting it back in its place. It’s a thrill to watch the Girl Band saunter onto the stage with the same menacing calmness that they had the last time they played here, the only real difference being that Dara Kiely is now sporting a crutch following a recent accident. The crutch is promptly abandoned as the band launch into Holding Hands With Jamie’s opener ‘Umbongo’, starting the show off with cacophonous drums, a guitar and bass combo that could soundtrack someone being chased by an axe-murderer, and Kiely’s vocals being introduced with a raspy croak, a brief whimper: “Got into a scrap with a pigeon”. 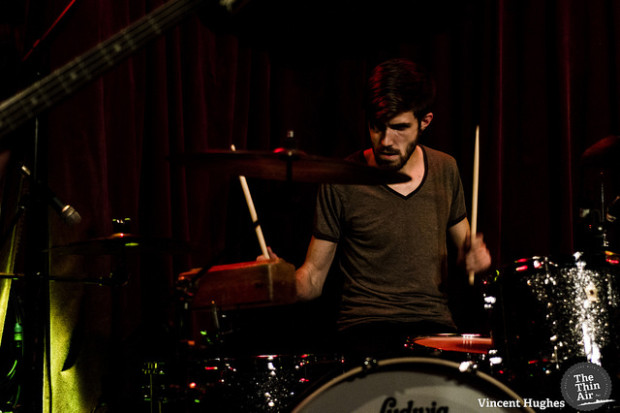 That tether of normality that Paddy Hanna dangled so precariously in front of our faces snaps violently and Kiely screams “Chicken Fillet Roll” repeatedly. The set continues to increase in intensity and the entire room is jittery and wide-eyed with mouths agape. The musical energy of Adam Faulkner’s (above) precise and abrupt drumming and the combination of Alan Duggan and Daniel Fox’s guitar and bass screams are channelled into Kiely who, weight pressed entirely on one leg, flails, flaps, screams and spits through material old and new. Ruthless, feedback laden tracks like ‘Pears For Lunch’, ‘Lawman’, ‘The Cha Cha Cha’ and ‘Paul’ leave the crowd in ribbons while the lack of direction or foundation in ‘Baloo’ maybe leaves a bit to be desired. What’s really noticeable is that the recording all of their material entirely on their own terms has resulted in the sound not differing at all when played live from how it sounds on record. The added bonus being that we can now see how the sounds are made. Fox’s bass regularly provides more ‘melody’ than Duggan on the guitar, who spends twice as much time scratching and scraping the strings as he does playing actual notes.  The result is violent, cathartic and just plain fun to watch. 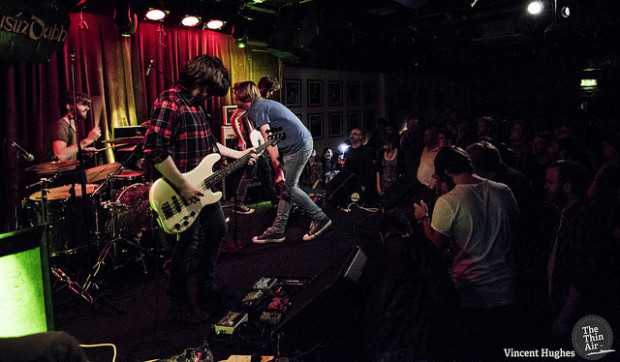 By the time closers ‘Why They Hide Their Bodies Under My Garage’ and ‘The Last Riddler’ are played both the crowd and band seem spent. There is no encore, as if to stop only to start again would have killed the trajectory of the show. The final line of ‘The Last Riddler’ is a sarcastic groan, “You’ll be grand”, perhaps a phrase thrown around a bit flippantly lately. What Kiely’s lyrics, and indeed Paddy Hanna’s before him, seem to say is that, yeah, you probably will be grand, but that doesn’t mean you should hide yourself from whatever periods of general shitness you encounter. Maybe that’s where Girl Band’s appeal is; upon that backdrop of madness, frenzied noise and chaos is the simple reality of being frustrated, of being pissed off, of being scared, of being manic and of being able to retrospectively laugh at the fact. The lyrics are daft and often incoherent, but that’s often how our thought processes and behaviours are. Girl Band show the darker, hidden processes of the mind with tongue-in-cheek brutality. It’s the self-conscious turned up as loud as it will go. Eoin Murray 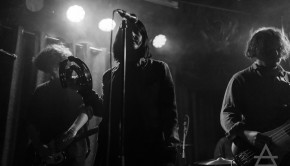