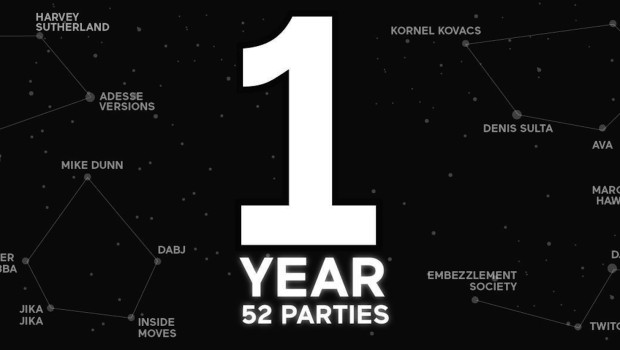 Preview: The Night Institute Turns One

This Saturday marks the first anniversary for The Night Institute, one of Belfast’s newest and most popular dance music fixtures (and very likely its best weekly electronic music event) at Aether & Echo. The night was set up in 2015 by the city’s very own Timmy Stewart and Jordan (the latter of which used to run the Nocturne parties at the same venue). Their fifty-second shindig, which is on this Saturday from 11PM-3AM, will take place at their regular haunt and cap off a journey through a rip-roaring past year which has earned The Night Institute a devoted local following.

To help get you in the mood, we spoke to the two residents DJs, Jordan and Timmy, and asked them to highlight some of their key tunes from the past twelve months. It’s fair to say you might hear a number of these played on Saturday:

Timmy: This was the first bona fide TNI hit, with people regularly rushing the stage asking, ‘WTF is this!’. Adesse Versions was invited as one of our first guests as a result!

Timmy: Man of the moment, Sulta, provided us with a few this year but every time I played this weapon [“Time 4 Prayer”] on Dixon Ave Basement Jams it never failed to raise the roof.

Jordan: Denis Sulta joined us on the street for one of the outdoor Block Parties just before he exploded. Anthems like Bucketheads’ “The Bomb” resulted in pure smiles, and we all [Denis, Timmy and myself] ended up going back-to-back in the club after. “It’s Only Real” is an anthem too.

Jordan: Chicago pioneer, Mike Dunn, using his headphones as a mic (Green-Velvet-style) and singing his own rendition of “Phreaky MF” at the end of the night to all the girls was one I’ll never forget. If you know the words, it’s pure filth.

Timmy: I’ll not forget Mike Dunn performing the rap from Phreaky MF Live to a row of girls singing it back to him in a hurry. Class moment.

Jordan: Eric Prydz’s Cirez D project from about 2004 spawned a TNI anthem in the form of “On Off”, and the regulars just wont let us put it to bed. It destroys the place every time.

Timmy: The Secret Squirrels edits are DJ gold and a good few were on heavy rotation, but no more than Eddy Grant getting the SS treatment. Everybody was feeling it – it actually felt like the crowd were on trampolines at certain points when this got dropped!

Timmy: Harvey Sutherland’s cover of Syclops’ “Where Is Jasons K” live on a Juno was spellbinding and it definitely raised the temperature in the street somewhat.

Timmy: It’s as much about digging out old gems as it is playing brand new promos, as we have those four hours every week to play with. We are fond of afro-house curveballs to raise cheers and arms – especially side by side with more hypnotic electronic stuff – and this old one I dug out from Martin Solveig did the trick on more than one occasion.

Timmy: ‘One more tune’ chants mean anything but a banger to us especially if the last few hours have been an intensely sweaty workout. I’ll never forget pulling this one out as the lights came on, with the whole room singing it back to me, and plus that drop (the breakdown and guitar solo) resulted in a mosh pit… haha.

Timmy: My solo tribute to Prince set was one I’ll never forget. A personal celebration of as much of his great music as I could pepper through a night, without losing the feel of a normal TNI party. I think it was both a sad and happy occasion for a good few. The amount of texts I received that day was phenomenal, as people were keen to know if he’d feature heavily that night – it must’ve been well-known how much of an influence he had been on me.

Timmy: DJ Haus diving into the crowd at the end of his set was definitely one of my highlights from the past year.

Jordan: DJ Haus told a friend The Night Institute was one of his favourite gigs in years, so much so that he ended up getting himself worked up with excitement until he crowd-surfed at the end of his show.

Timmy: Kornel Kovacs’ proper lesson in DJing made me feel like sticking L plates to my record bag. Weaving between techno, disco, acid bangers, and even R&B effortlessly. It was easily one of the best sets I’ve ever witnessed over the years.

The Night Institute Turns One Facebook event is currently sharing a stack of songs and reminiscences from the year that’s been for them. So that’d be the next port of call for anyone needing an extra primer before Saturday night. Until then, the team at TNI are hoping you’re all getting as excited as they are for their first birthday event.