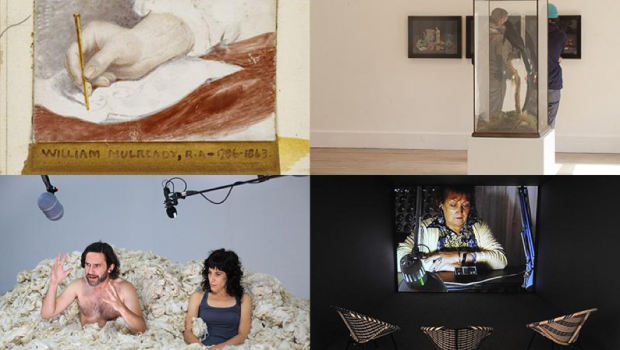 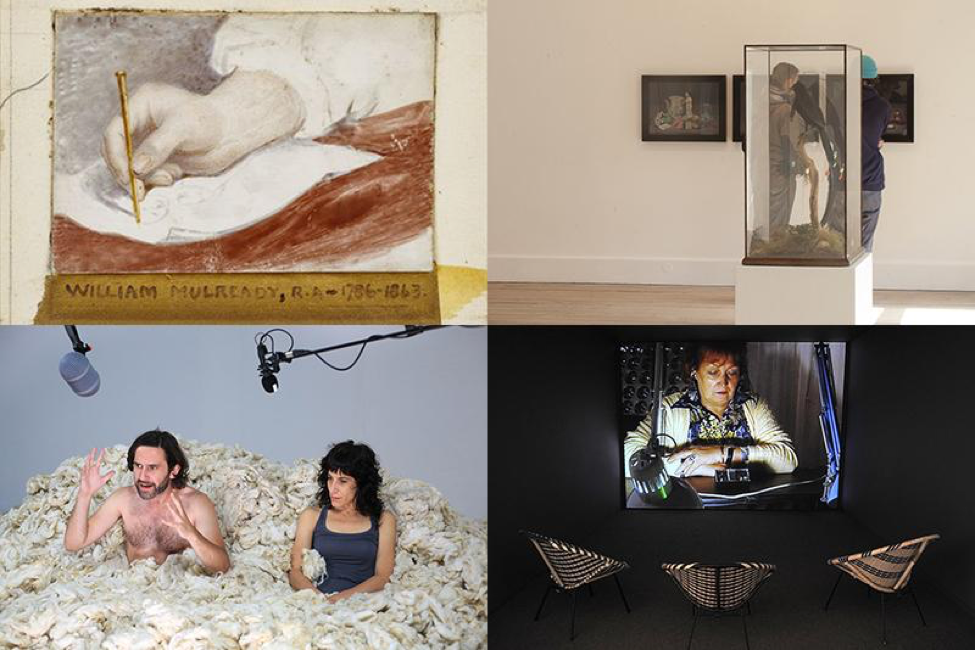 Most exhibitions, in fact most artistic presentations be they albums, books or films, rely on and in most cases are defined by the strength of the narrative that exists or is absent from their presentation. They ensure an audience is guided through the work and suitably poked in the right direction when needed or left to surmise when required. While this idea of a structural narrative is almost universally present in outputs, it’s realisation and presence can be a diverse as the types of works it links and flows between. It can seen conjoining two distinct and seemingly opposing stories via common threads in Dublin and Orla Barry’s Breaking Rainbows. In Sligo we see the absence of a defined narrative in the individual pieces of The British Council’s collection form the theme of the show. The narrative of an artist’s career arc is at play in Banbridge for a retrospective look at the works of Susan MacWilliam. While in Drogheda we see the ability exhibitions have to forge their own narrative through a strong theme and curation. When we judge the success of shows, films, albums or novels we critic either how believable the plot was or how emotionally connected we become to what we have witnessed. On this metric these four shows achieve their brief, they also surpass them in many other wonderful facets – but you be the ultimate judge of that.

Dublin: “The work strikes parity between the diverse avenues and discourses successfully, and the switch from live performance to wall projection sees none of work’s impact lose its allure.” 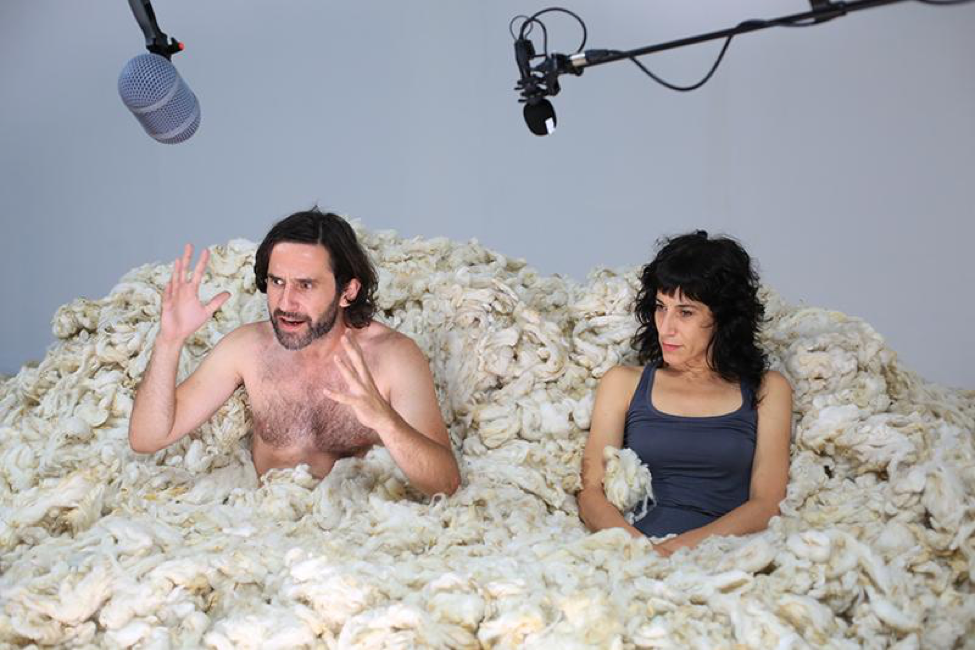 What’s first grabs your attention about Orla Barry’s latest show in Temple Bar Gallery + Studios is the wool. There’s a lot of it, 300kg to be precise, and it takes centre stage on the gallery floor, hemmed in by large fabric screens descending from the ceiling. Breaking Rainbows initially began its life as a theatrical performance, with actors Derek Devine and Einat Tuchman taking part in limited run during the Dublin Theatre Festival. A recording of this performance is now projected on the gallery’s back wall, with the wool methapmophasing it’s purpose from the performance stage to a sculpture in front of the projection. Barry herself lives a dual life as both an artist and a shepherd, with a farm in rural Wexford. Breaking Rainbows sees a balance between these two lives as tales of trips to farmer’s markets and successful sheep river rescues are interwoven with hard hitting commentary pieces on the plight of the earth as global warming continues. Despite this seemingly heavy tone, humour is rampant throughout the work with some pieces beginning life as a simple spoken sentence, in one case ‘frogs are female toads’, before multiple repetition sees them morph sounds and gestures. The work strikes parity between the diverse avenues and discourses successfully, and the switch from live performance to wall projection sees none of work’s impact lose its allure. If anything the transfer of wool from malleable stage set to sculptural piece echoes the dual existence the artist herself balances, and if the wool is our gauge point, it is done with assuredness and resilience. The narrative of striking balance between multiple ideologies and pathways in life knits this exhibition together wonderfully with the result being both humour inducing and thought provoking. 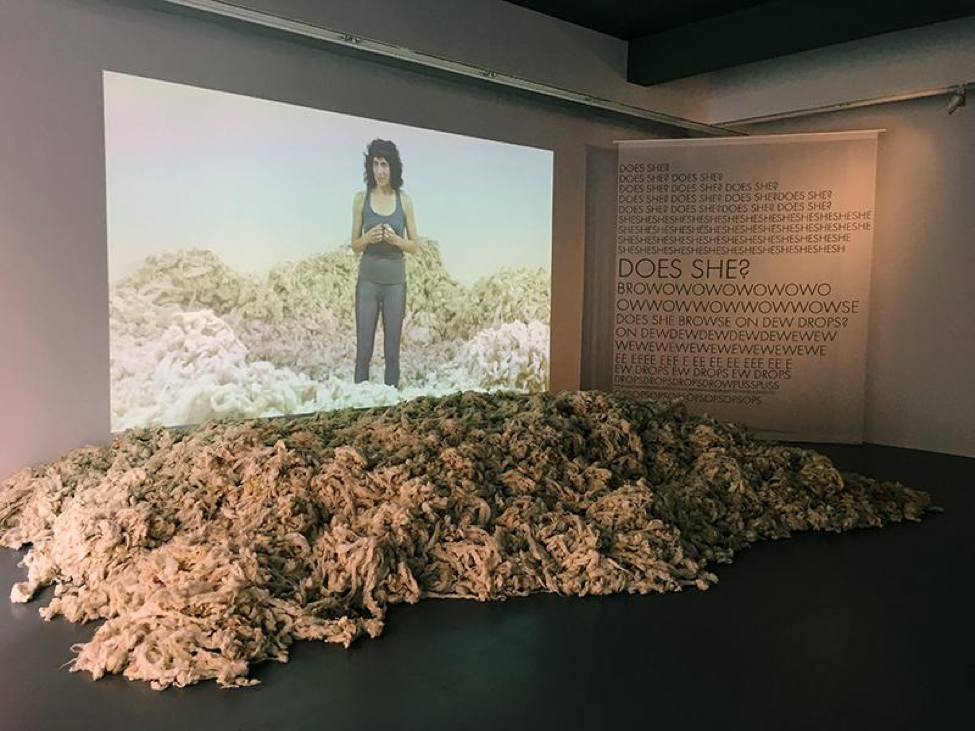 Sligo: “One of the quirks that arises from this process is the haberdashery of stories that exists within the works.”` 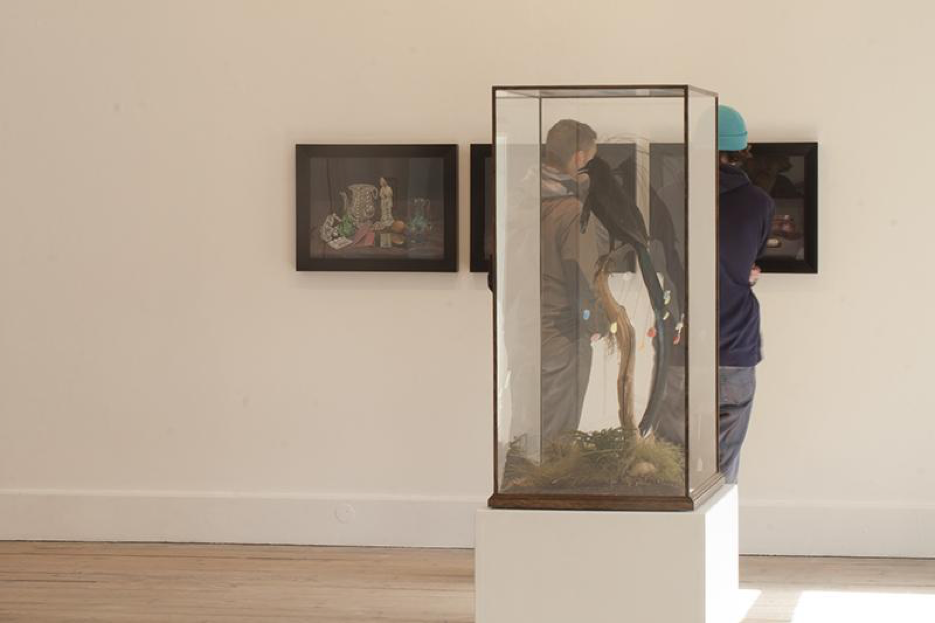 What: Ghosts of Other Stories: The British Council Collection
Where: The Model
When: 17th September to 27th November

One of the main functions of national galleries and institutions, alongside hosting works, is to catalogue and curate the artistic landscape before them in order to simultaneously grow their collection and preserve the movements and stylings of any given time. This process is a juggernaut of sorts, and while it may slow down it invariably never stops. The result of this is a cross-section of differing tastes, styles and disciplines, articulated via a broad range of mediums. The latest exhibition in The Model in Sligo draws on this theme and, in conjunction with The British Council, presents a specially curated show of the Council’s collection. Initially established by the Foreign Office in 1934 to curb the growth of Fascism through the promotion of British Culture, the institution has vastly expanded on that opening brief in the proceeding decades, and since 1938 has been collecting and preserving a litany of British and International art. One of the quirks that arises from this process is the haberdashery of stories that exists within the works. Narratives are suggested through individual pieces but cannot be fully expanded on without the presence of their brethren. Half whispers of tales exist, and it is this idea that lends itself to the show’s title Ghosts of Other Stories: The British Council Collection. The calibre of artists on show is not to be underestimated with German photographer Wolfgang Tillmans, Welsh painter Merlin James and British art collective BANK. As well as the main show, a daily showing of a series of video works by Film London Jarman Award nominated artists while be shown, including Elizabeth Price and Stephen Sutcliffe. With this strong showing of international artist it would be a crime not to take the time to get lost in The Model for an hour or two, you have until November 27th! 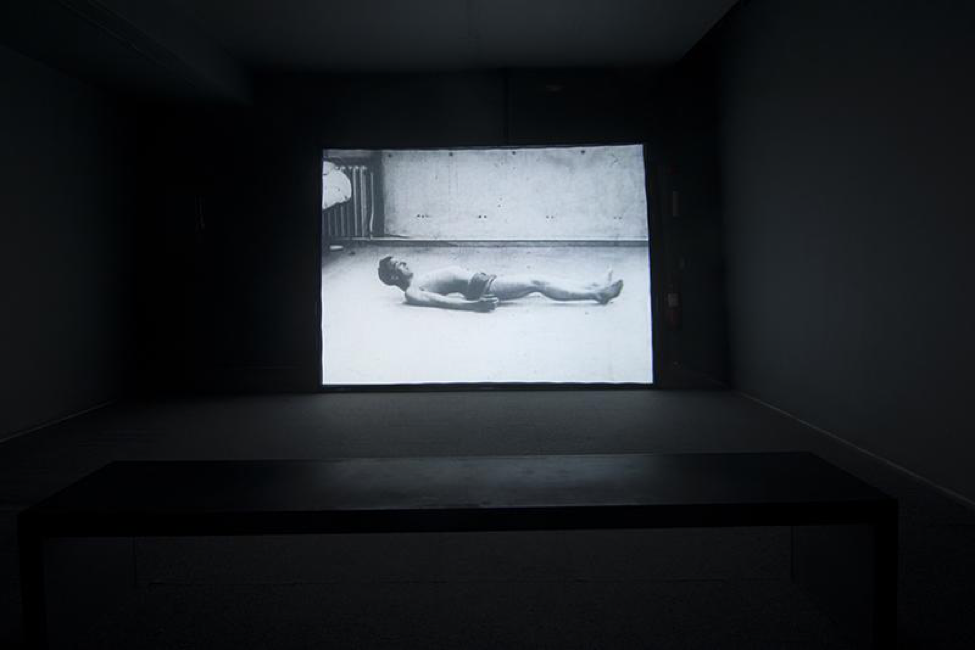 Banbridge: “The artist’s work primarily looks at topics on the fringe of established conventional thinking on science, an area that provides a wealth of dialogue.” 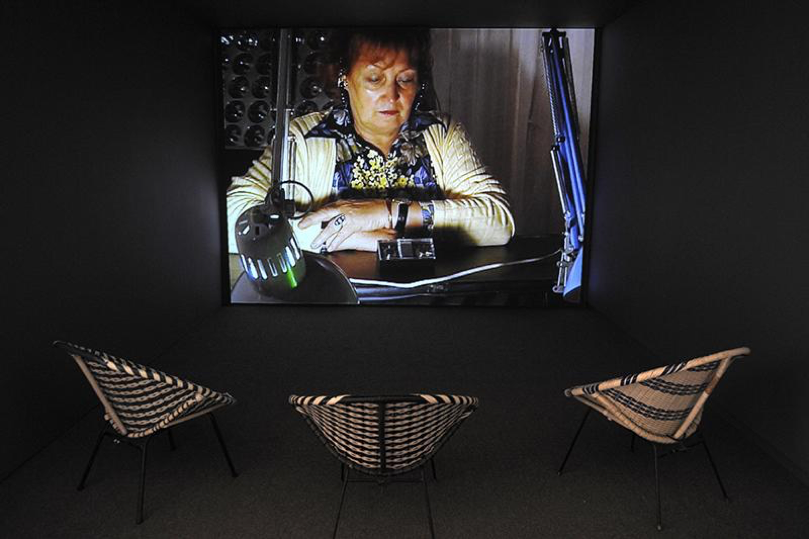 A retrospective look at the career of one of Ireland’s most intriguing artist’s Susan MacWilliam’s is currently on show in Banbridge’s F.E. McWilliam Gallery & Studio. While the exhibition, entitled Modern Experiments, will look at MacWilliam’s career as a whole, a focus will take place on her output since 1998 when she began using video as her primary medium. In total 15 pieces are on show including The Last Person from 1998. This work was a comment on the career and subsequent trial of Helen Duncan – the last person to be tried under the British Witchcraft Act of 1735 in 1944 – and saw MacWilliam’s shortlisted for the 1999 IMMA Glen Dimplex Award. Other highlights include 2014’s KATHLEEN and 2006’s Dermo Optics. The latter features footage of MacWilliam’s trip to see Madame Duplessis in Paris’s Centre d’Information de la Couleur. Duplessis’ research is into the concept of ‘dermo optical perception’, which is the ability to ‘see’ without using your eyes. MacWilliam’s documents the demonstrations and tests carried out during her trip, and the piece was chosen to represent Northern Ireland during the 2009 Venice Biennale. The artist’s work primarily looks at topics on the fringe of established conventional thinking on science, an area that provides a wealth of dialogue which MacWilliam’s expertly explores and ensures a narrative flows throughout this show. Modern Experiments is the result of a cross-border initiative between the Arts Council of both the Republic and Northern Ireland, and will tour three galleries in the south in 2017 – don’t miss the first chance to see it. 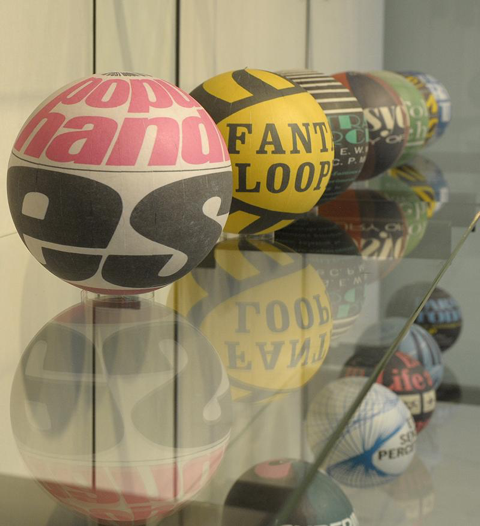 Drogheda: “This exhibition brings together a blend of emerging and established artists, with some artists making their inaugural show in Ireland.” 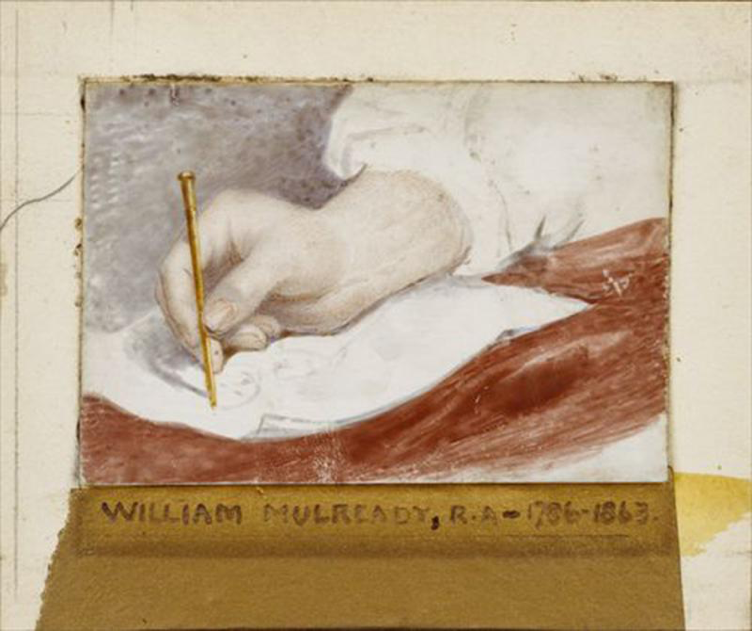 Some thing as Line – William Mulready

What: Some thing as Line
Where: Highlanes Gallery
When: 30th September – 5th November

William Mulready, and specifically his diminutive 6cm x 8cm painting Miniature of the Artist’s Hand, provides the departure point and structural narrative for the latest exhibition in Drogheda’s Highlanes Gallery. The show is entitled Some thing as line and sees a collection of 10 artists respond to the concept of ‘the line’ in contemporary art. Mulready may be best remembered these days as the man who designed the ill-fated Mulready Stationery (a set of stationery launched into almost universal ridicule in 1840 to coincide with the release of the Penny Black) but he was actually an accomplished and well-renowned artist during the first half of the 19th Century. His aforementioned miniature painting depicts a hand in the process of drawing a line from a sculpture onto an ivory surface. This concept of shifting mediums and a blurring of the endlife of a line was briefed out to the 10 artists who were then invited to submit works in response to this. The result sees a broad mix of returns with the notion of a line used across a multitude of works in many different facets. It forms part of sculptures, leads video pieces and in each case makes reference to ‘the hand’, akin to how Mulready portrayed it as being at the fore of his 19th Century piece. This exhibition brings together a blend of emerging and established artists, with some marking their inaugural show in Ireland. Open until the start of November, this exhibition showcases the strong ability for curatorial practices to shape and flow a collection of work, as as well as displaying a host of excellent artists, so be sure not to miss it. 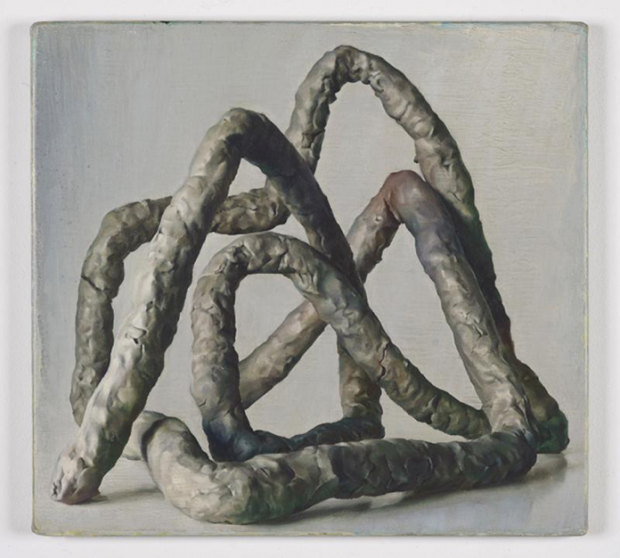 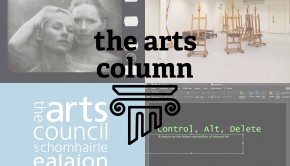