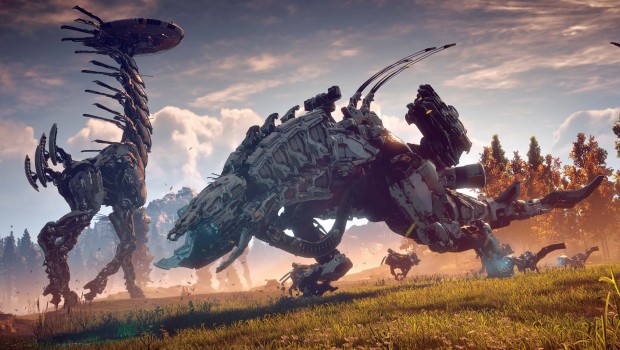 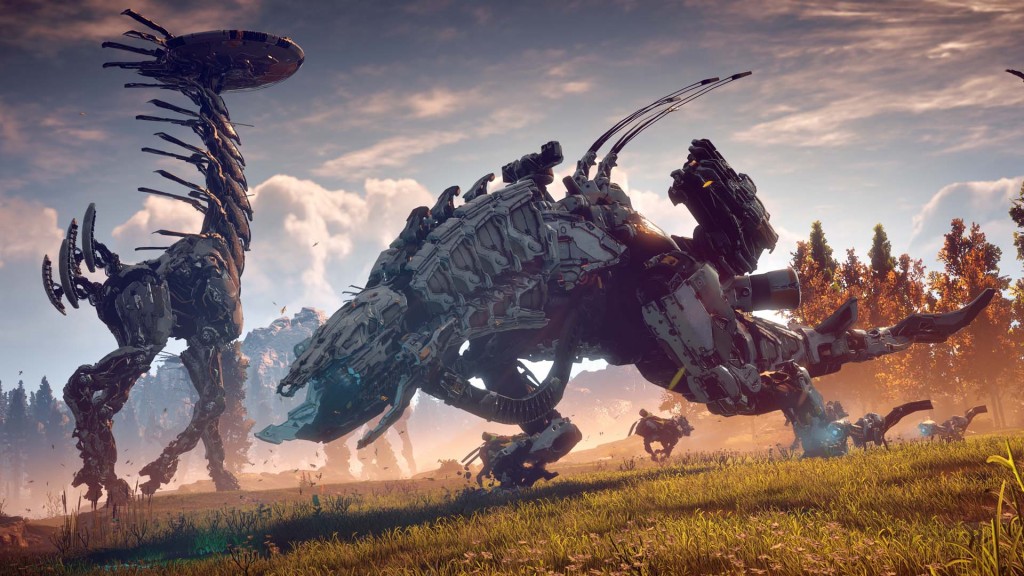 Let’s cut to the chase: Horizon Zero Dawn is fantastic. A rewarding, surprising romp set in a vividly realised open world that grows deeper and more engrossing the more hours that you choose to pour into it. Sure, at first it feels like a greatest hits compilation of bits culled from other, equally successful games. You can hunt wildlife and liberate bandit camps like in Far Cry, scale constructions and kill people from above or below as in Assassin’s Creed, and the expansive, varied game world has the depth and breadth of Skyrim. None of these are negative comparisons, of course, and it may sound counterintuitive but Horizon Zero Dawn is notably inventive. While the storyline sticks rigidly to Joseph Campbell’s well-used template of an orphan leaving their home to fight the Big Bad, it is the protagonist, Aloy, who imbues the game with real heart and verve. An outcast from her tribe, the lonely Aloy instead spends time in the forests and plains that surround her village, which are overrun with robot creatures equipped with mechanised limbs, glowing eyes and laser weapons. The culture clash is deliberately jarring: it is initially disorientating to discover a herd of cybernetic antelope grazing by a river or a lone wildcat skulking about in the long grass. However, it is soon revealed that this world, in spite of its tribal demographics and bartering system, is located one thousand years in the future after a mystery catastrophe has wiped out most of civilisation as we know it. The visuals certainly are striking: lush, green foliage grows over the charred, rusted remains of cars, buildings and rollercoaster tracks. “Ancient” artefacts such as digital watches and car keys suggest the existence of a society not too different to ours but one that has since gone the way of the dodo.

The presentation of the game world is excellent. The further that you explore, the more that you are gifted with a changing, varied landscape of primitive villages, snowy mountains and wide, open fields. The visuals are uniformly gorgeous, there is no slowdown, even when you are thrown into combat with a menagerie of robotic animals becomes. The creatures themselves, which grow larger and deadlier as the game progresses, are impressive. Some of them, such as birds or deer, pose little threat and help you to level up with experience points pretty quickly, but others, such as alligator-like “Snapjaws”, or any of the boss leviathans, are harder to take down. The strategy of shooting randomly is increasingly useless, and a much better tactic is to target different parts of the monster. This can be done through the use of a “focus”, a mysterious Bluetooth gizmo that can be used to scan environments for clues to crimes (like in the Batman: Arkham franchise) or to identify weak points. Cannons, for example, can be blown off an enemy and then wielded against their previous owner. It is very satisfying destroying a “Ravager” with its own gun.

Not all of the mechanoids are danger, however: a “Tallneck”, a docile brontosaurus, can be scaled and hacked to reveal the array of collectibles, cauldrons and corrupted zones in that area. The latter two offer more challenging trials with greater rewards – they can be punishing, for sure, but the spoils are essential for further progression in the game.

In the character of Aloy, Horizon Zero Dawn has a protagonist on a par with Lara Croft: engaging, empathetic and with credible motivation, she gives the game real heart. This is an area in which so many other releases fail: a videogame can only be powerful if the player cares about the fate of the avatar that they are controlling. If they have no connection, emotional or psychological, with the persona onscreen, then they are merely manipulating programmed pixels within a very strict set of parameters. Aloy, in contrast, has depth and a backstory that ties in directly with the environment. How that story plays out is never less than interesting, and the action that surrounds it is consistently exciting. Ross Thompson