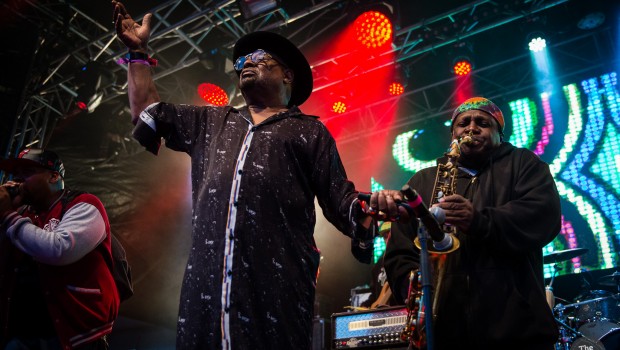 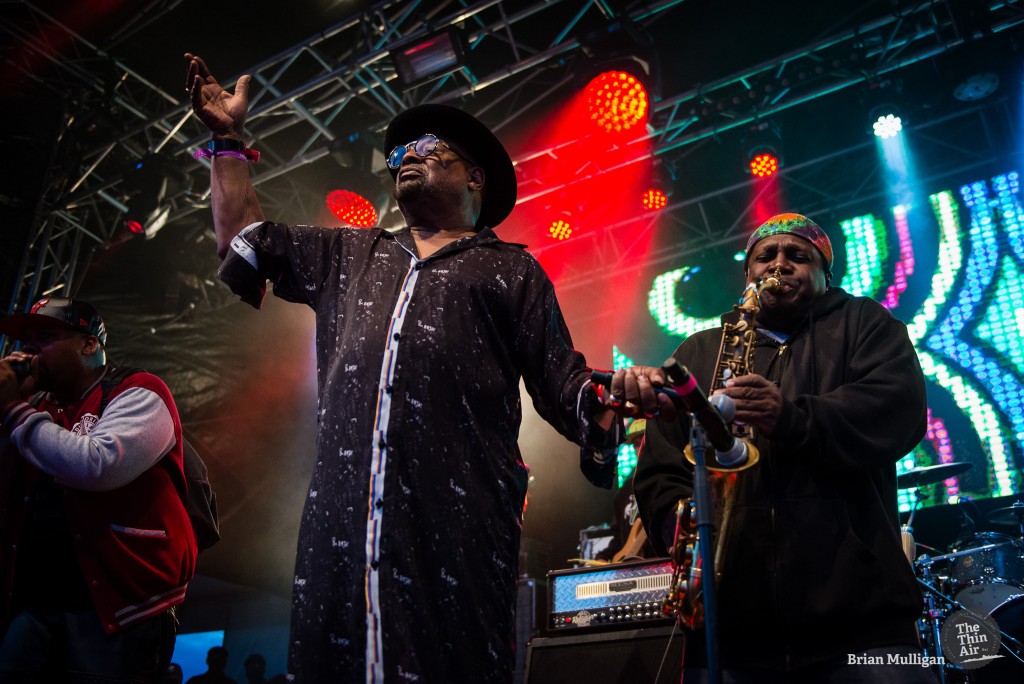 Since pulling psychedelic rock and pounding soul together and giving birth to funk in the late 60s, George Clinton has had arguably one of the biggest single influences on 20th century American music. In his 70s heyday he lead a revolving roster of fifty musicians (including the legends Bootsy Collins, Edie Hazel and Bernie Warrell), recording floor-filling pop as Parliament and Hendrix-esque guitar jams as Funkadelic, while creating outrageous stage shows that put other 70s arena-rock behemoths to shame. Prince and the Red Hot Chili Peppers (Clinton produced their sophomore album) carried on his work through the 80s, while early West Coast hip-hop borrowed hugely from P-Funk, creating massive hits for Snoop Dogg, Ice Cube and Dr Dre. While years of legal battles and hard drug use have taken their toll on the 75 year old, he’s now relatively clean and his recent live shows have been remarkably well received, with a Vicar Street date to follow next month. An engaging interviewee, he was open, funny, and remarkably undiminished in his enthusiasm for new music.

Hi George. Your most recent tour has been getting some of your best reviews in years. What do you put it down to?

Well you know, I got re-inspired: I’ve got all my grandkids up on stage with me, they’re like the next generation of the funk. It feels like a brand new group, the energy’s there. We got all the old members back playing the guitars and horns, so it’s actually a new vibe on stage.

So you’re coming into Dublin next month. What can we expect, setlist wise?

Yeah, well there’ll be a lot of the newer material, but a lot of the old standards as well. Depends, but if we get to play as long as want to, we’ll have a lot of fun!  This time it feels like 68, 69 again – the reaction has been so good because of the political climate at the minute. One Nation Under a Groove is relevant now more than it ever was before.

Yeah, so with so much hip-hop being political at the minute, thinking about Kendrick, Joey Badass, Run the Jewels, artists seemed more and more compelled to really make a statement now. You see yourself in the same way?

Yeah! We’ve got to make a statement with the social situation that’s going on. You know and guys that are doing it, Kendrick, and loads of others… Killer Mike, I had an interview with him. I worked with him on this new album, on a song about all the pharmaceutical and insurance companies, so there’s a lot of that kinda information being put to music, like in ‘69 and ‘70.

I was going to ask you about that interview actually. I thought it was fascinating how you were able to finance your own recordings when you started off, if not strictly legally (Clinton revealed that his band’s earliest recording sessions were paid for with $1.2 million worth of counterfeit money that he laundered through his barbershop). In a way you guys were pioneering DIY recording, in the same way that young artists promote themselves through the internet.

Well yeah, and now we’re using the internet as well. The last album, First You Gotta Shake The Gate, it had 33 songs on it, and we put all 33 on YouTube. No radio station’s going to play a 75 year-old’s song, so you have to find new ways to get it out to the public. Working with Flying Lotus, Thundercat, Kendrick Lamar and all those people, that’s the new route. So yeah, I’ve no problem with finding new ways of getting our stuff out there- we financed this new album ourselves, we didn’t use a label, we did the video ourselves, with the help of Ice Cube and Kendrick. We were really able to do it the same way as we did with Maggot Brain and all that stuff in the 60s.

I think a big reason why your music still remains so fresh is how you were never tied down to one genre. Do you think at the time though, not quite being a rock, or RnB band, worked against you, in terms of airplay and label support?

It did, it cost us at the time, but in the long run, like The Grateful Dead, the fans that do like it really stay with you. Like our fans put so much of our stuff up on the internet, in the same way that the Grateful Dead fans made records of the shows. You know, our fans can tell me more about our songs than I can remember, and it keeps the music alive. Because we’re not tied down to one style, we’ll play an old song completely differently to how we played back then, so we keep moving with our audience.

I suppose we touched on this earlier a bit, but it wasn’t until I went back and listened to a lot of the early hip-hop records, especially Ice Cube, Dre and Snoop Dogg, that I realised how much your samples kept coming up, time and time again. But unlike a lot of guys from your generation, you were always very open to it, and now you have rappers as part of your live set. Did you always see rap and hip-hop as the logical extension of what you guys were doing?

Yeah, well we called it the DNA – you know, funk is the DNA for hip-hop. The fact that they called it sampling… We put out a record called The Clones of Doctor Funkenstein, it’s actually cloning funk, you know? You could hear it coming, cause we used to copy the sounds of other musicians, and they took our music and actually made new music with it. DJs were being phased out of the radio, so the put DJs on records, the same way we did with Mothership Connection. So yeah, we knew that was coming, and that we should be close to the kids that are coming behind, cause they’re always after new shit, and if you want to stay around, you have to listen to them. You can’t hate on them cause they’re moving you out, you have to embrace them and help them with what they’re doing, and they do the same by giving thanks to you: what Ice Cube did for me was what I did when he started.

So these days, working with guys like Kendrick, Flying Lotus and Thundercat all tipping their hat to you, and even a huge hit like Uptown Funk owing a lot to your sound. Do you see these guys as carrying on your legacy, then?

Childish Gambino, Thundercat, there’s a lot of them out there… what’s the name of the kid from Chicago?

Chance! He used to open up for us when he was in a band called Kids Nowadays, and I was telling them they were gonna be big. I mean, they just changed the name to Chance The Rapper now, but his family were a good band for a long time.

I was going to mention Chance to you: he’s headlining festivals and releasing massive albums with a label, which I think owes something to your approach.

Yeah. I’ve been trying to do the same thing, cause the record labels have played themselves out by robbing everybody. You can’t go to court with these guys, all the lobbying and all that, they know how to do it. So we have to do it ourselves: we’re making our own documentary, and our own music, and as long as I’m doing that I’m happy, and I’ll continue to fight for all that other stuff in the meantime. 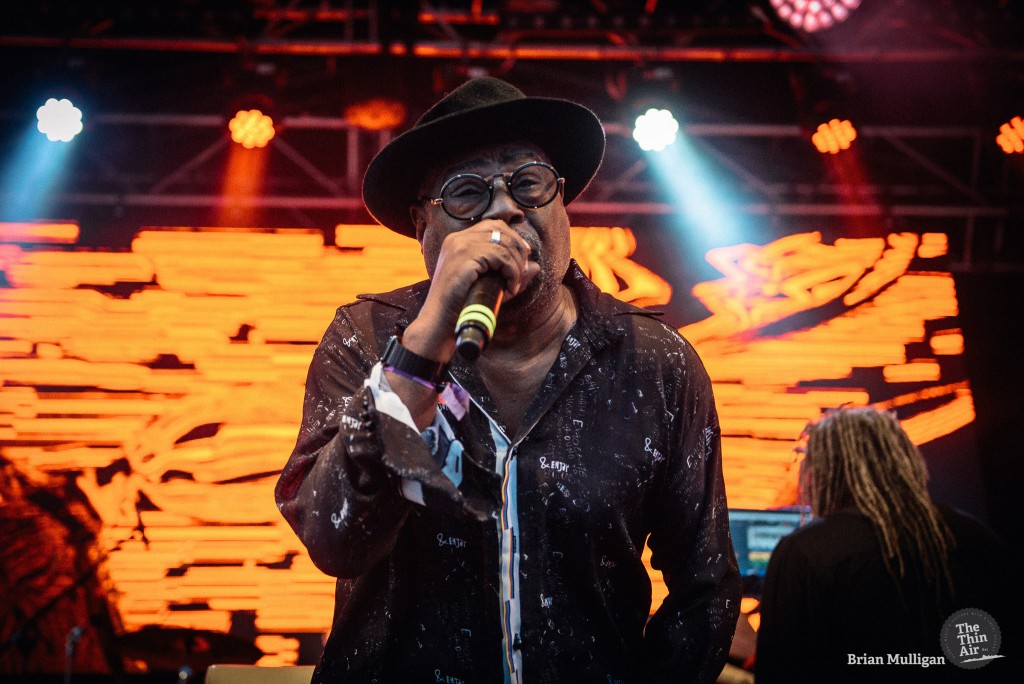 In being such an icon, you’ve being able to work with so many other great musicians: Bootsy Collins and Edie Hazel in your own band, Sly Stone, The Red Hot Chili Peppers, and a who’s who of rappers through the years. Who stood out for you, particularly?

Well, Sly Stone obviously. We got him to put something out. He’s great to produce, he’s so funny… I always try and get Sly Stone and Rakim together. Or Rakim and Eminem, I’d love to see that as well.

What were the Chili Peppers like to work with?

They were fun, they were like my kids: they actually went to school with my son. They were always like little Funkadelics, and when I still see them they’re really fun to be with.

Do you ever get the sense that people like the Chilis who grew up with your music are intimidated when they start working with you?

Some of them are, but I try to put them with ease, cause I’m pretty easy to work with. Once you get past that, we get on really well.

Well you’ve been easy to interview as well George, thanks very much.