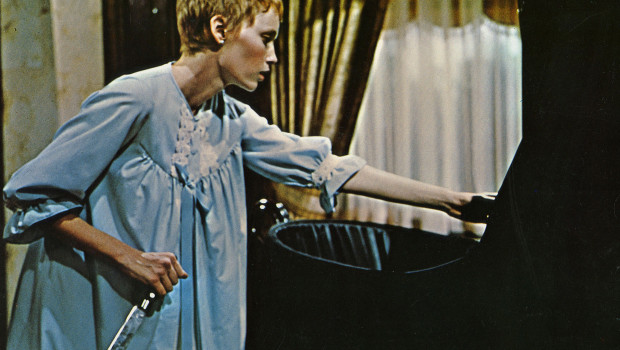 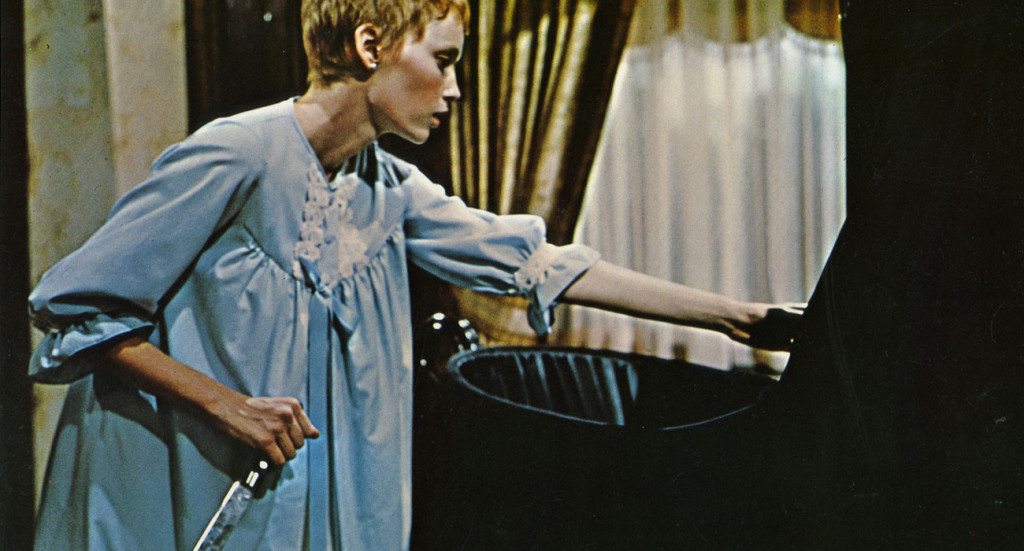 Horror is about the violation of boundaries. To keep life tolerable we parcel up the world in our head, organising experience into handy categories, and the most familiar genre icons signal their disruption: alive/dead (zombies, Frankenstein’s monster), old/new (The Mummy), reality/dreams (Freddy Krueger), animal/man (werewolves). The puss and blood and inside-out, syrupy mess of body horror speaks to a primal fear about the loss of identity and self.

Roman Polanski’s 1968 horror classic Rosemary’s Baby, adapted from Ira Levin’s hugely popular novel and screening in the Beanbag Cinema tonight, is organised around a series of boundary violations. Some of these are obvious and grotesque, like the Dark Lord’s rape and impregnation of the meek, drugged-up Rosemary (Mia Farrow), cheered on by next door’s Castevet couple and their weirdo, middle-aged cult friends. But others are ordinary and banal; keyholes, locks, secret passageways and the steamrolling politeness of people who won’t take no for an answer.

Forty years later, the film’s occult material is less shocking, but part of what keeps Rosemary’s Baby chilling and perfect is how it builds the sulphuric atmosphere of besieged paranoia by putting the poor Rosemary under a persistent, disorientating set of relatable domestic pressures and (micro)aggressions. In one scene she’s lounging with a book in her proud New York apartment, away from her actor husband Guy (John Cassavetes), when her alone time suddenly interrupted by the doorbell. She looks through the spyhole, sags silently in disappointment, and opens it for Minnie Castevet (Ruth Gordon), who has brought a friend to meet the lovely young couple who have moved in next door. They invite themselves in, plonk down in the living room and take out their knitting for a girls gab, while Rosemary tries to hide her misery. Like a vampire, once a nosy neighbour crosses the threshold, they’ve got you.

Levin’s thrillers and satires detail the persistence of archaic or surprising forms of evil in the modern world: in The Boys from Brazil Hitler’s genes survive thanks to a secret Nazi cloning program, nursing the potential for a Reich revival; in The Stepford Wives the glossy surface of small-town feminine cheer hides an animatronic program of fatal substitution. Part of Rosemary Baby’s genius was its relocation of Satanic horror to a respectable city locations (the opening crane shot of the Bramford complex’s rooftop spires echo Transylvanian shapes), a transplant strategy present, later, in the folk horror bizarrities of The Wicker Man.

Apart from some brief and blurry glimpses of hell’s landlord himself, the evil of Rosemary’s Baby comes in the smiling shapes of bourgeois life: the charming but secretly awful husband; the friendly, pushy old couple next door; the respectable medical professionals who hand out pills and diagnoses and reassure you that everything’s fine even, inside your belly, an apple-sized Antichrist is spouting ten tiny claws. 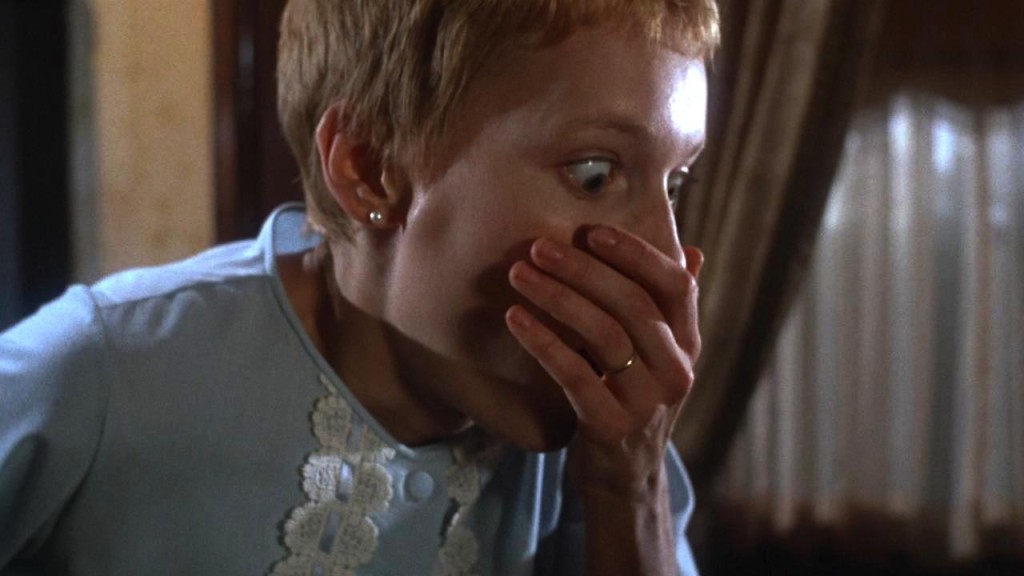 Ruth Gordon and Sidley Blackmer are fantastic as the Castevets, especially Gordon. They wear the pregnant Rosemary down with unrelenting assistance, prepping her for the unholy childbirth to come: they make her herb smoothies to drink, give her a strange-smelling mould necklace to wear and switch her to ‘the best doctor in town’. And all without a hint of malice, motoring along with friendly, persistent, we-know-best enthusiasm. Again and again, Rosemary is too polite, overwhelmed or unsure of herself to establish boundaries, to refuse, or to suggest alternatives. Dr. Saperstein tells her not to read books and worry her pretty little head, and Rosemary laughs and agrees. She is conditioned to play nice, trust authority, especially that of men, and the deeper she gets, the more the viewer screams at her to wake up.

Putting the Satan stuff aside, Rosemary’s world contains an uneasy acceptance of everyday coercion. On Rosemary and Guy’s scheduled baby-making night, she is knocked out cold, her impregnation experienced in dreamy half-consciousness. She wakes up with the damning evidence of scratch marks, but her husband brushes them off as just a bit of domestic sexual assault. ‘I didn’t want to miss baby night’ he shrugs, putting on his shirt. ‘I was a bit loaded myself’. When she gets a pixie hair cut she gets a ‘you paid money for that?’ reaction from Guy, bristling at the suggestion of non-feminine modernity. As the conspiracy intensifies and Rosemary gets closer to the truth, Guy chalks her panic up to ‘hysteria’ and coos that ‘he would never let anyone hurt you’, ‘cos the Devil only raped her in her sleep so that doesn’t really count.

Rosemary is trapped not just by the machinations of the coven but by the things she thinks she should want: a husband, a baby, a well-decorated apartment. The husband offers her womb in exchange for success; the baby attacks her from inside; the apartment locks her away from the help of the outside world. The final stretch of the film is air-gaspingly tense, as Rosemary tries desperately to put the pieces together and make an escape, before the coven intervene and stop coding their aggression: she’s hunted, grabbed, held down and tied up. Cut off from any support network, gaslighted by her husband, body violated, Rosemary’s plight is one recognisable to any spouse suffering from abuse and control, unable to articulate what exactly is wrong, but haunted by the gnawing impulse that this isn’t how things should be.

The ending remains doubly horrifying, the macabre fatalism of the Antichrist’s arrival twisted further by Rosemary’s reaction, switching from aghast horror to faint motherly acceptance. The irony is similar to the conclusion of The Stepford Wives, where the husbands straight-up don’t care that their wives are being murdered and replaced with submissive Westworld hosts, because at least a talking doll doesn’t nag. The horror here isn’t the presence of evil in the world, but the willingness of ‘ordinary’ people to tolerate and invite it, because it’s easier, or they’ll get something out of it. Seeing her world-destroying half-son in his midnight-black pram, internal reservoirs of material care kick in and Rosemary is snared, once again, by the things she has been taught to love.