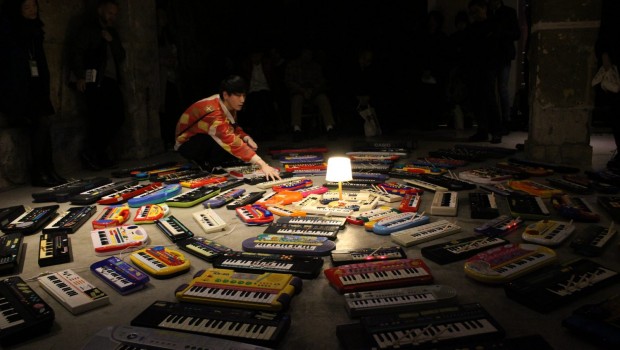 100 Keybaords: An Interview With ASUNA Asuna is a pioneering Japanese sound artist set for this year’s Belfast International Arts Festival to perform his latest mind-bending live creation, 100 Keyboards. The project involves playing the same key on 100 battery-operated keyboards at once, building a sonic moiré effect which must be heard to be believed.

Ahead of the shows, we caught up with Asuna to discuss the birth and genesis of project.

Take us back to before you devised the idea of 100 Keyboards. What creative activity led you to the moment where you envisioned this unique sonic presentation?

Thank you for the question. I was making music with a computer around the end of the ’90s. Those techniques made it possible to treat sound and frequency visually like a microscope. Technological evolution brought with it a new methodology of thinking and a new viewpoint. At the same time, I was also playing lo-fi experimental punk music in a band. These extremely different interests gave me a distinct point of view on the conceptual and physical effects of the phenomenon of sound. I think these various experiences from when I was a teenager are reflected in my performance of 100 Keyboards. It can be said as a listening experience like a visual ‘fluctuation’ like those seen in Bridget Riley’s paintings.

And, when I was a teenager, I was influenced by the viewpoint of WrK (whose members are: Minoru Sato-m/s, Toshiya Tsunoda, Jio Shimizu, Atsushi Tominaga, Hiroyuki Iida) which is a legendary Japanese contemporary art group from the ’90s. There is no direct relation between them and the performance of my 100 Keyboards. However, I was inspired by them. They were an artist group making methodologies like Alvin Lucier’s more radical.

How many keyboards were you in possession of when you came up with the idea, and how did you go about accumulating the rest to make 100 keyboards?

When I started this performance about 15 years ago, I started with around 20 keyboards. Before that, I had been collecting cheap keyboards since being a teenager. So it was spontaneously that the number of keyboards exceeded 100.

Most of the keyboards I use are cheap toy products, mostly second-hand, a lot have been rescued from the street and hard rubbish, flea market, and there are also many keyboards that friends have given me.

This works are not mere minimal drone music of 100 keyboards. My viewpoint is the complex resonance generated by these toy keyboards and their interference frequency. Of course, those complex phenomena required nearly 100 toy keyboards. The number “100 Keyboards” is just a title.  I sometimes play at around 120 keyboards in Japan. The note and resonance varies depending on the performance space/rooms, so it changes each time.

Of course, getting a production like this to work must have required a lot of trial-and-error. Did you spend a lot of time working with the instruments?

At first, I played drone sound by plural keyboards from a mere musical point of view. After that, I discovered the physical phenomenon of sound that occurs because it is a battery-driven, cheap keyboard. For those keyboards, the tuning of each is subtly different. There are things that cause the moire phenomenon to occur. Since the keyboard being played is a cheap product or most of what is made as a toy, the sound and tuning of each is slightly shifted or the transition of unstable sound due to the strength of battery driving through it may show. And when those sounds overlapped a lot, complex interference sounds and resonances in the space create different sounds and loops of undulation for each dense position. I noticed that phenomenon early. However, it took many years to get to the current performance.

Different rooms obviously make for different acoustic environments. How much preparation do you have make in advance of a performance to make sure everything is right sonically?

That’s right. Each room has its own frequency and reverberation that the place has. I check and search it in advance and try to play with a different note for each place. However, the pitch and note is not important. The important thing is the complex interference sound phenomenon listening there. It doesn’t take much time to check the resonance, but it takes time to place the keyboards for interference sound.

From the footage the performance that I’ve seen, the keyboards are all placed in a specific way where they’re all head towards a source, right in the center. Is it important, in terms of remembering what to play and when to play it, for the layout to be the same every time?

Yes, the keyboards are all placed in a specific way. However, here they’re all head towards, right in the outside from center. The layout of the keyboards and the order in which it sounds will vary depending on the space. During the performance, I choose each keyboard sound while listening to the reflections and phenomena of those sounds.

The sounds vary depending upon one’s location in the performance space. Seeing as the audience is encouraged to move around, to what extent do you consider 100 keyboards an interactive piece?

I think this work is a performance that makes sounds intricately distributed in the space, each creating a textile of sound phenomena with the individual ears o the audience.

Do you have any stand-out memories of performing the show to date?

More than 10 years ago, I was touring in Japan with musician Greg Davis who runs Autumn Records in Burlington, USA. At the Niigata show at that time, I played the performance of early “100 Keyboards” concept with around 35 Keyboards. Of course, I had been playing a similar performance in Tokyo before that. However, I was mentally breaking when I lived in Tokyo. So I had no confidence in my own work and everything. But after the Niigata show, Greg Davis recognized my keyboards show. I was able to continue this performance with a kind word from him. And I also thank the Belgian label “Meeuw Muzak” for planning the 100 keyboards tour first in Europe.

About focus on the sound and its phenomena in the show, it will be a concert in Salford, UK last year. The venue was the site of an ex-refrigerated warehouse and the sound reflection was very interesting.

What is it that you strive for when performing 100 keyboards, most of all?

I am listening carefully so that interference of those sounds creates complex resonances. In this site specific listening experience, I would like you to listen to subtle variations of sound interference and resonance that vary based on your location in the performance space. and I would like you to listen by changing the direction of your ears and/or while moving around the keyboards. Complex interference and resonance in the space can reveal different sound beats and loops between minute changes in position. I hope listener to listen carefully to the phenomenon of those sounds and if you discover the experiences of new sounds in each.

Presumably, you’ve made your way through quite a few batteries since performing 100 keyboards?

Batteries can be used repeatedly on my performance, so they don’t consume so much. However, when you have to leave the battery at the venue for transportation etc. they are all batteries that can still be used effectively, so I ask to reuse them. I’m really looking forward to the Belfast International Art Festival since I’m going to Northern Ireland for the first time. Arigato.